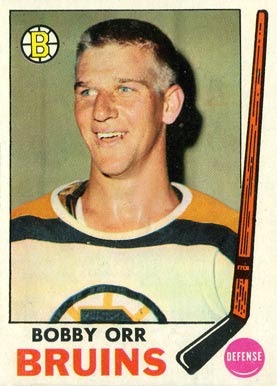 I'm not sure there is anything I can say that will adequately describe Bobby Orr. As a Ranger fan I know I was supposed to 'hate' and I'm sure I said I did back in the day. But truth be told I doubt even the staunchest Blueshirt Believer would have hesitated to sell his own mother to slave-traders to have Orr on Broadway.

Orr changed the way the game was played. He did stuff with the puck that no defenseman had ever done with it. Like going end to end on the ice and leave opponents wondering what the hell was going on. Don't believe me? Ask anyone that saw him play. It's a great shame that his knees took so much abuse and took such a toll on him.

This is the 1969/70 O-Pee-Chee Bobby Orr. I only wish the card looked as good in my hand as it does in the scan. You can see the fuzzy borders. Why do so many O-Pee-Chee cards look like they were cut from sheets using a butter knife? And the corners are not as sharp as they appear but overall I'm glad this card survived. I had completely forgotten I owned it and went out an bought a 72/73 Orr a couple of years ago. I guess you can't have too many Bobby Orr cards. 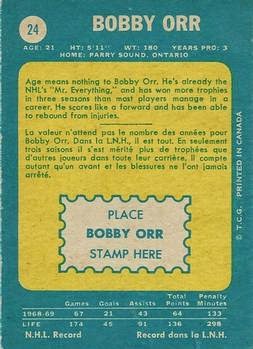 Pick a video to watch. This one features music by Carly Simon.


Here is one set to a song by Creed. Creed? I haven't thought of Creed in a decade.

This one has his Top Ten highlights.


Or go find Legends of Hockey Bobby Orr on YouTube. It's a three parter and well worth the time.
Posted by Commishbob at 5:30 AM