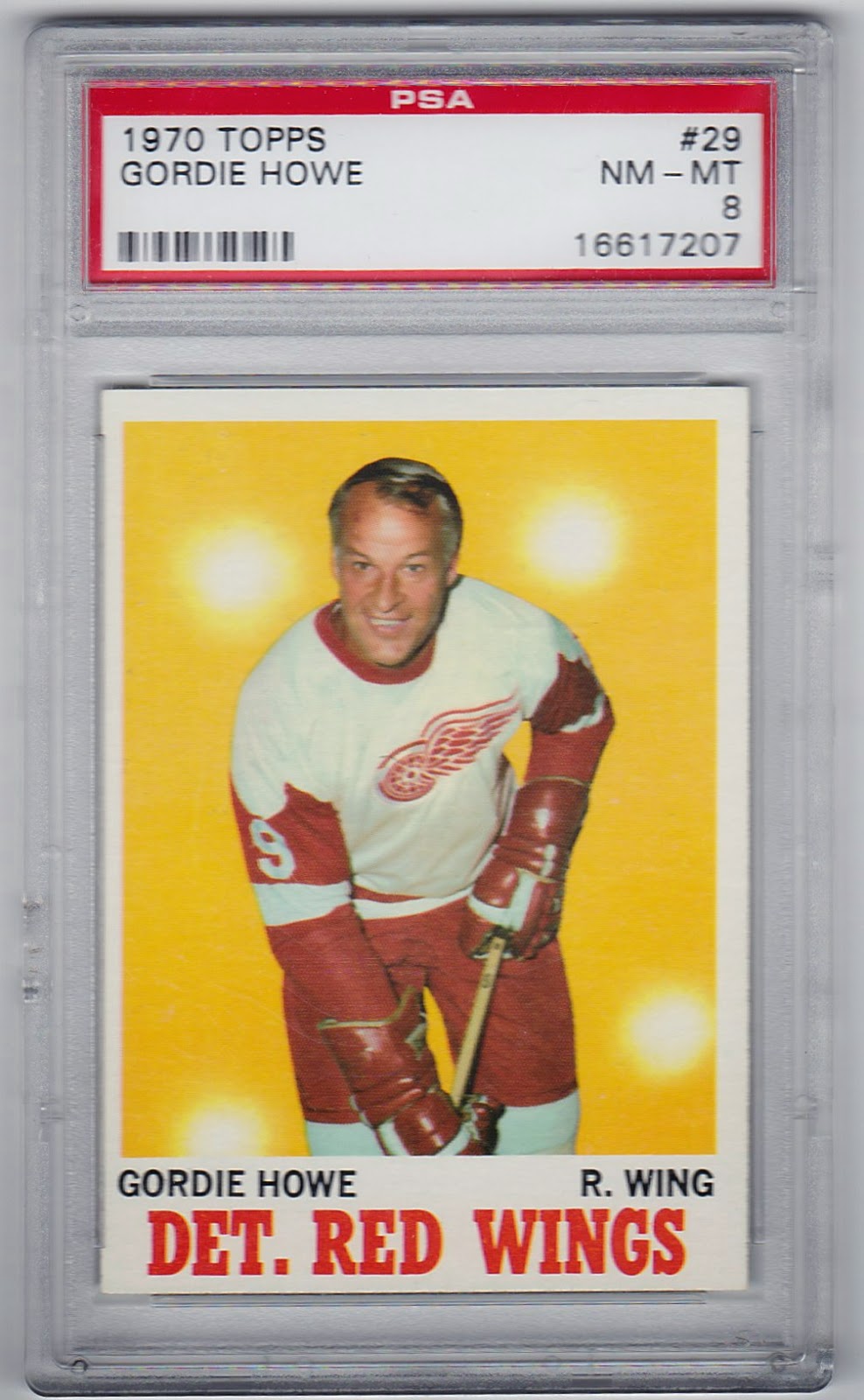 There is a rarity, a card I've scanned while it is still in a plastic tomb. Funny thing about this 70/71 Topps Gordie Howe, I just don't have the heart to crack it open. Maybe I will after I've looked at it awhile longer. It's just such a beauty!

And obviously Ol' Gordie holds down the Detroit (red) wing (pun intended) of the My Favorite Original Six players. Hell, he's Gordie Howe, isn't he? He could do everything there was to do on ice. He scored tons of goals, passed the puck like nobody's business and would put you into the boards with his elbow just to see how much you liked it. 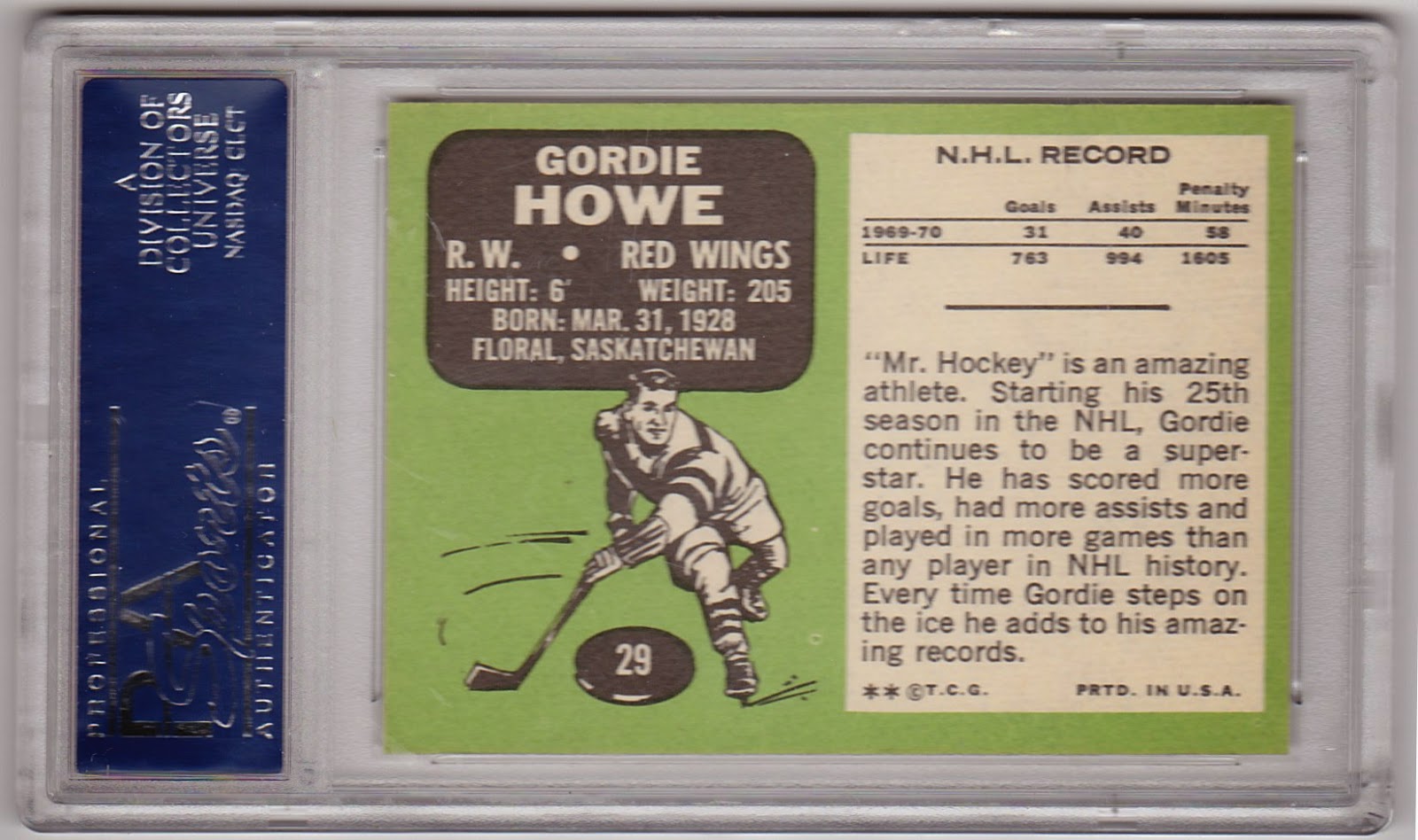 The 'Gordie Howe Hat Trick' consists of a goal, an assist and a fight in the same game. I don't know if I've ever witnessed one in person but it's a funny concept. Here is what Wikipedia has to say about it:


In ice hockey, a Gordie Howe Hat Trick is a variation on the hat-trick, wherein a player scores a goal, records an assist, and gets in a fight all in one game. It is named after Gordie Howe, well known for his skill at both scoring and fighting.The first known Gordie Howe hat trick was achieved by Hall of Famer Harry Cameron of the Toronto St. Pats on December 22, 1920. The namesake of the achievement, Gordie Howe, achieved a Gordie Howe hat trick only twice in his NHL career. Howe got his first Gordie Howe Hat Trick on October 11, 1953 when he fought the Toronto Maple Leafs' Fernie Flaman, assisted on Red Kelly's goal, and scored his own. His second happened on March 21, 1954, once again versus the Maple Leafs. Howe scored the opening goal, assisted on two Ted Lindsay goals, and fought Ted "Teeder" Kennedy.According to the Society for International Hockey Research, the all-time leader in Gordie Howe Hat Tricks is Brendan Shanahan with 17, Rick Tocchet has 15 and Brian Sutter with 12. The active leader is Jarome Iginla of the Boston Bruins with 9.A double Gordie Howe hat trick occurred on January 10, 2012. Adam Henrique fought Jarome Iginla. Iginla recorded 1G, 2A while Henrique recorded 1G, 1A. It happened previously on March 9, 2010. Fedor Tyutin fought Ryan Getzlaf and Tyutin recorded 1G, 2A while Getzlaf recorded 1G, 1A.A double Gordie Howe hat trick achieved by two players on the same team occurred on April 5, 2012 in a game between the Los Angeles Kings and San Jose Sharks. Joe Thornton and Ryane Clowe of the Sharks both recorded 1G 1A and one fight each.A triple Gordie Howe hat trick occurred on November 14, 1992 in a game between Buffalo Sabres and New York Islanders. Tom Fitzgerald recorded 1G 1A, Wayne Presley recorded 1G 2A, Benoit Hogue recorded 2G 1A and all three players recorded fights.


I'm pretty sure I never saw Howe play as a Red Wing but we were regulars at Houston Aeros games as he played with his sons and led the team to two league titles. In a football crazy town he really put hockey at or near center stage.

As for his career.... it's hard to describe. I'll get arguments from Gretzky and Orr supporters among others but for my $$ Gordie Howe is the greatest hockey player ever. A few highlights:

- 7 time MVP, 6 time scoring champ, led teams to the final championship series round in 15 of his 32 seasons, including winning 6 world championship cups.

I was just about as big a fan of Gordie Howe as I was of any Ranger, and that's saying something.
Posted by Commishbob at 11:30 AM