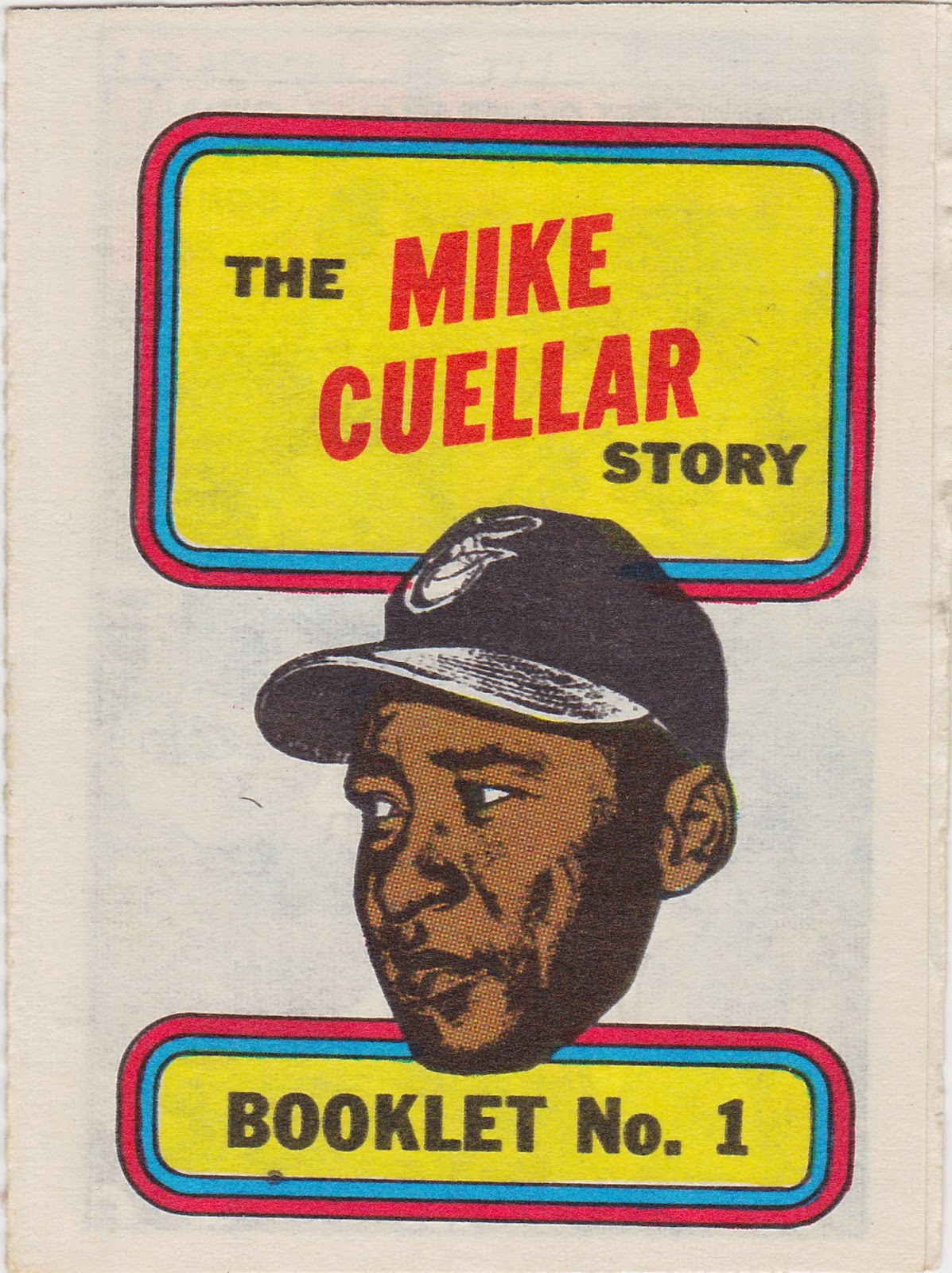 I suspect I'm using that term in the title incorrectly but I thought it was clever so there you go. Anyway, the Eddie Giacomin comics booklet posted the other day garnered a comment by Jim From Downington that mentioned a baseball version from around the same time.

Coincidentally I had just been pulling some oddball Orioles items from loose 9 pocket pages as part of my re-organization process. The 'Mike Cuellar Story' is the only one of these I own. It's part of the 1970 Topps insert set of these comics. I didn't scan the remaining page because of the way it's glued together. I didn't want to flatten it out. Below is on of the inside two page spreads. I've blown te pages up separately so they can be read easily. 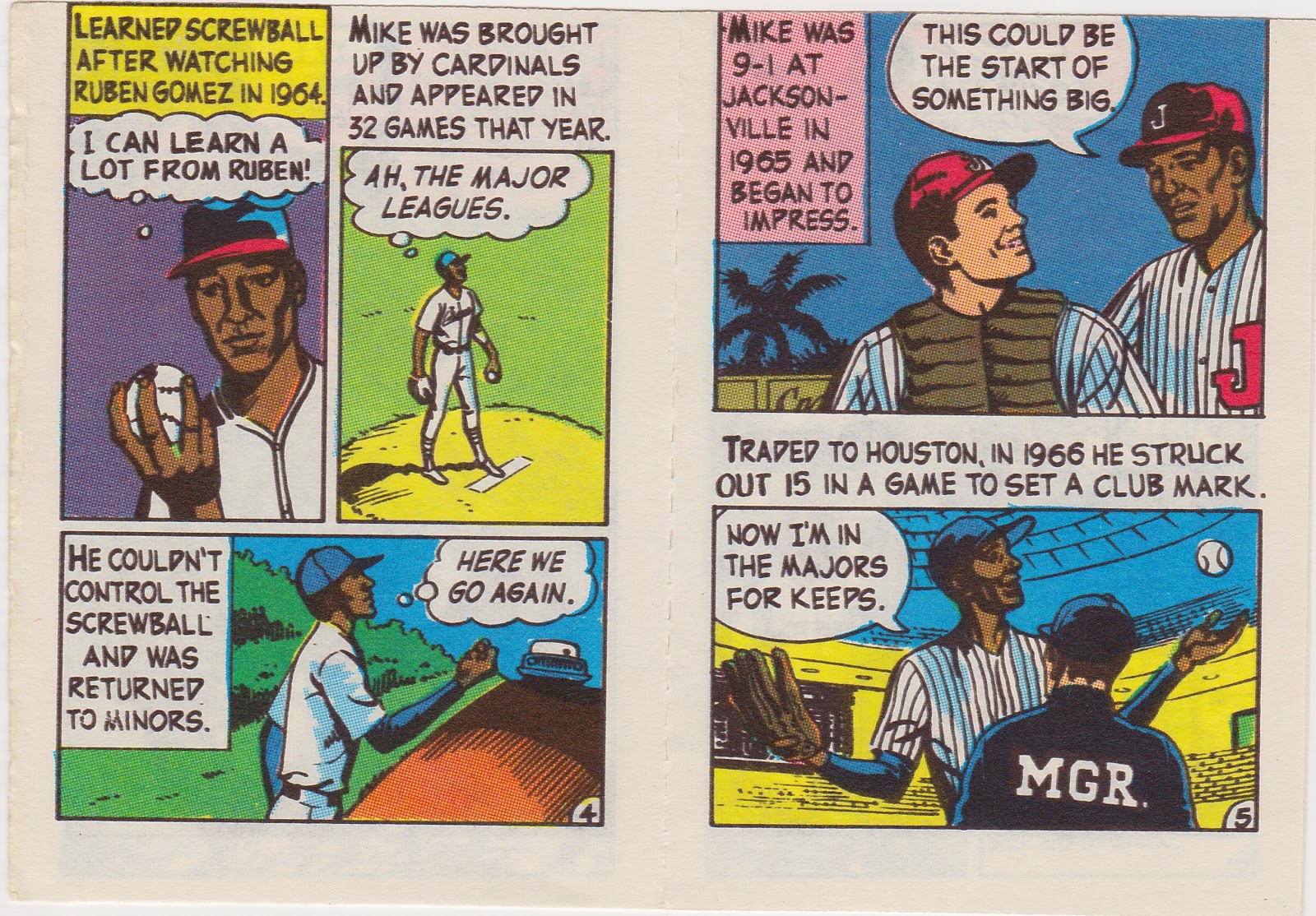 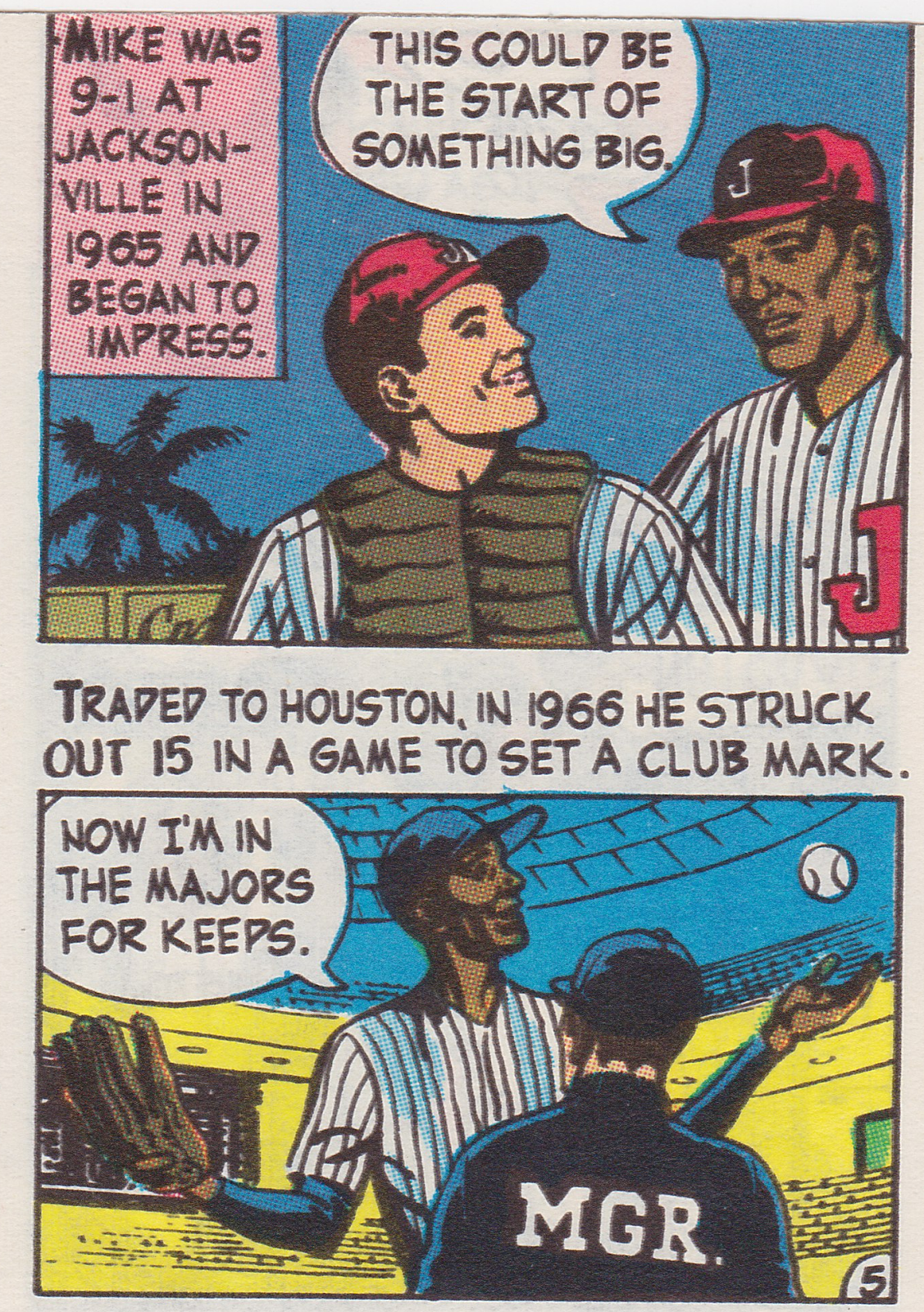 As with the hockey booklets the back page is the checklist. It's easy to decipher the way Topps did this. Booklets 1-12 are American Leaguers obviously and listed in order of their teams alphabetically. Cuellar=Baltimore, Petrocelli=Boston, Johnstone=California and so on. NL guys run the same way with the 13 to 24 numbers. 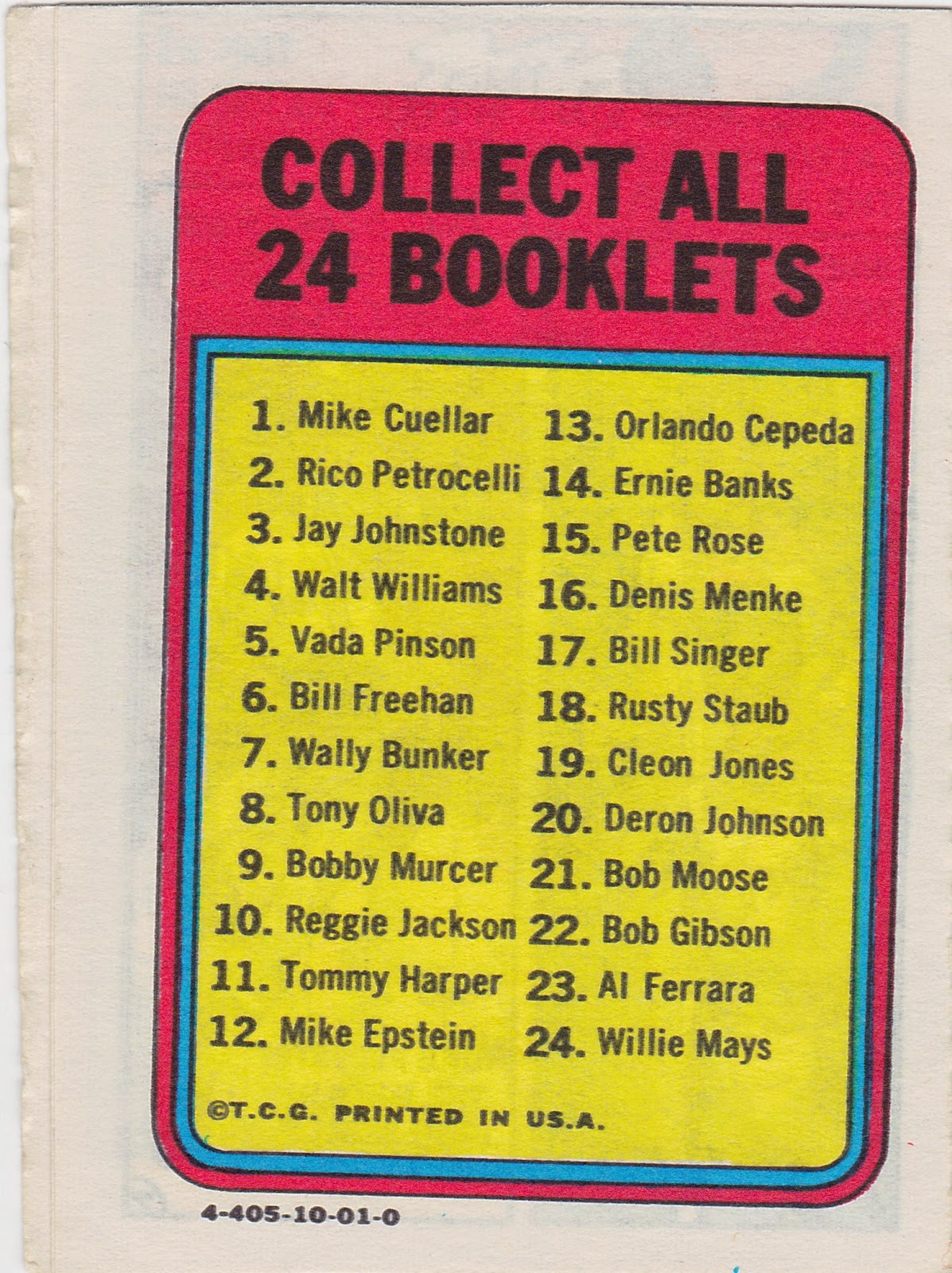 What's harder to figure is Topps choice of players. Some of the selections were the 'face of the franchise', or at least close to it....Mays, Gibson, Banks, Rose. Others are star players who you can justify as a player worthy of being featured... Oliva, Staub (now that I think of it Staub WAS the Expos in 1970), Jackson, Murcer, Freehan, Cepeda and Cuellar. The others are more puzzling.

Bob Moose? He was coming off a year in which he pitched a no-hitter (the only one I've ever witnessed, btw) but you wouldn't think of him if somebody asked you to 'name a Pittsburgh Pirate'.

My guess would be that several factors were in play here.... possibly Topps didn't want to use the 'usual suspects' and maybe more to the point was Topps trying to find what they considered an 'interesting' story to feature. If I had a few of the other booklets I might be able to check them out.

That may also be the answer as to some of the hockey player selections that were debated on the Giacomin post. I dunno.

Anyone out there have any of these? below is a pair of pics I got off eBay. The listing is for 10 of the 12 AL booklets. The bottom pic shows how colorful the set is. they'd look cool in binder pages, yes?

As I type this late Thursday the lot has no bids at a $5 asking price. I may have to go back and do something about that. 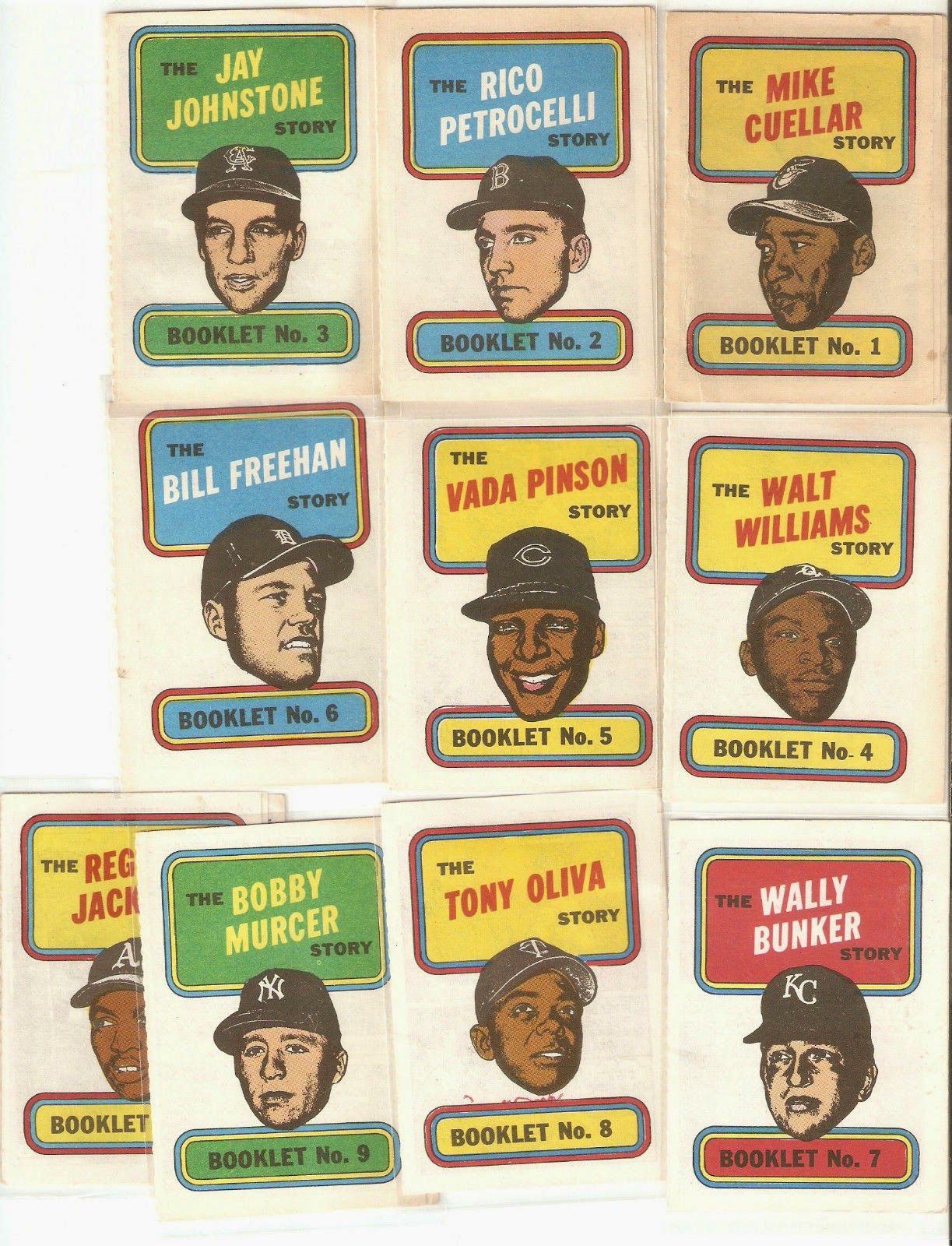 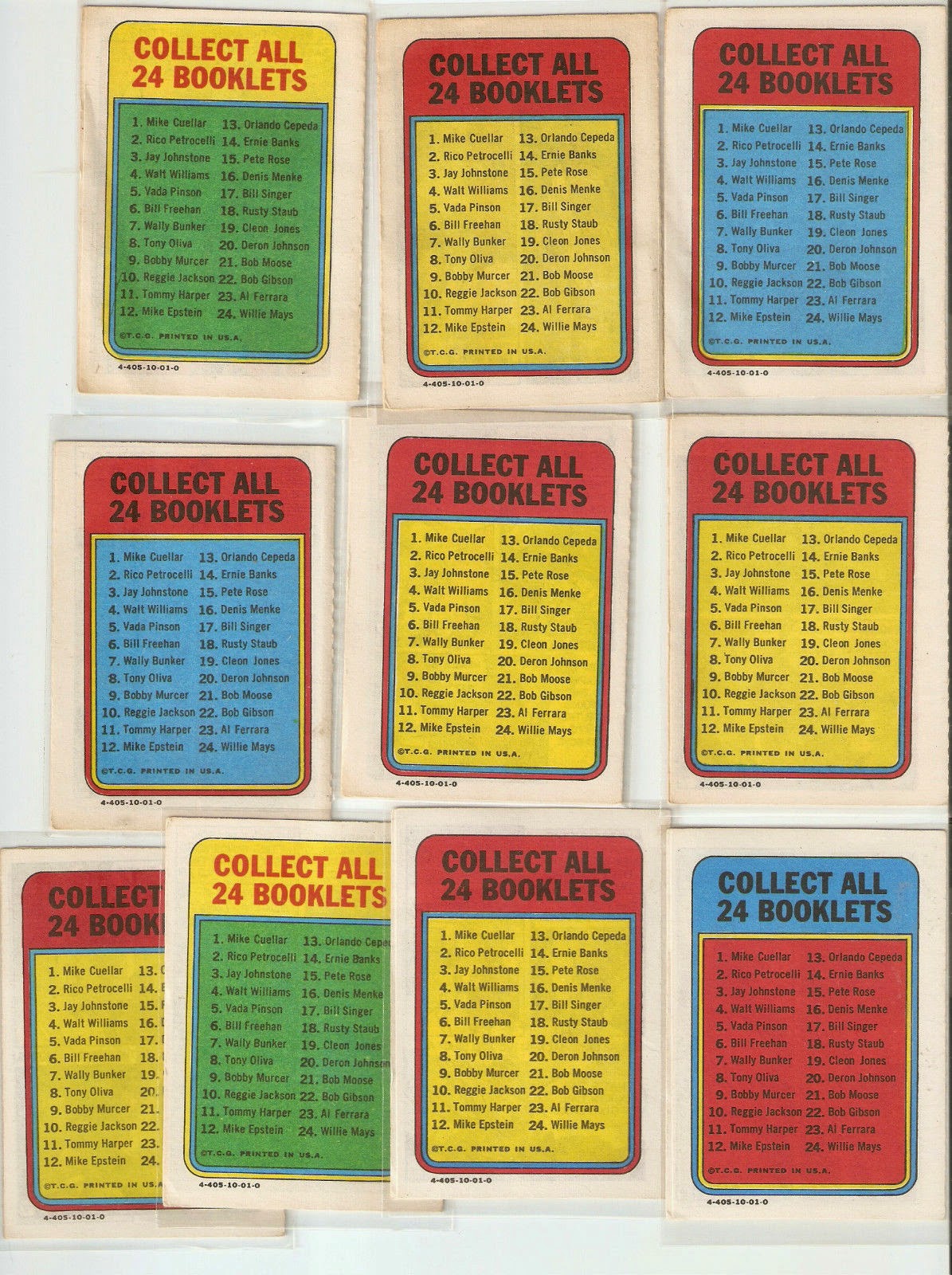