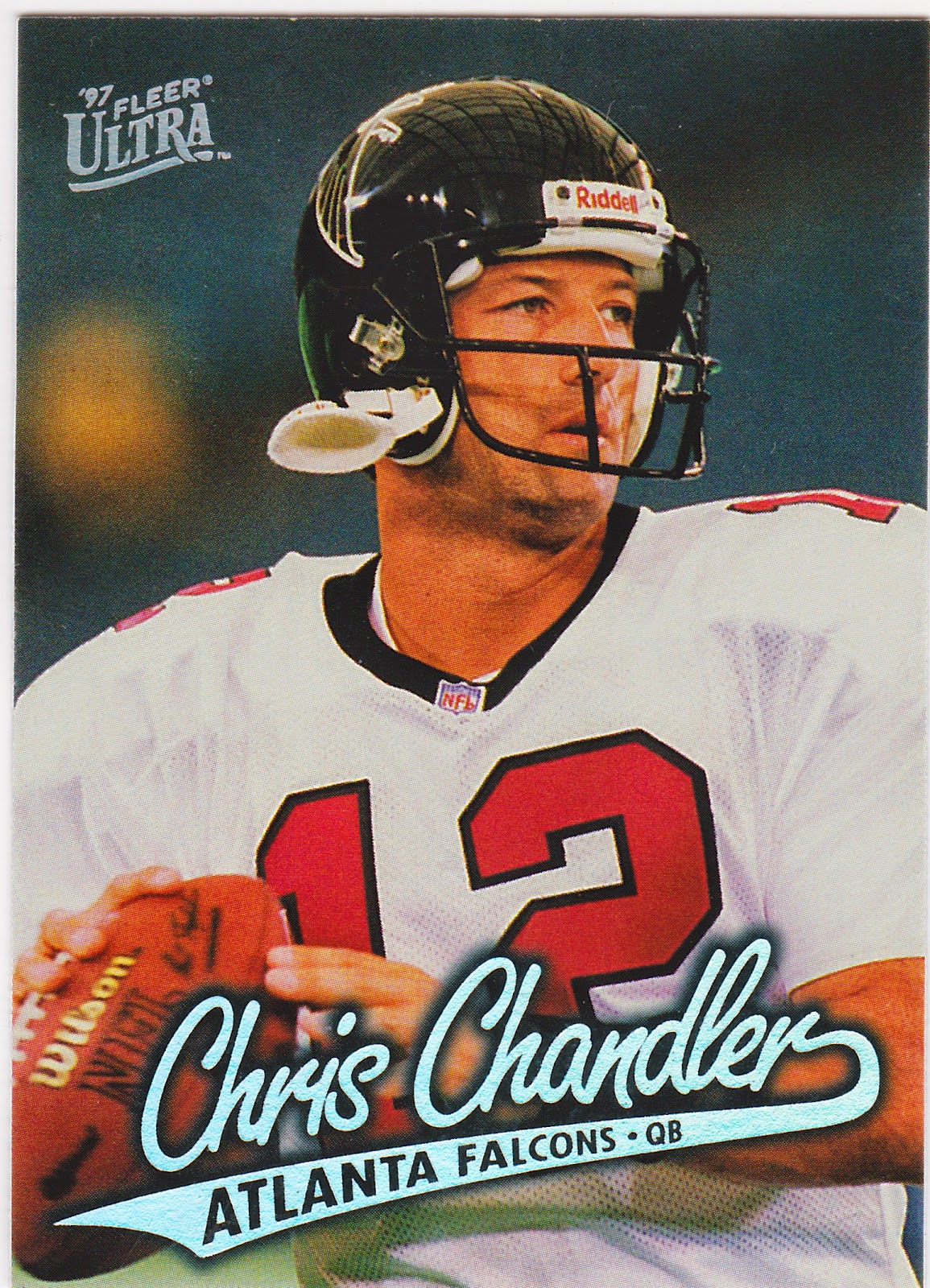 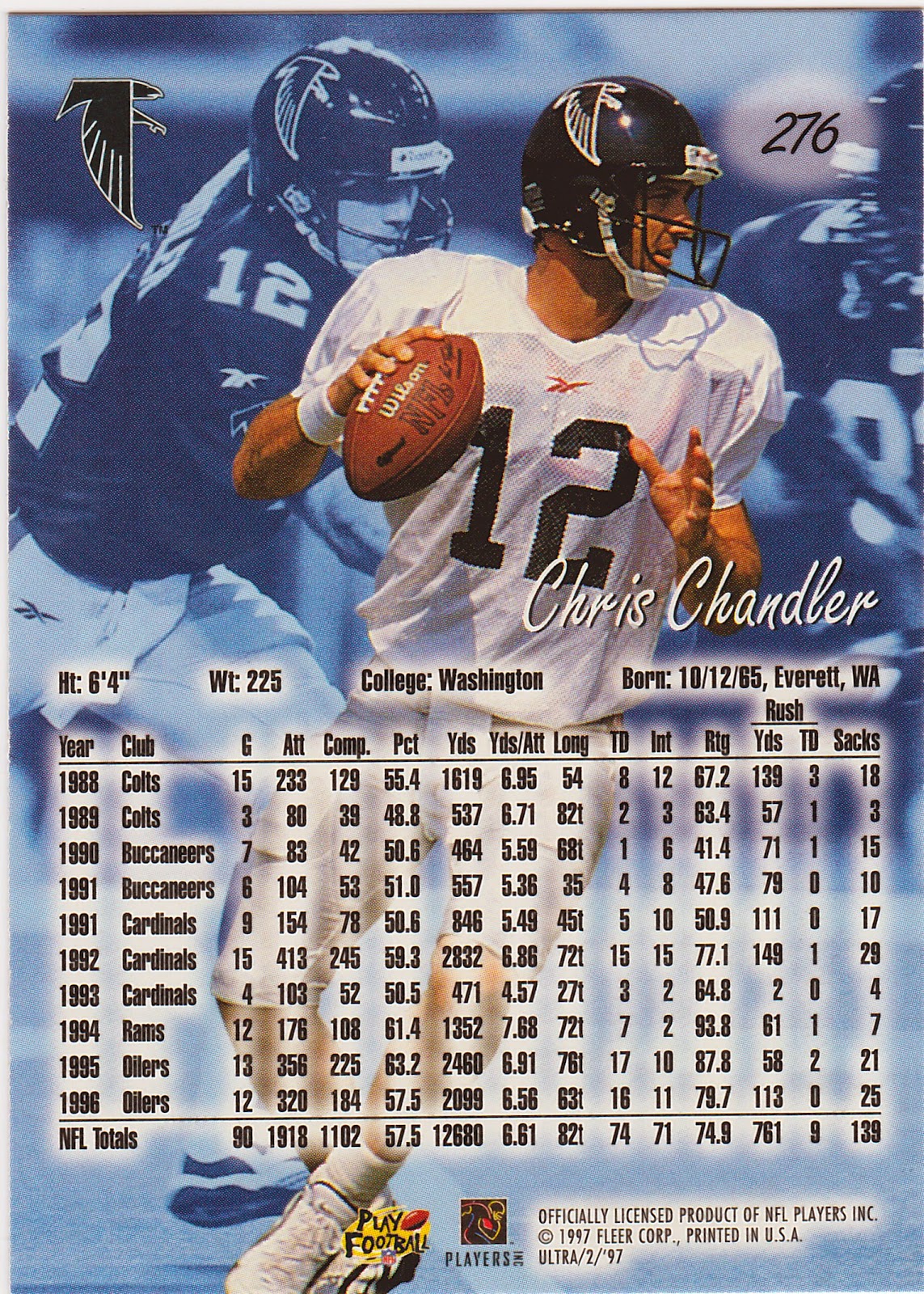 
NFL Info: Drafted out of Washington by the Colts in 1988 as a third rounder Chris Chandler spent the next seven seasons banging around through four different organisations. With the Colts, Bucs, Rams and Cardinals Chandler was never able to nail down a starting job for long. Finally, when he came to Houston in 1995, he was able to take the reigns of a team for an extended period. He started for the Oilers for two seasons while Steve McNair learned the ropes. In 1996 Chandler found a home in Atlanta and he was one of the more successful QBs in Falcon history.

In 1998 he led the Falcons to a 13-1 record and the Super Bowl where they lost to the Broncos. By 2002 Chandler had again lost his job, this time to Micheal Vick and he moved on to stints in Chicago and finally with the St. Louis Rams. For his career Chandler had two Pro Bowl appearances ('97 & '98) and just that one postseason experience. When he retired after the 2004 season he turned to golf and currently coaches high school golf in San Diego at Torrey Pines high school. He is the only quarterback in NFL history to start for eight different teams.

Fantasy Impact: In 1997 coming off a championship season I was relying on Jeff Blake and an ineffective Troy Aikman at QB. I picked up Chandler mid-year and threw him into the starting line-up with three weeks left in the season. He helped me win the final three games of the year and then got me two post-season wins and a second consecutive championship. At that time I was the first in my league to pull that off. And for that I'll always have a soft spot for Chris Chandler.

Surprisingly that was my only time to have him on my roster. That's surprising in that he was probably kicked around in fantasy free agency many times in his long career and I'm never one to ignore an ambulatory experienced QB.

The Card: The '97 Fleer Ultra is one of my favorite sets of the era. I liked the full bleed front shots and fact that I could actually read the players' name despite it being rendered in shiny 'cursive' text. The back had two different photos and full stats. What's not to like?

These '97 Ultras remind me of when I discovered that my end of Houston had birthed a second card shop. The family that owned it had been setting up at card shows for years and I had always made a point to stop at their tables as they were very friendly and had lots of singles of new football cards, something not easy for find in those pre-eBay days.

I had no idea they were actually from my area until I walked into their shop for the first time. I would go back every few weeks during the football season to try and find cards of players I had picked up since my last visit. And I was still filling in holes from many prior seasons as well. The owner's wife, a very sweet lady, would always take my list and promise me that she would have her sons look for my wants.

Many of the cards I picked up at that shop were from this set and other Fleer Ultra sets from the '90s and 00's. I've since changed out a lot of them in the interest of variety but seeing the ones I still have in the binder always take me back to the counter in that shop and sifting through stacks of football cards. Good times.
Posted by Commishbob at 5:30 AM