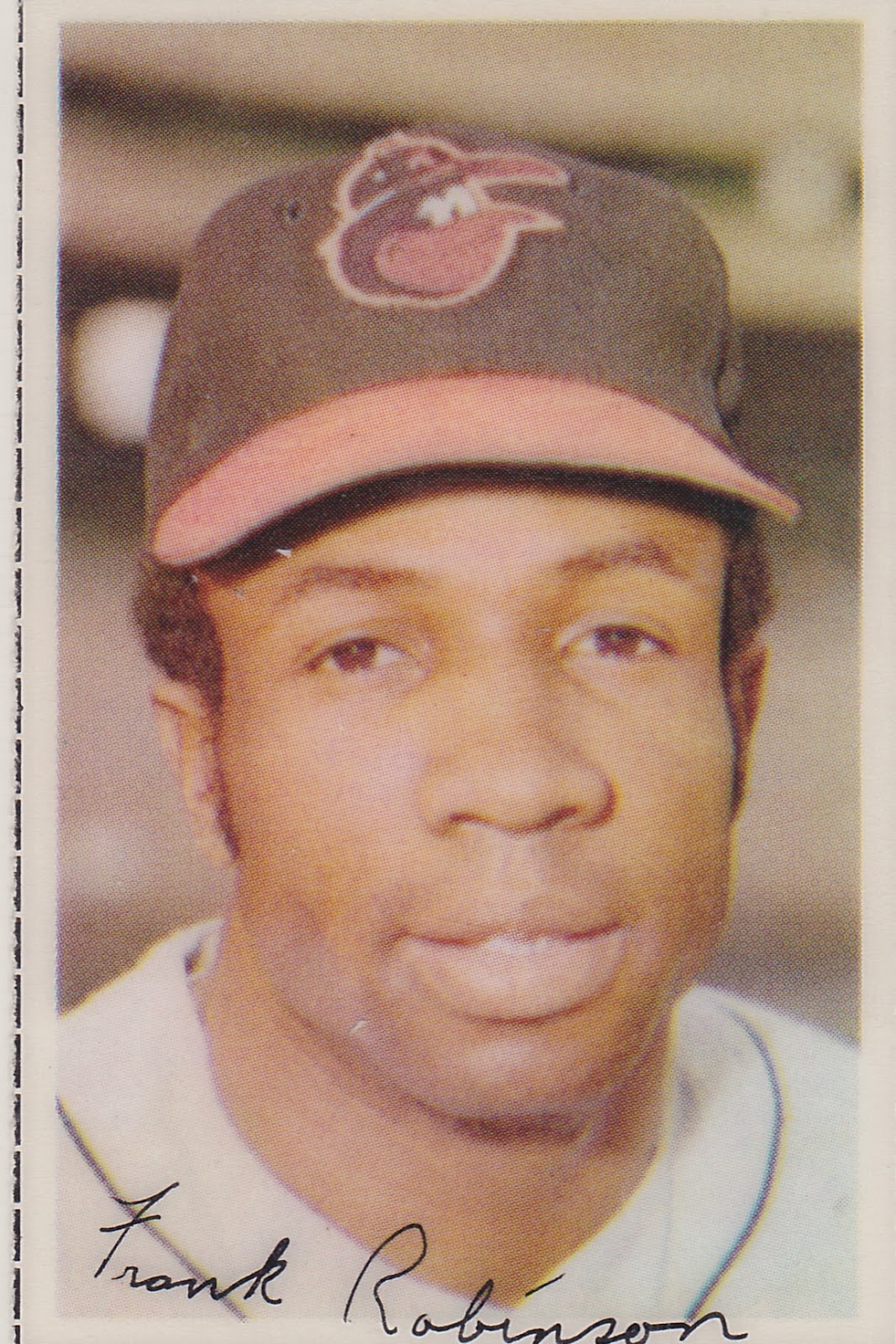 These first two 'cards' are from what was the Dell Stamp albums issued in 1971. I don't know much about them other than the fact that each team had an 'album and these 'stamps' or cards were what made up the pages of the albums, 12 to a page. There was also an All Star Album and from what I understand these two Orioles were part of the AL All Star album. The team name under the player name of the reverse is the distinguishing factor in determining that these were All Star album stamps.

It's hard to tell in the individual scans but these two are laminated. That seems to be very common but why they were laminated or who did that is unknown to me. The lamination is easy to see in the picture down the page that I took with my camera. You can see in that shot that the lamination surrounding the Robinson has rounded shoulders while Powell is inside square plastic. Again, I'm clueless as to why. 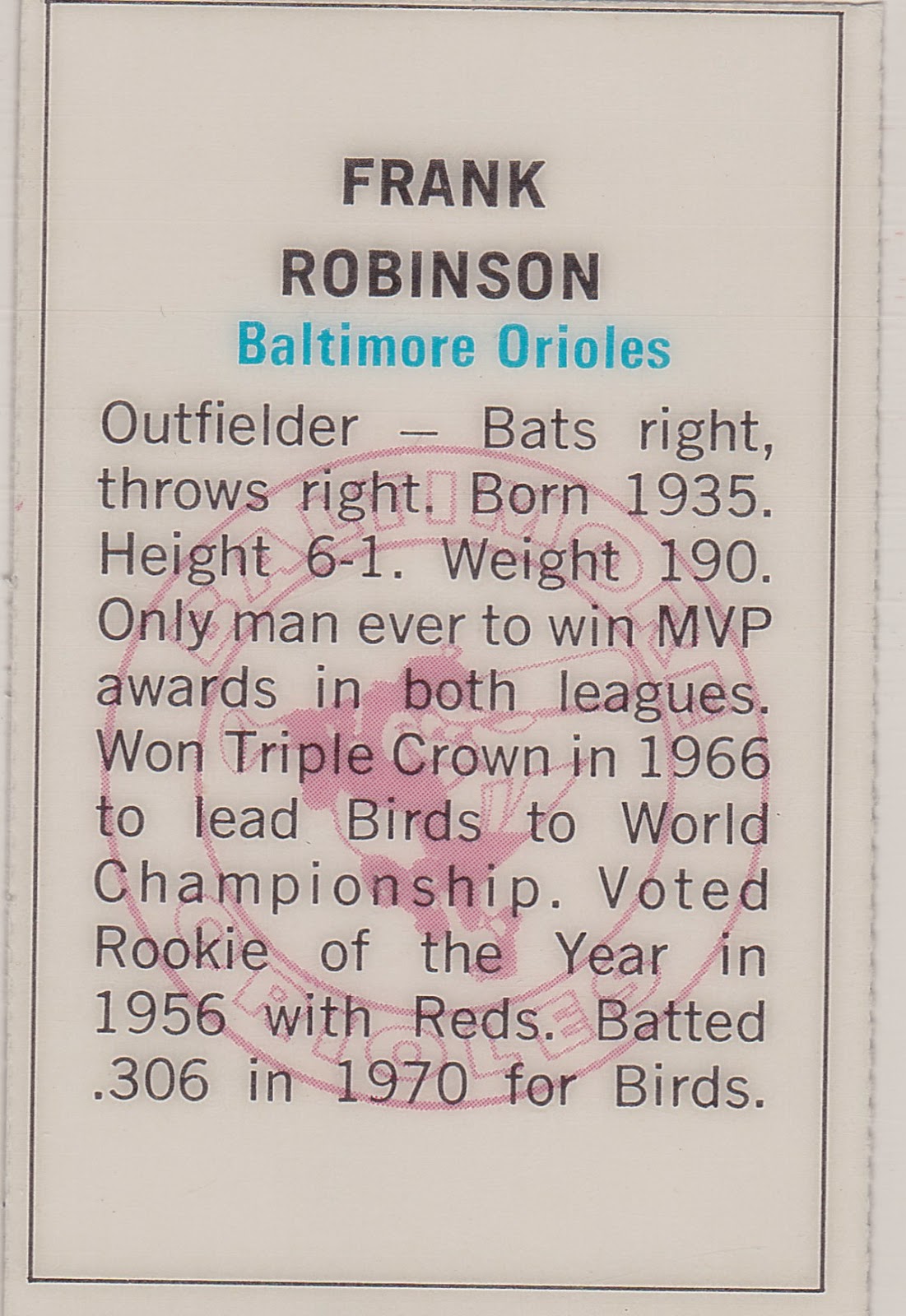 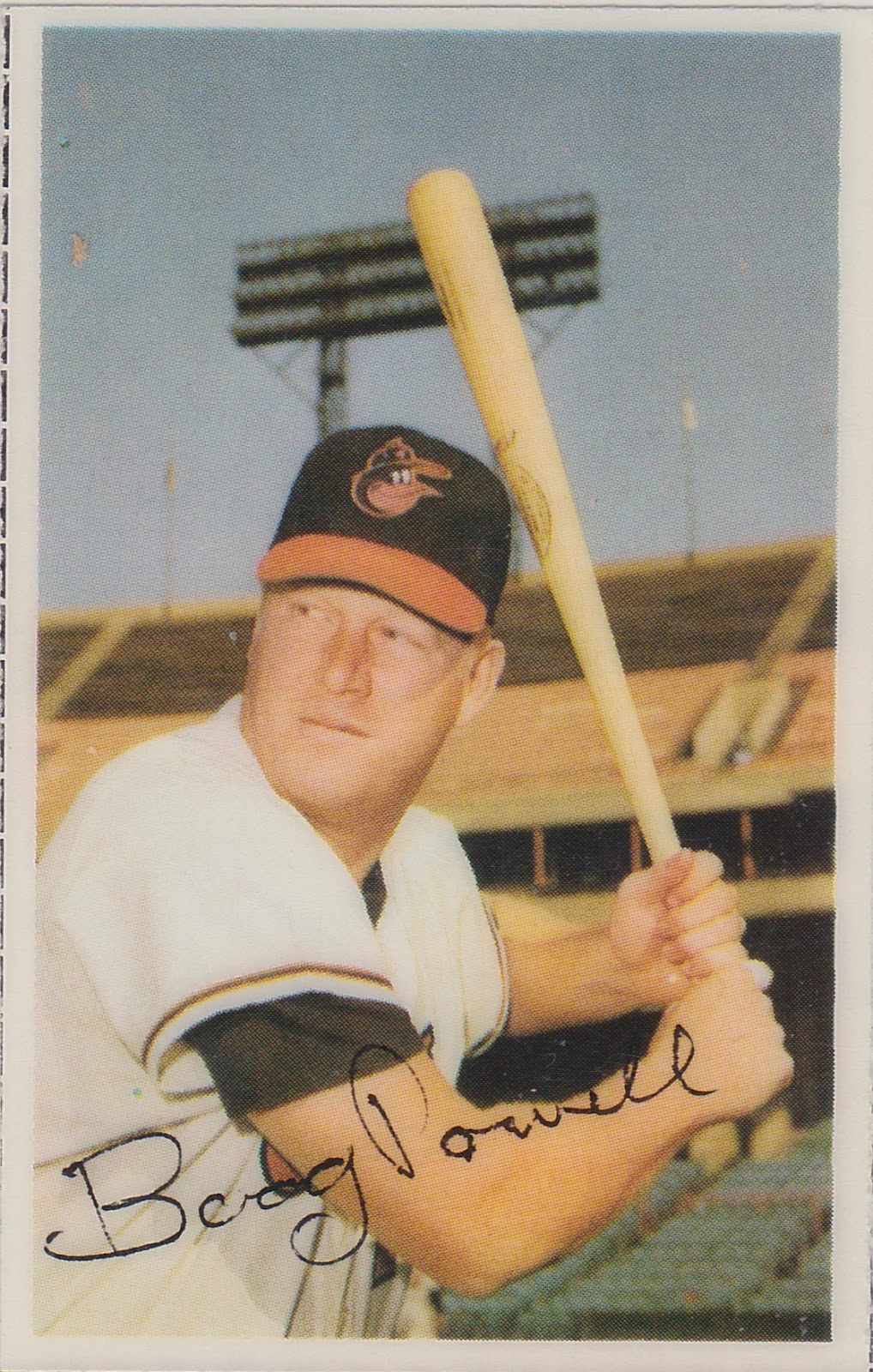 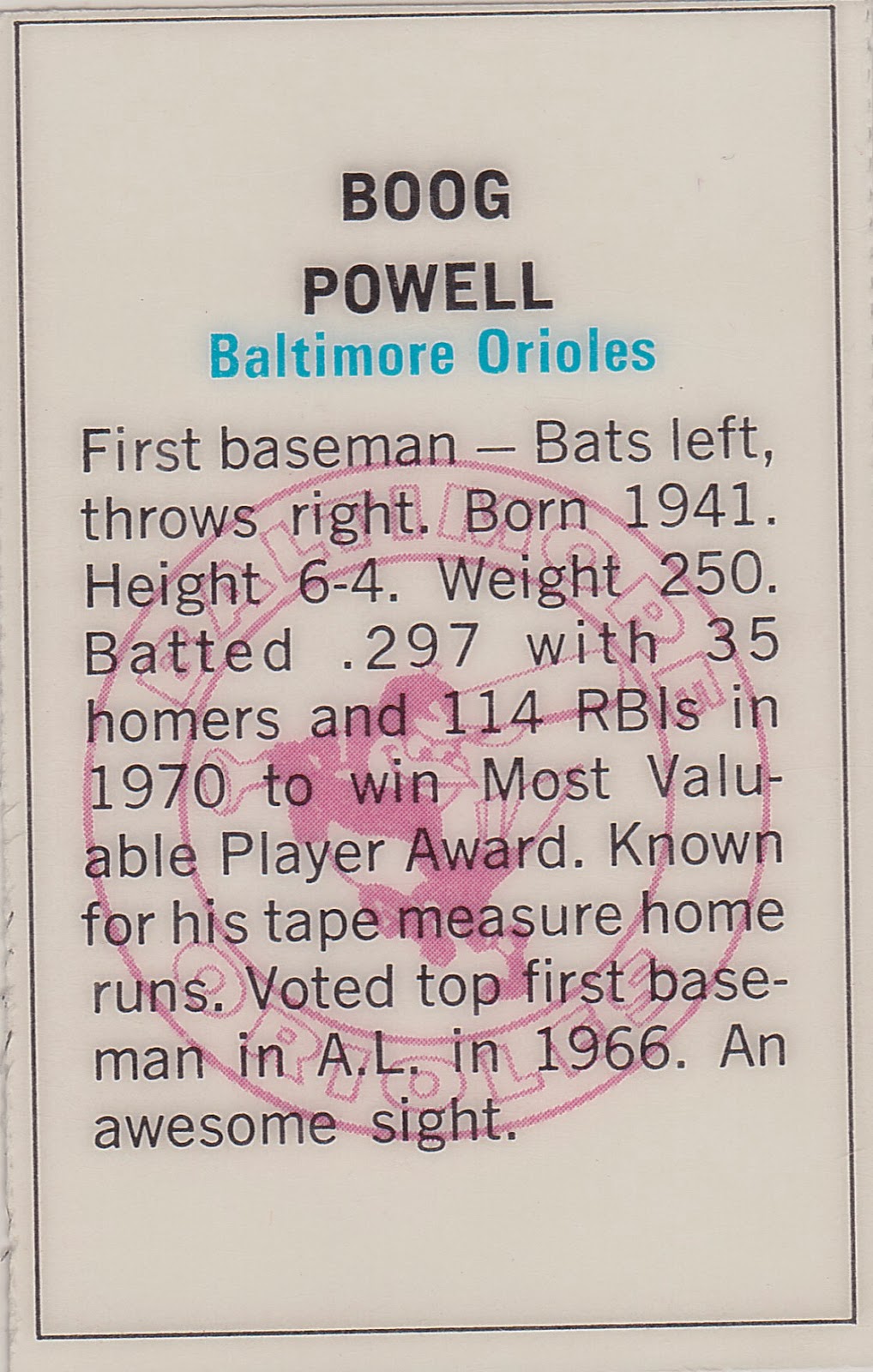 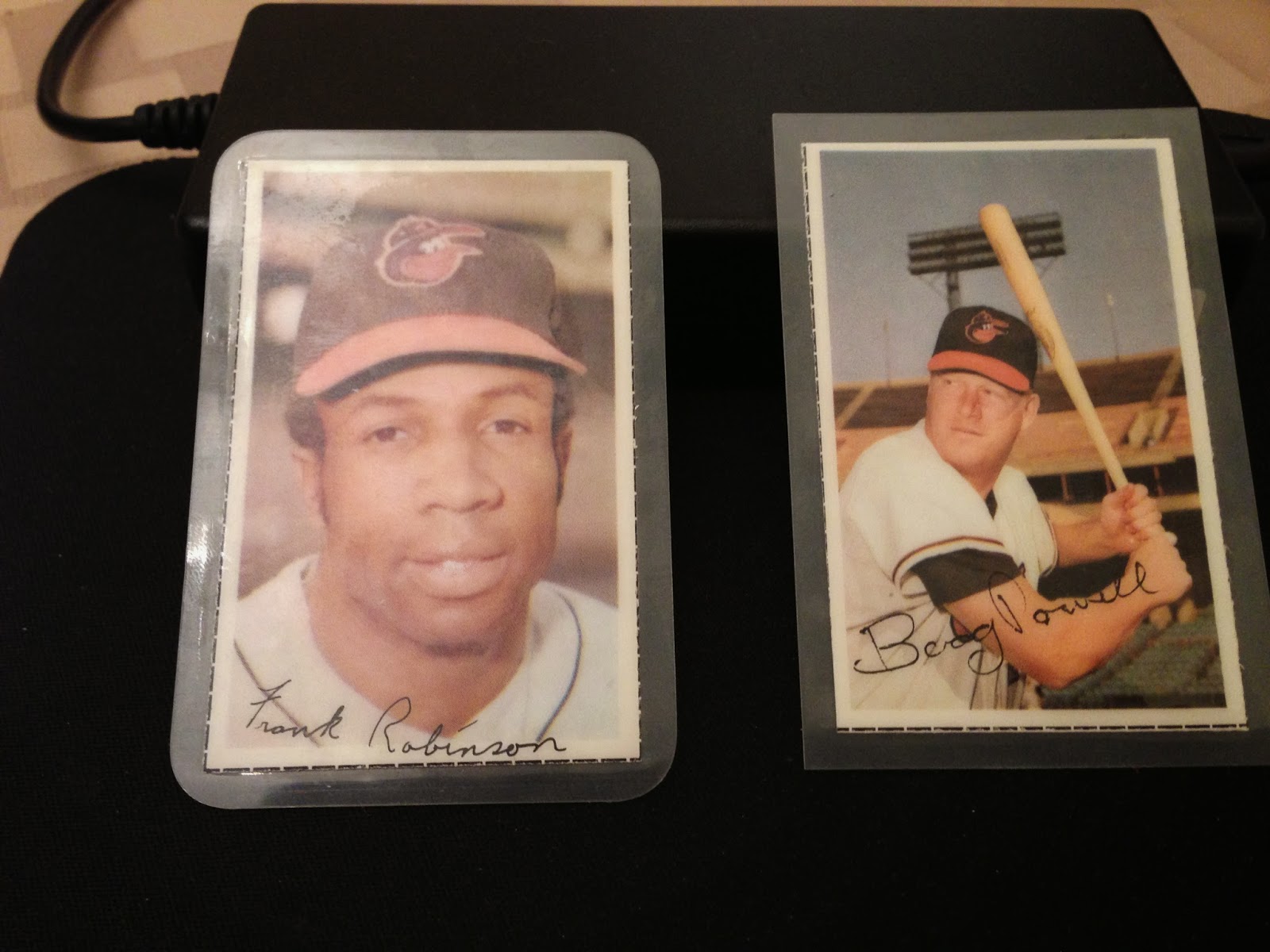 I found some photos of a page from the Orioles album as well as the cover. Including the All Stars the checklist for this set runs 600 pieces! 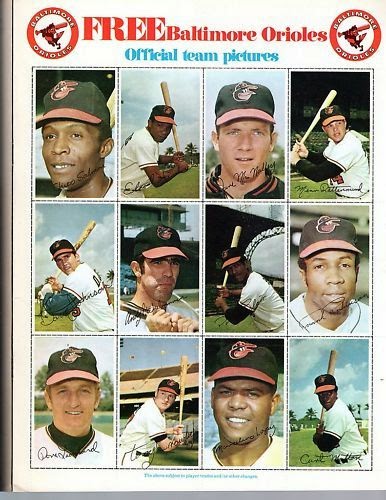 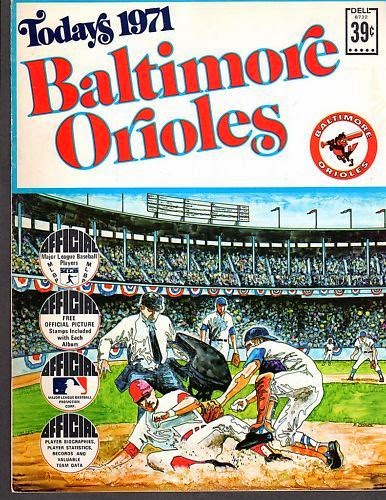 Next up we have some Milton Bradley game cards. From the 1969 game I have Moe Drabowsky and Steve Barber. Of course by 1969 Barber had left the Orioles and was pitching for the Seattle Pilots but hey, Once an Oriole....  The truth is I probably just saw it was Barber and bought it without thinking of the time line. 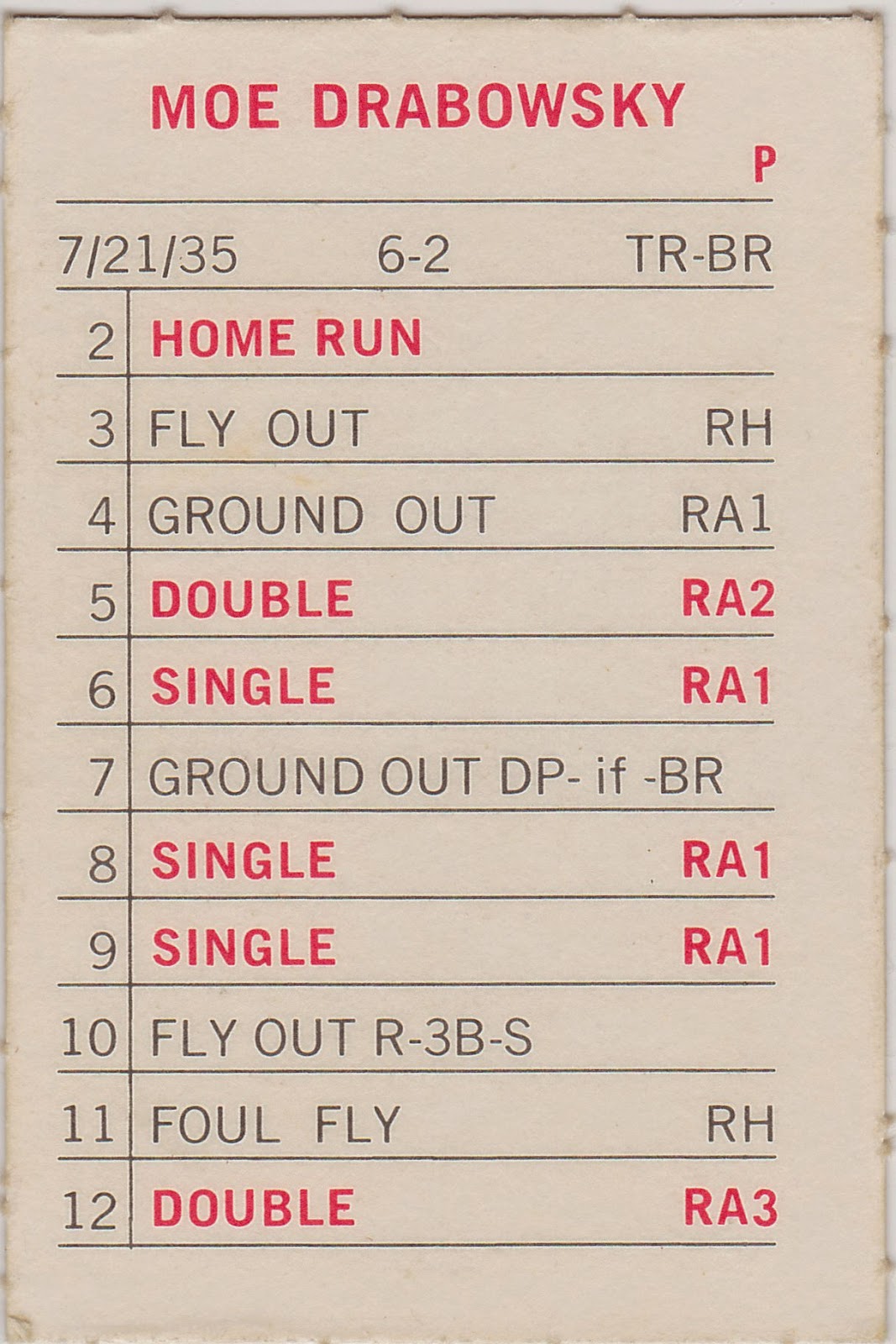 I never owned the Milton Bradley game but a look at the card backs tells me that a pair of dice were rolled to get game results. 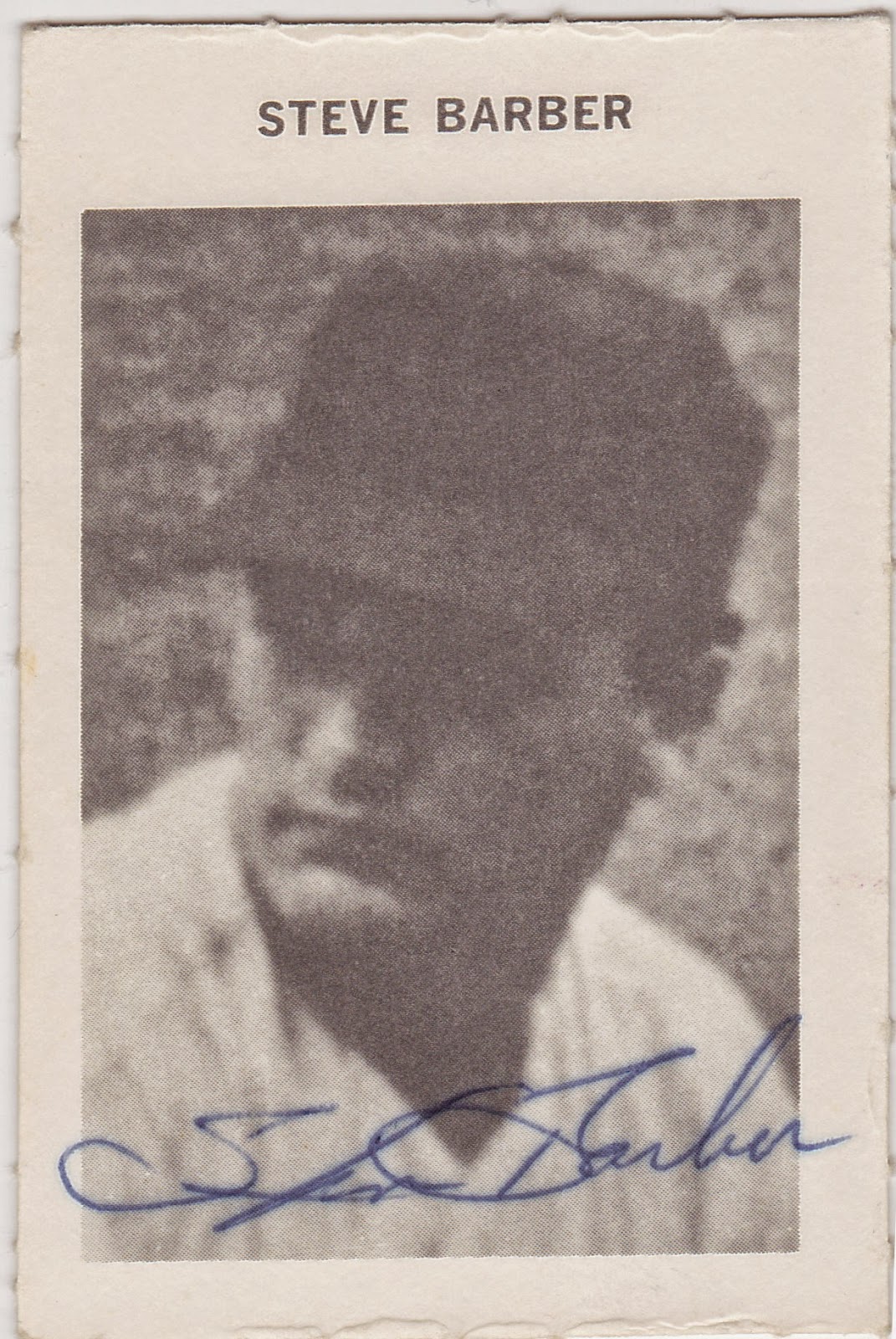 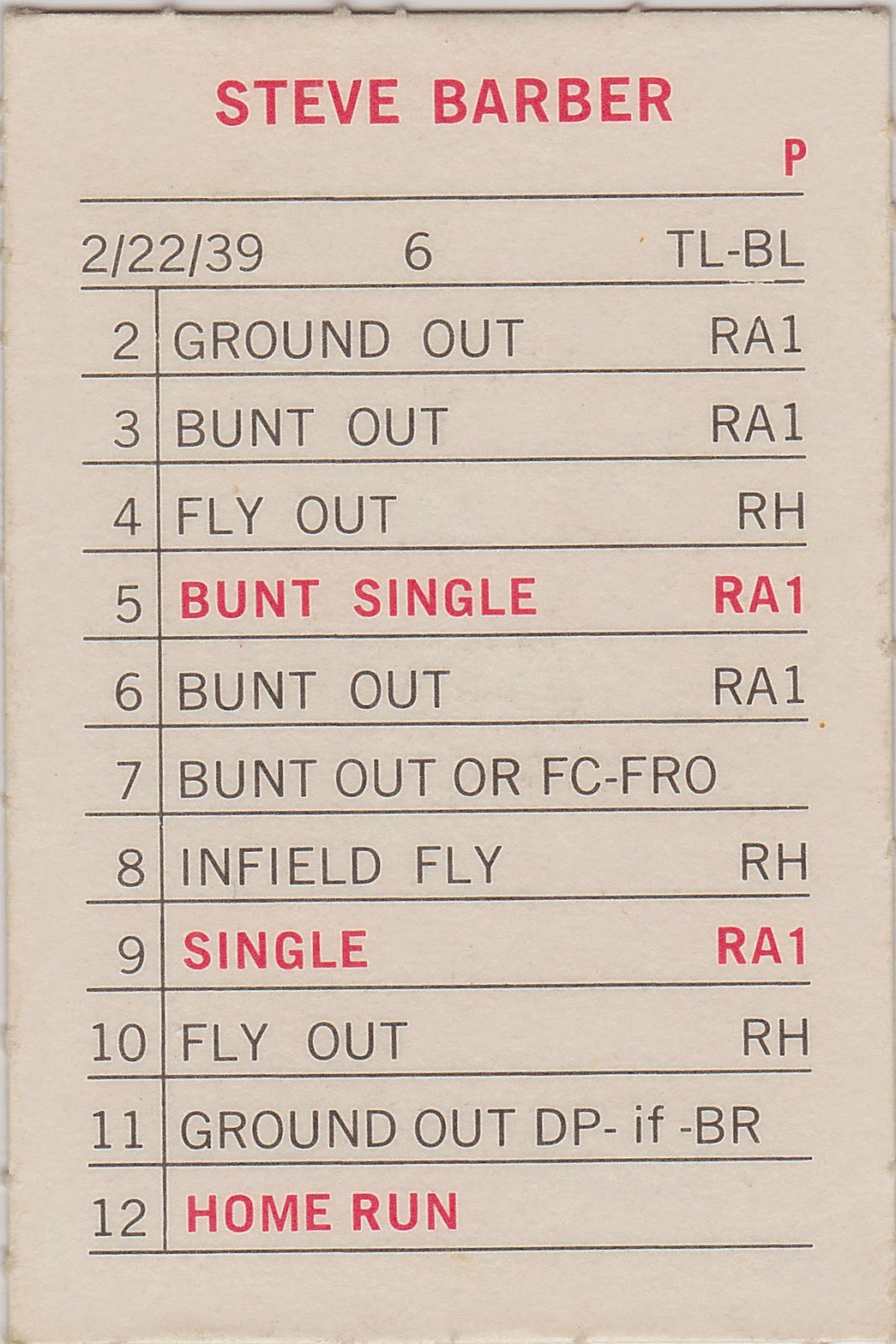 Here is a pic of the game box (supposedly the 1970 version) from eBay where the asking price is about $60. 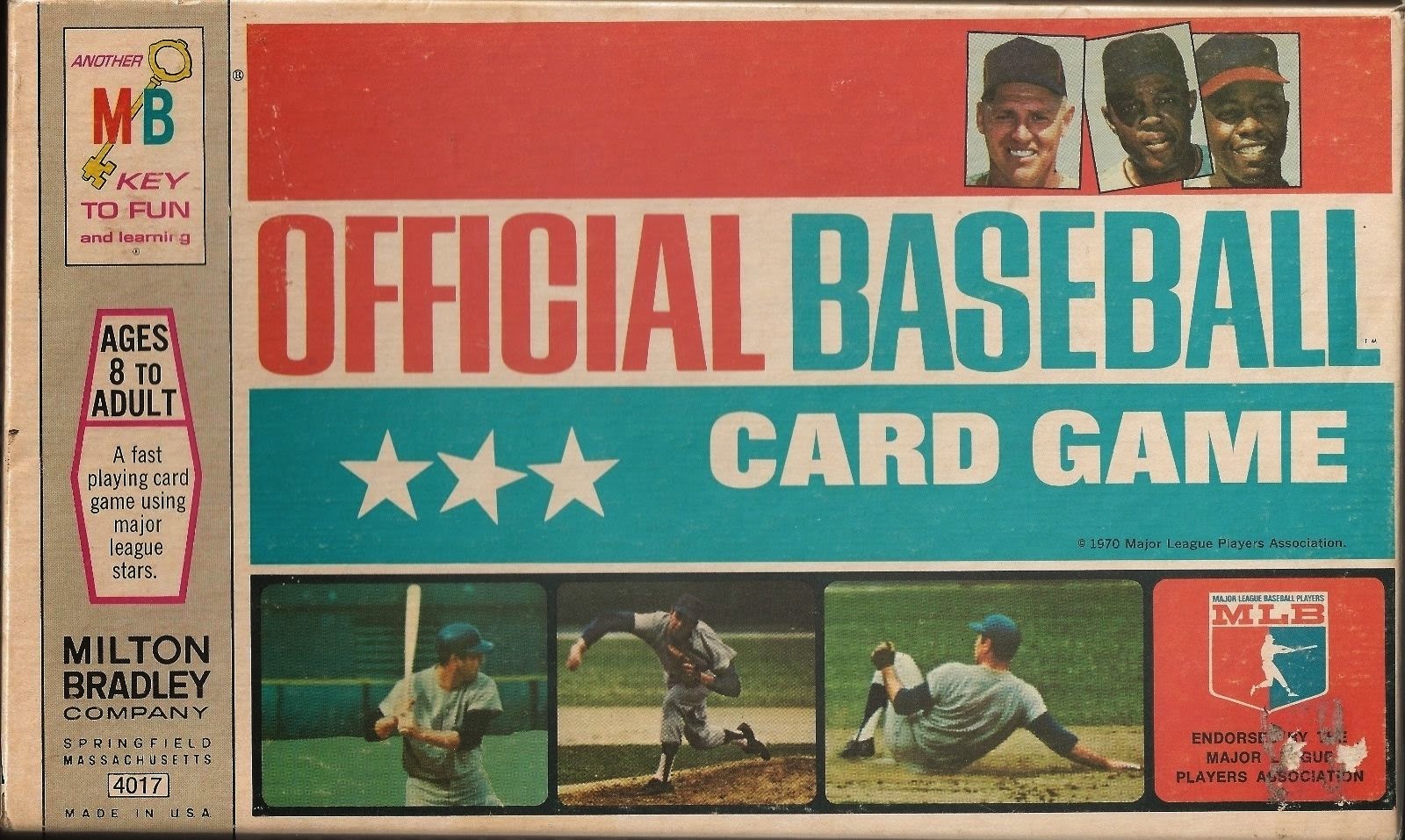 I also have a 1970 Boog Powell MB card. It's similar to the 1969s but not quite the same. The size is closer to a standard playing card. Here is the '69 next to a regular Topps card. The 1970 Powell is as tall as the Topps card but about a quarter inch narrower. 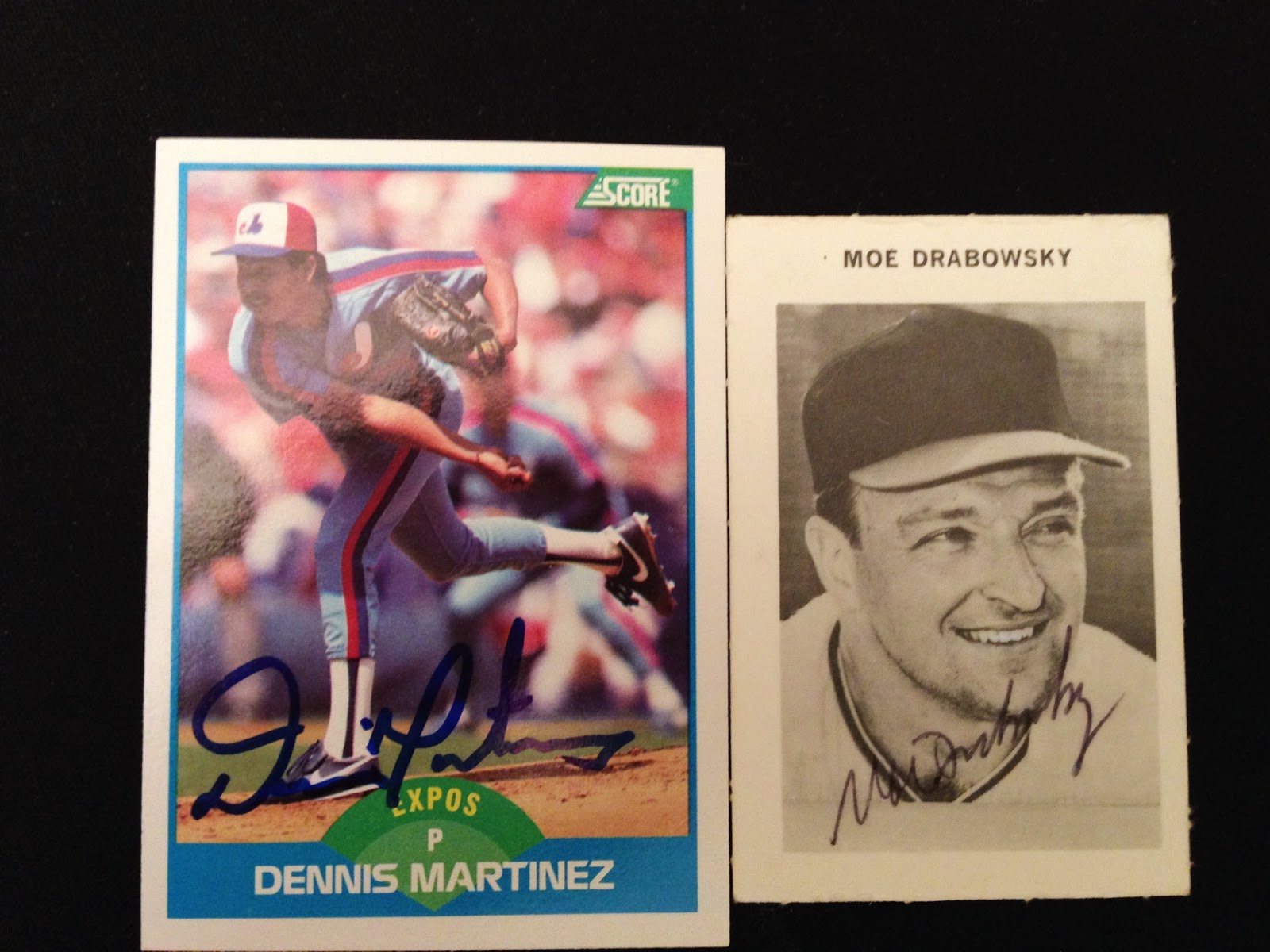 EDIT: I meant to include the scan of the 1970 Powell but for some reason it didn't stick. Here it is: 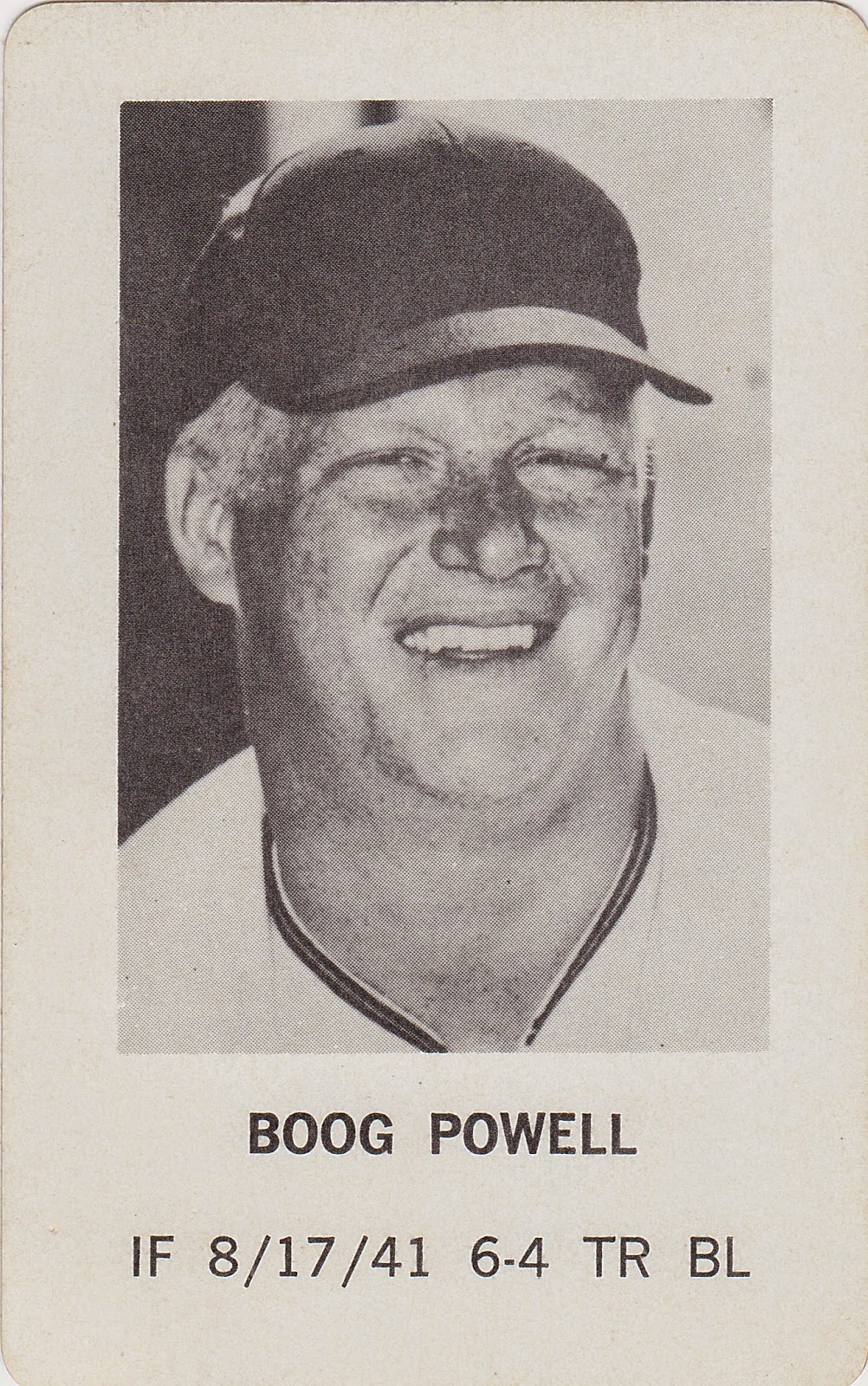 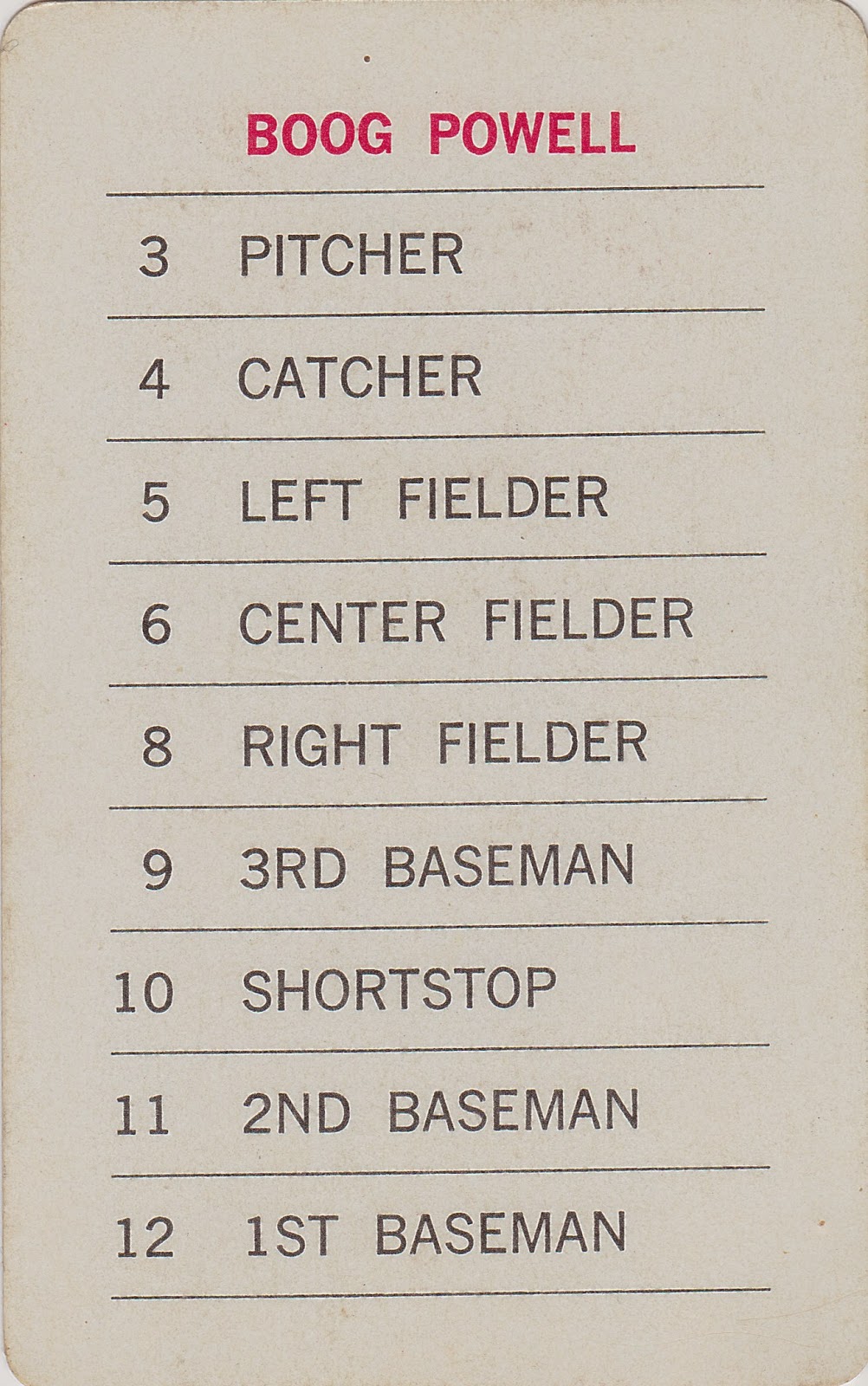 I searched and found some pics on the net of the game. The game looks very familiar now that I see these but I don't think I owned it. By 1970 I had been a devoted Strat-O-Matic fanatic for quite a few years. 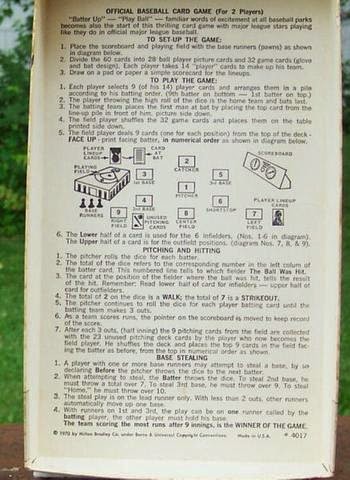 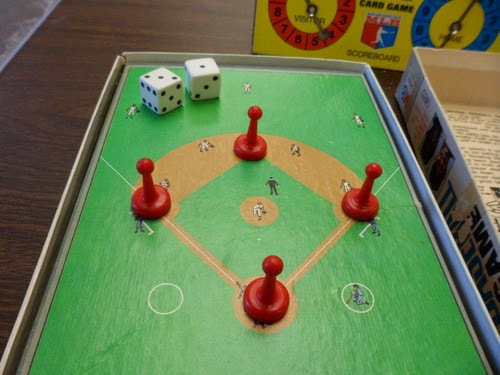 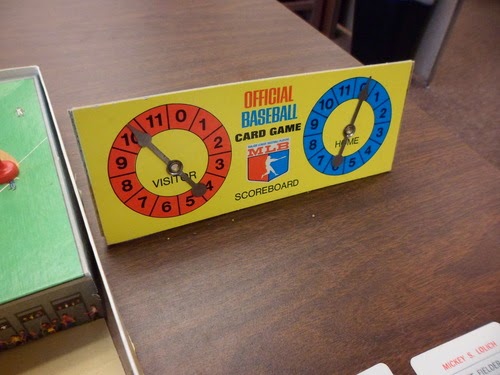