Random Baltimore Colts I picked up for a quarter each at the LCS. 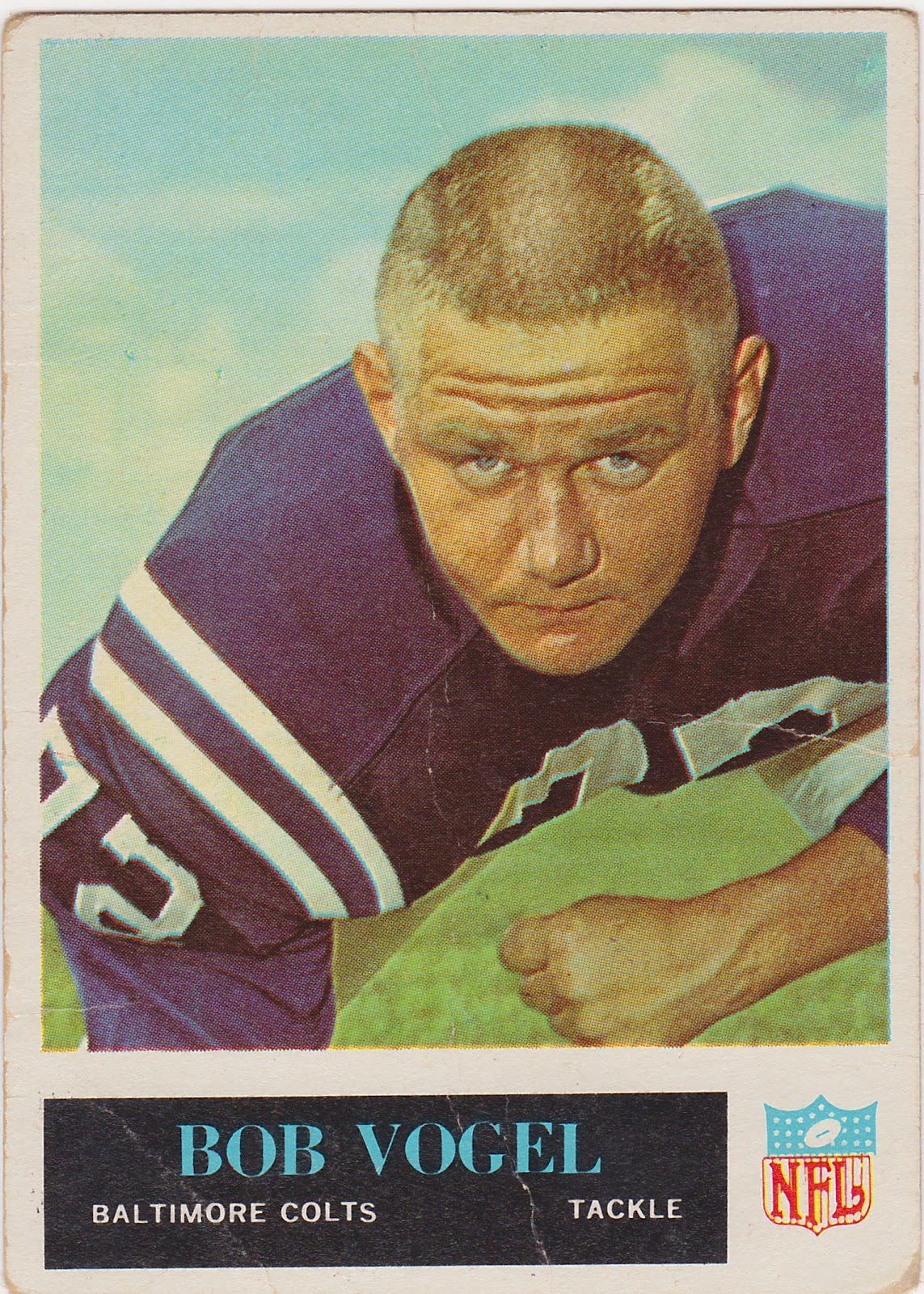 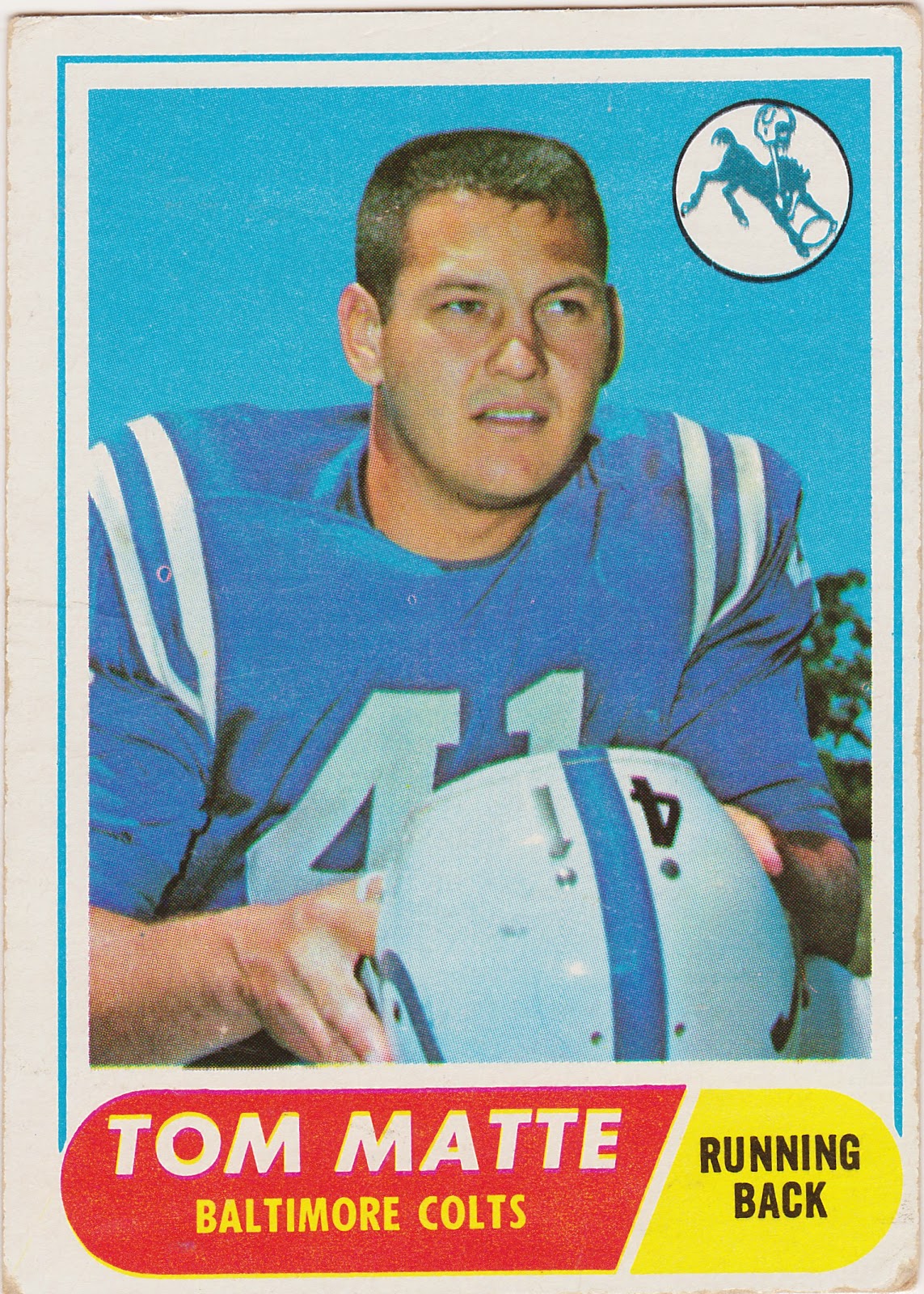 Every Baltimore Colt fan has a special place in his heart for Tom Matte. Here Wikipedia fills in the story:

Late in the 1965 season, Matte memorably filled in as an emergency quarterback when Colts QBs Johnny Unitas and Gary Cuozzo went down with season-ending injuries in consecutive home losses to the Chicago Bears and Green Bay Packers, respectively. For the Colts' regular-season finale (a 20-17 win) against the Los Angeles Rams and the following weekend's one-game playoff at Green Bay (a 13-10 overtime loss), Colts head coach Don Shula put a list of plays on a wristband that Matte wore. The wristband is now on display at the Pro Football Hall of Fame. 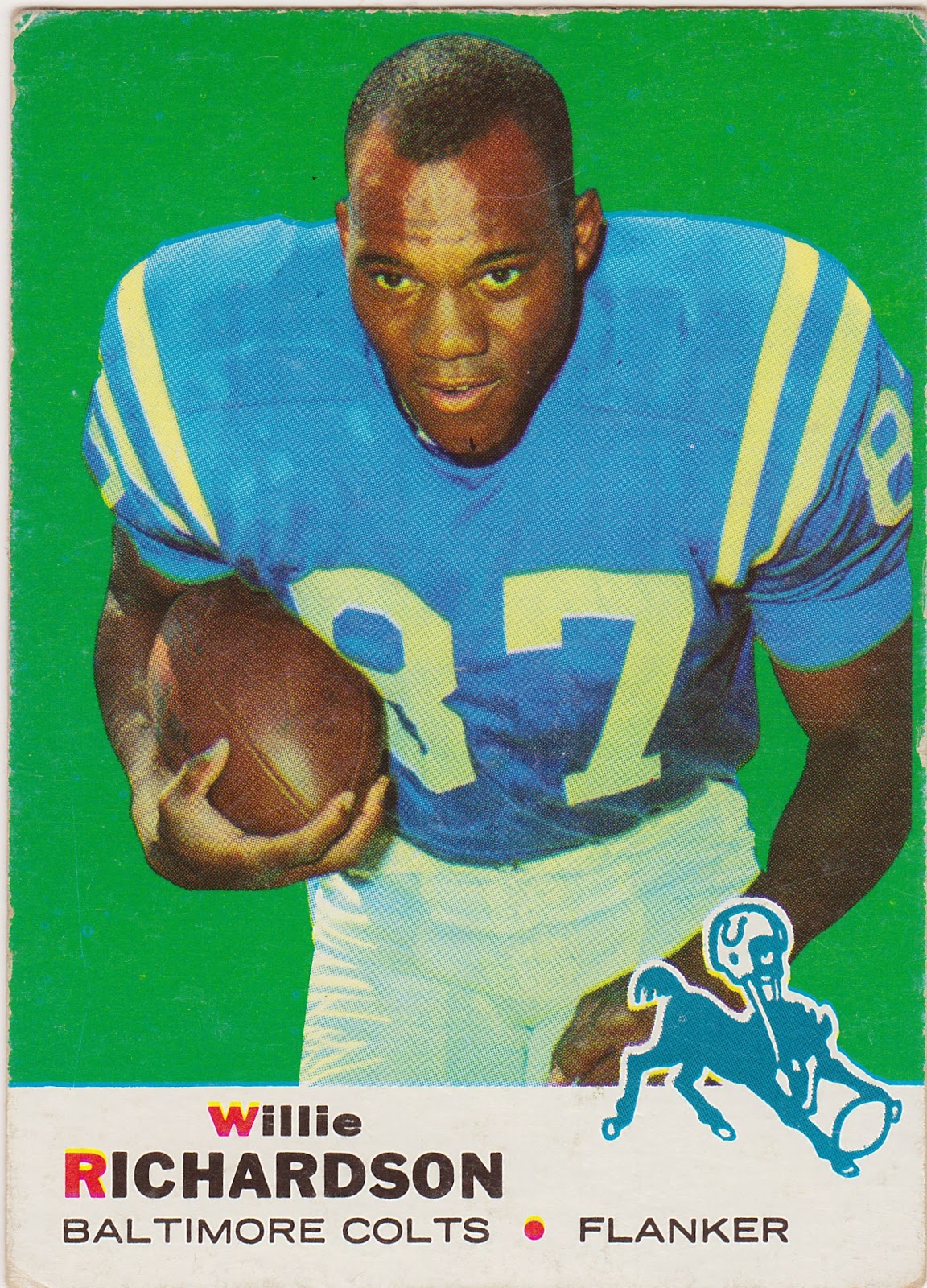 Willie Richardson, he made All Pro one year with the Baltimore Colts. 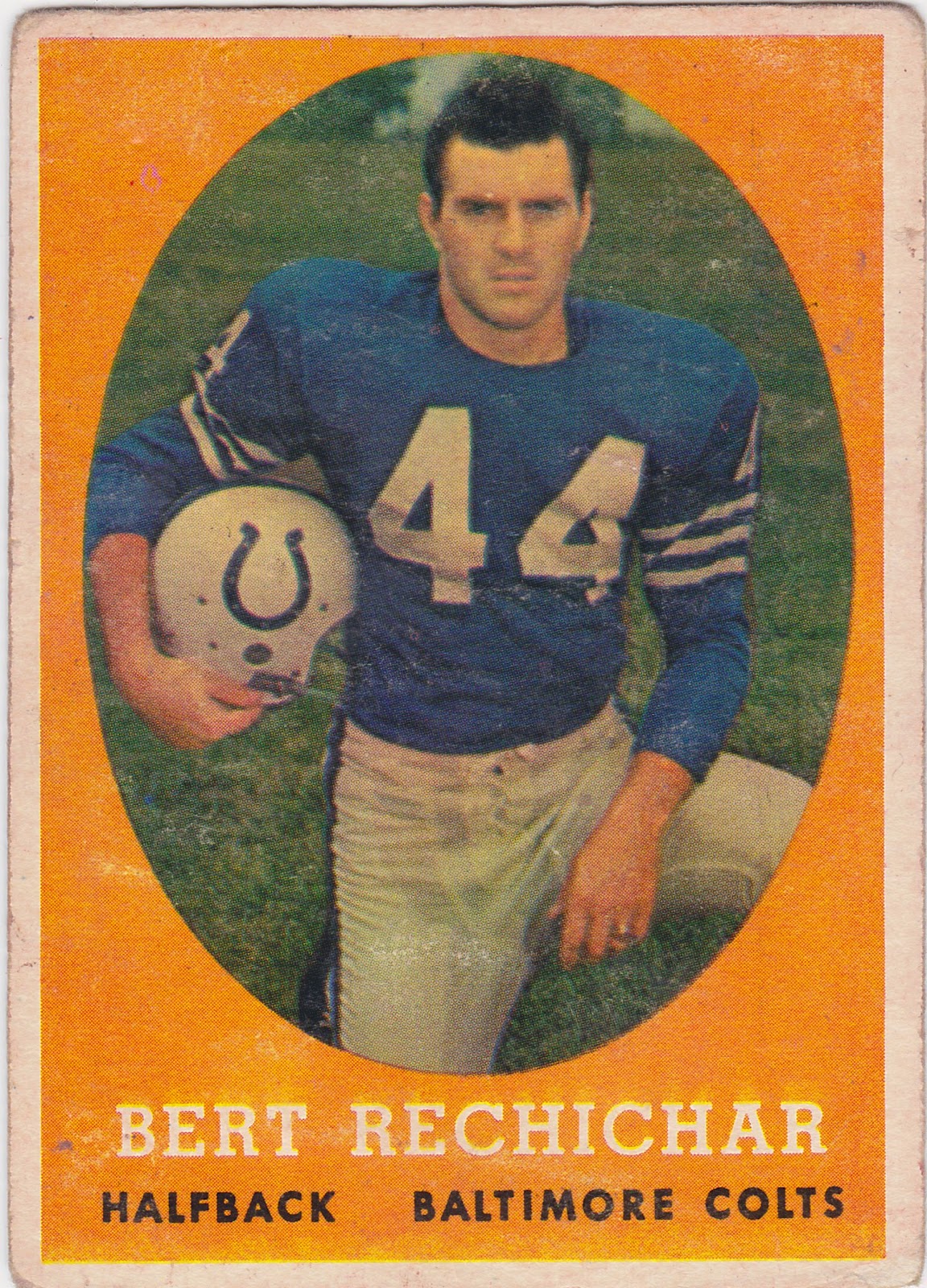 Bert Rechichar. From the 'net:

Alex Hawkins, himself one of the most colorful players in NFL history, tells this story about his Baltimore Colts teammate Bert Rechichar.
When Hawkins reported to the Colts in 1959, Rechichar introduced himself. "I'm 44. What's your name?" Bert had a cigar stuck in his mouth and kept his blind eye closed. "He was meaner than hell at high noon," said Hawkins of the former Tennessee Vol.
In 1953, his rookie year and the Colts' debut in the NFL (after the hapless Dallas Texans were transferred), Rechichar practiced kicking long FGs even though he wasn't the club's regular FG kicker. In the season opener against the Bears, the Colts found themselves at the Chicago 49 with four seconds left in the first half. Bert had started toward the locker room when an assistant coach wondered if Bert could kick a FG from there. So Rechichar went on the field without bothering to attach his chin strap and lined a 56-yarder through the uprights. Until Tom Dempsey's 63-yarder in 1970, it was the NFL record. That same game, the DB/LB ran back an interception 39 yards for a TD in the Colts 13-9 upset of George Halas' squad before 23,715 at Memorial Stadium in Baltimore. In his ten-year career, Bert made 31 of 89 FG attempts.
Bert carried all his money with him, leading the other players to call him the "First National Bank of Rechichar." No one knew where he lived. When Coach Weeb Ewbank finally released him, Bert asked Hawkins to give him a lift to pick up his belongings. Alex jumped at the chance to finally learn where Bert lived. Instead, Rechichar directed him to half a dozen back alleys and side streets where he picked up a pair of pants in this building, a jacket in that one, a couple of shirts here, a pair of shoes there. After an hour of this, Bert said, "O.K., that's it." Hawkins concludes: "Would you say that Bert Rechichar was a totally sane man?" 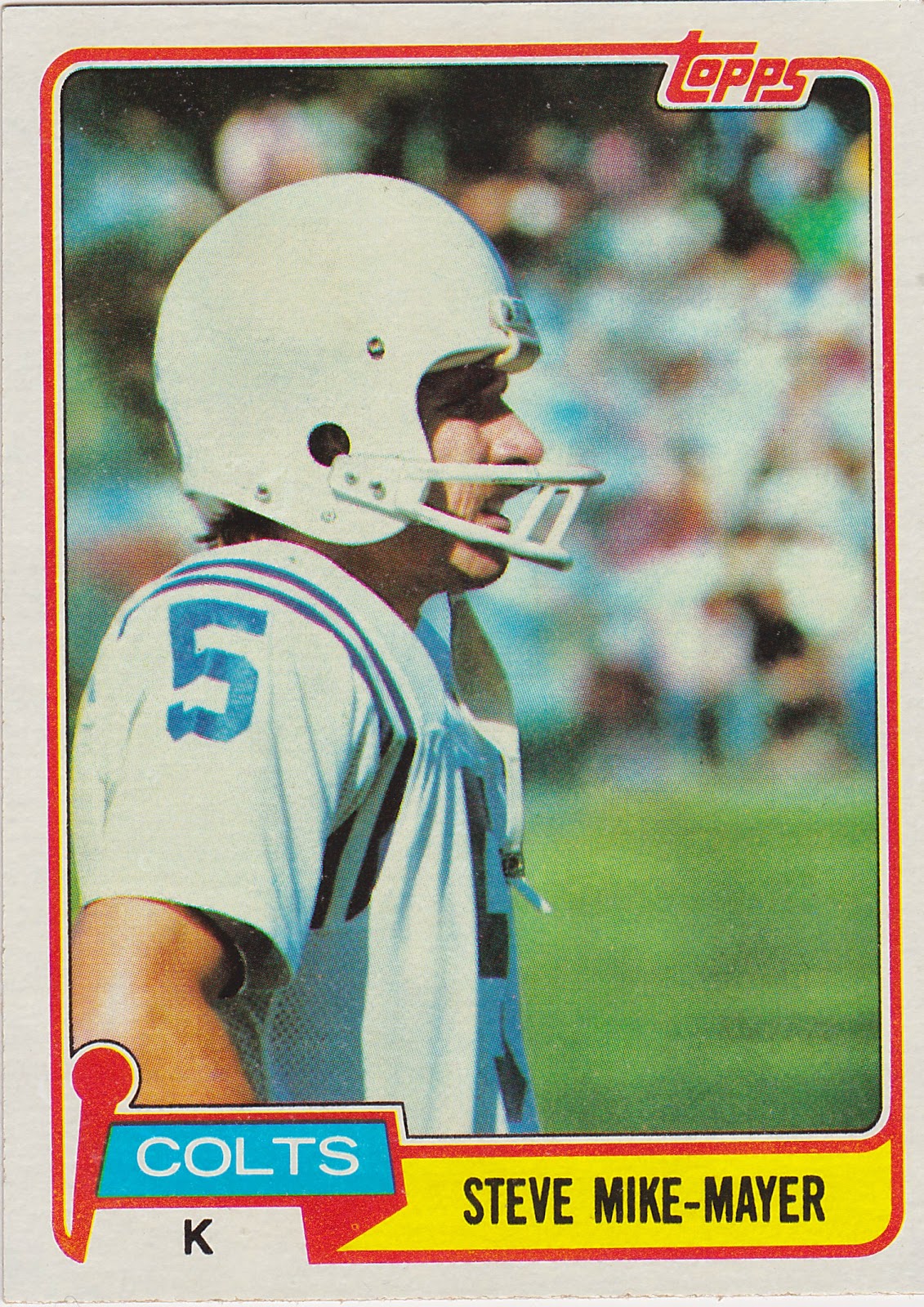 Steve Mike-Mayer. I got nothing. 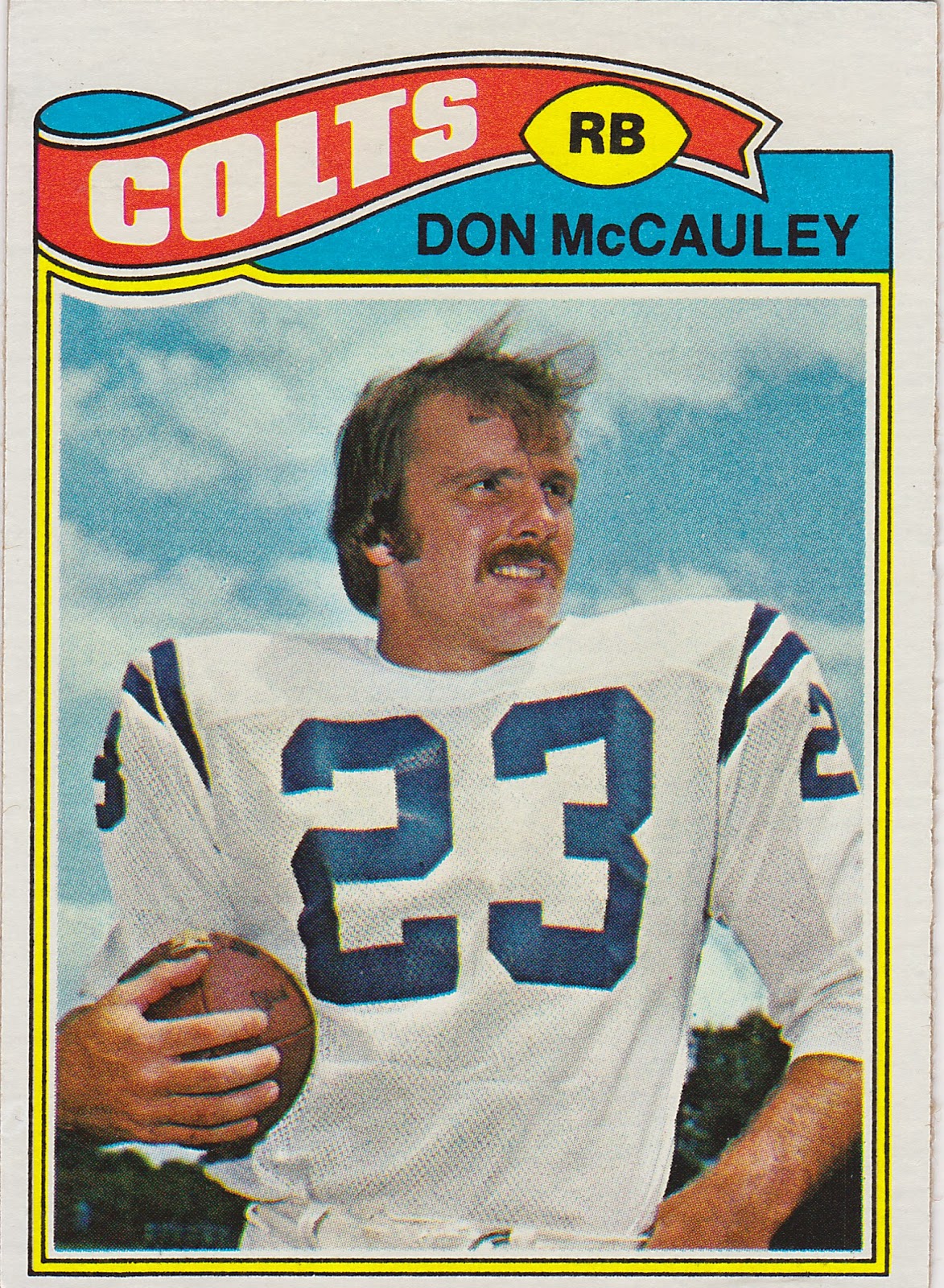 Don McCauley. The Colts got him with a comp pick to make up for the Dolphins tampering with Don Shula. That was a bad trade.
Posted by Commishbob at 7:00 AM