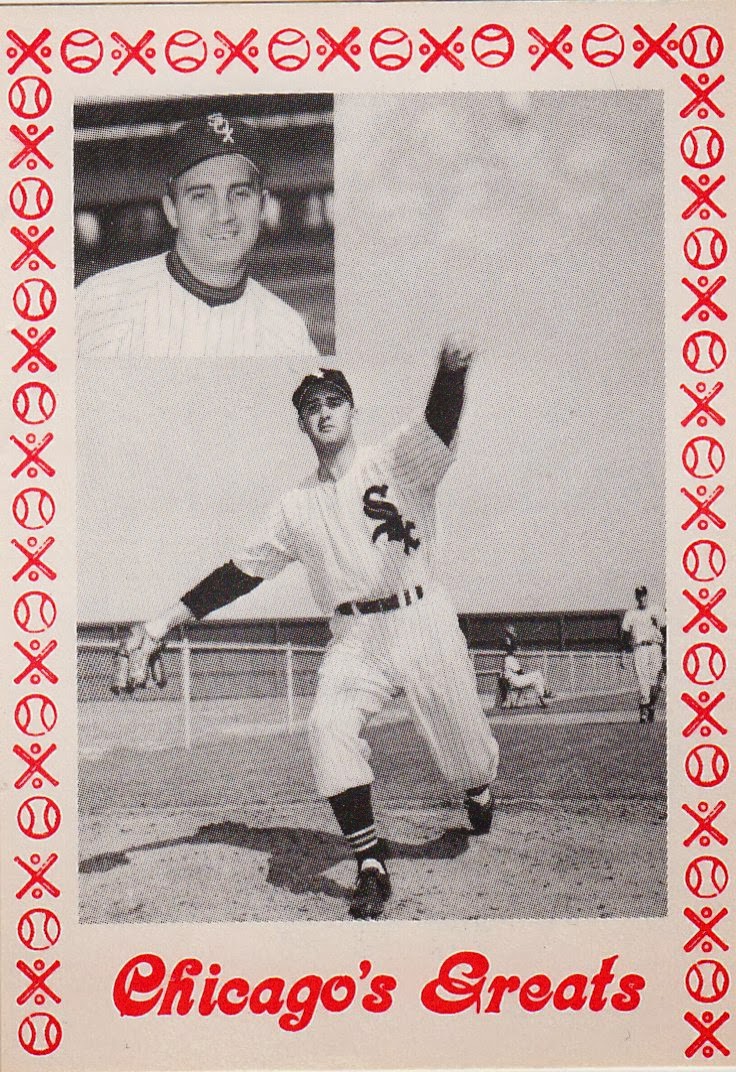 .....to remove this card from the case it was sealed in. I could have used my little eyeglass repair kit screwdriver like I did a few weeks ago to get my Billy Pierce Red Heart card from it's plastic crypt. But since that ended up putting a gouge in the top border of that sweet card I figured this time I'd just leave it to the Postal Service employees. And they came through in high style!

And here is the result! 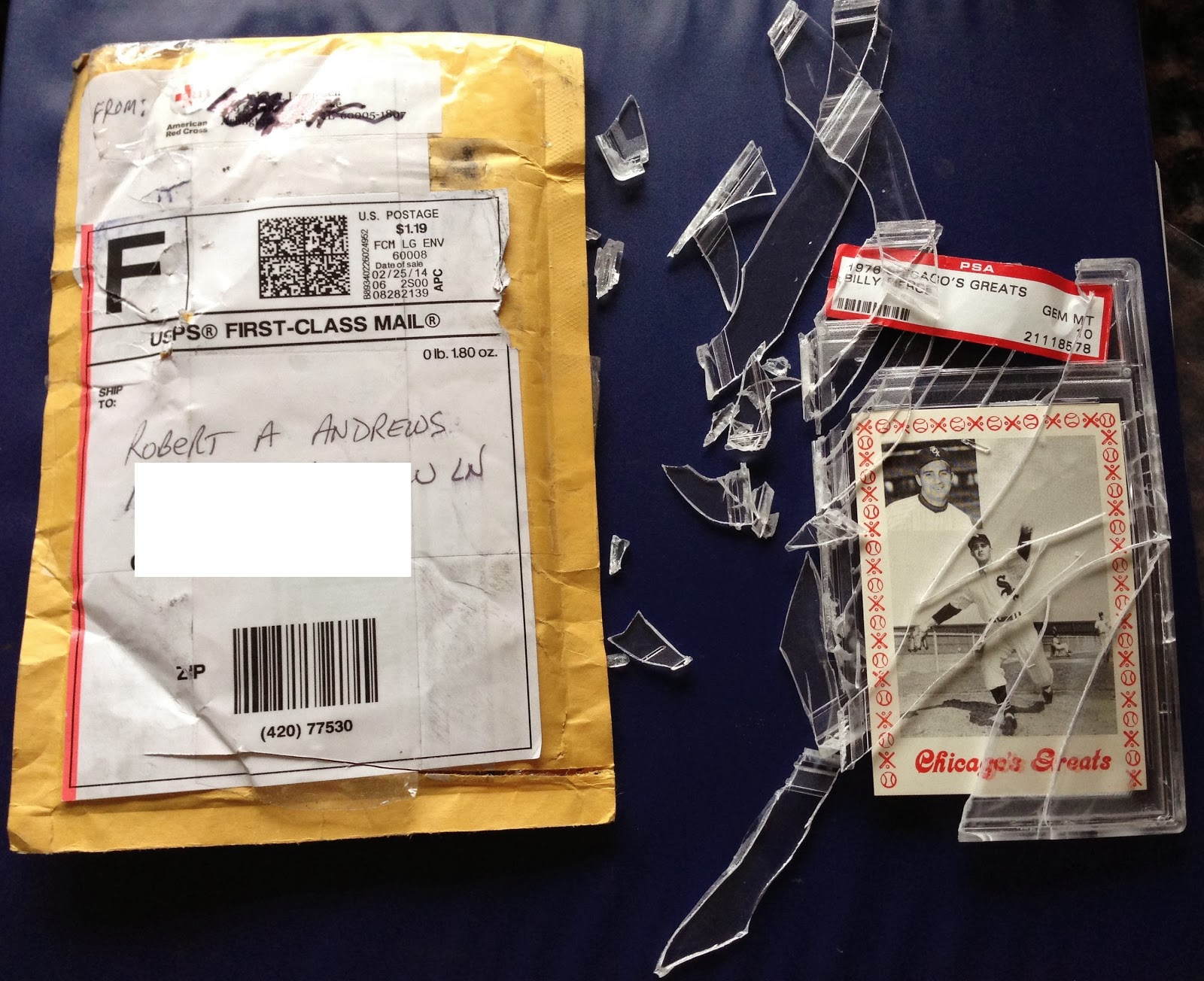 On Saturday I pulled that envelope out of the mailbox and something seemed amiss. The envelope was scarred and filthy. I have a little blade I use (carefully) for opening envelopes and I always make sure that whatever is inside is safely away from the side I'll slice. But when I gave this one a squeeze I didn't like the result. Whatever it was was obviously in pieces. So, with much trepidation I cut it open and out spilled ...well...this: 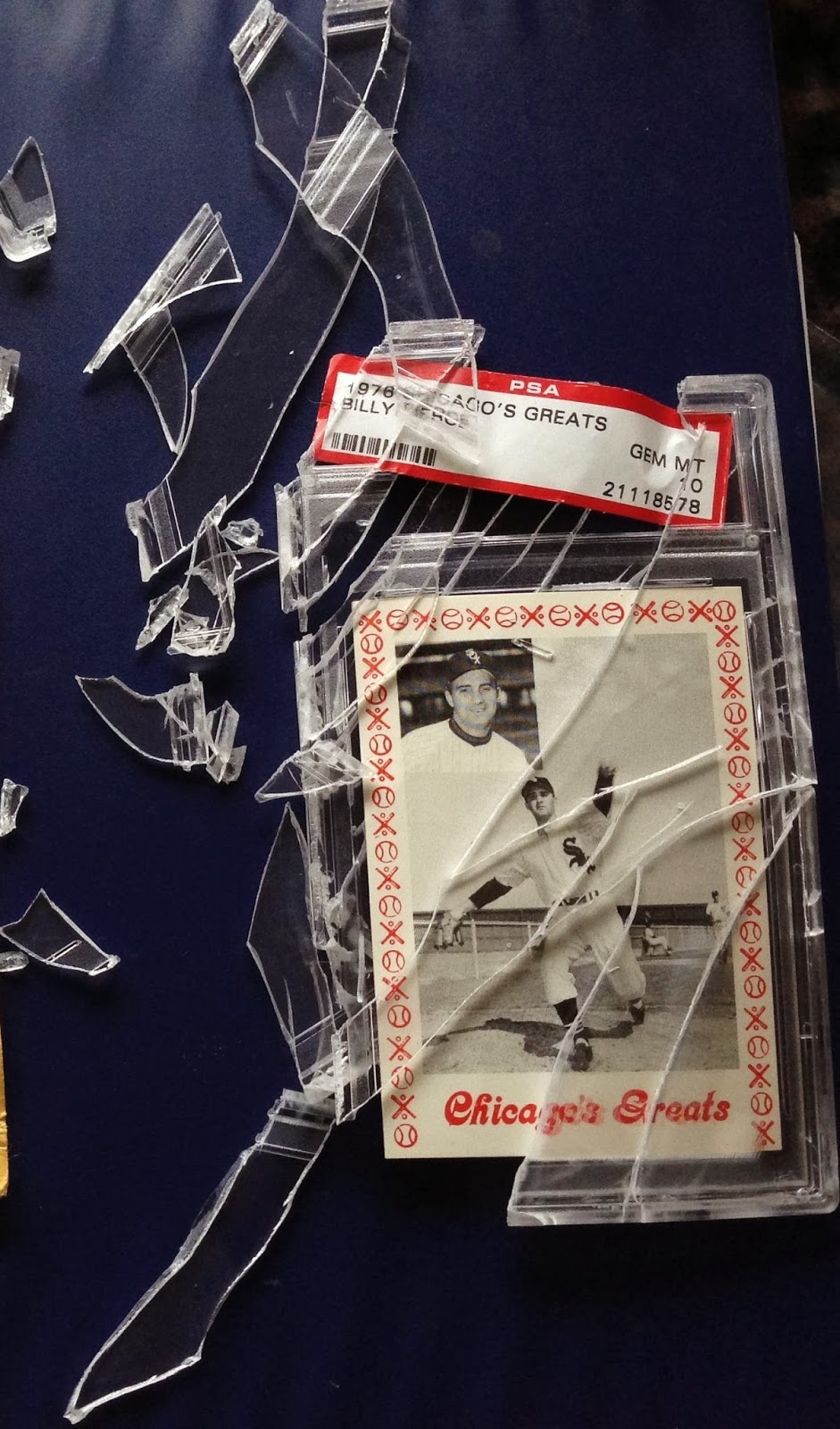 That's a Billy Pierce Chicago's Greats card btw. Hell, I don't even know much about the origin of this set other than the Standard Catalog of BBC states that it was issued in conjunction with a card show in the Windy City in 1976. There were 24 unnumbered cards in the set which sold for $2 or in uncut sheet form for $6.

Here is what it looked like in the listing. Why anyone would go to the trouble to get it graded is beyond me but what the heck, I wanted it so I bought it. 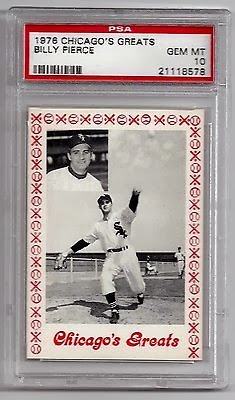 Hey, it's a GEM MINT 10!!!! OK, not so much anymore. The card actually came through it's little ordeal without too much damage. At least it didn't get torn or cut. It does have some creases, though. They are not easy to see in my pics but they are there. They run from bottom left to top right. Picture a fairly thin card that you pressed against the side of a large ribbed crushed tomato can, the kind you see at Costco.

It'll be fine in the binder. Hell, I have worse cards in several PCs, including Pierce. So I'll live to collect another day. I can't blame the seller. The card should have been safe in the case I guess. Maybe they could have written 'fragile' or something but I don't think that would have kept that envelope from falling under the wheels of whatever truck did the deed.

Just for fun here are a couple of other pics. In this one showing the back I think the creases are more visible than the others. 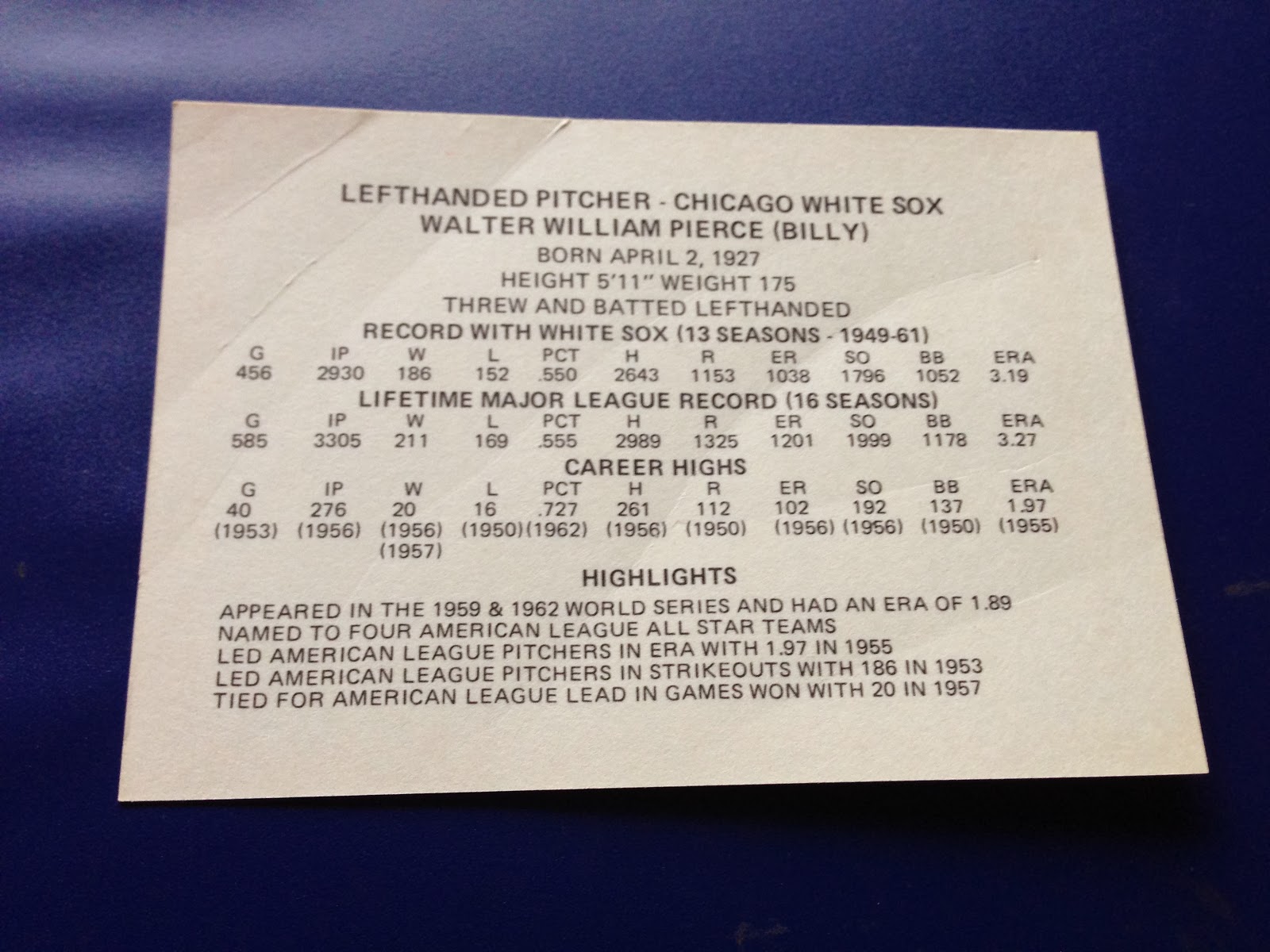 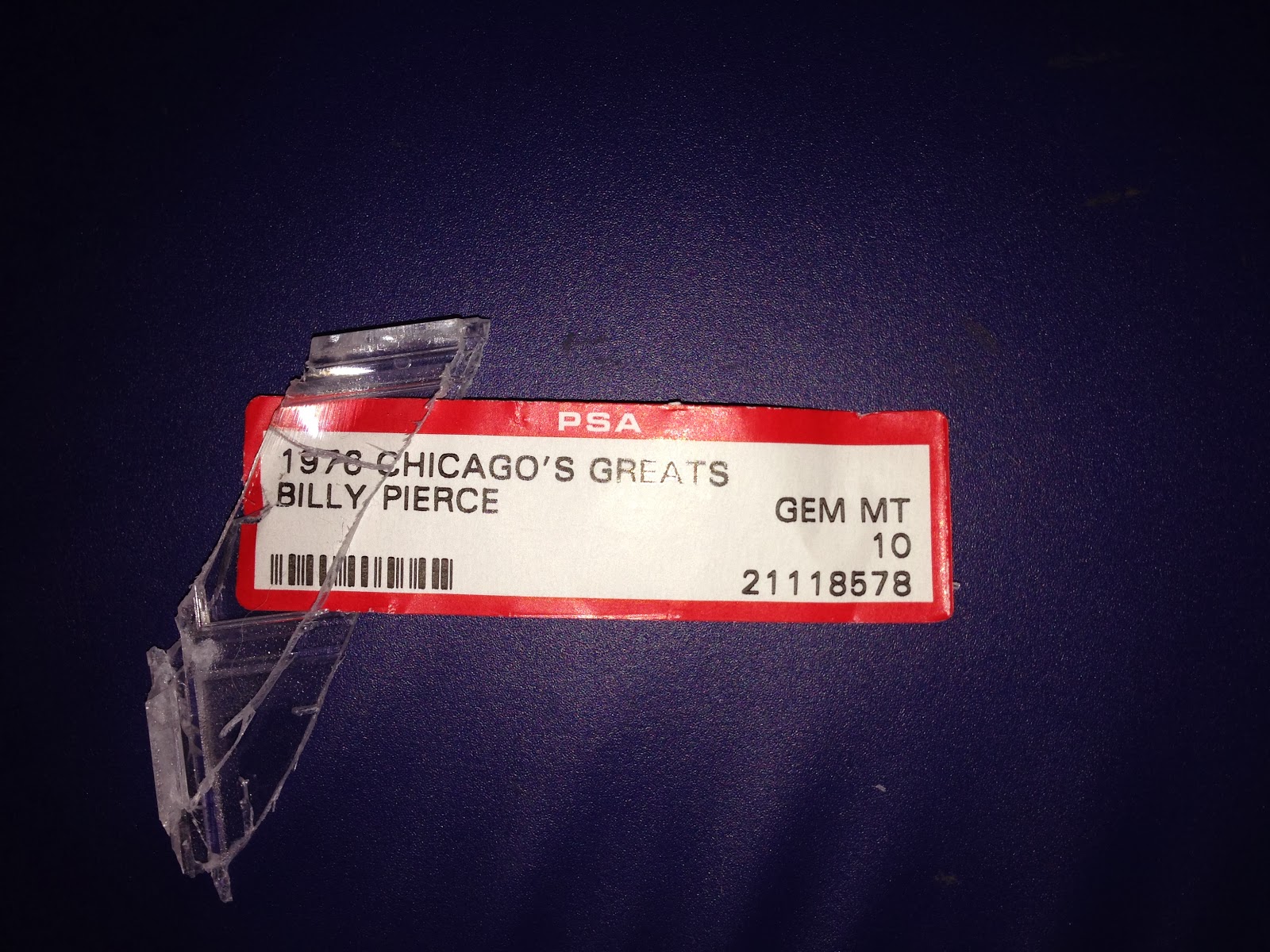 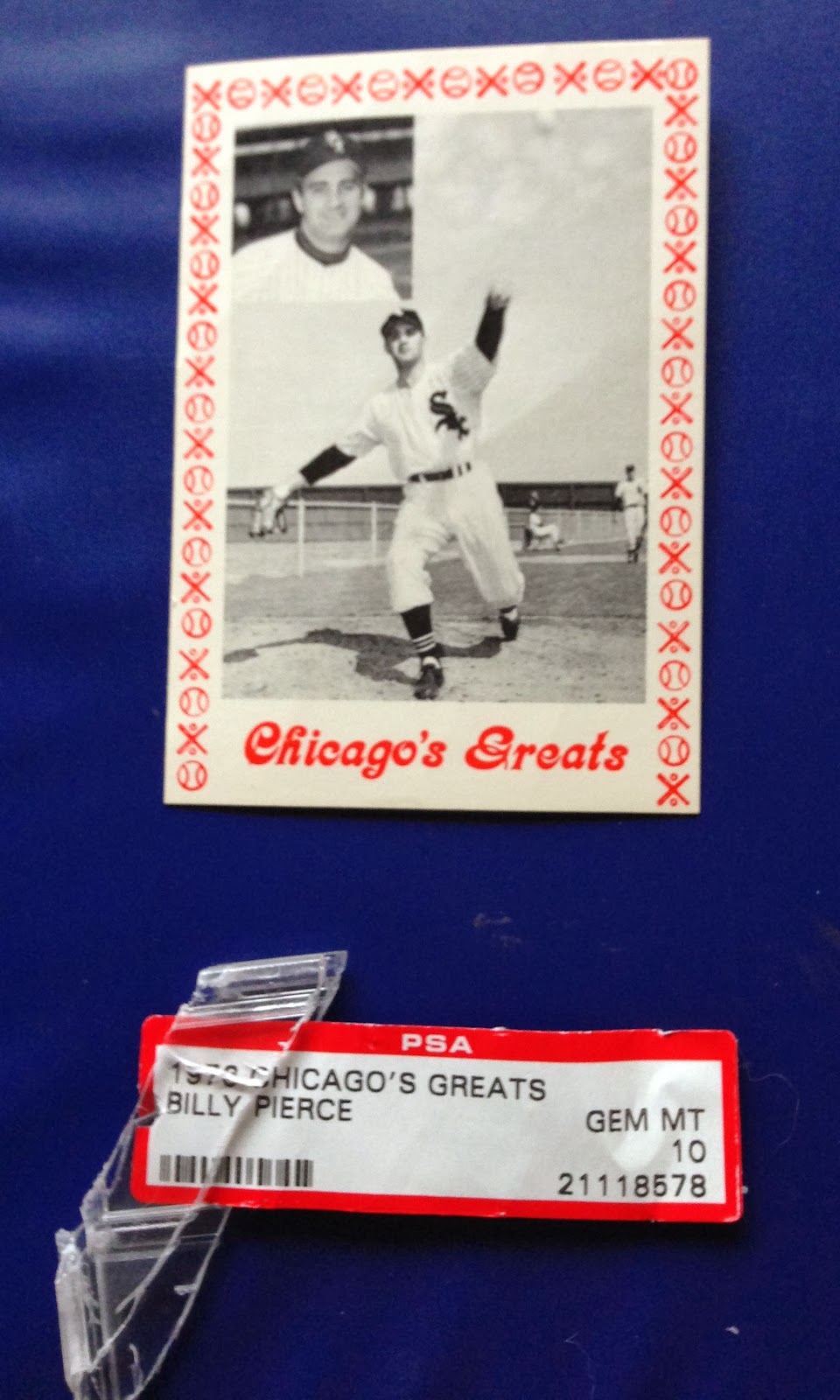 And finally the card as scanned and the reverse. Try to spot the creases. 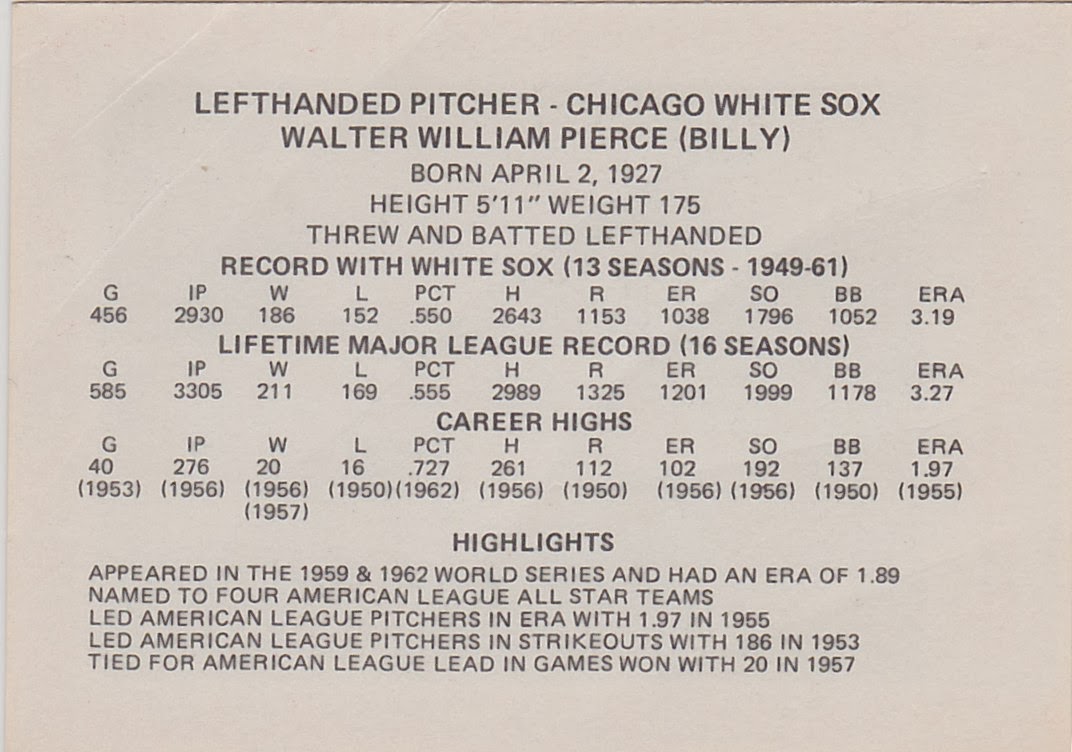 Welcome to my Pierce binder Gem Mint 10 Chicago's Greats Billy Pierce!!
Posted by Commishbob at 12:13 AM