Platter-full of O's from 'the Plate'

The best thing about getting an unexpected bundle of cards in the mail is that it's so, well, unexpected. One week ago a big ol' manila envelope arrived from Dallas and inside were upwards of 45 Orioles cards, 44 of which I not only didn't have but have never seen.

Even the one card I had is cool enough that having a second one is a good thing: 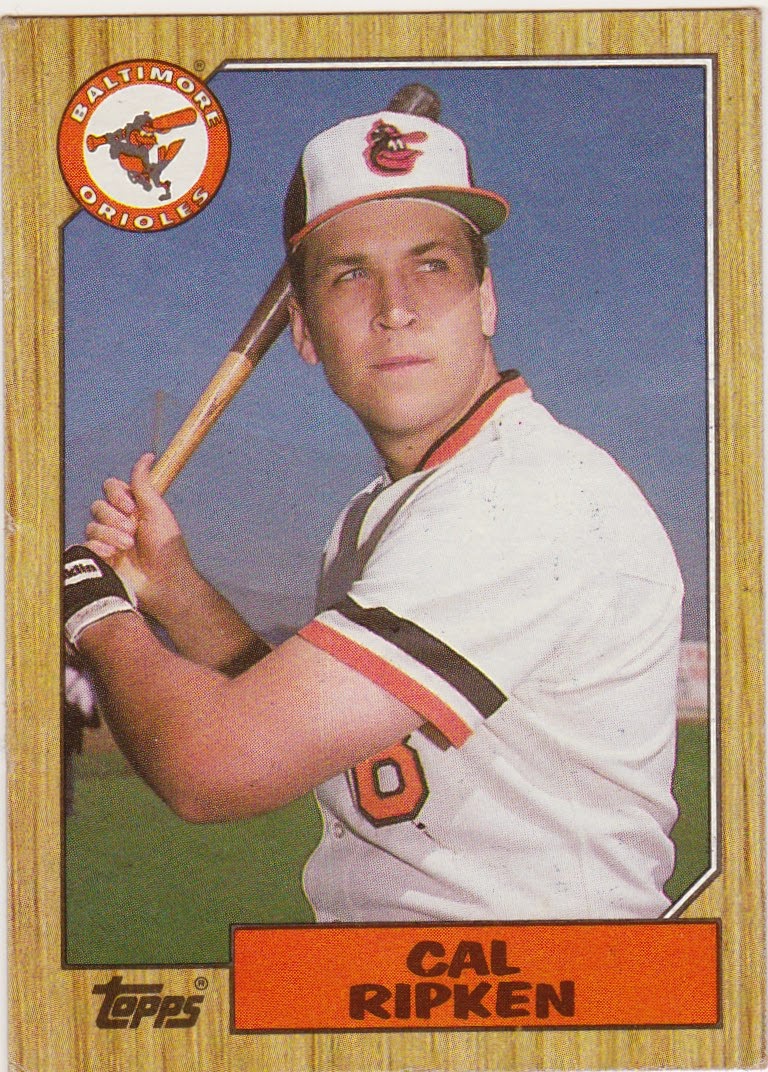 Cal looks so young and determined in this 1987 Topps. I love this one. Perfect 80s card. The rest were newer issues. And despite my sometimes curmudgeonly 'Get Off My Lawn!' persona making it seem like I don' appreciate the new stuff, that's always not the case. Take these for example: 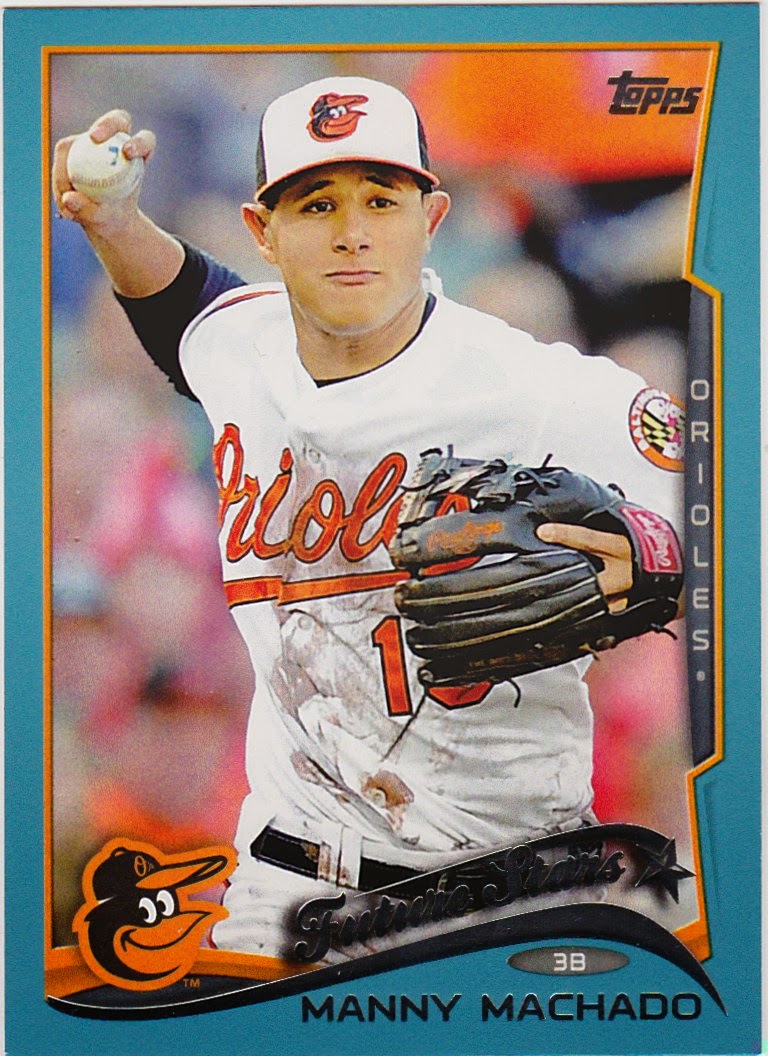 this is my first look at the 2014 Manny Machado card. I like the bluish border and the fact that while there is a lot going on here none of it detracts from a pretty neat picture of the O's third baseman. 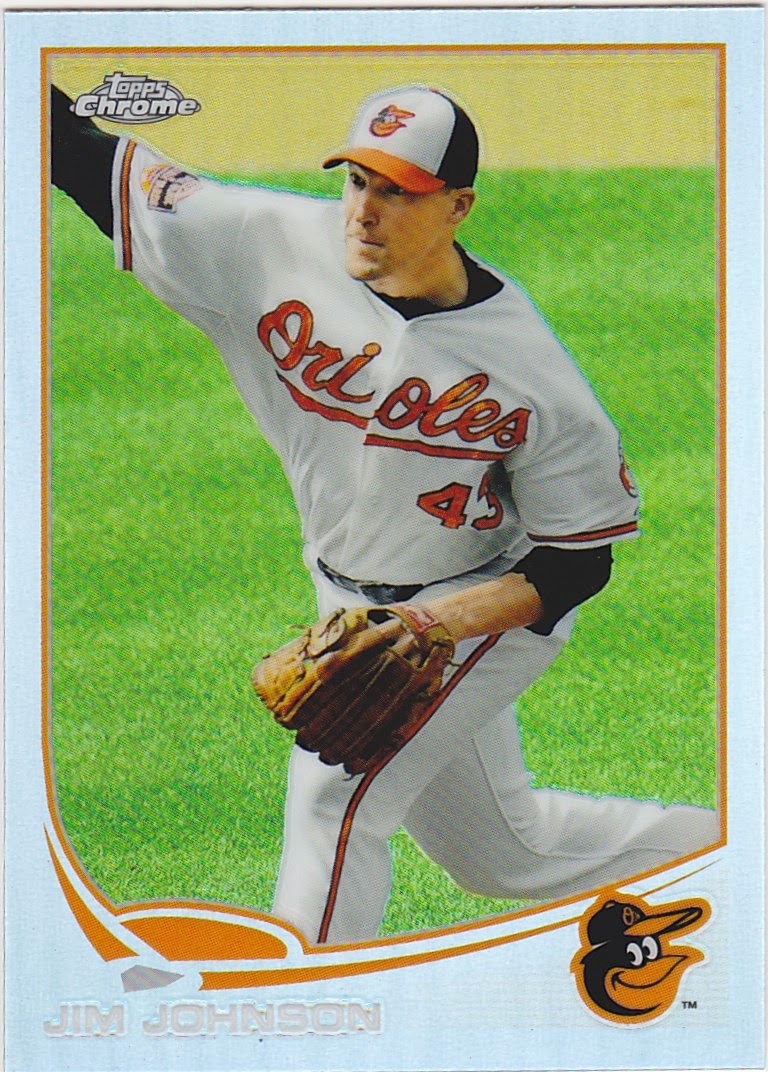 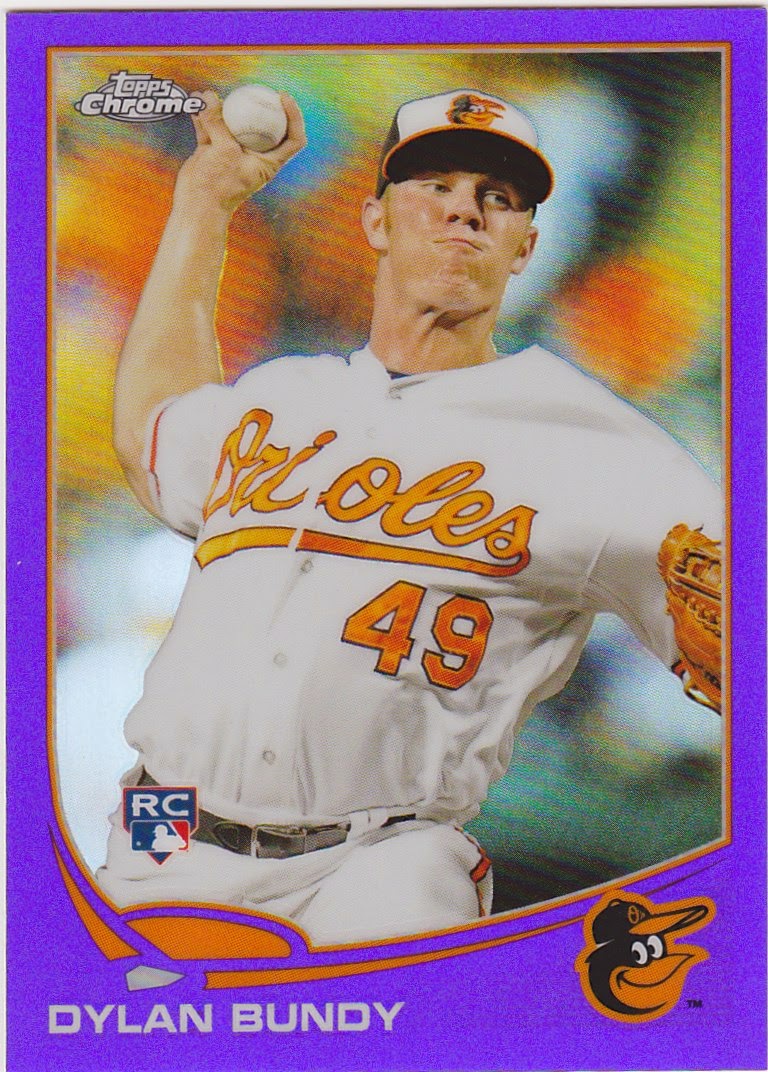 I'm not nuts about 'chromey' cards but I have not previously seen the styles of these two except in scans. They are way cooler in person. I have seen the red and blue (and a pink one) multiple times but never the silver or purple.

Next up is a reprinted 1971 World Series card showing Brooks Robinson doing what he did best. 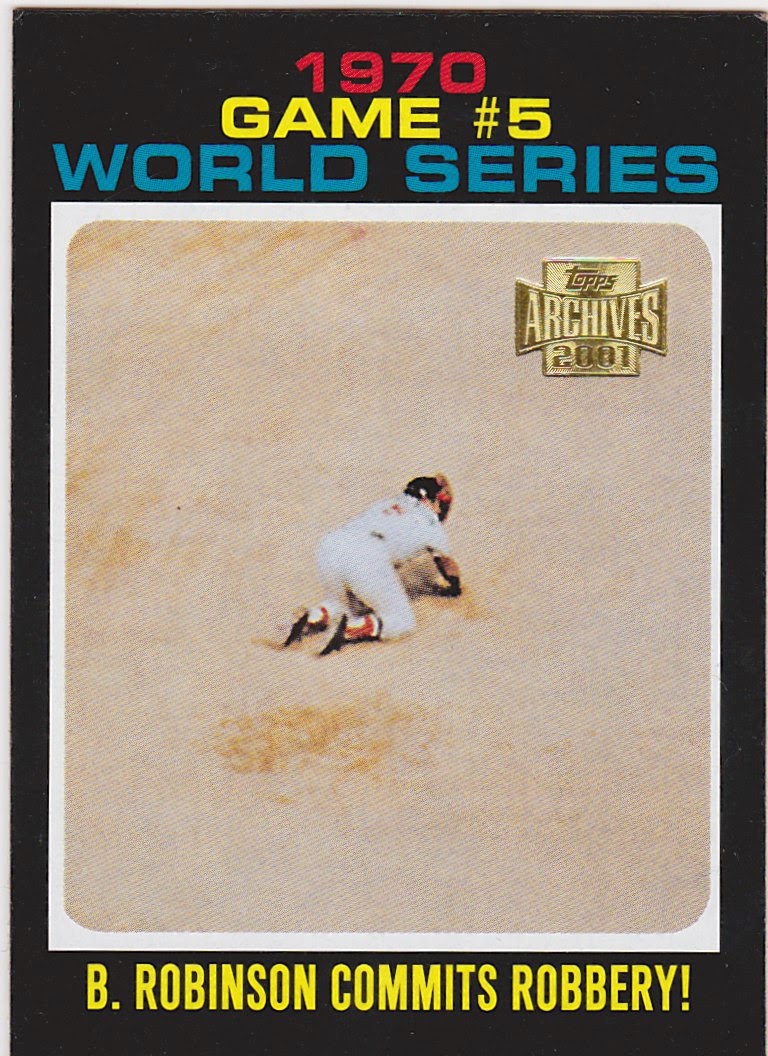 Three new Ripkens for the Ripken section of the O's Stars binder. 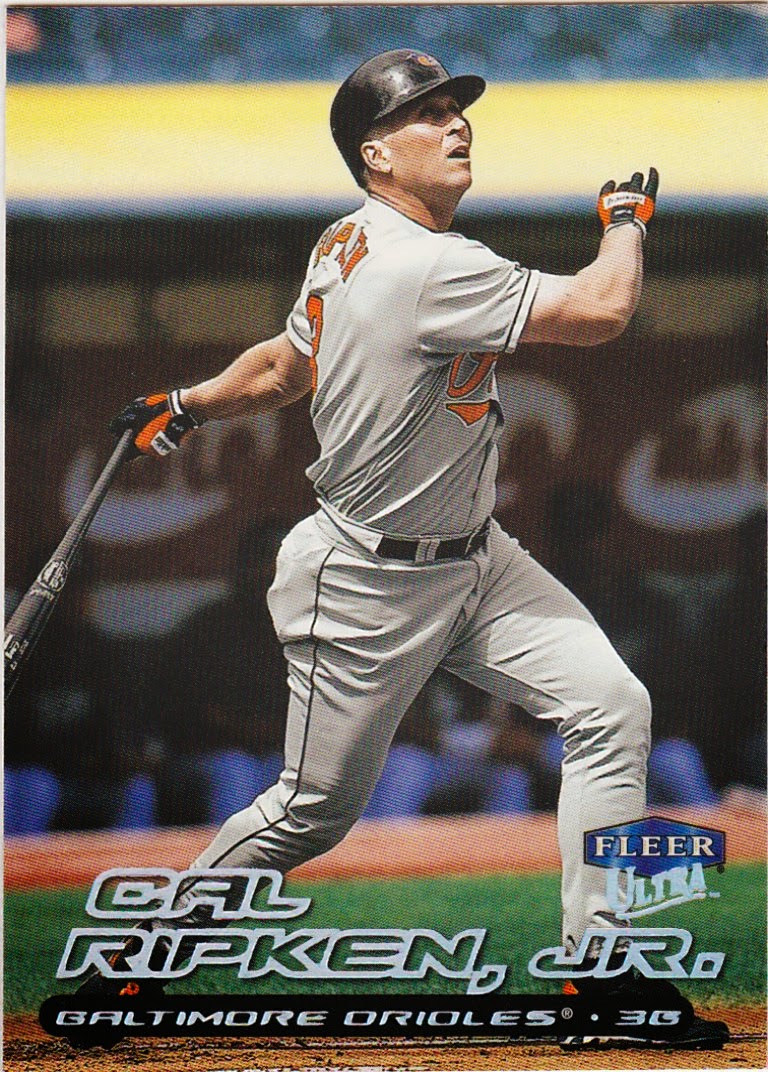 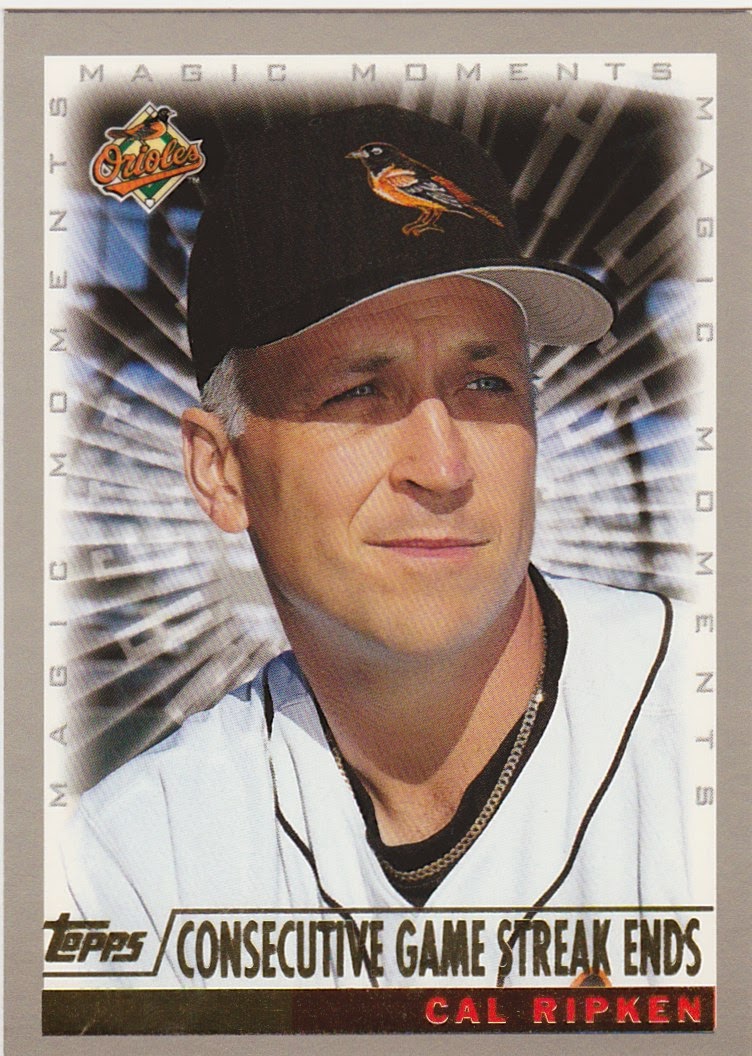 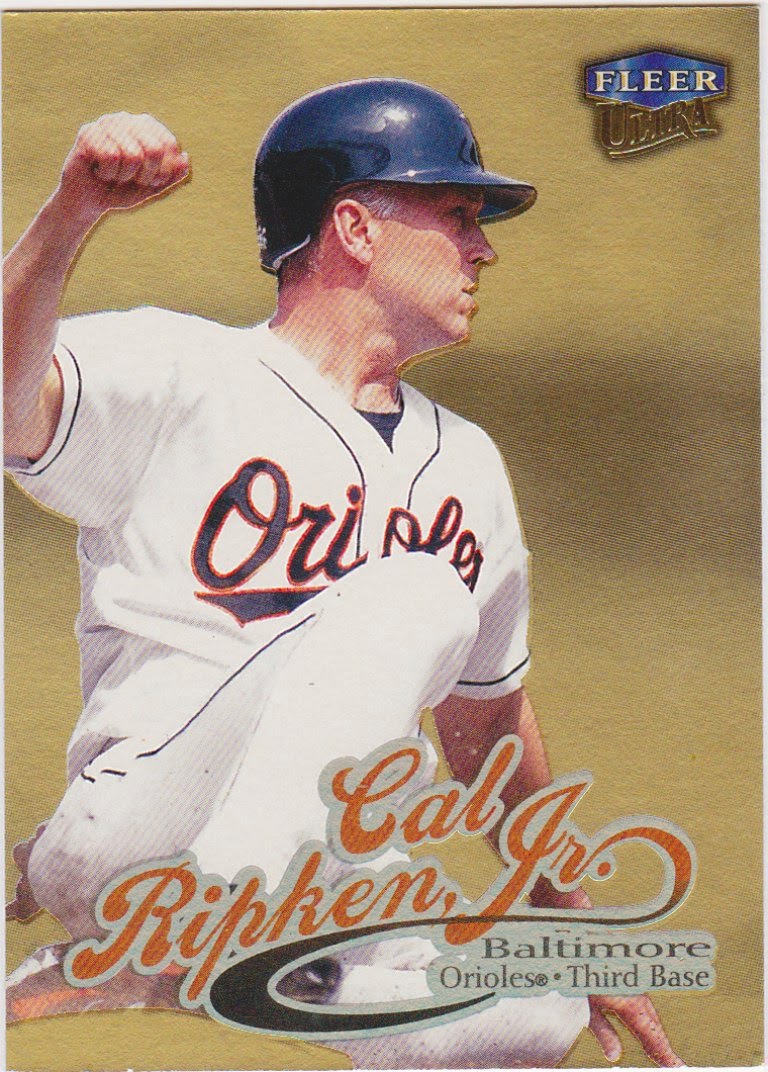 This was maybe the most interesting card. Ryan Minor on a clear plastic Sky Box card. The player image is raised off the clear plastic. I can't imagine how they 1) thought of that and 2) figured out how to do it. 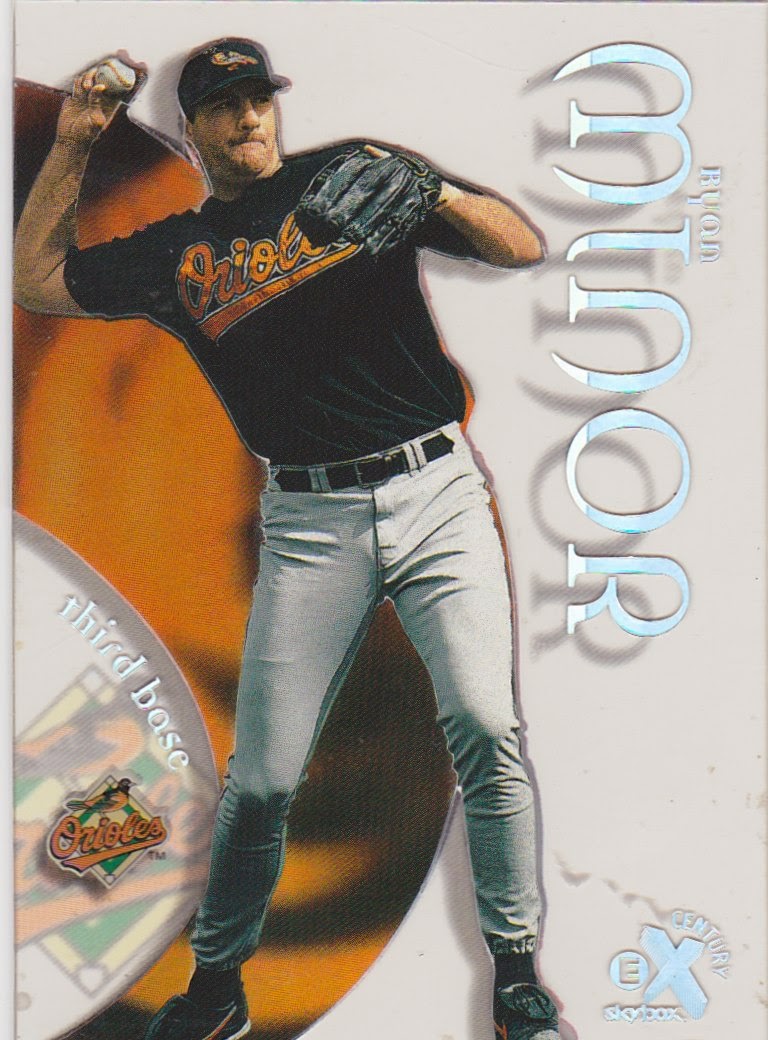 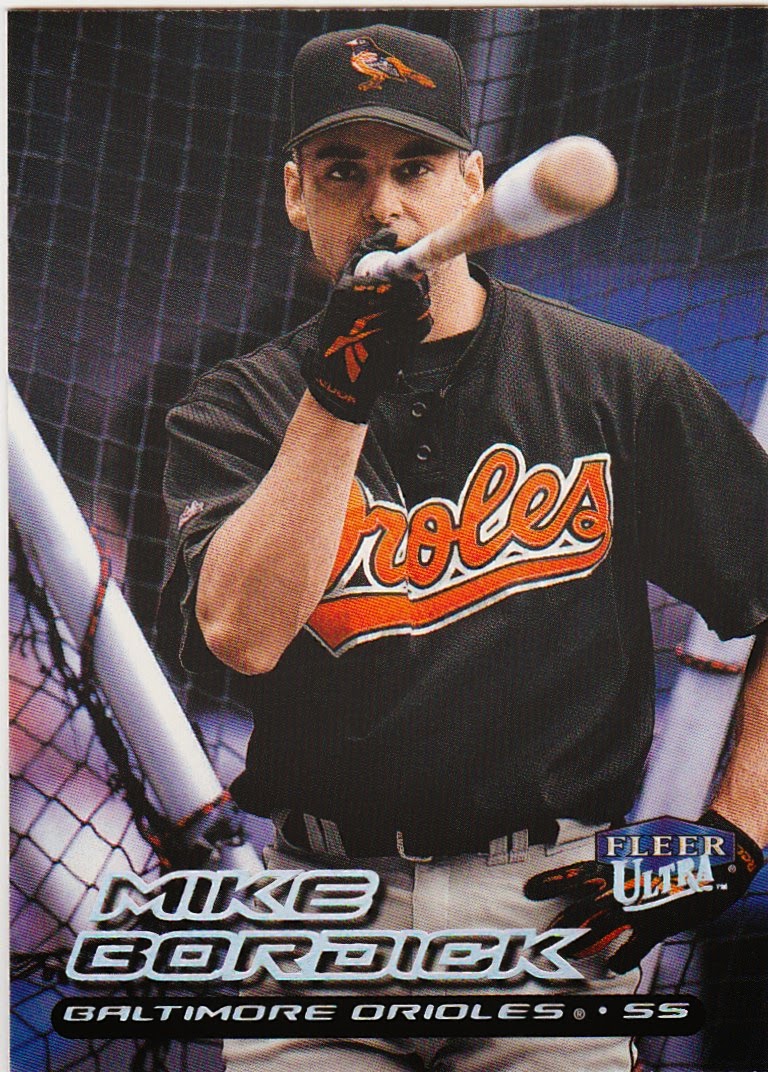 Mike Bordick appears to be pointing someone out to unseen teammates. I get a Yankee Stadium vibe here. He's probably telling someone that "the guy with the laser pointer thats screwing with us is ....sitting.....right....THERE!!" 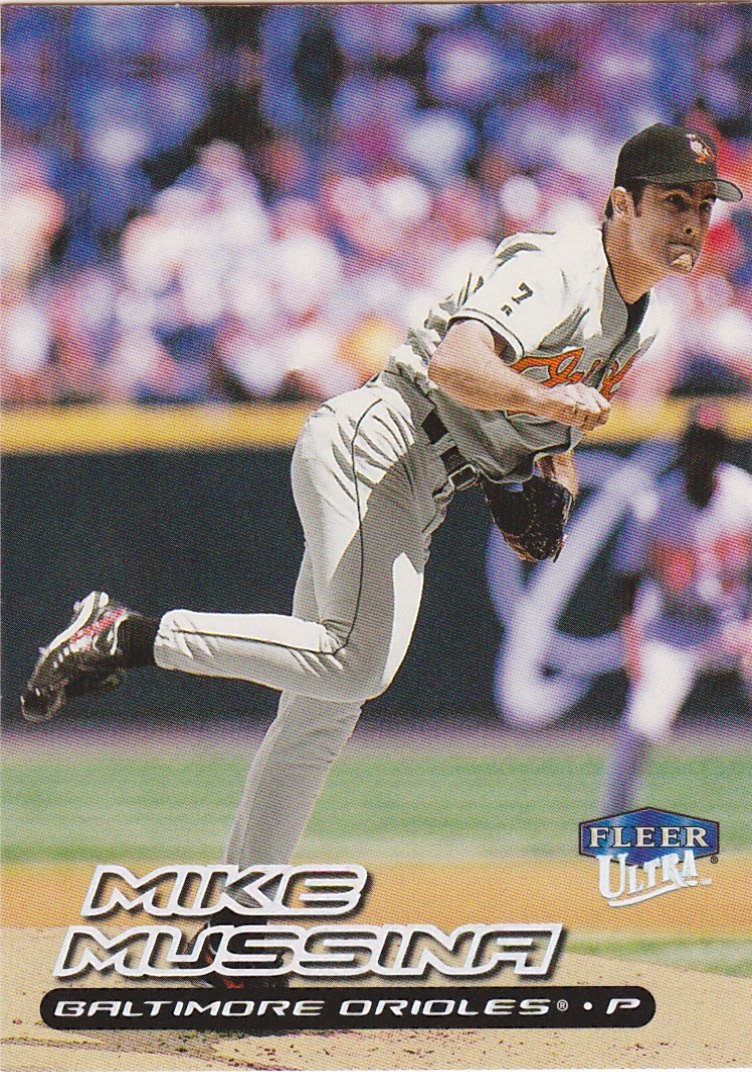 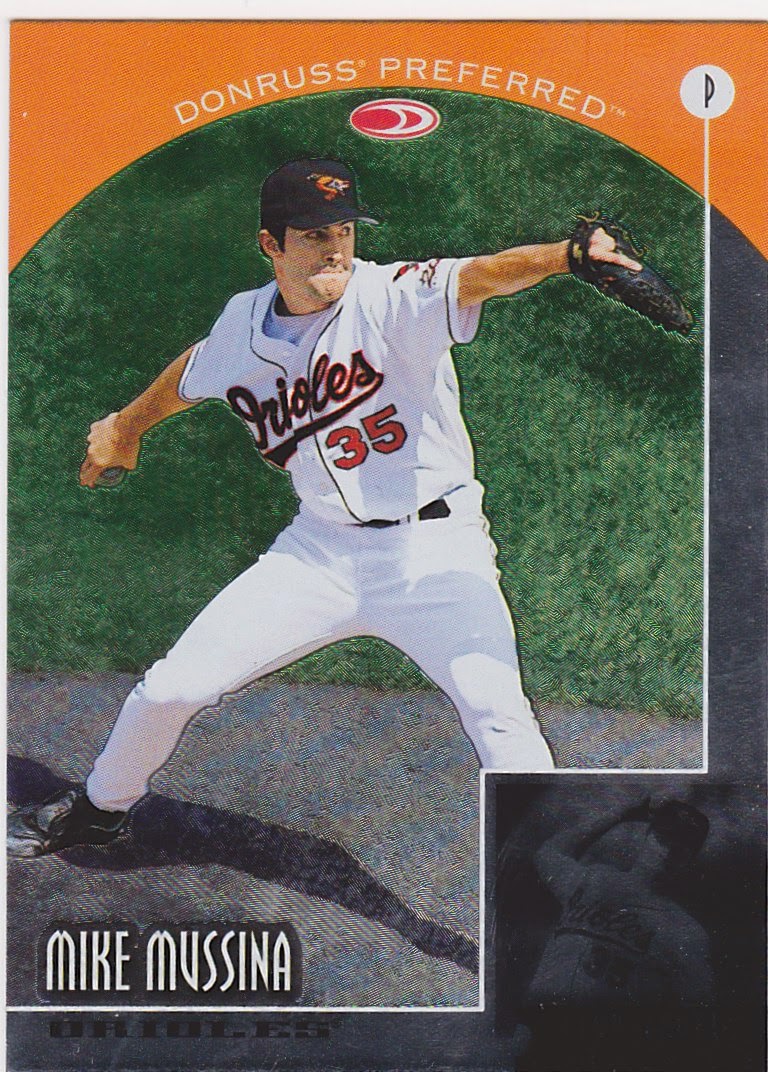 Donruss Preferred Mussina. Never have seen anything from this set. Not bad at all. 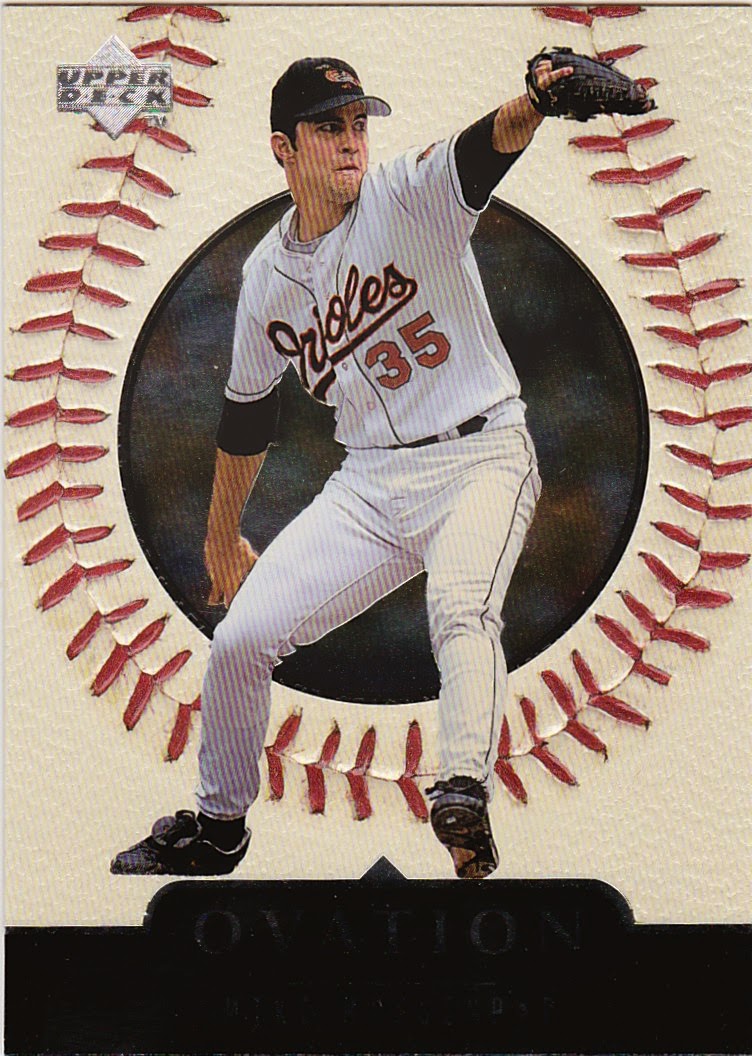 And an Upper Deck Mussina. I know I'm supposed to hate this guy since he gave the Orioles the big brush off for the Yankees. I'm getting too old to hate guys. What hate I can muster I reserve for Robert Irsay, and he's already 15 years dead so I'm wasting emotion on his ghost I suppose. 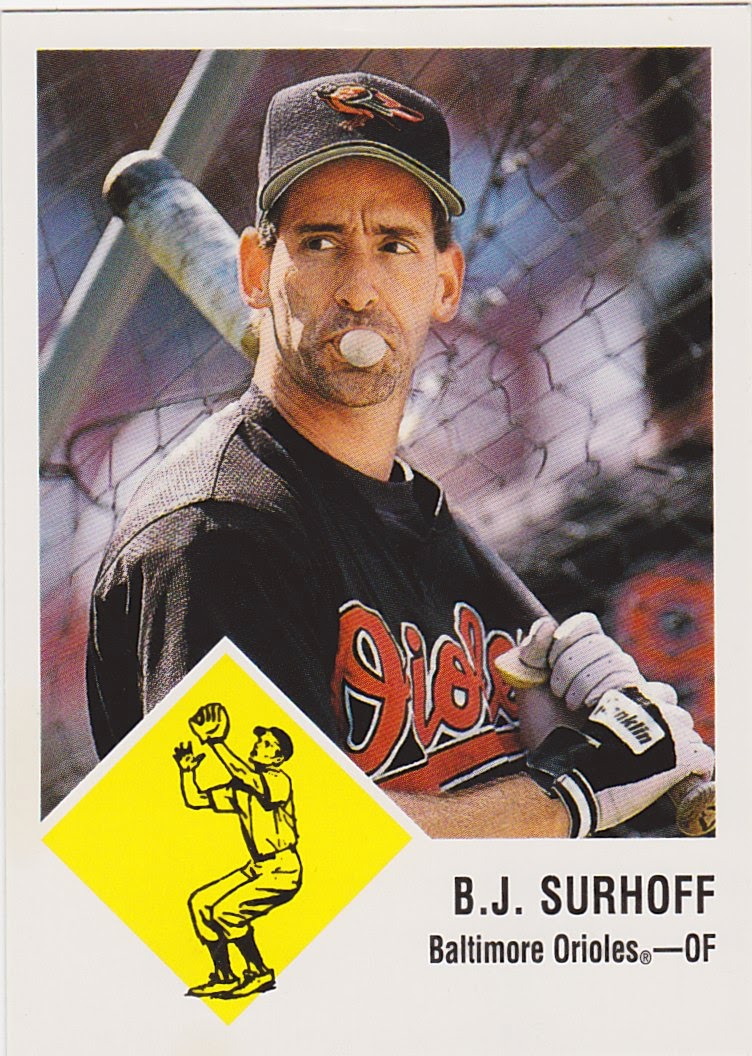 I pretty much missed the B.J. Surhoff era in Baltimore. He came and went (twice) while I wasn't looking. Awhile back I did some reading up on him. Seems like he was a helluva guy, gritty and straightforward. And he got traded after his best season with the Orioles. I just now found out that he had kids who swim collegiately at North Carolina and the University of Texas. '63 Fleer clone card, nice.

There were several cards of Brady Anderson included. This is a Topps Stars card. Was this part of a regular set? 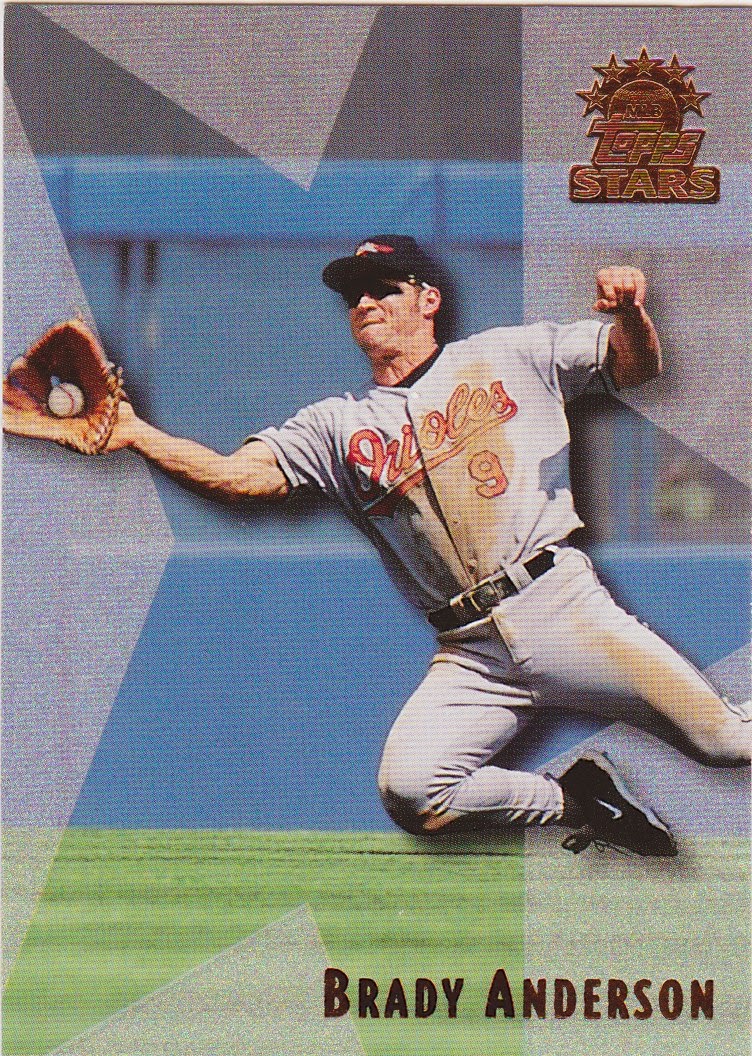 This next Brady may get passed on to Ana from Hobby Cards Europe. She has collects cards of players causing, well, dust to fly. And I bet she'd like Brady himself, too. 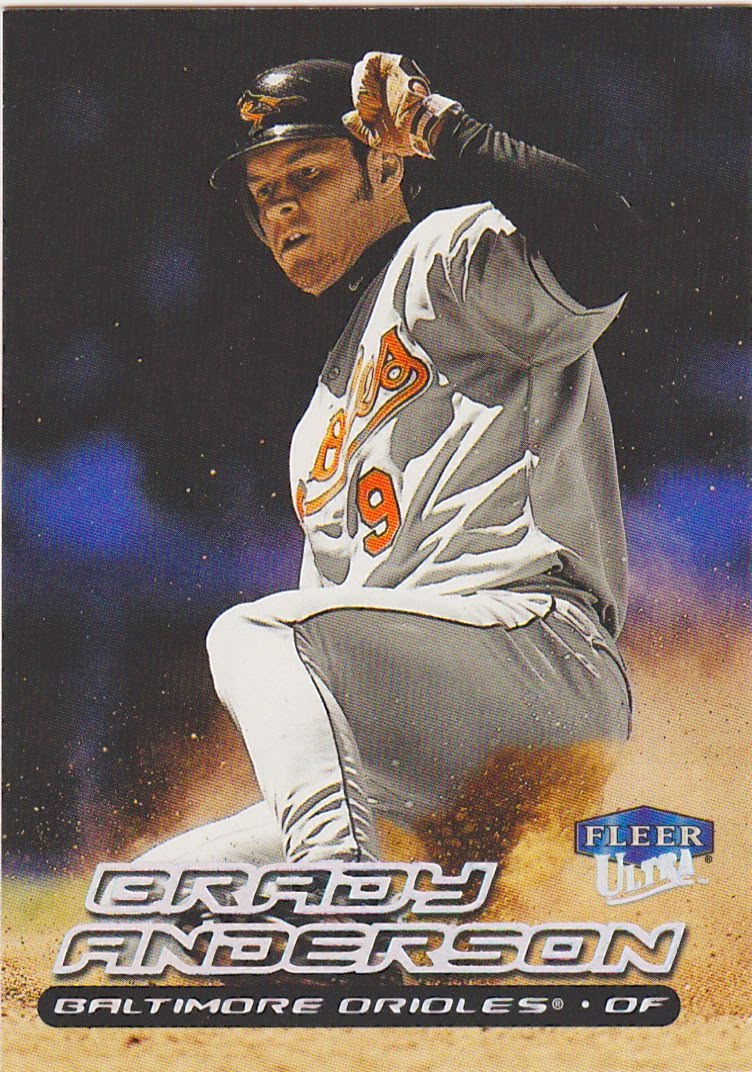 And there were plenty more. Diecut cards, shiny cards, glossy cards, chrome cards, and all manner of combos of those. One of the best packages I've received, for sure.

Thanks, Brian! Much appreciated. I'm going to check wantlists for Rangers I might have in my boxes, Senators as well.
Posted by Commishbob at 5:00 AM

Email ThisBlogThis!Share to TwitterShare to FacebookShare to Pinterest
Labels: packages, Play at the Plate, trades