I will NEVER get used to this!! 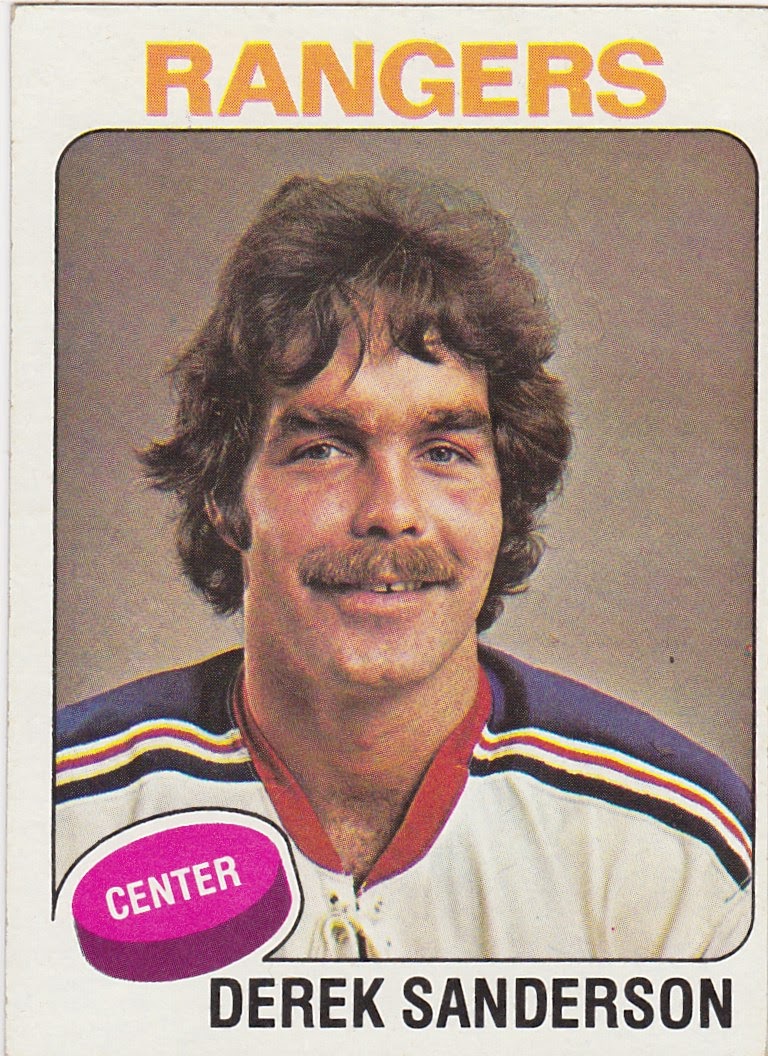 Never, never, never. It goes against nature. Derek Sanderson as a Ranger? Hell Johnny U. on the Chargers didn't shock me as much as this. That 75/76 Topps card won't even have a place in my Rangers binder.

But hockey has always had a lot of cross-pollination. At least during the days of six and then 12 teams. Players were moved around a lot and with that few teams the odds of a guy you disliked landing on your favorite team were not all that long. But saying I 'disliked' Derek Sanderson is like saying Hell is 'warm'.

Which brings me to the video below. On April 5 of 1970 my parents were house shopping in Houston. I was glued to the radio in Jersey as the Rangers were in a wild battle for a play-off spot. It was the last day of the regular season and the Rangers needed to beat the Red Wings (they had lost to the Wings the night before) and have the Black Hawks beat Montreal.

But they needed more. Even if the games went their way the Rangers would have been tied with the Canadiens and out of the playoffs on goal differential versus Montreal. The Rangers had to win AND score five more goals than the Canadiens! The Rangers played in the afternoon and went off the rails trying to score. The fired about sixty shots at Roger Crozier and scored a 9-5 win. They had even pulled Eddie Giacomin out of the goal leading 9-3 in an attempt to up their total.

When that game was over WHN in New York announced that they would pick up the Montreal-Chicago broadcast so I sat and prayed next to the radio for another three hours that night. The Habs needed to score five goals, even if they lost. Those five goals would have given them the last playoff berth. Try as they might the Canadiens could not do it. The Hawks had something riding on the game, too. They needed a win to finish in first place. They went ahead 5-2 in the third period and Montreal pulled their goalie trying to add goals. But Chicago hit the empty net five times and won 10-2. I'd never experienced anything quite like that Sunday.

On Monday, the Rangers put playoff tickets on sale and with my folks out of town I didn't have much problem skipping school, taking the train into Manhattan and lining up with my buddy outside the Garden. We got tickets for the third and fourth games. I remember that our seats were about the last available pair and they were high up behind the goal. They were in an area of the Garden that didn't even give you a full view of the ice unless you stood up, or even better, stood on your seat, which is what we did.

And Game Three turned out to be a doozy. The Rangers and Bruins had been mixing it up in Boston during the first two games and the Garden was rocking even during the pre-game. Right from the opening face-off things got crazy and as it turned out the game set records for penalties. Until today I had never seen any video of the game. This clip is four minutes, about a third of which is foolish fluff but the rest is serious hockey bidness.


Too bad they didn't have any video of Sanderson shooting the bird at the Garden faithful as he exited the ice. From that night forward he was 'evil incarnate' and the thought of him ever actually playing for the Rangers was, well, beyond anything I could comprehend.

The Bruins went on to win the series and eventually the Stanley Cup over the Blues. I skipped school again and tried for Game Six tix with my girlfriend but got the shutout. Rangers lost anyway so it's OK. Derek Sanderson wore out his welcome in Boston (twice), spent time in the WHA, became an alcoholic and got traded to the Rangers.

Funny how things turn out.
Posted by Commishbob at 6:00 AM