The American League managers in the '60 Topps set have some interesting photos and back-stories.

Casey Stengel needs no words from me. He's Casey. Paul Richards (his middle name is 'Rapier'... how cool is that?) was a baseball 'lifer' who managed the White Sox and Orioles among the numerous jobs he held in the game. He was the Tigers' regular catcher during the mid-40s and helped them win the 1945 World Series. BTW.. his 1933 Goudy is IMHO among the best baseball cards ever produced: 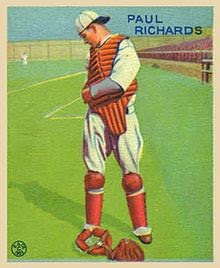 I like the fact that Memorial Stadium is visible on Richards' managers card.

Al Lopez played in the majors for 19 years and managed for another 17 winning pennants with the Indians and White Sox. After a 22 year playing career Jimmy Dykes managed six different clubs in the majors, mostly with the White Sox. He never won a pennant.

I love the Nats uniform worn by Cookie Lavagetto on his card. The 'reverse drop-shadow' "W" and pinstripes and not features I usually associate with that team. Billy Jurges never managed a full season. He was hired during the '59 campaign by Boston and fired during May of 1960. He was a three time NL All Star middle infielder.

Joe Gordon's card shows Municipal Stadium in the background. A nice touch. Joe Gordon played for 11 seasons with the Yankees. He made nine All Star squads and was the 1942 AL MVP. His managing record isn't nearly that good but he is a Hall of Famer.

Bob Elliott is shown in his only year as a big league manager. His playing career covered 15 seasons. He hit .289 and he was selected to multiple All Star squads and was the 1947 NL MVP with the Boston Braves. His nickname was "Mr. Team". And while his card makes him look like everyone's favorite goofy uncle he is not to be confused with the Bob Elliott who made up one half of the radio comedy duo of Bob and Ray. Look 'em up, kids.

Here is a look at the backs of a few of these. I've included the Jimmy Dykes card because it's about as pristine a 1960 card as I've seen outside a grading slab. The back is even whiter than the scan shows. The backs of the '60 set cards tend to brown over time as shown in the Gordon and Alston cards. Jimmy Dykes has escaped that fate for whatever reason. Sharp corners as well.