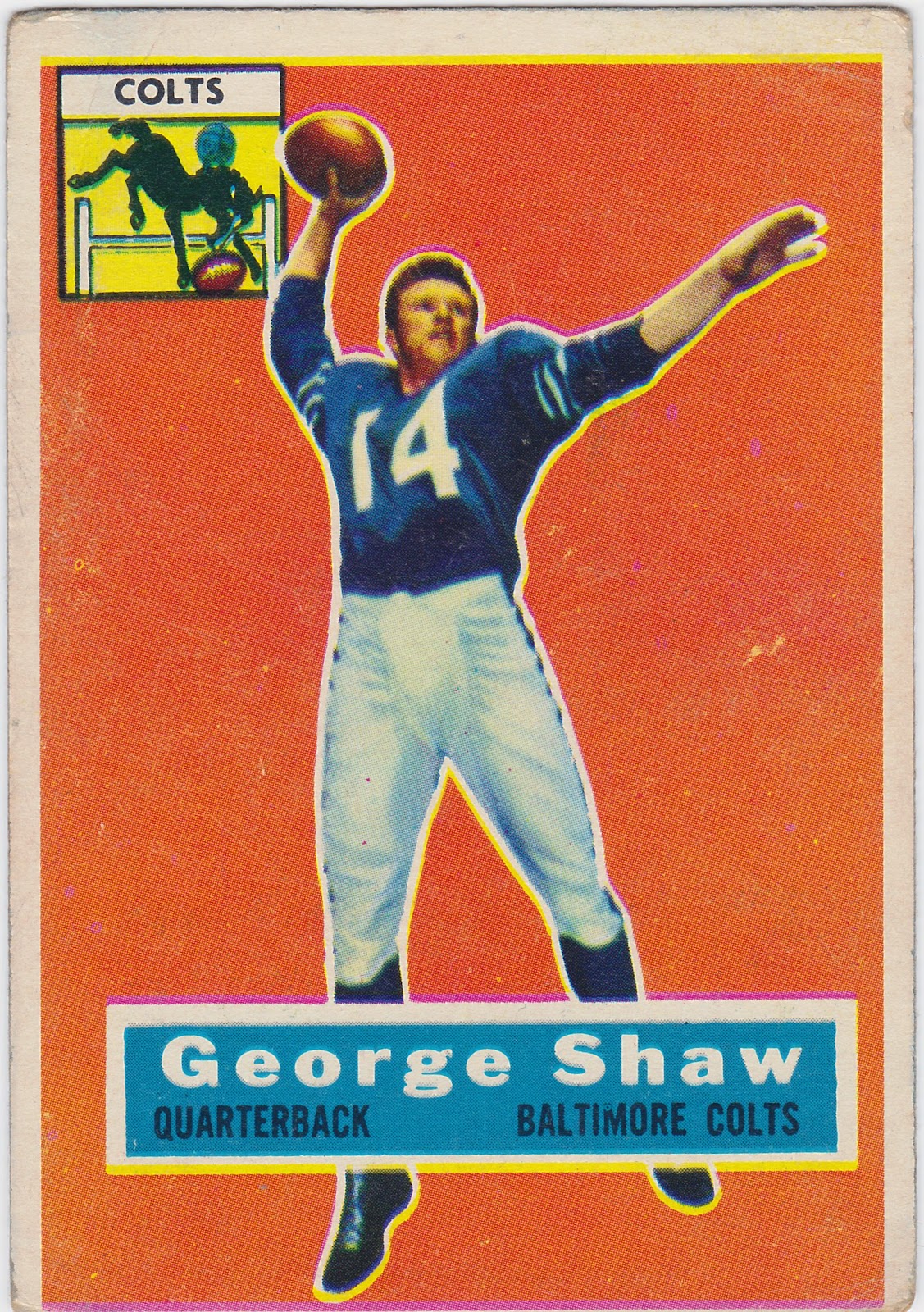 I knew going in that my Baltimore Colts vintage card quest would mean two things. First of all I'd have a big project that would be fun and occupy my time for months and second of all the posts that came out of it would be mostly ignored.

So be it. I know football cards are not particularly popular in the blogging world but ya gotta do what ya gotta do, and so here we are. These three '56 Topps cards are part of my recent eBay binge. And they are probably typical of the cards that will fill out my checklists, used but not abused.

George Shaw is the 'guy before Johnny Unitas' in my Colts' addled mind. He was drafted in '55, started that season and then lost his job to the great Unitas in '56 following a minor injury. Here is something I just learned today...Shaw was the Vikings starter in their first game ever. He played the first half of their 1961 opener against the Bears, went 2 for 3 passing and made way for Fran Takenton. I see a pattern here. 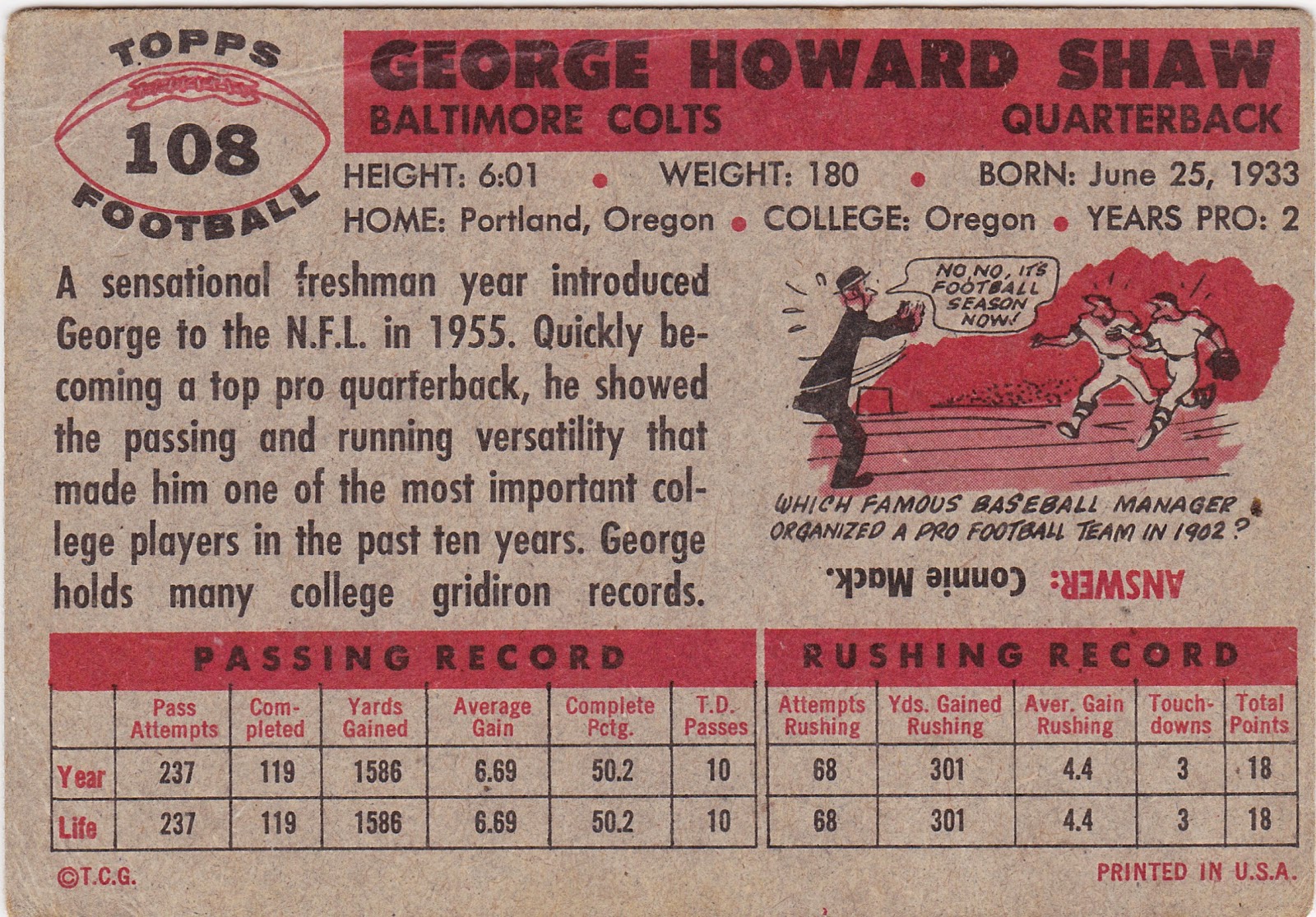 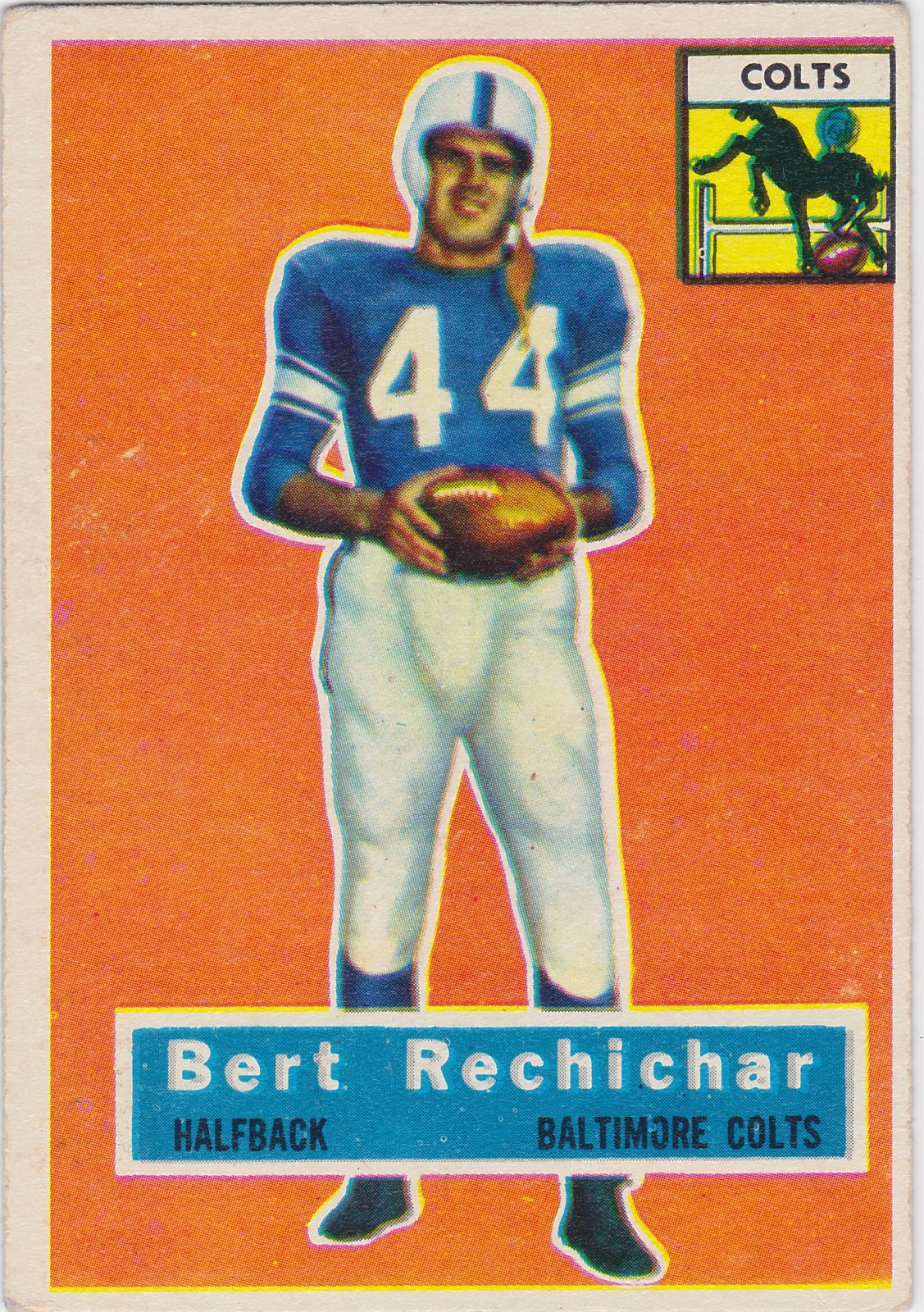 Bert Rechichar shows up in almost every Colts set from the 50s. He played both offense and defense and served as their kicker for many years. As the card states he set the then-NFL record with a 56 yard FG in his first attempt ever. He played a year for the Browns prior to his tenure with the Colts and played baseball in the Indians' farm system. 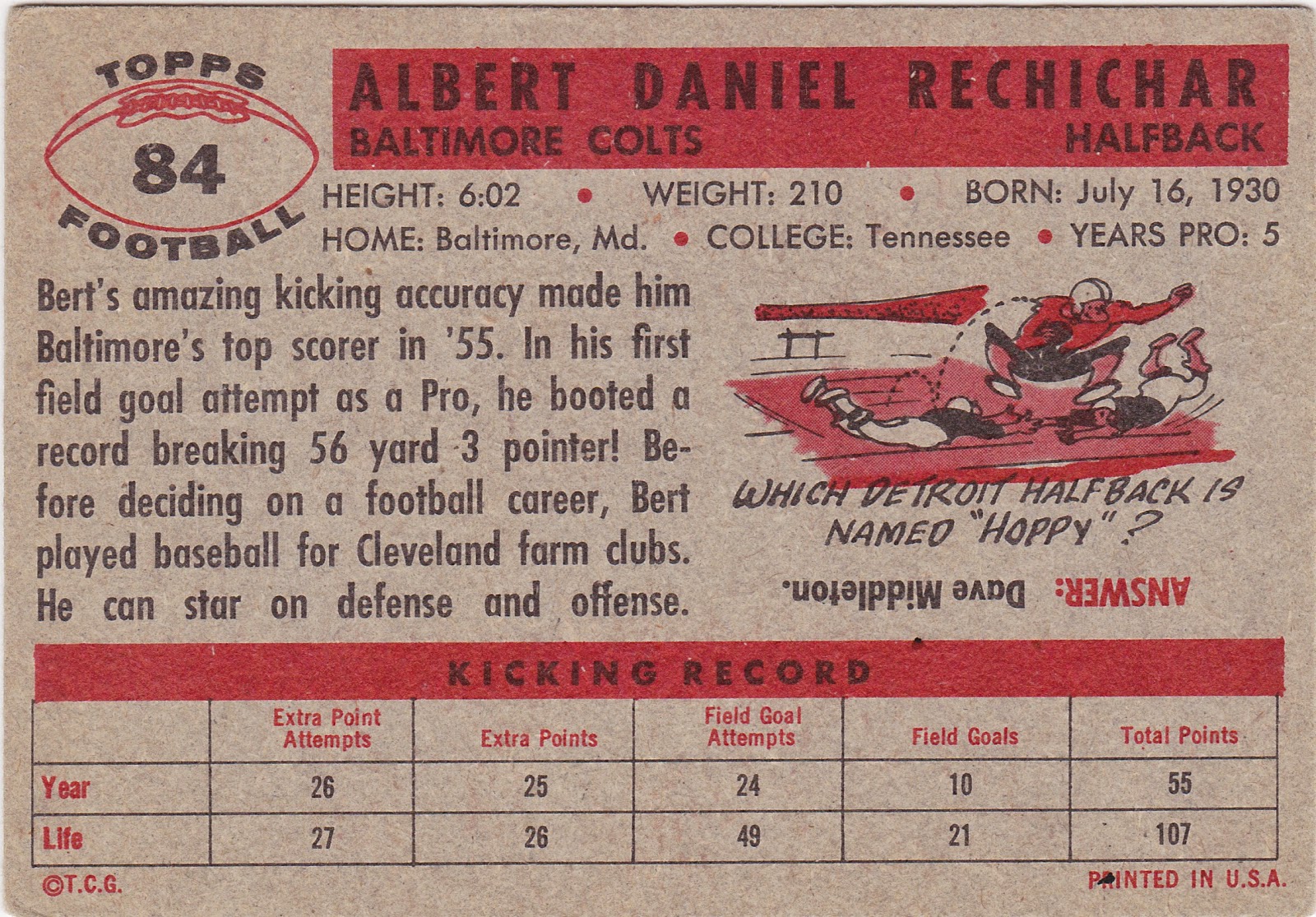 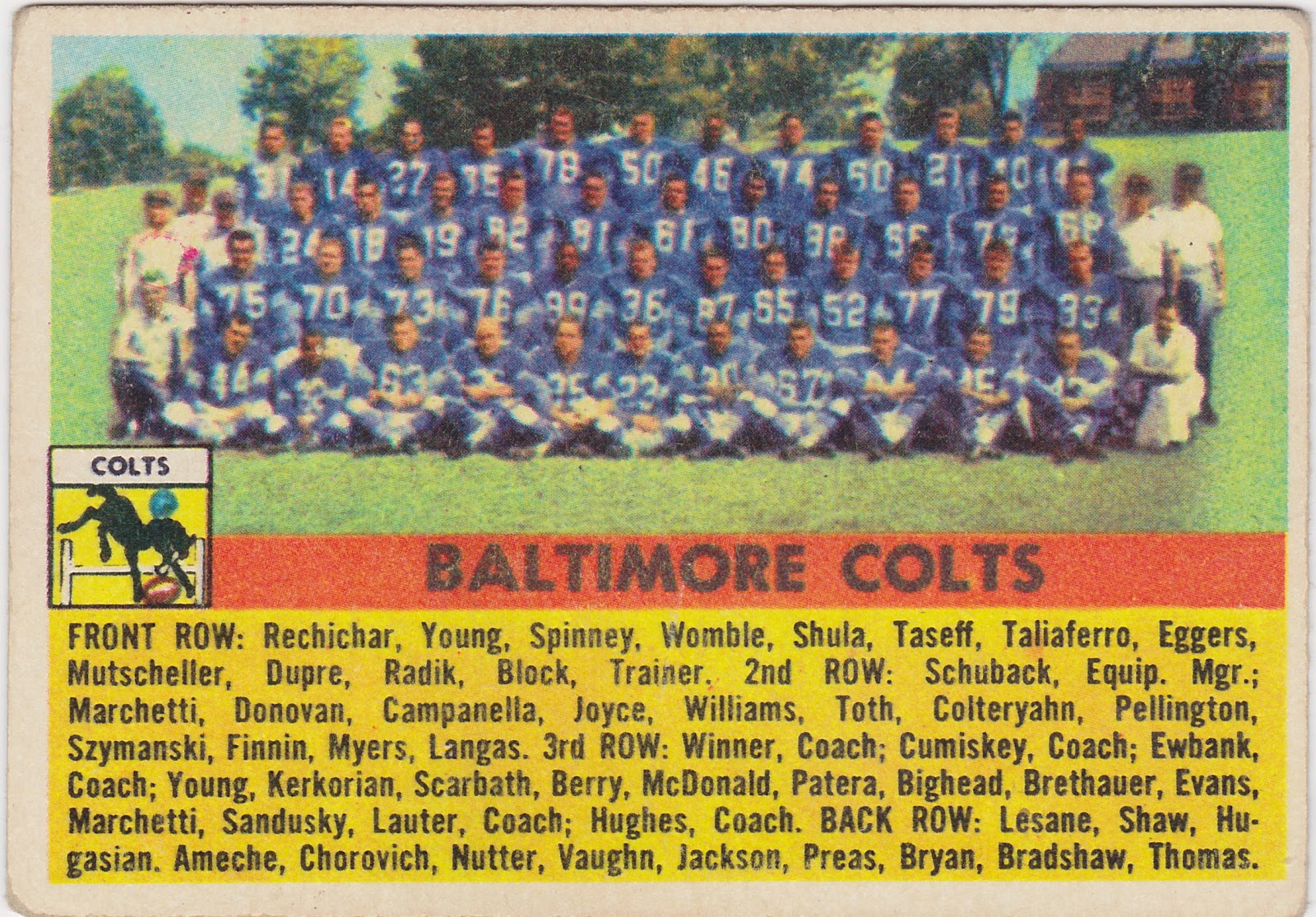 this is how all team cards should look.. I count six NFL Hall of Famers on this one: Ray Berry, Weeb Ewbank, Don Shula, Gino Marchetti and Artie Donovan. Buddy Young, who should be in the Hall of Fame for his on and off the field contributions to the NFL, is also here. 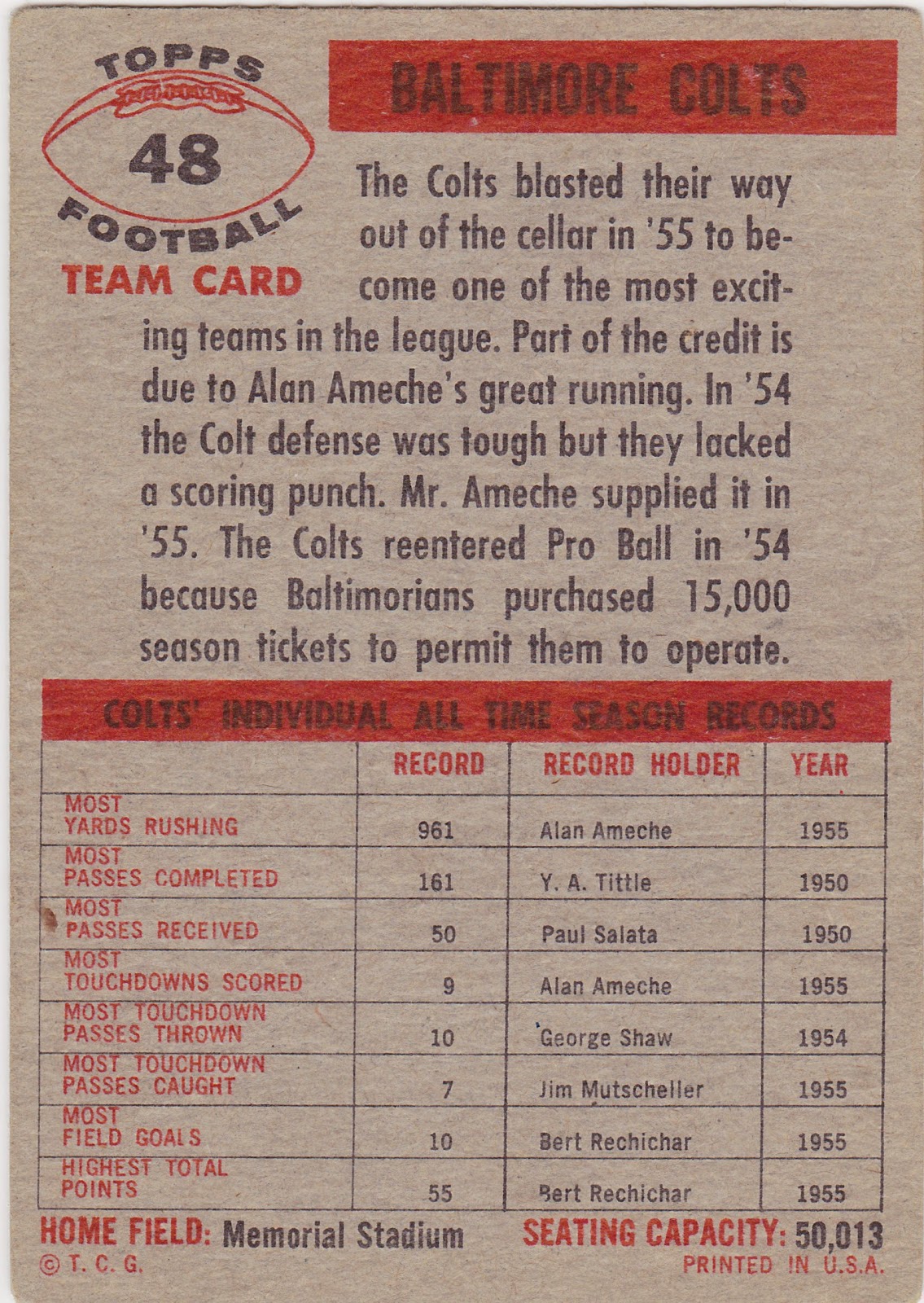 The back of the card is pretty neat as well. Love the blurb about the Colts fans buying the season tickets to assure the teams existence. The item about the Colts 'reentering Pro Ball in '54' is not accurate. The Colts were one of the teams from the AAFL that were absorbed by the NFL for 1950. After one season they folded. They 'reentered' as an 'expansion' team in 1953, not '54. The Colts 1953 club was actually the remnants of the '52 Dallas Texans but that's neither here nor there. The fact is that Baltimore was back in 'Pro Ball' in 1953.
Posted by Commishbob at 5:00 AM