And the other shoe drops today. Here's the '58 Topps National League Squad as selected by Sport Magazine.

Manager Fred Haney appeared yesterday and we don't want him to get a swelled head so we will skip right to the players, and what a crew it is:

That outfield! Robby, Willie and the Hammer. I wouldn't care who you had, if that was my outfield I'd beat you 75% of the time.

And there are three more Hall of Famers on the infield. Add in Warren Spahn and you have 7 of 10 guys who have a plaque in Cooperstown. Really hard to pick a favorite card out of the NL group. I tend to favor the Stan Musial. It's different than any of the others and Musial has that nice guy smile that I always associate him with.

Of the eleven Hall of Famers in the complete subset I missed seeing two in person, Musial and Ted Williams. Musial retired after the '63 season and I'm pretty sure I never saw him play in person. The few Mets' games I saw in the Polo Grounds were against the Giants and Dodgers. Williams played through 1960 and, while I saw the Red Sox at Yankee Stadium in the early 60s, I don't think it was before Williams was gone. 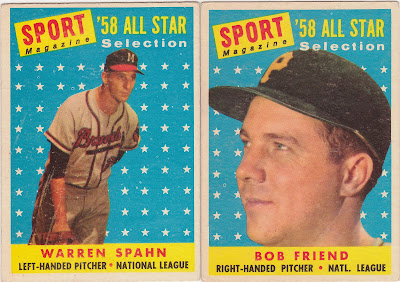 I like the Spahn card almost as much as the Musial. There really is no such thing as a non-cool Spahn card. He's all angles and crooked lines and almost always in the classic Braves uni.

This was a fun subset to chase (after I finally had the Mantle in hand!). The rest were easy to find and not very costly. To my eye they are the best part of the '58 Topps set. Now I am free to chase Baltimore Colt cards for awhile. When I get back to Topps subsets I think I'll look to finish one or two others of the 1960 and 1961 subsets that I like, the '61 MVPs or the '60 rookie sets are possibilities.
Posted by Commishbob at 5:30 AM