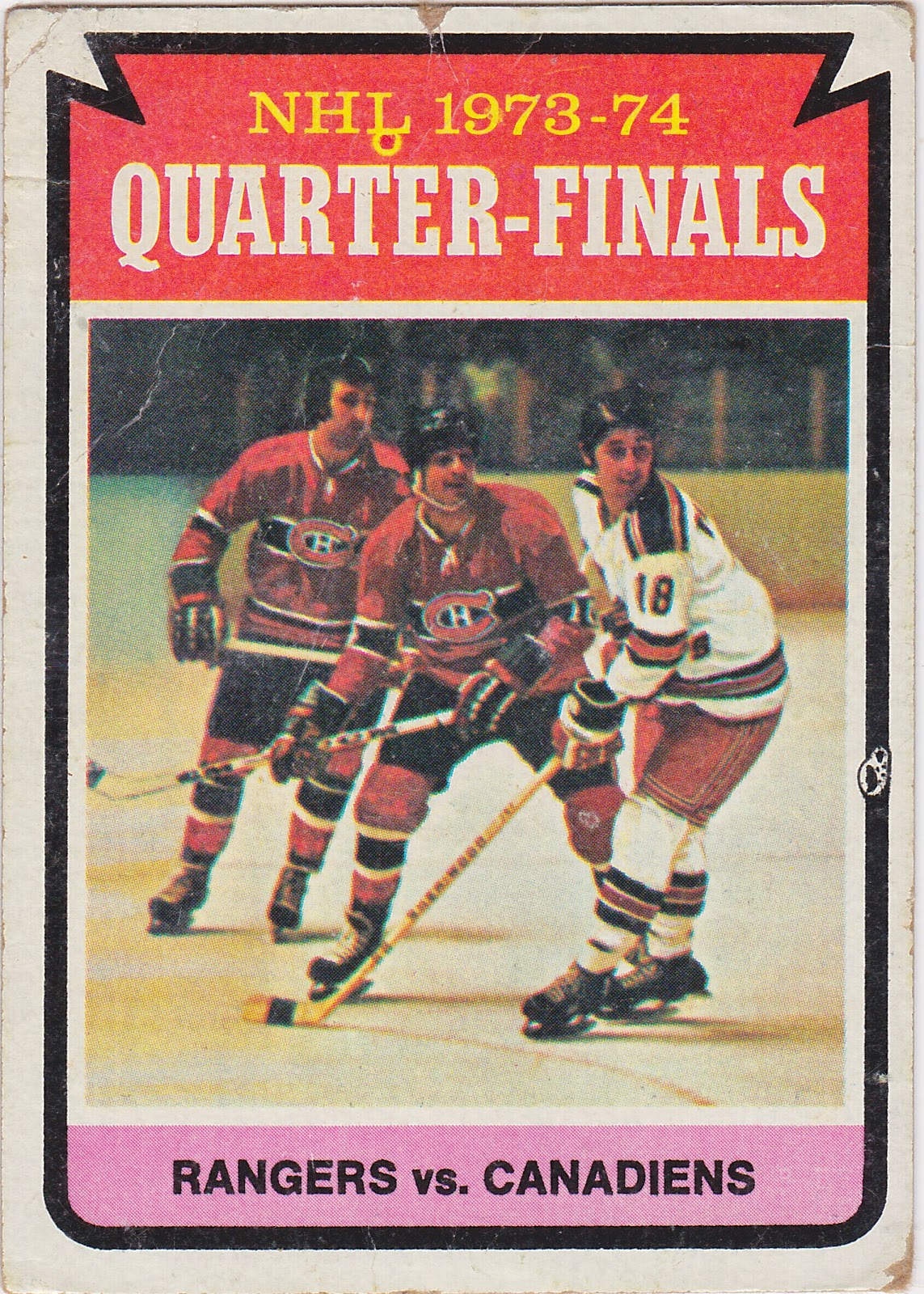 By the time this post is published the Rangers/Flyers 1st Round Series will be history. So I'll be either batshit crazy happy or pissed off enough to stab my cat. No reason I can think of to explain why I've mellowed so much as a fan in every aspect of sports EXCEPT when it comes to the New York Rangers.

Which brings us to this, the final installment of a small series of posts in which I've featured a favorite player from each of the Original Six NHL teams. Like everyone else I choose to ignore the fact that the 'Original Six' are far removed from actually being the first NHL franchises. But I digress.

I think one reason my affinity for my Blueshirts is so strong is that as I grew up they were the only team that everyone close to me 'agreed' on as a rooting interest. In baseball I was an Orioles fan, my Dad was a Yankee fan and my best friend and my closest cousin were devotees of the Giants and Braves respectively. In football I held the Baltimore Colts dear while my father was a football Giants guy and my buddy rooted for the Browns.

But when it came to hockey I don't even think I knew anyone who wasn't a Rangers fan. My family, my friends and their families, everyone at school, my coaches and all my NY/NJ clan of relatives lived and died (mostly died) with the guys on Broadway.

That might explain why as I type this on Tuesday evening I just told my grown son to "turn down the bleepin' TV or close the bleepin' door so I can't hear the bleepin' game cause the score is bleepin' me off". Yes, I'm a grown man who won't listen to a playoff game in which my team is losing 4-0. Yes, I'm that immature stupid.

But here I am attempting to sooth my soul with a posting of Rangers cards. These cards are not of themselves from the Original Six 'era' which ended in 1967, but all the players here are favorites of mine from back in the days of Bruins hatin' rage. Most of them came just the other day from (who else?) Mark Hoyle, a fine Boston lad (ha!) who sprinkles his dupes and vintage gems among all of us in the blogging community. Mark, I salute you!

First up is Eddie Giacomin. Fast Eddie was simply a god to me during his reign as the Rangers' goalie. He was up there with Johnny Unitas, Brooks Robinson and John Mackey in my personal Mt. Rushmore of sports heroes. 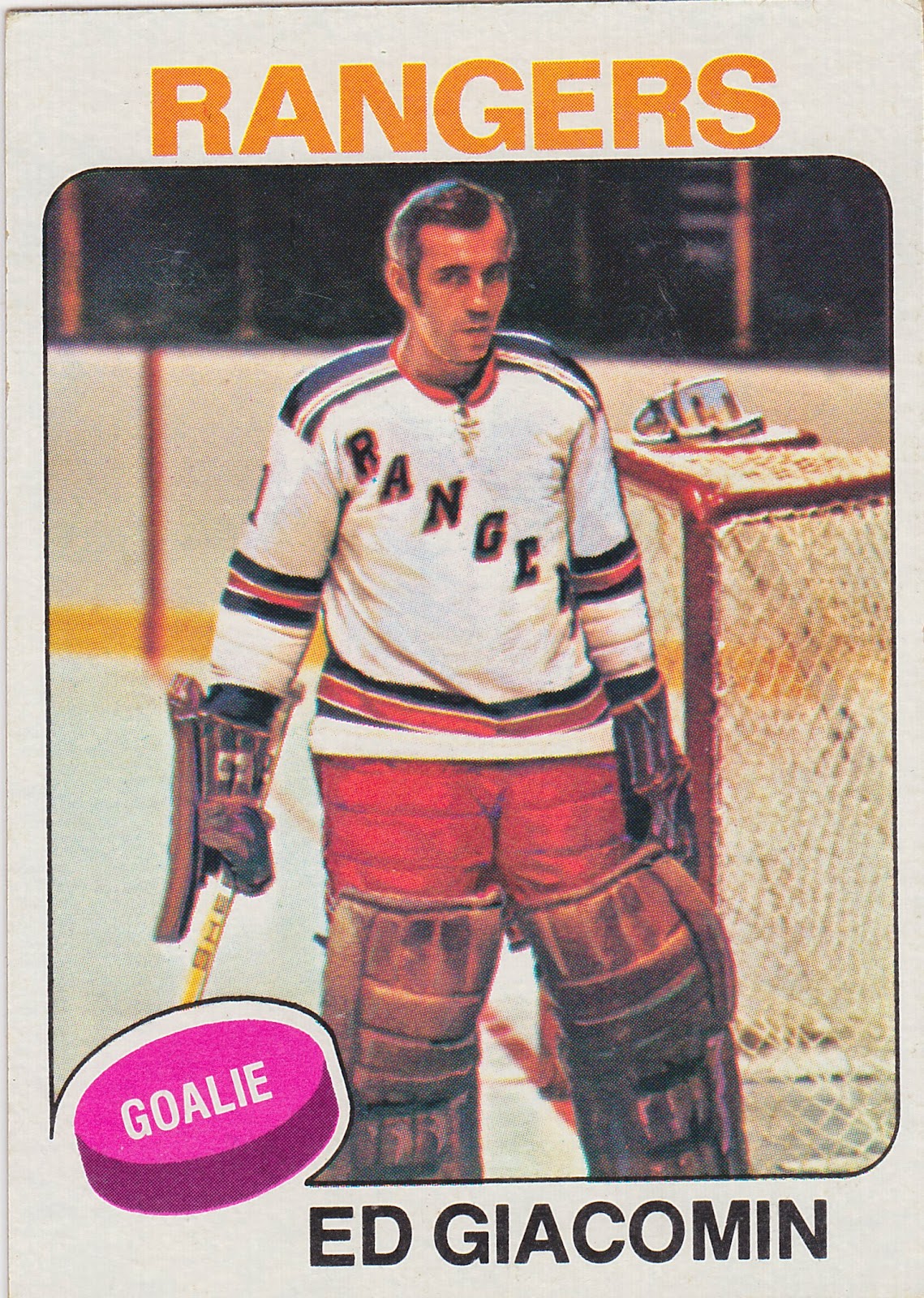 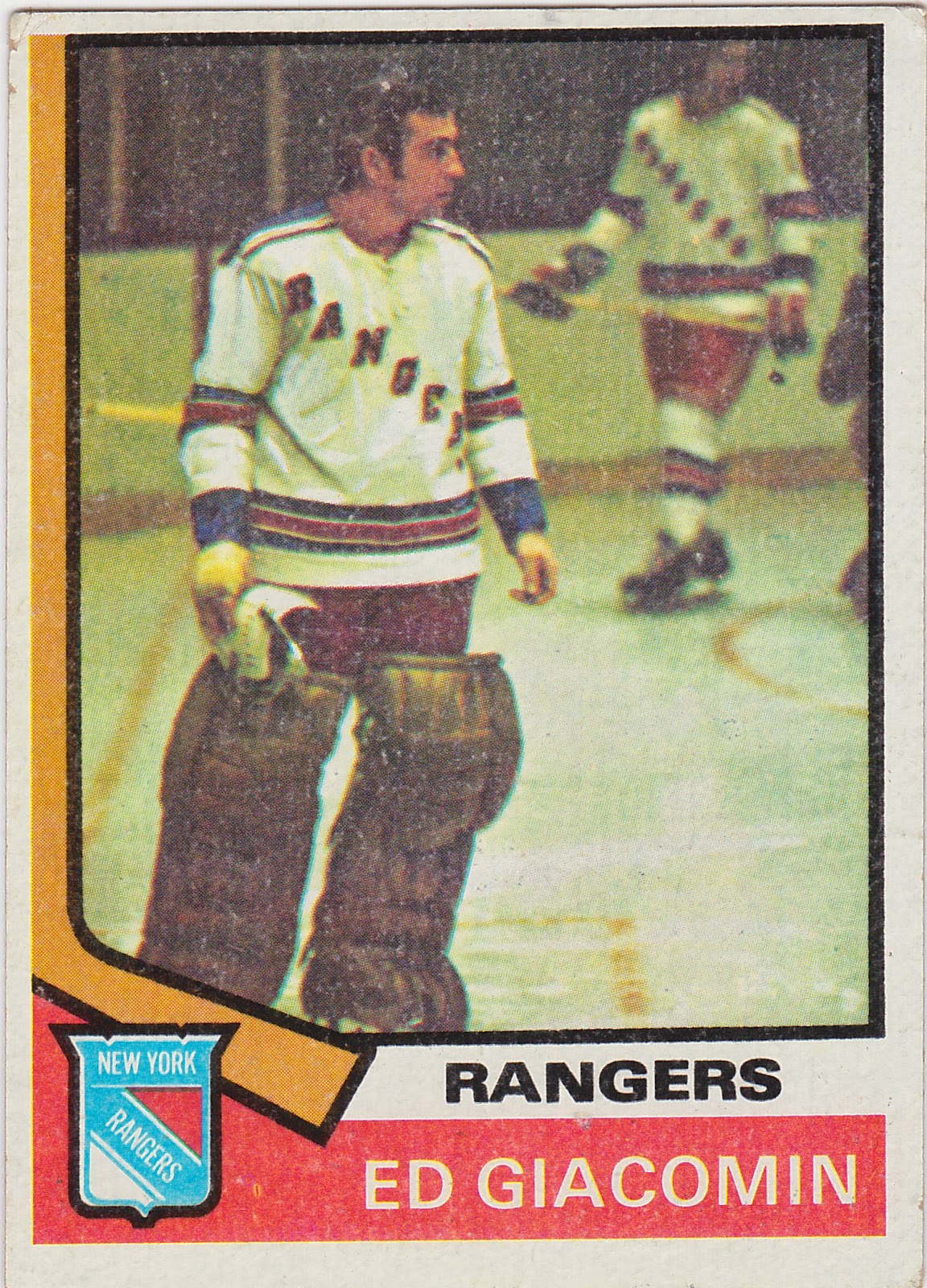 These two cards, from 73/74 and 74/75 represent the end of the 'Giacomin Era'. He was waived in October of 1975 and picked up by the Red Wings. I was working at the old Houston Post and a friend there told me of the deal. I had to read it for myself on the ticker. I'm pretty sure I didn't cry but I likely would have had I not been in the middle of a busy sports department full of tough old veteran writers. Even though I knew his days were numbered with my team I was crushed by the news. Ironically Eddie's very first game as a Red Wing came against the Rangers a coupe of nights later in Madison Square Garden. Ranger fans cheered him like the hero he was and someplace I have a picture of him skating across the Garden ice with his head down as he cried with the emotion of it all. I'd have given anything to have been there! 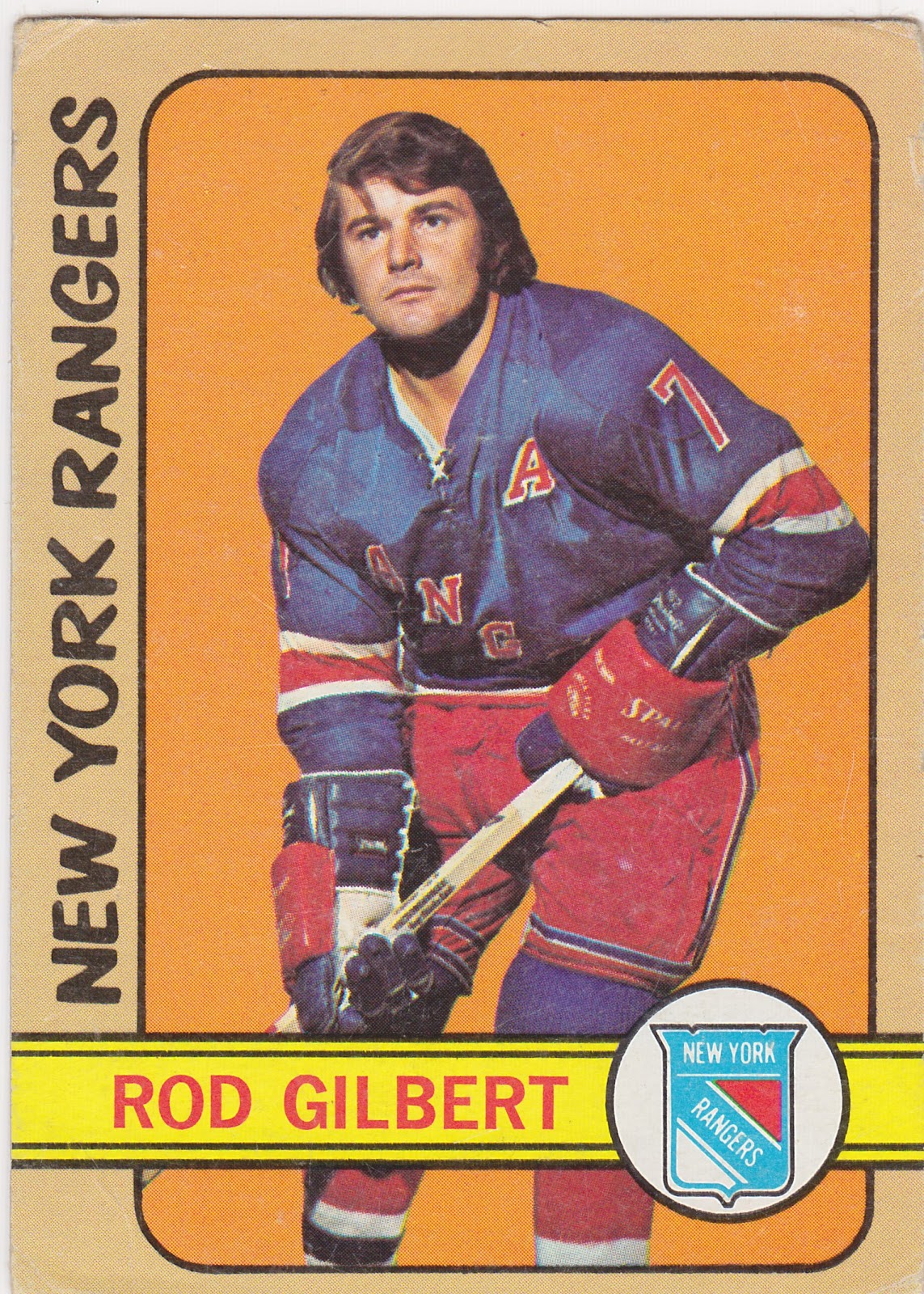 Rod Gilbert was smooth, classy and the Rangers best scorer. I had his poster on my wall (I never could find a Giacomin poster, Eddie was the kind of guy that they made posters of). His number '7' was the number I wanted as a little leaguer. 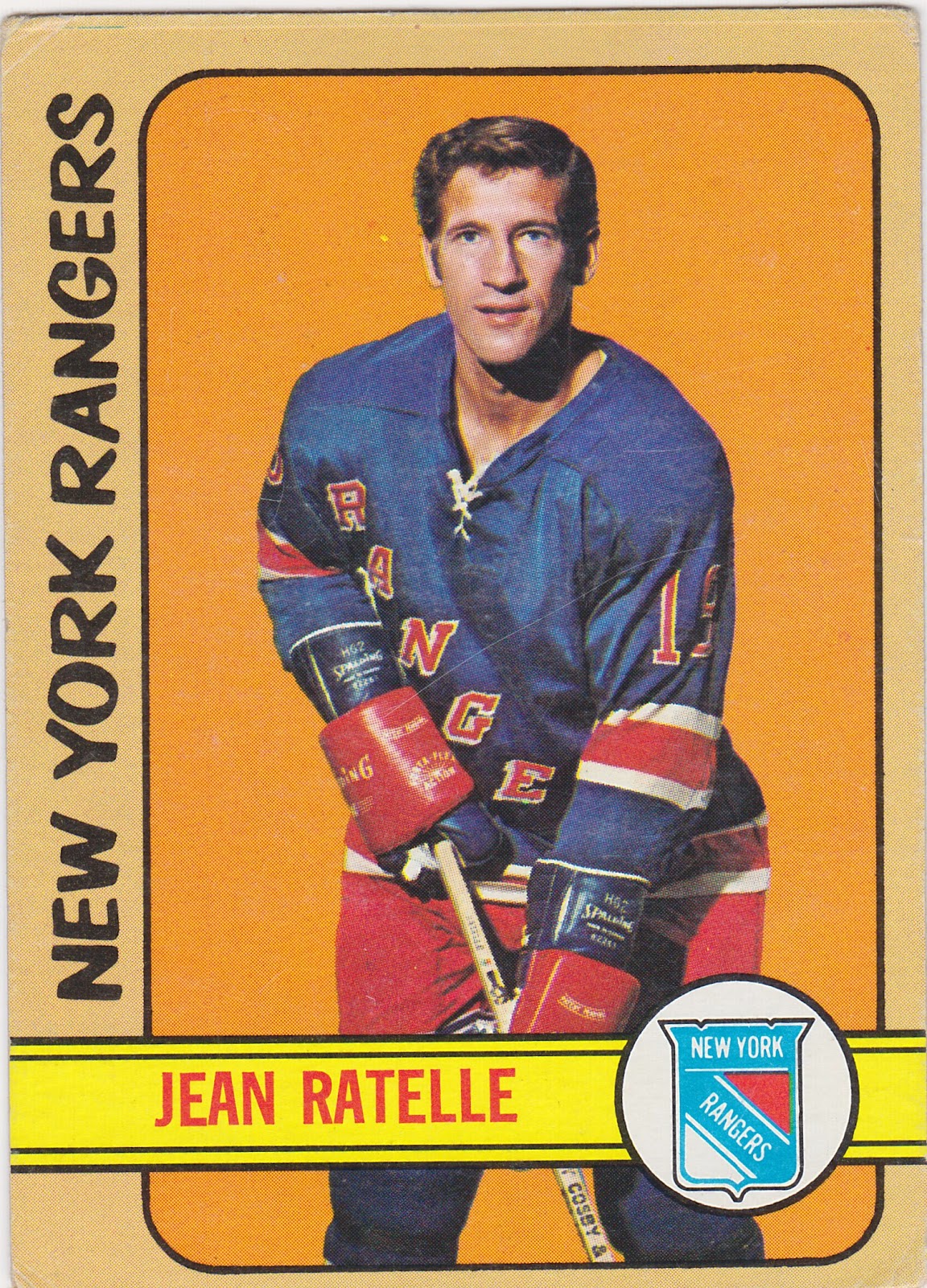 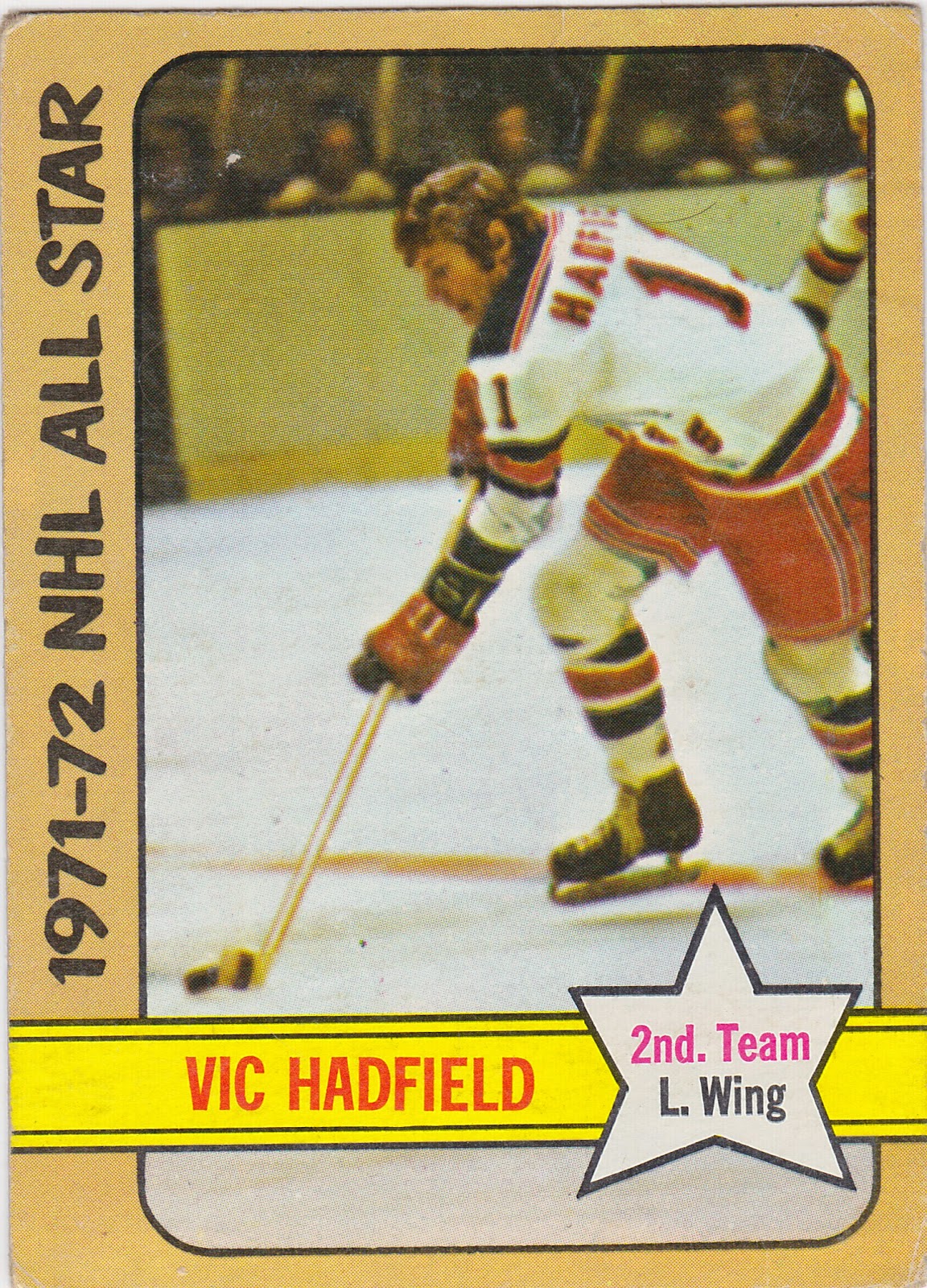 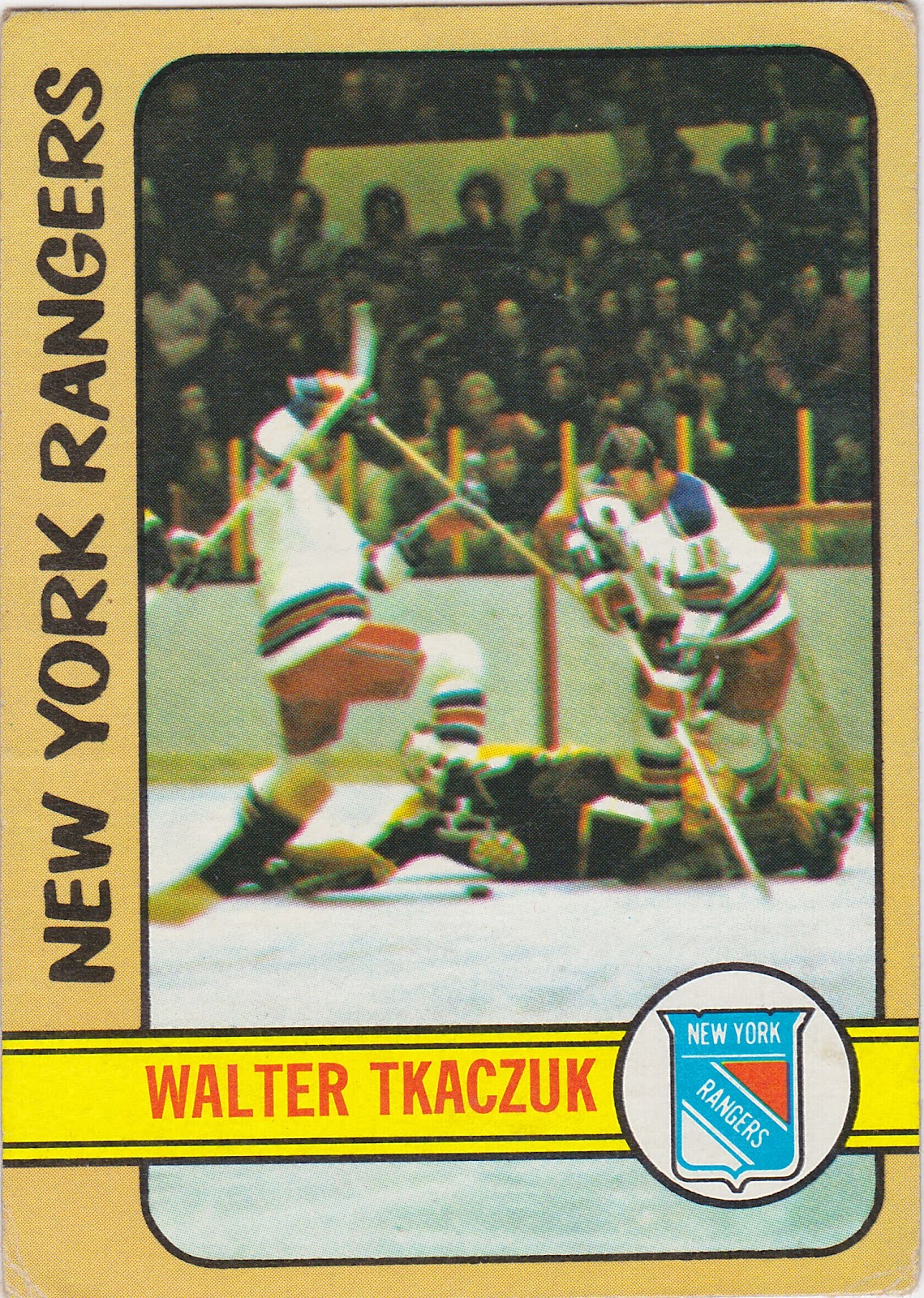 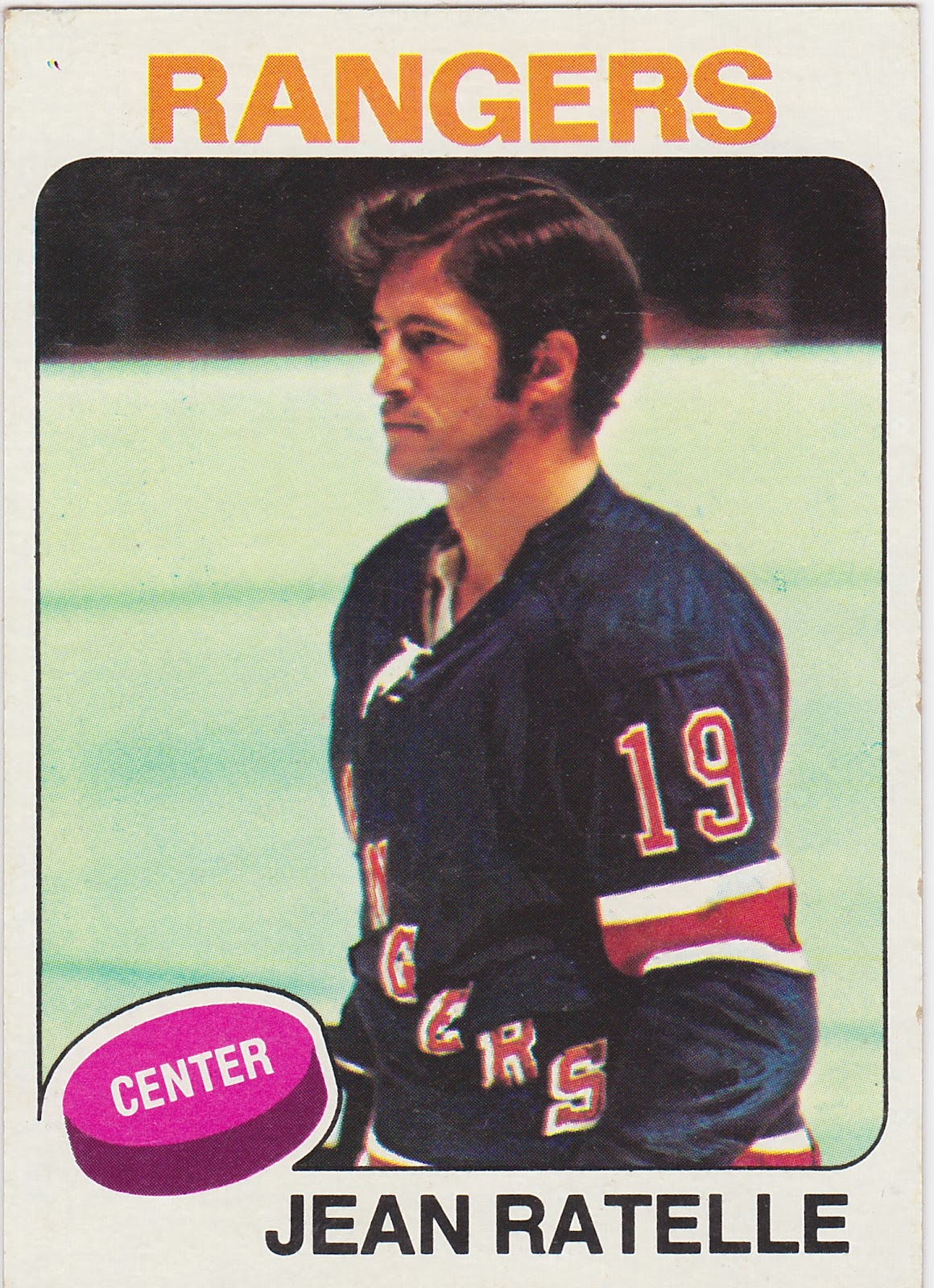 Jean Ratelle, Vic Hatfield (we called him 'Two Sticks'... number 11, get it?) and Walt Tkaczuk were scoring forwards for the Blueshirts. All are among my top Rangers favorites.

And last, but not least: 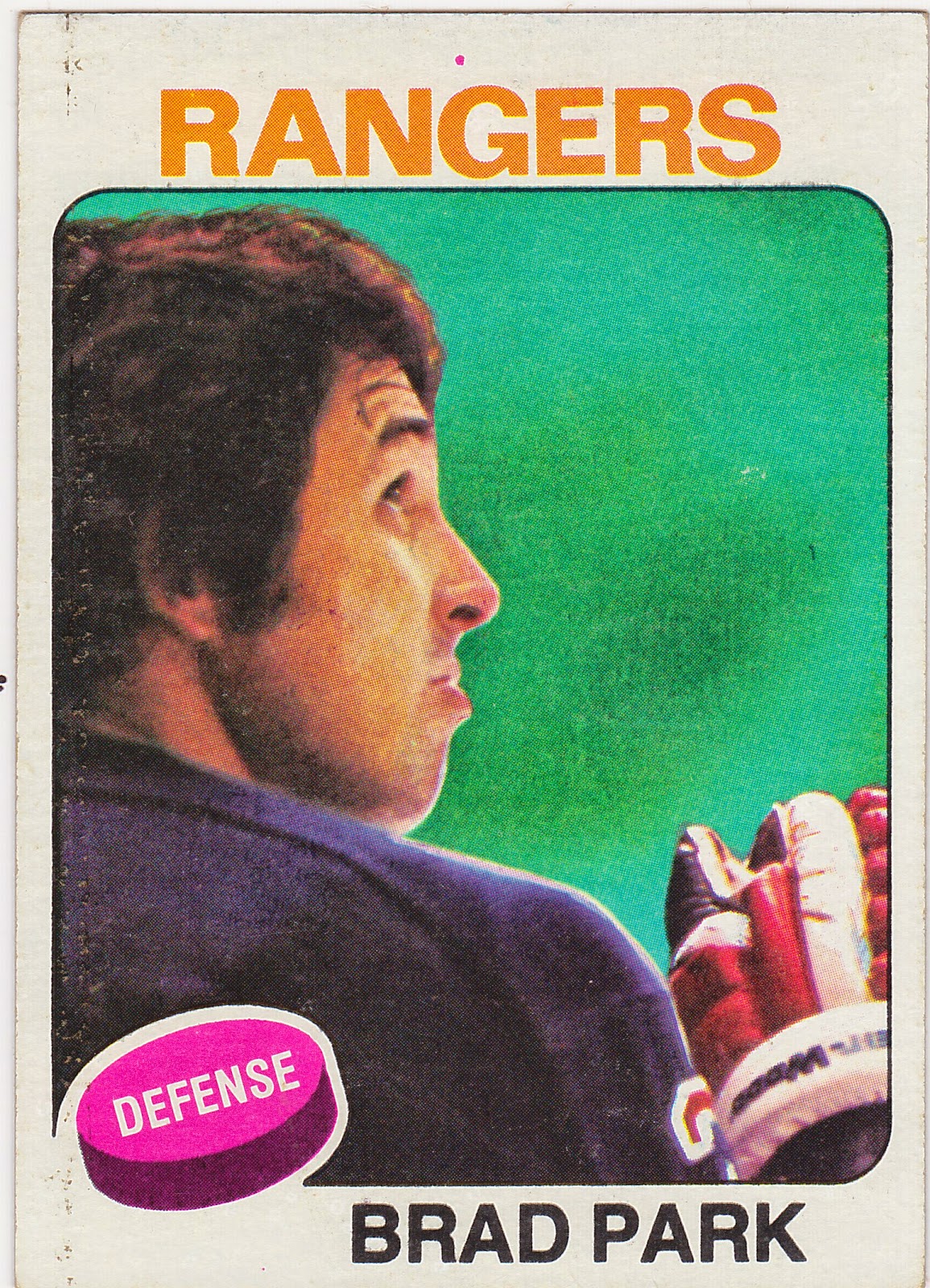 The great Hall of Famer, Brad Park. His debut was much anticipated among Ranger fans after he was 'drafted' in 1966. I saw Park get his first career goal..... the last goal in a 9-0 pasting of the Bruins early in 1969. He had been playing well but I remember that there was a lot of talk about his inability to score that first goal.

Like Eddie Giacomin Park was dealt away by the Rangers but unlike Eddie Park had a lot of hockey left. I always thought his #2 should have been retired by the Rangers. It was later, but only after it was won by the great Brian Leetch. Park had the bad luck to come along as a defenseman during Bobby Orr's career. Even when Orr retired his shadow loomed over everyone else at that position for awhile.

Thanks again, Mark. I love these and the Big E cards you sent.

Posted by Commishbob at 7:09 AM