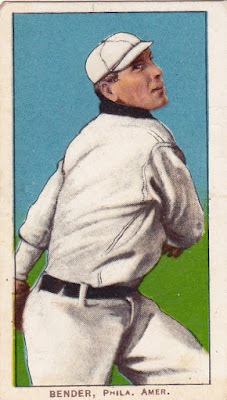 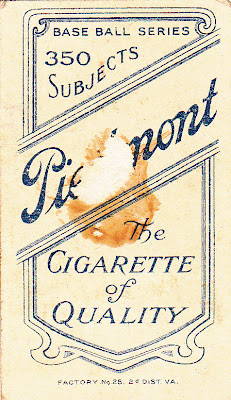 I first posted this card a couple of years ago when I was writing mostly to myself. I love this card so much I thought I would post it again on the day before the 130th anniversary of the birth of Charles Albert “Chief” Bender in Crow Wing County, Minnesota.

"Chief' Bender is undoubtedly one of the most fascinating players to ever don a major league uniform. I read and enjoyed the Bender bio written by Tom Swift. From Bender's Hall of Fame biography:

Played For: Philadelphia A's (1903-14), Baltimore Terrapins (Federal League, 1915), Philadelphia Phillies (1916-17), Chicago White Sox (1925)
Elected to the Hall of Fame by Veterans Committee: 1953
Biography: Possessing a solid fastball, excellent curveball and outstanding control, Chief Bender also developed a slider to help him win 212 games during his 16-year Major League career. He led the American League in winning percentage three seasons, tossed a no-hitter in 1910 and retired from the game with 1,711 strikeouts. Bender also pitched in five World Series, going 6-4 with an ERA of 2.44. A member of the Chippewa tribe and a graduate of the Carlisle Indian School, Bender overcame subtle discrimination and a derisive nickname to become one of the top pitchers of his era.

Here is the only other Bender piece I own. His Perez-Steele H-O-F postcard: 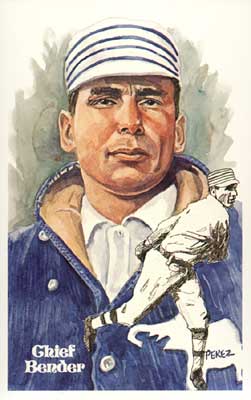