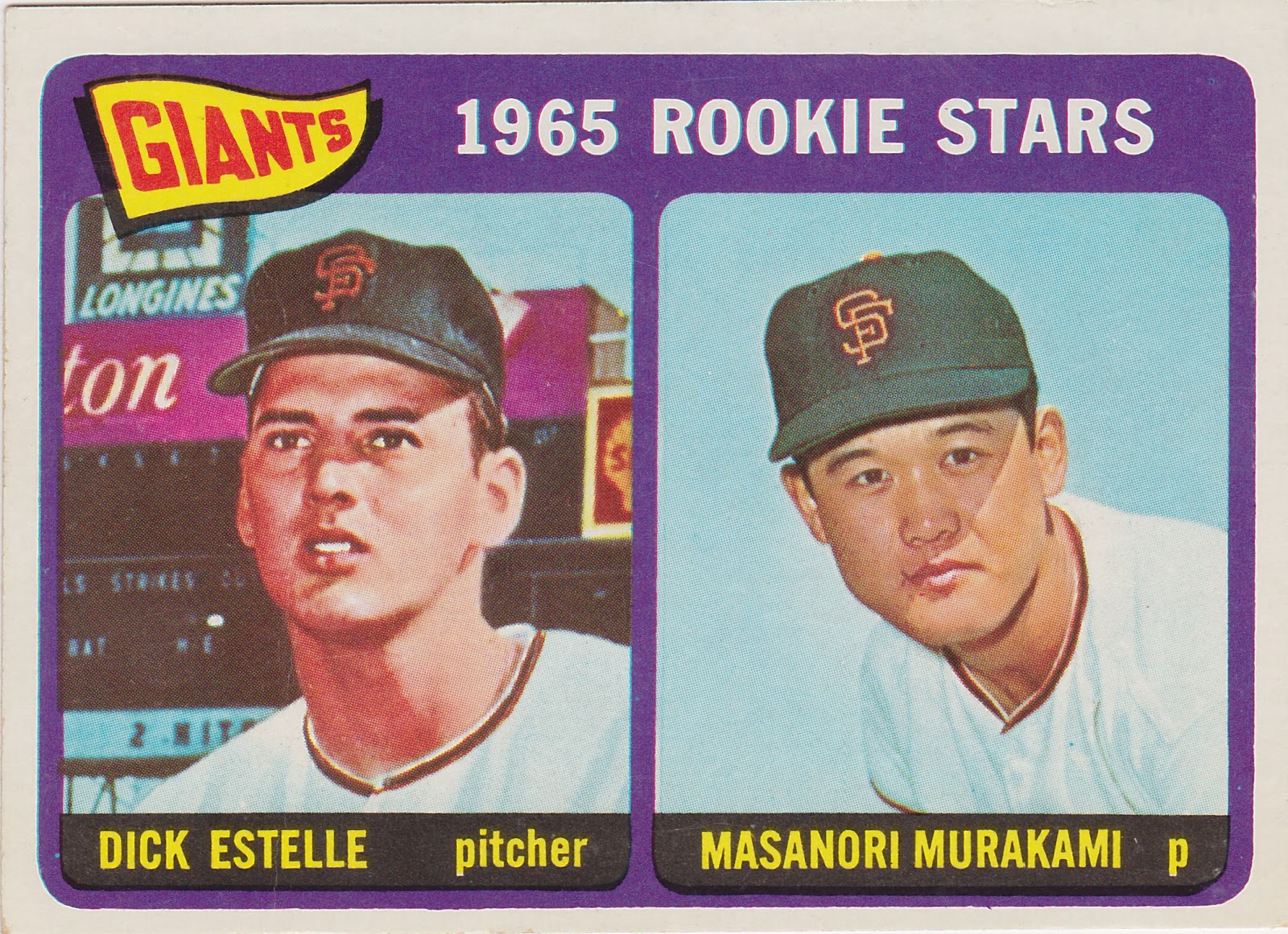 A week or two ago Fuji had a post on his blog that featured some recent card show pick-ups, one of which was a Masanori Murakami statue. That post shook loose a memory for me and prompted me to dig out a card I've been wanting to post about but never had the initiative to go find in my boxes of 'stuff'.

Growing up my best friend Chris was a diehard Giants fan and by extension I knew a lot about the team. I wouldn't call myself a Giants fan exactly but it's like living in Houston now... I pick up a lot of Astros info just by being around my family who watch them pretty closely. We'd go to lots of Giants-Mets games at Shea so I more or less 'followed' the club. I even had two favorites, Jim Ray Hart and Juan Marichal.

Murakami's debut as the first Japanese player in the majors caused quite a stir in September of 1964. We developed a real fascination with the guy. I had this card when the '65 set was new but like most of my cards it disappeared along the way. So a few years ago I grabbed another one.

I never gave much thought to Dick Estelle who shared this card with Murakami. Both pitchers were September call-ups in 1964. Murakami debuted on September 1st, Estelle first pitched three days later in Philadelphia on the same Giants' road trip. Murakami pitched one inning against the Mets and allowed a single while fanning two while Estelle's first game was a start and he went six innings against the Phils giving up a run on four hits. He walked five which may have been a case of nerves. Estelle was a New Jersey native from down the Shore so it's possible (probable) he had family on hand for his first game.

Estelle finished out '64 with five more starts and had an ERA of 3.02 and a 1-2 record. He actually was rolling along nicely but was beaten up by the Cubs in his final appearance of the year. He didn't make the Giants' staff in '65 but again was called up in September. This time he worked a few times as a middle reliever, again pitching well and got got a start on the last day of the season. Like the previous year his last weekend on the season work was underwhelming and he was beaten soundly by the Reds.

Estelle, who had been 23 with five seasons of minor league ball behind him when he debuted, never pitched in the majors again. He spent seven more seasons in the minors before retiring.

Like Estelle, Murakami pitched again in 1965 for San Francisco but he had made the club in the spring and was up for the whole season. In 45 games he pitched nearly 75 innings and had a 4-1 record with eight saves. He made one start along the way and the result showed the Giants that they were right in using him as a reliever. He returned to Japan in 1966 and pitched through the early 1980s.

There is much more to Murakami's background including the fascinating story of how he came to pitch in the States, why he returned to Japan and the politics of it all. His story is an interesting one and his BR Bullpen page is a good place to read about him. 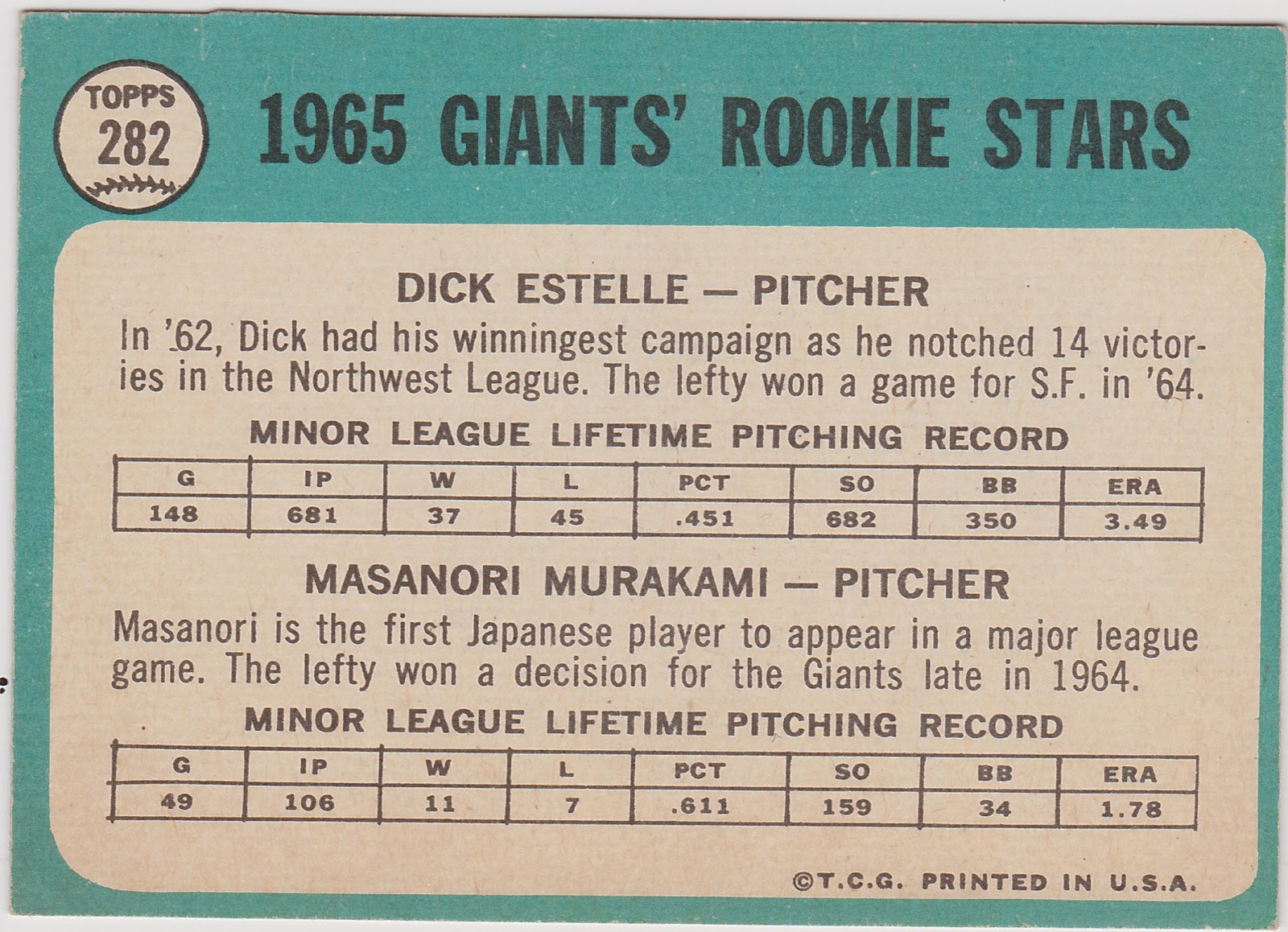