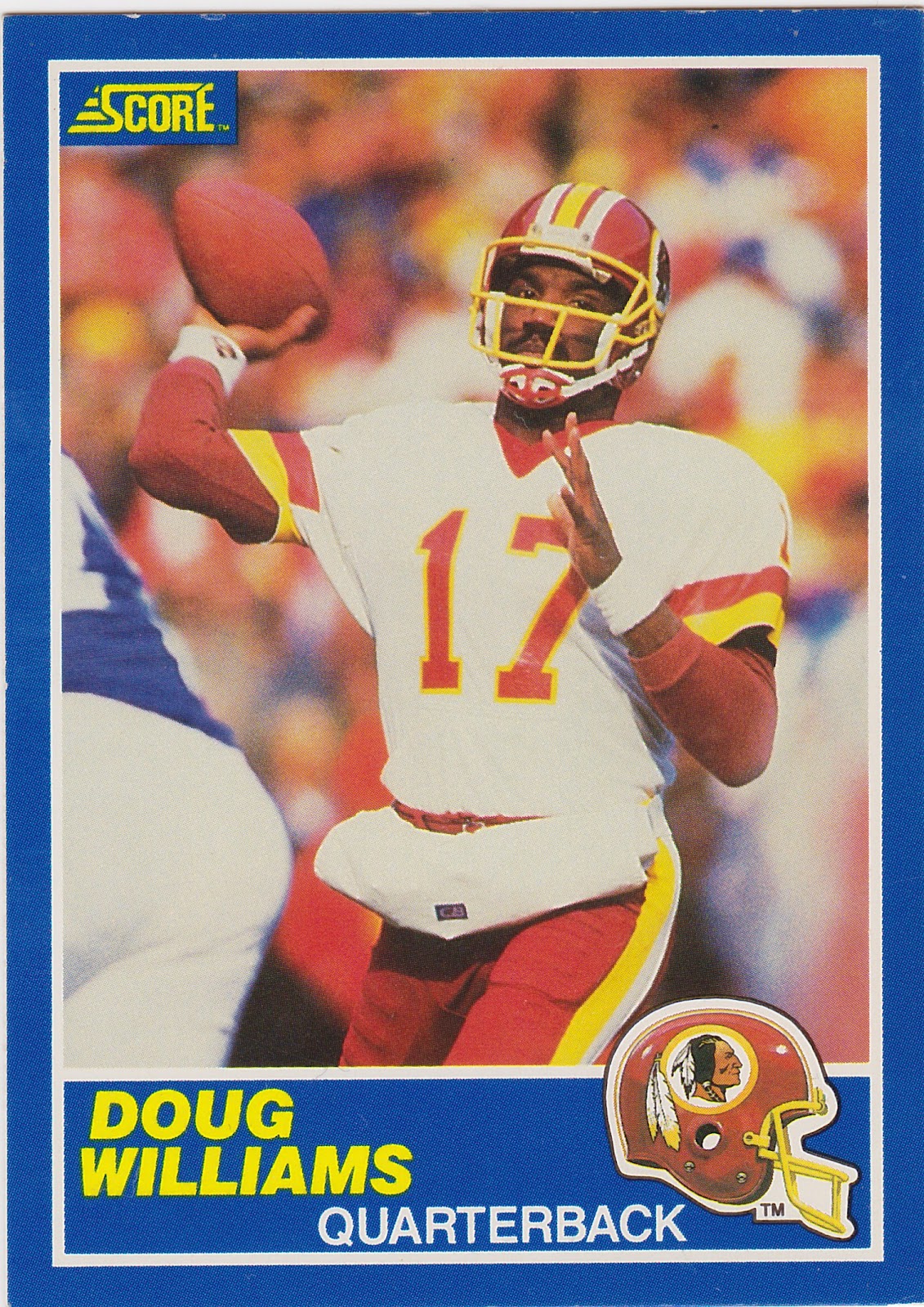 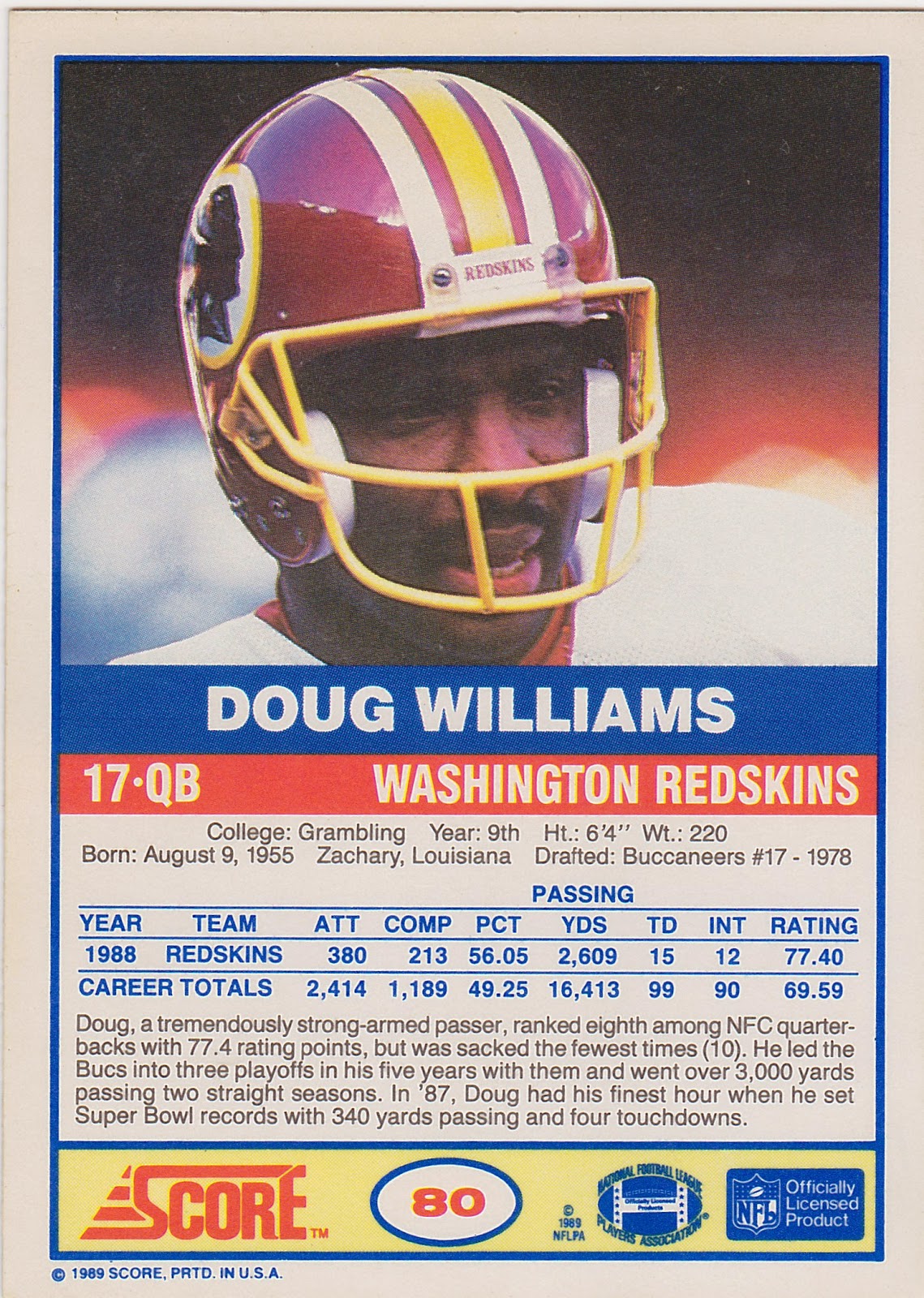 NFL Info: Doug Williams only played one season at Grambling State University but he finished 4th in the Heisman voting and was drafted by the Tampa Bay Bucs in the first round of the 1978 draft with the 17th pick. In four seasons with the Bucs he led them to three playoff appearances and one NFC title game. The Bucs had never been to the playoffs before Williams arrived. With him they went to the playoffs three times in four years and the 1979 NFC Championship Game. Williams was the lowest paid starting QB in the league (and was paid less that nearly half the NFL's back-ups) and when he was refused a raise he jumped to the USFL for two seasons before returning to the NFL with Washington.

He was signed by Washington coach Joe Gibbs who had been the Bucs offensive coordinator during Williams' time there. He spent 1986 on the bench but stepped in for Doug Schroeder in 1987 and was chosen to start as the Redskins made the playoffs. He took the team to the Super Bowl and threw for 340 yards and four touchdowns against the Broncos in an MVP effort. He was the first black QB to play in a Super Bowl. Injuries hampered him the next two seasons and he was out of the NFL as an active player after that.

Since the he has been involved in the game as a coach at the high school level in Louisianna, as a college head coach at Morehouse State and Grambling and in various capacities in the NFL. This spring he was hired as a personnel executive under general manager Bruce Allen in Washington.

Fantasy Impact: I had Williams on my bench during the 1982 season which a player lockout/strike shortened to eight fantasy weeks. Tommy Kramer started all of my games including the championship game which I lost.

I had him again in 1988 coming off his big season in Washington. He opened the season as my starter but, just as in the NFL, his season produced mixed results. In six starts he had three two touchdown games but in his other three he didn't throw one. I went back to him in the semifinals and he got a score but I lost anyway.

The Card: 1989 Score football is an awesome set. One of my favorite 'modern' football sets. I bought quite a few packs of this one when it was released but a lot of places that carried cards by the pack didn't have it. Pro Set was more available (at least where I looked) and I put that set together. I continued to buy Score football (I have the complete '90 and '91 sets) but my days of buying a lot of hobby packs ended about 1992.

This Score Williams is pretty typical of the set. The blue border is my favorite of the three colors used. Score was never shy about bright and loud designs back then. The pictures were just a bit below the quality of the Pro Set cards but still pretty nice. The Score logo stays out of the way and of course I appreciate the team helmet being used. Different pic on the back and more color, lots more color!

If I have a gripe it's that the picture on the reverse leaves little room for stats and the write-up which is printed in the smallest possible type size. 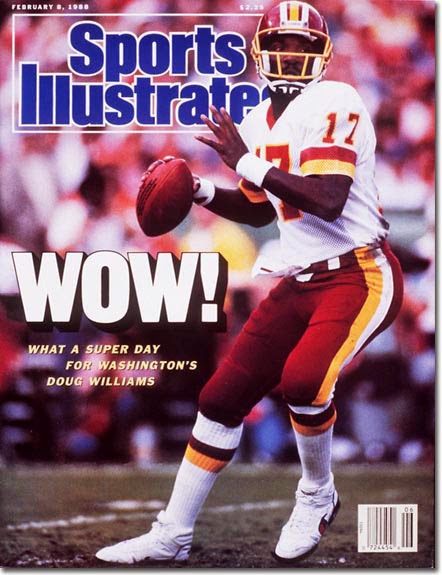