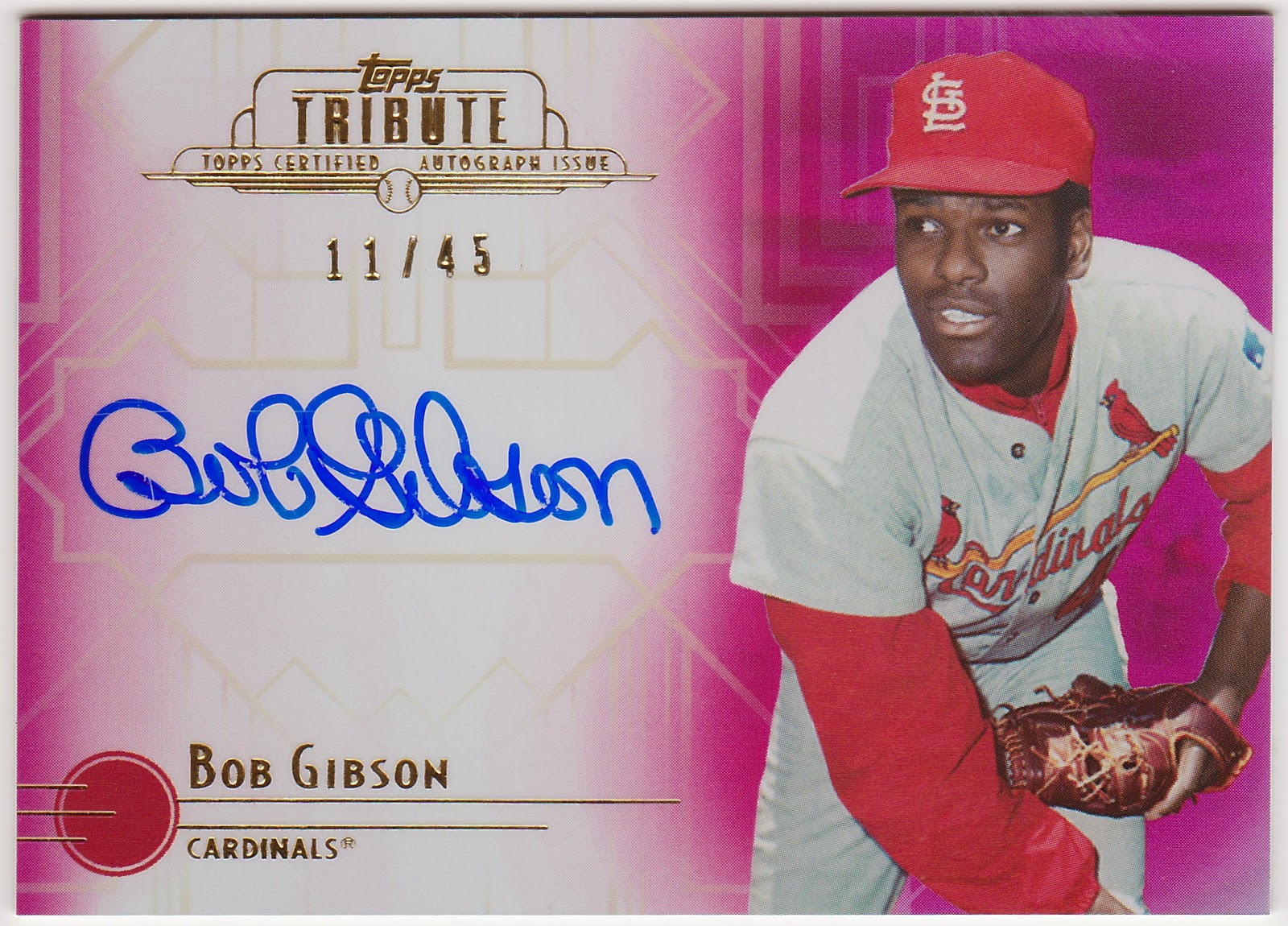 If you've read more than one of my posts you know how unlikely I am to buy a high end card from a current set. Not that I don't like them, I do. Some of them are awesome and truth be told shiny, chromey cards can be pretty cool. But I really don't keep track of all these sets and don't know one from another.

And I can't remember what I was looking for when I came across this Bob Gibson Topps Tribute card. I found a bunch of these Gibby Tribute cards from 2013 and 2014 actually and sorted them out by cost and went for the cheapest one.

I've told my story of seeing Gibson pitch in relief in the Astrodome in the last month or so of his career over on my other blog when I posted his '59 rookie card, but I guess now's as good a time as any to repeat it:


I was fortunate enough to see Gibson pitch and believe me, he was a real badass on the mound. My favorite memory comes, ironically, from 1975, his last season and the final time I saw him perform. I attended this game in mid-August with a friend of mine who happens to be a lifelong Cardinal fan. As Gibby's career came to an end he struggled through a year that saw him saddled with a 3-10 record and an ERA over five. But on this day Gibson came into the game after the Cards had taken a one run lead in the top of the eleventh. I distinctly recall watching from seats behind the Cardinal dugout as he stalked out to the mound with that look that few pitchers had. My friend and I both saw it and said to one another 'Game over." And it was. Gibby blew away three Astros (looking!!) to wrap up the game. Awesome.

Funny thing, I was just talking about that game the other night with a different college friend while we sat in just about the same location behind the visitors dugout at Minute Maid Park. Gibson's name came up because the Astros starter seemed to be killing more time on the mound that a soccer player lying on the pitch with a one goal lead. And in turn the Mariners hitters were asking for time, adjusting batting gloves and making the game last forever. 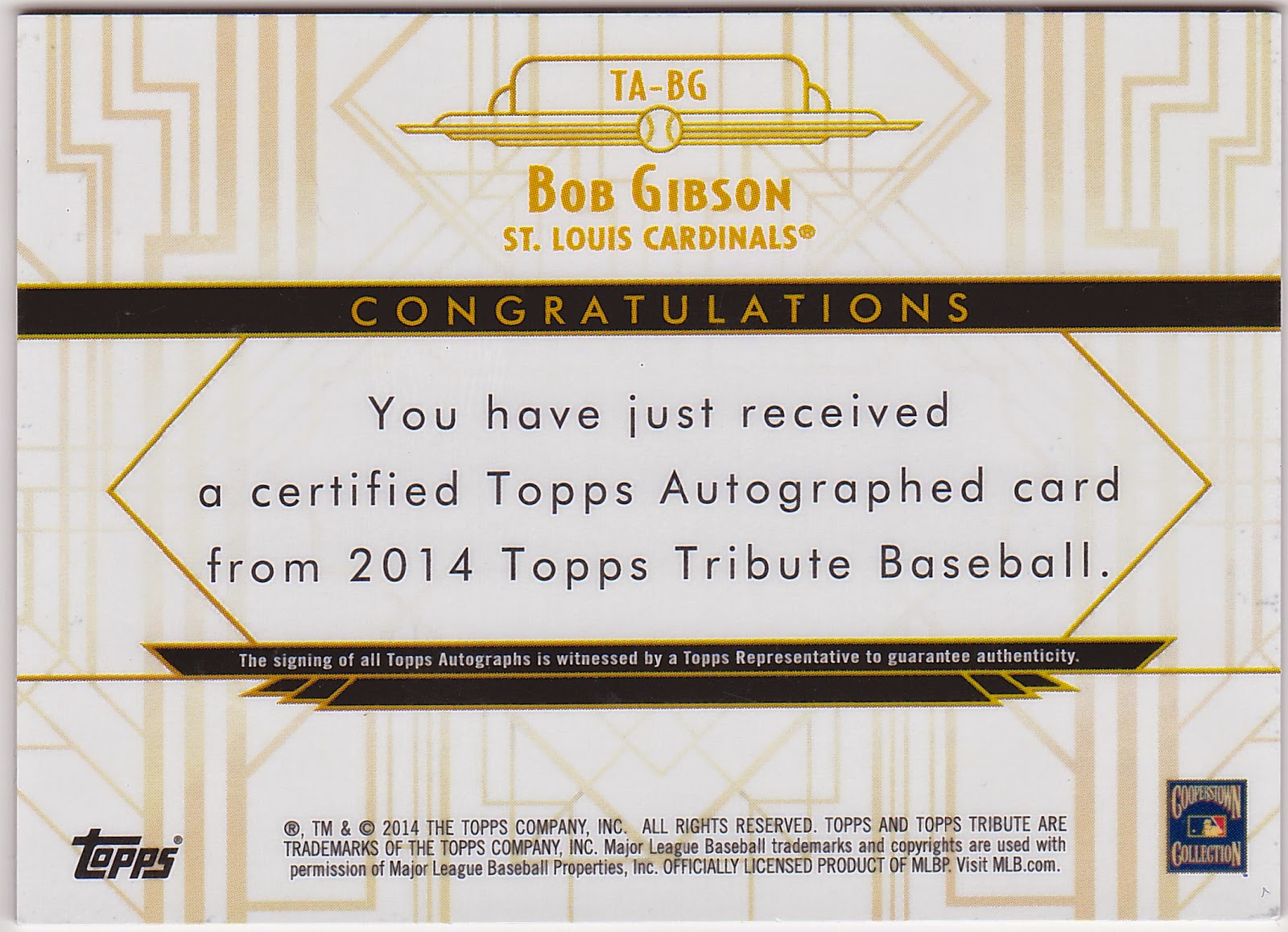 I have a small but growing Gibson collection. Since I already have his '59 I may just finish out the run of his career era cards. So all in all I'm happy to have spent my $ on this one. It's more than I normally spend on a card but I'm glad to have it. 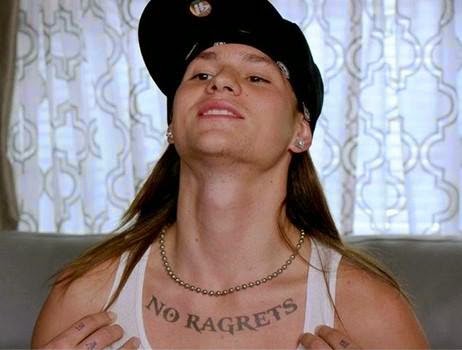