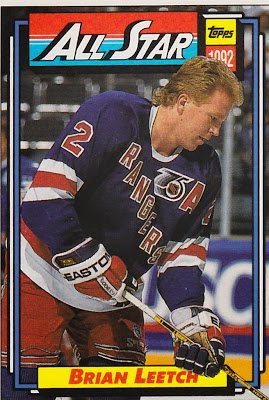 Picking this card out of a $4 hanger hockey re-pack got me to thinking. I knew Ranger legend Brian Leetch had been born down the coast from here in Corpus Christi, Texas. I figured the odds of another NHL player being native to the Lone Star State was pretty remote. I figured I had a collection of one.

But I was wrong. A quick check turned up this info on Hockey-Reference.com. Four other NHL guys are Texas natives so I decided that if I could find a cheap card of each of them I grab it and finish off a mini collection.

I found three of them from a dealer for 99 cents each with free shipping, the fourth came out of Canada so it cost a few dollars but for about $7/$8 I had the whole little group. 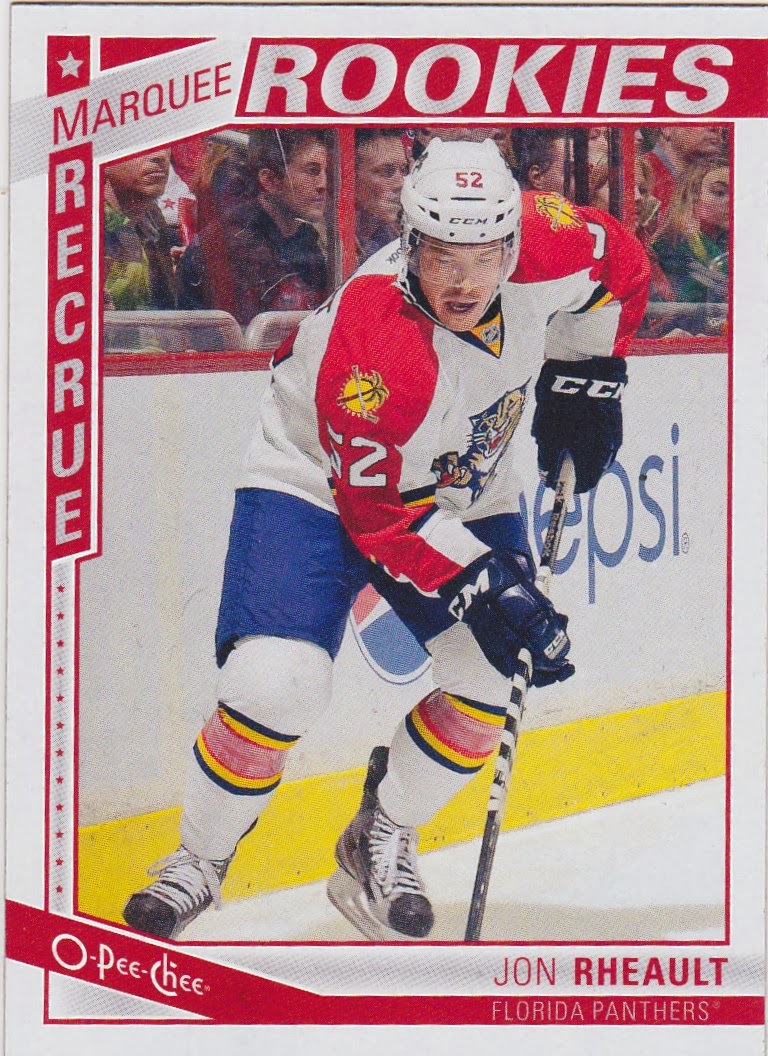 Jon Rheault is one of the three 'Hockey Sons of Texas' that is currently active (or has been recently). He played five games and took five shots in March of last year for the Florida Panthers. He played at Providence College and spent six seasons in Junior and minor league hockey before his call up last season. He signed to play in Germany this year and he is tweeting from over there. He was born in Arlington but grew up in New Hampshire. He mainly played last season in San Antonio(!) for the AHL Rampage.

Chris Brown is currently a member of the Phoenix Coyotes. He played in a handful of games with them last season and has been active for a few this year while mostly playing for Portland of the AHL. He played for the US National Development Team and then for the University of Michigan. He was born in Flower Mound. 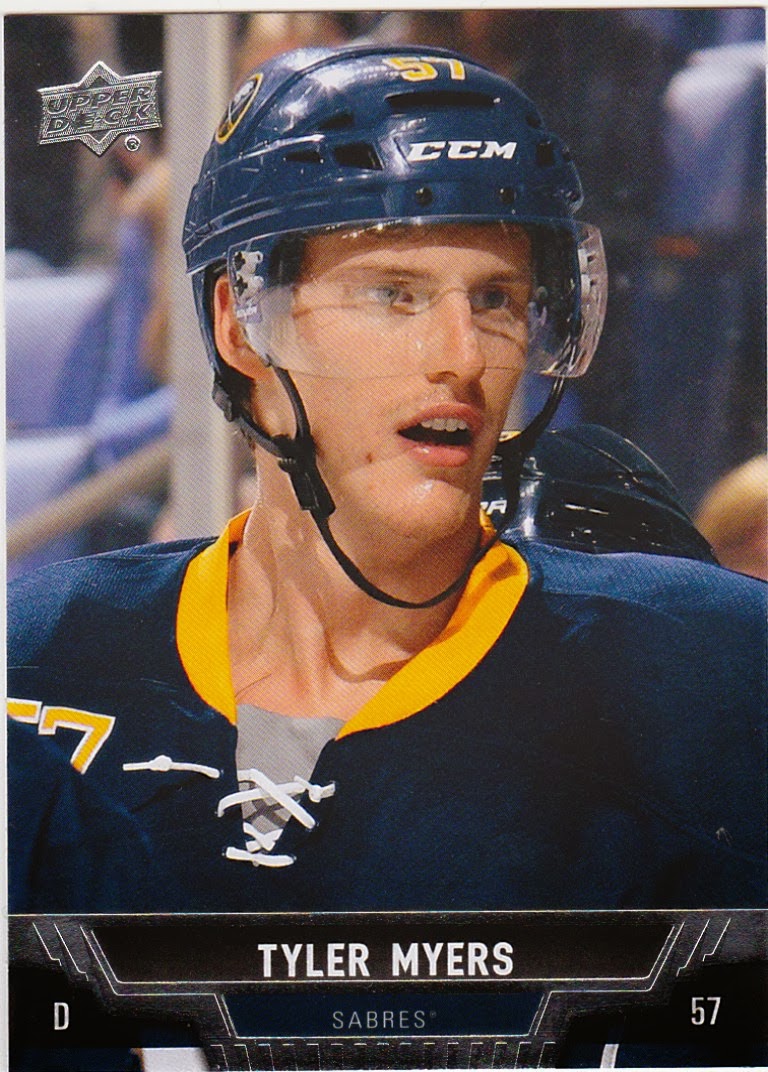 Tyler Myers is a defenseman for the Buffalo Sabres. This is his fifth season for the Sabres and he has 38 career goals and over 90 assists. He has a pair of career playoff goals and had five assists in the 2011 playoffs. He was born right here in Houston. I need to check into that story.

Defenseman Mike Christie was born in Big Spring which is a good long ride from civilization in west central Texas. I guess a player from out that way makes more sense than one from Houston. It gets pretty cold in that part of the state. But actually there is a story here. From Wikipedia:

He was the first native of Texas to play in the NHL although it was strictly a technicality as his father was a Canadian citizen working for an American oil company and he grew up in Canada.


He played for Denver University and broke into pro hockey with the Dallas Black Hawks in 1971. His NHL debut was with the California Golden Seals in 1974/75. This is his second year card. His rookie card for the previous season's OPC set uses the same photo.

Christie was raised in Alberta but he played for the US in the first Canada Cup competition in 1976. He played for seven seasons in the NFL, six of them as a regular. He didn't score much, just 15 goals, but he had over 100 assists. After two years in California he went with the as they moved east and he played for the Cleveland Barons (how many of you even knew Cleveland had an NHL team), the Colorado Rockies (now the NJ Devils) and briefly for the Vancouver Canucks as his career ended in 1981.

I thought it was pretty neat that I was able to add another Golden Seals card to my collection. Christie's OPC card is the only one with an interesting reverse so I'll post it. The bronze color makes the text hard to read, but it sure is unique. 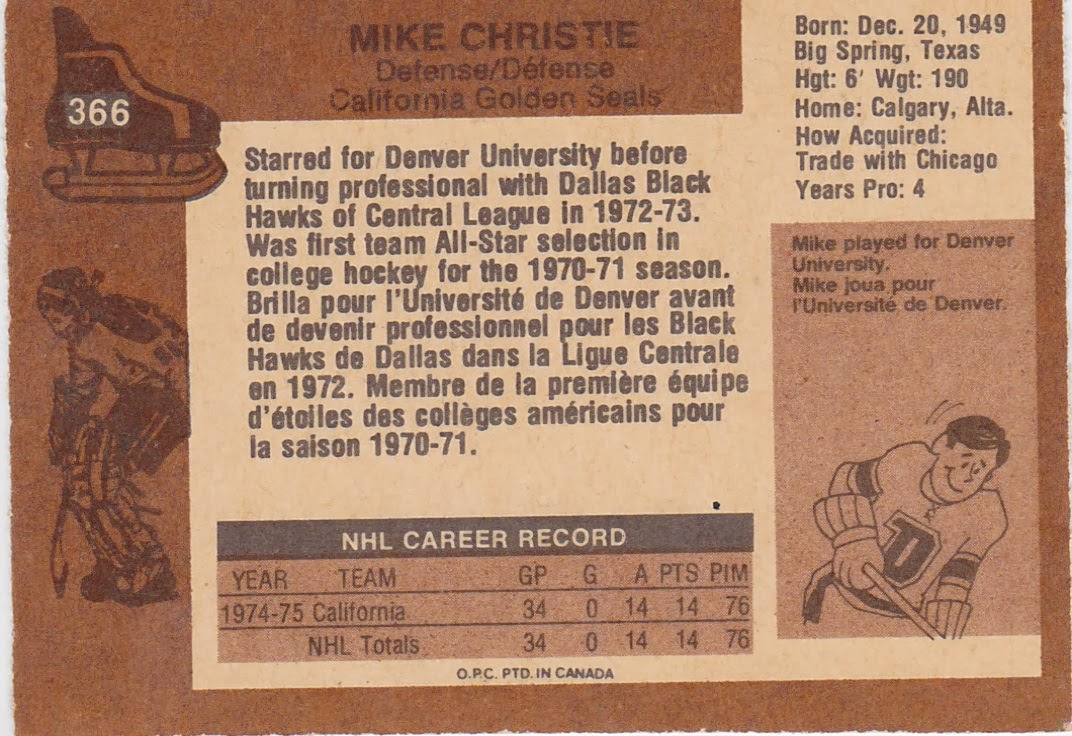 So there you have it. All five Texas-born NHLers. A tiny personal collection about which nobody except me could care about. But stuff like this makes the hobby fun for me.