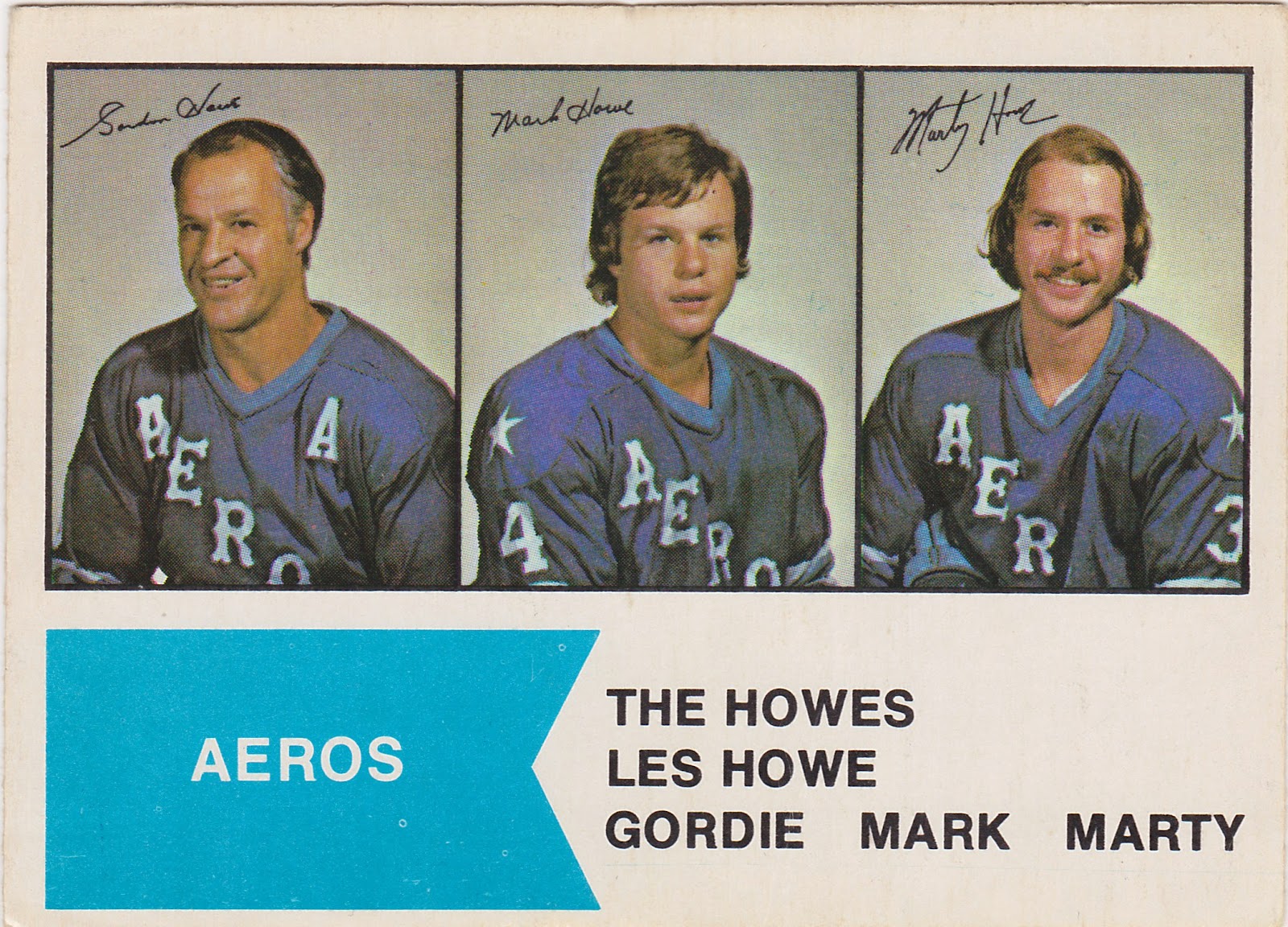 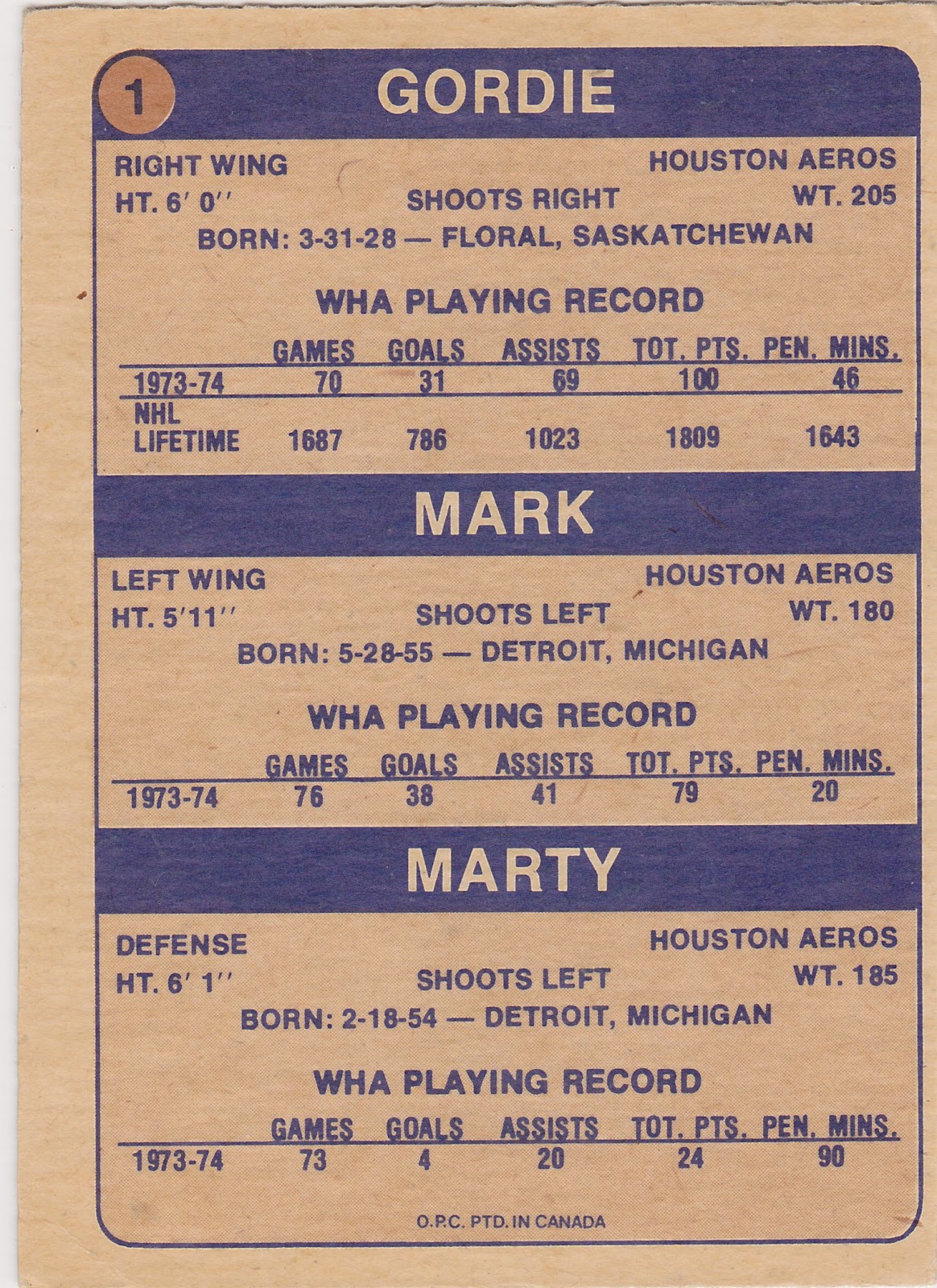 This is a card I've had on my wantlist for a long time. I'd forget about it for long stretches and then someone would show off a Gordie Howe card and I'd be inspired to look around for one in my wheelhouse....decent condition at a moderate price.

It happened most recently when Fuji was gifted with this fantastic Oh-Pee-Chee Howe. I immediately went out and snagged the 74-75 OPC Howe Family card you see above. The WHA in general and the Aeros in particular were just a blast to be a fan of during the 70s. I've related a bit of my Aeros history before. Here it is cut-and-pasted:

Maybe the most fun I've had in sports venues was during the heyday of the WHA Houston Aeros during the 1970s when they played in the decrepit old Sam Houston Coliseum in downtown Houston. Those games were just a blast. The WHA was a rough and tumble league of NHL castoffs and has-beens mixed in with a few young and established stars that the league somehow was able to sign away from the NHL with big money contracts. The franchises seemed to shift every year and I recall more than one team folding during a season.

The Aeros had Gordie Howe and his sons and they captured back-to-back Avco Cups in the first few seasons of the franchise's existence. My college buddies and I loved those teams and going to the games. How could you not? The rival Minnesota Fighting Saints always lived up to their name (the 'fighting' part, not the 'saints' part) and building rocked when they were in town. In their second year they had a guy named Gordie Gallant (isn't that the coolest hockey name ever?) who was a cheap shot artist and enforcer who would whip the Aeros' fans into a frenzy.

After three or four seasons the Aeros moved to the shiny new Summit (now Joel Osteen's Lakewood Church)  and a lot of the fun went out of it. Oh we still loved Aeros hockey but losing the Coliseum took away some of the charm of the whole thing. Eventually the NHL absorbed four of the WHA teams but not our beloved Aeros.

One last WHA story... It occurred the day after the Aeros won their first Avco Cup. A good friend who worked at a department store that had a tie-in with the team was headed into work when he spotted the Avco Cup trophy sitting all by itself on the loading dock. Just sitting there apparently after being delivered by the team for a promo. No one was paying any attention to it as it sat just feet from the morning downtown workers hustling by. Hard to imagine the Stanley Cup in that spot.

My copy of the card isn't bad at all for about 10 bucks. It's off-center off-centre but otherwise just fine for me. Here's a short video segment showing Gordie Howe in action with the Aeros:


And speaking of hockey...yesterday in Target I wasted $2.49 on a pack of "Upper Deck Hockey Something or Other".  I grabbed it because I was bored waiting for my wife to finish her shopping and there was nothing else of interest on the shelves. The pack contained seven cards of guys I've never heard of, the best of which is this one showing this guy knocking the warm-up pucks off the dasher onto the ice. 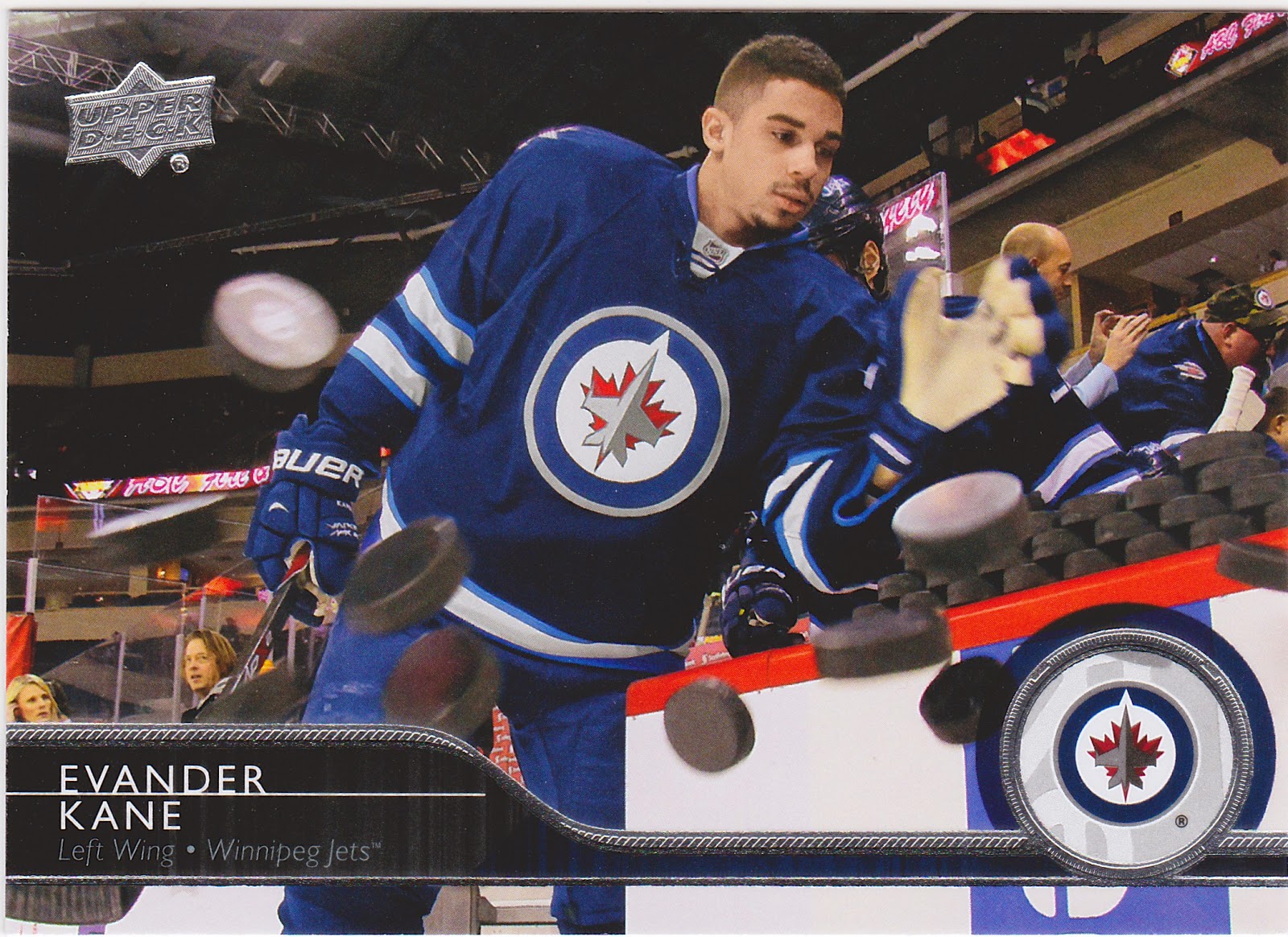 The eighth card is of Phil Esposito, ringleader of the Evil Empire. That was my perspective on the Bruins circa 1970. Nowadays I think Rangers fans just look at them as another team. Another byproduct of the growth of the NHL from 6 to 45 teams or whatever they have these days. 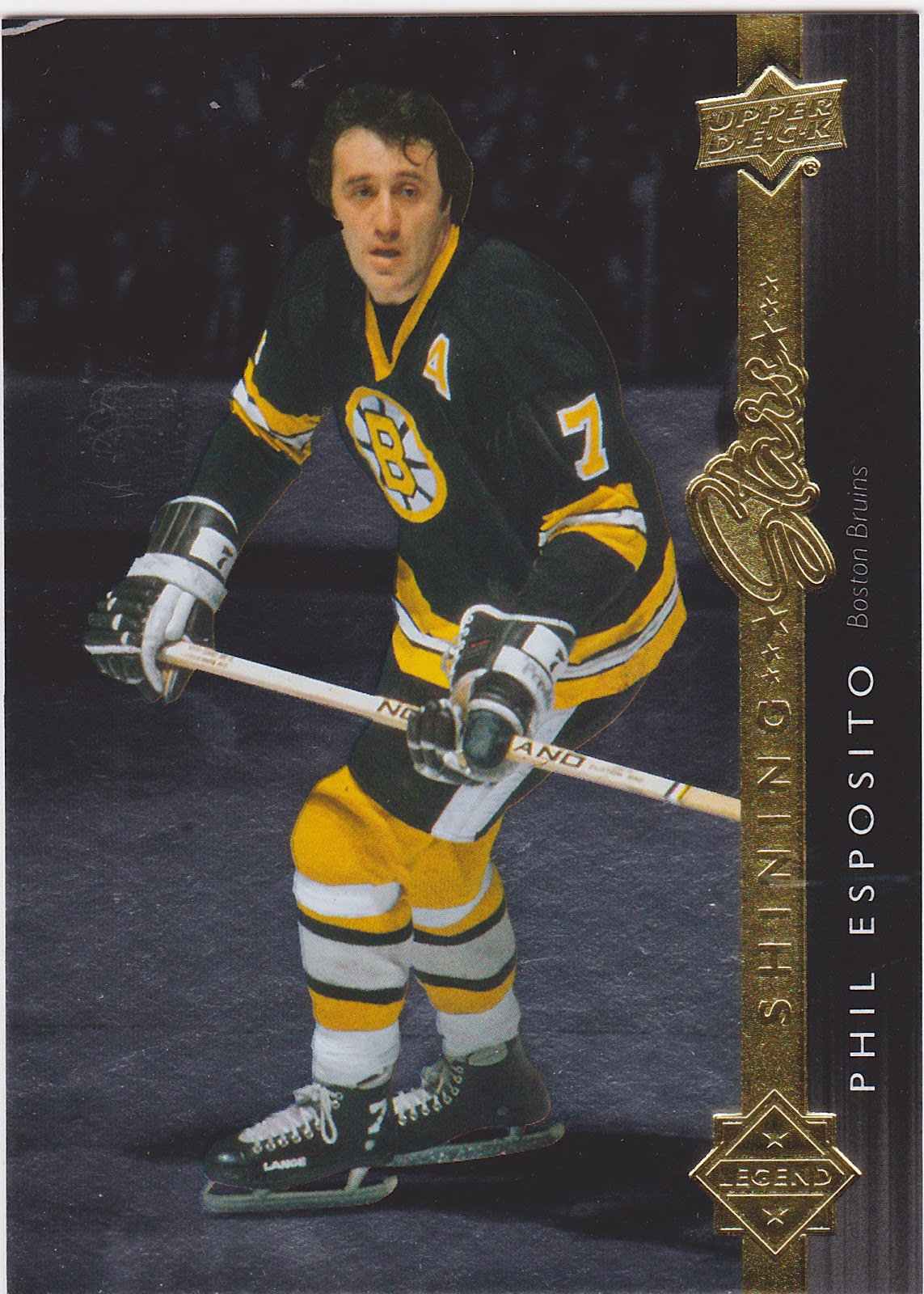 Posted by Commishbob at 9:19 AM