After four years of doing AFL sets Topps took control of the entire production of pro football cards in 1968. This 220 card set was made up of two series of very colorful cards

There are nine Colts in the set and there was no team card. Each team was color coordinated and the Colts red/yellow combo is certainly one that stands out. 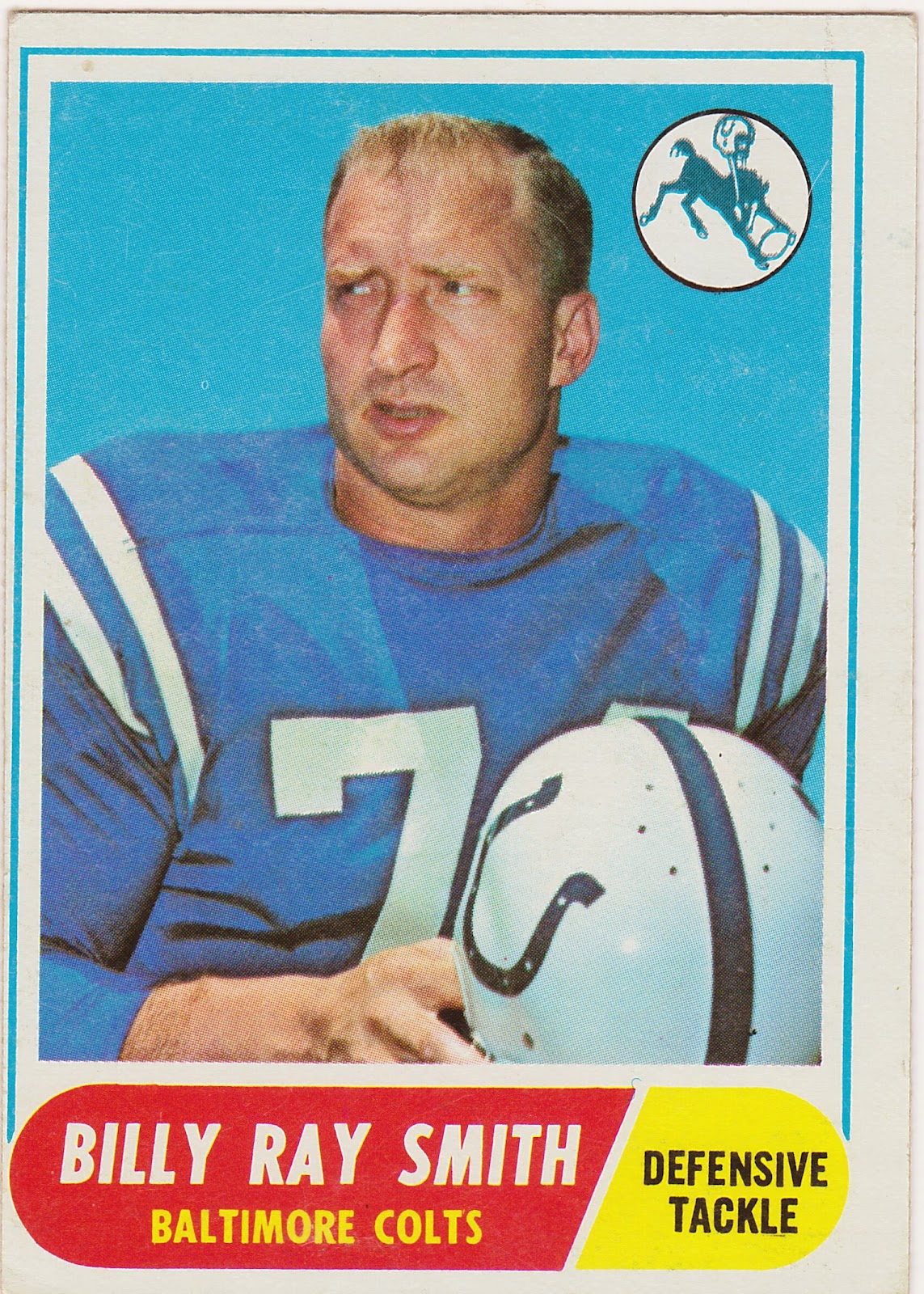 Most (but not all) of the Colts have posed shots showing them from the numbers up and holding a helmet. The 'leaping colt' is here in a circle making his next-to-last appearance on Topps cards. 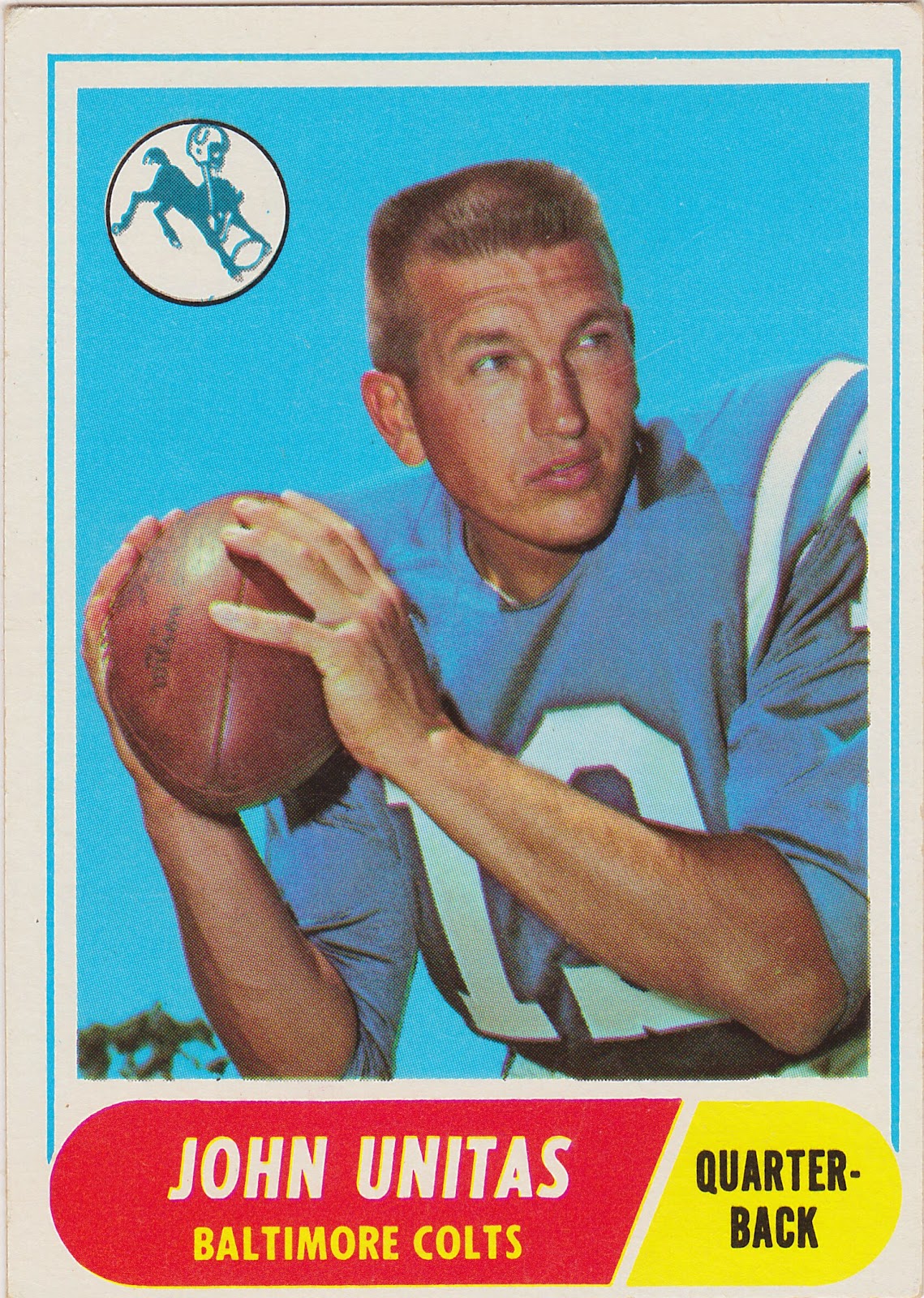 This Johnny Unitas card is the poster boy for 'check what you have before you buy something' movement. I had one for my Unitas PC and apparently had an extra from way back that I had stuck in the same pocket in the binder. Not remembering that I went out and found one for this project on COMC. Not remembering THAT I picked up a '68 Colts complete set on eBay. I realized what I had done when my COMC package arrived. And so that's how I came to own (briefly) four copies of this card. I sent one to a non-blogging Colt fan I've known a long time and he was excited about it so it wasn't a total screw-up, but still. 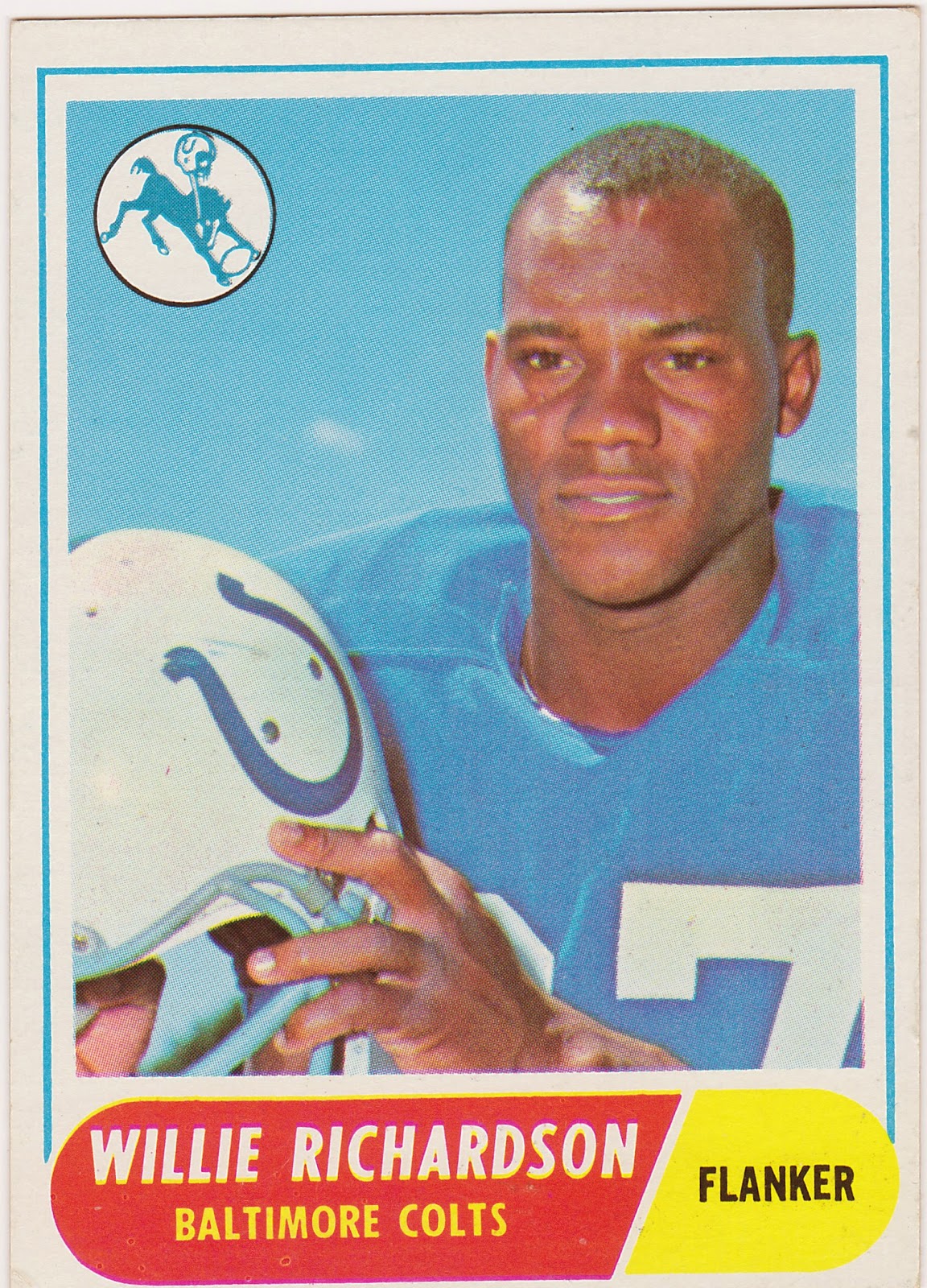 Even when John Mackey was smiling he was still a bad ass. One of the great injustices is his long time exclusion from the Pro Football Hall of Fame. Resentment over his work as head of the Players Association by stuffy old-guard writers kept him out for many years. He talent changed the position of tight end forever. </rant> 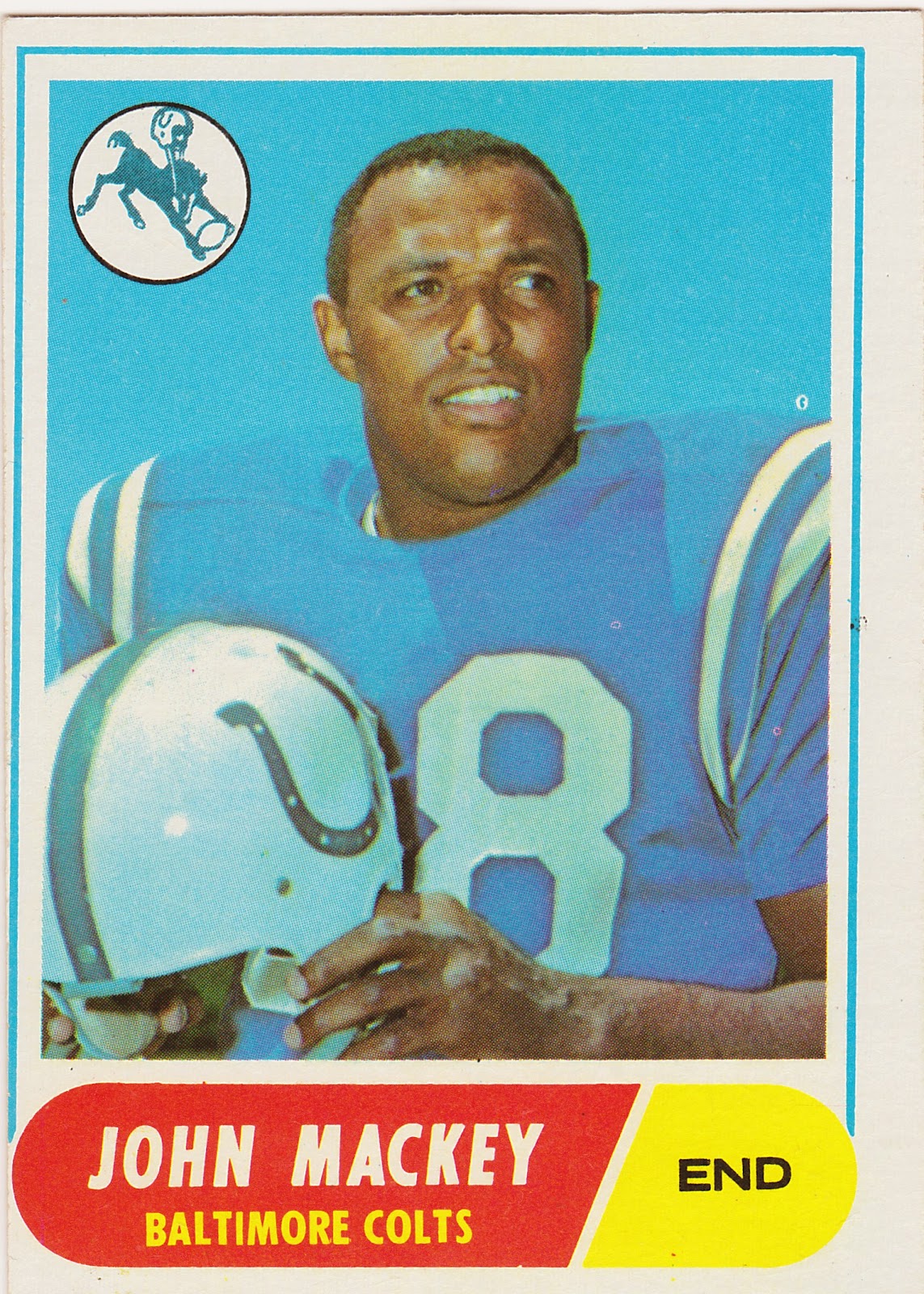 The backs of these cards are done in green with a series of boxes for number, name, vitals and a blurb. The skill players get a minimal stat section. And sadly the honors listing that Philly Gum always had is gone. 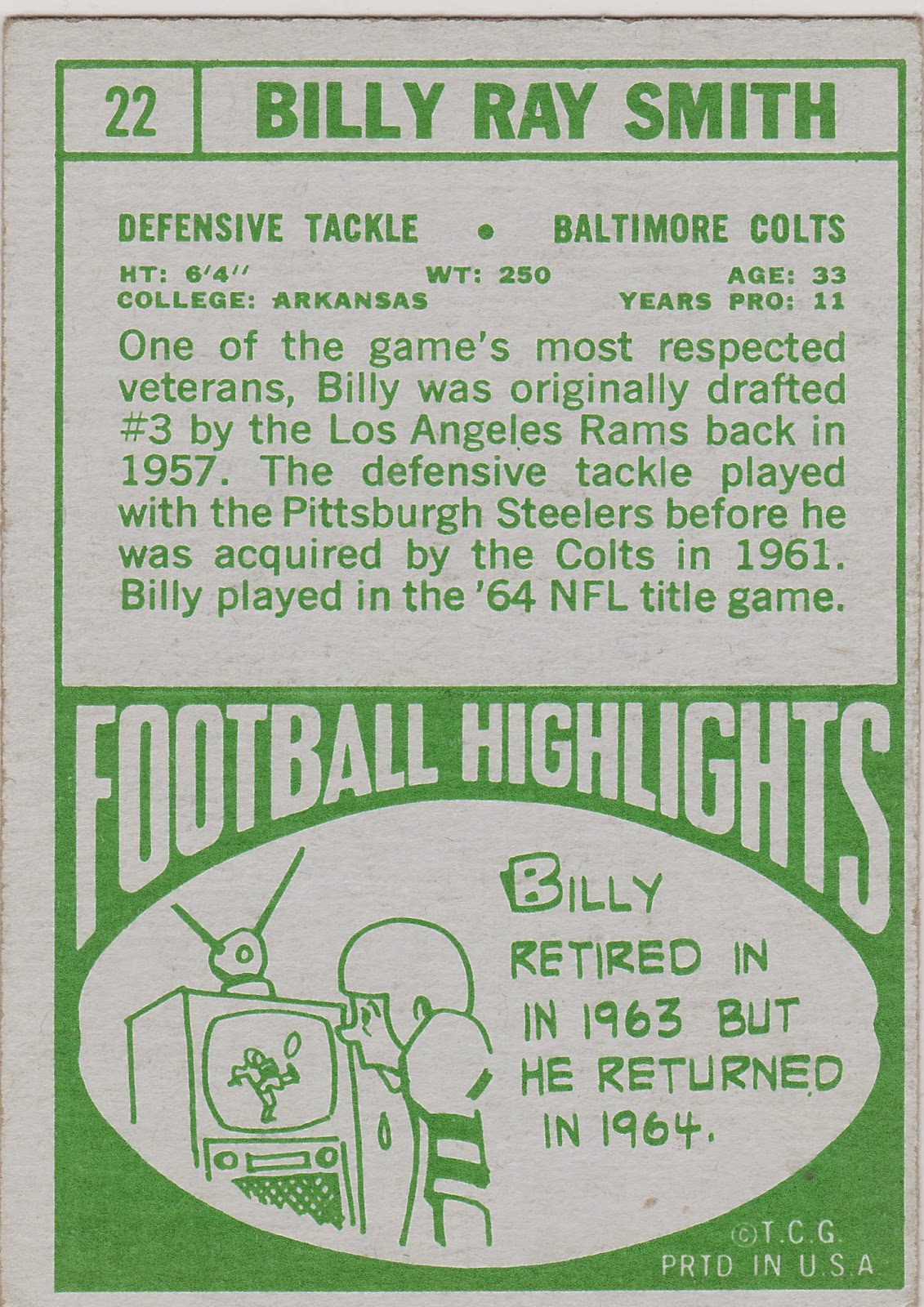 Some cards got 'highlights' cartoons, others had the tried and true 'coin rub' in that section. The Colts cards I have vary greatly in coloring as far as the backs are concerned. Some are much brighter than others. So much brighter that I wonder if it the effects of time or actually different cardboard stock. 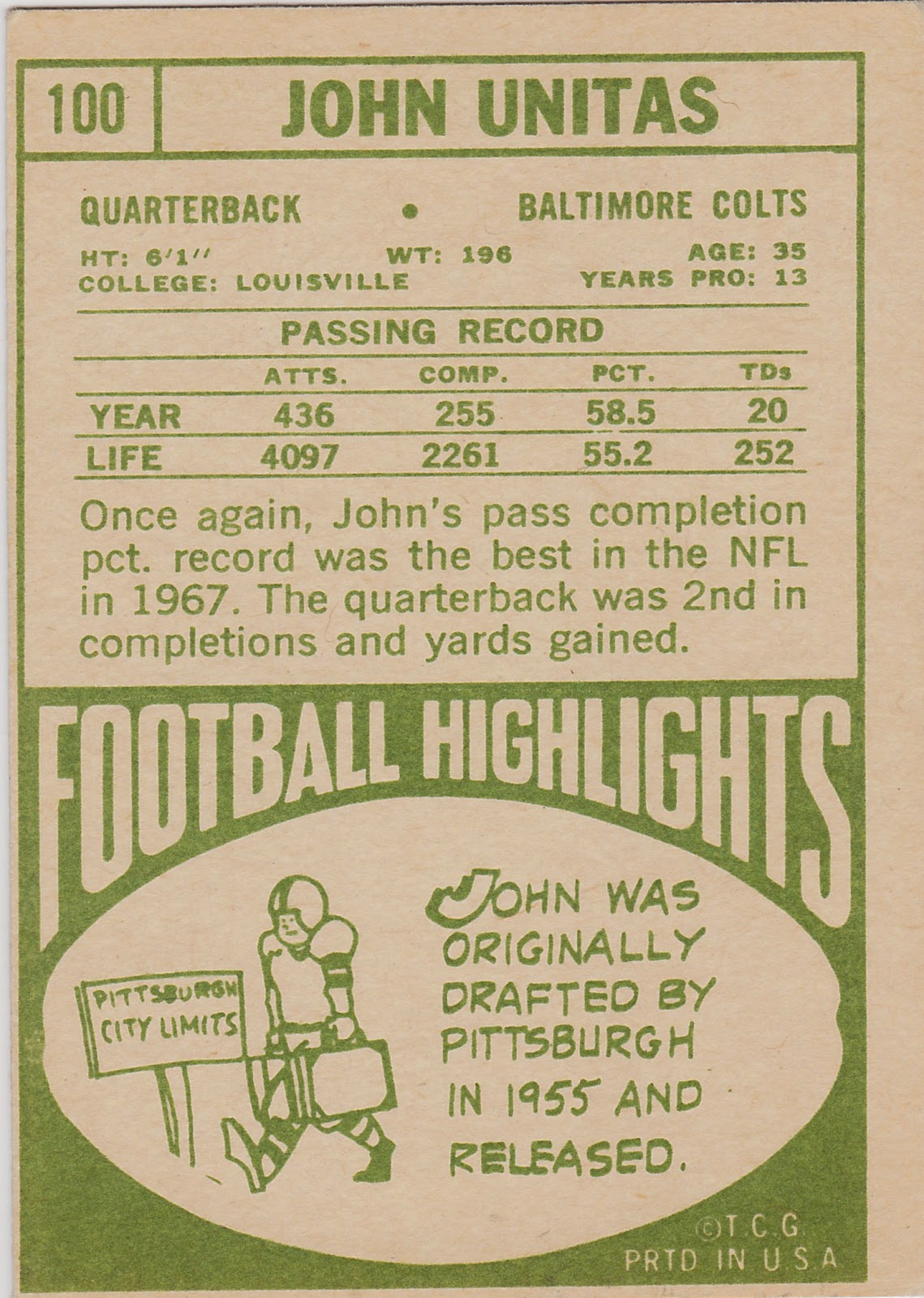 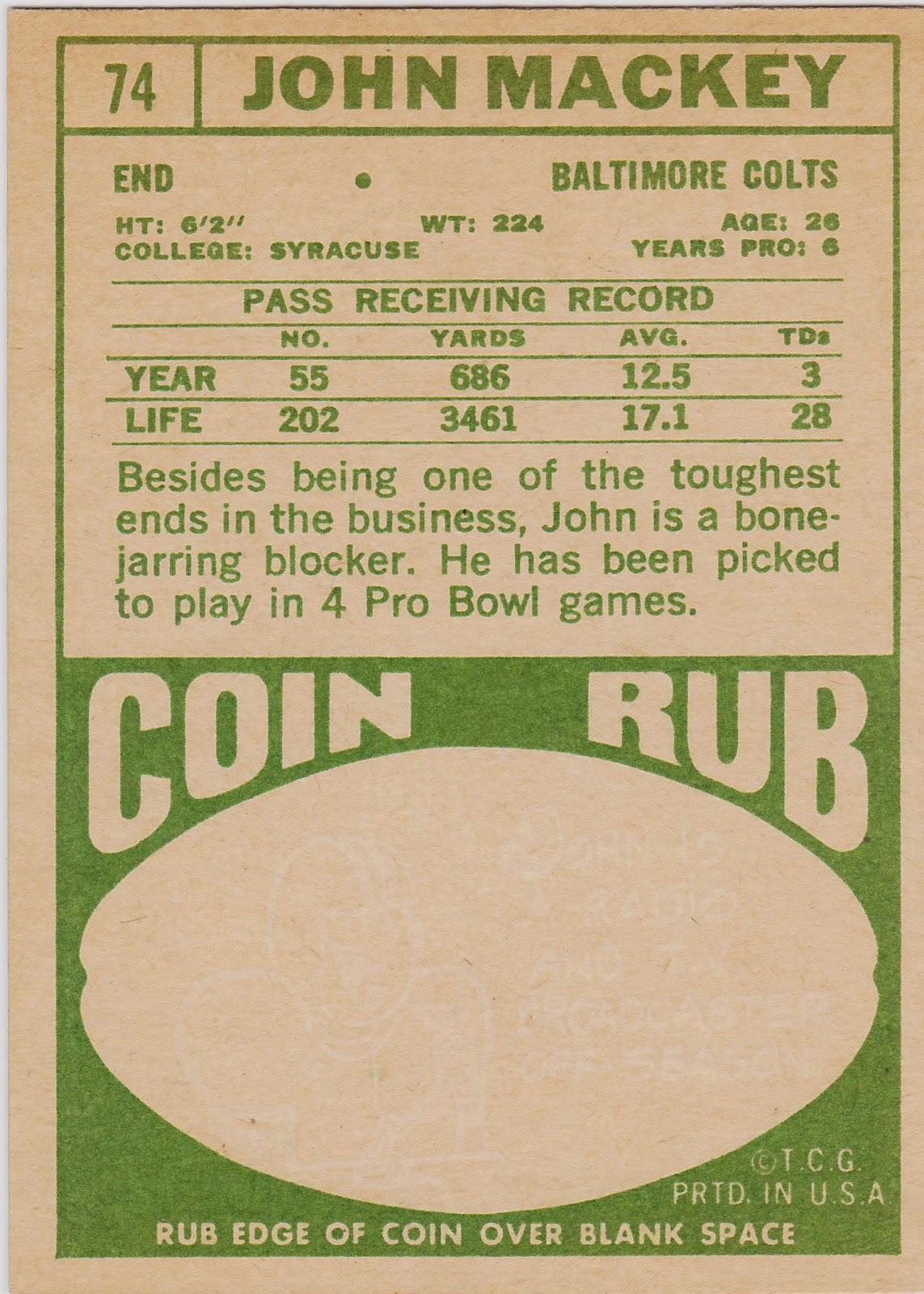 But that's not the end of the story.... some cardbacks didn't even have anything related to the player on the front! 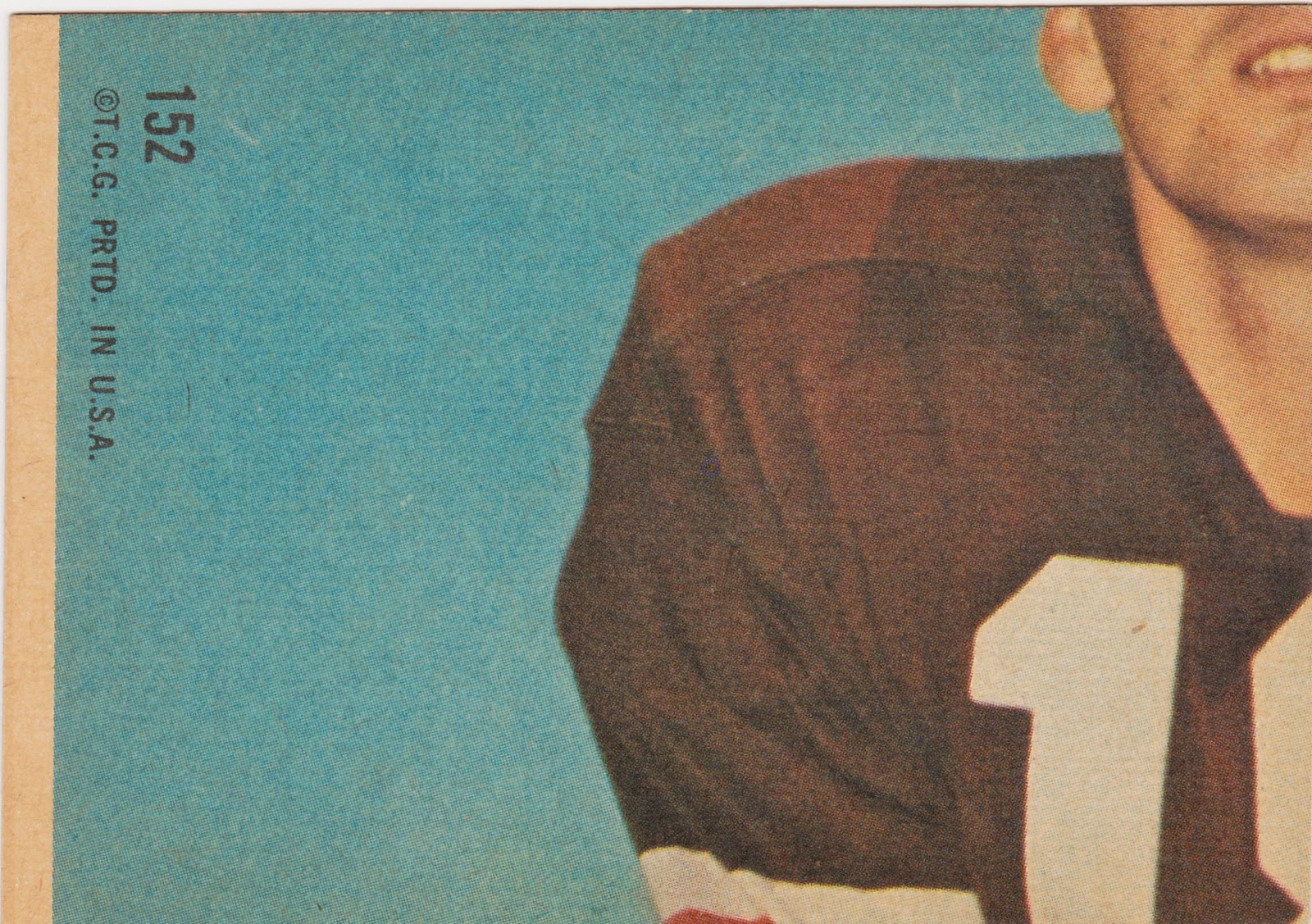 This is the back of Willie Richardson's card. It's a puzzle piece that when complete forms a portrait of Len Dawson, Kansas City's Super Bowl quarterback. Two things come to mind: 1) I'd be hacked if my favorite player got a puzzle piece for the back of his card and 2) what the heck was Topps doing using a stale shot of Dawson in his Brown's uniform? He'd been gone from Cleveland since 1961! There was also a puzzle of the other Super Bowl quarterback, Bart Starr.

And speaking of Starr... Topps did something very unusual in the 1968 sets. All cards of the Packers and Raiders, the previous Super Bowl participants, were done in a completely different format. They were horizontal with a pen-and-ink background to the photos. Here is Starr: 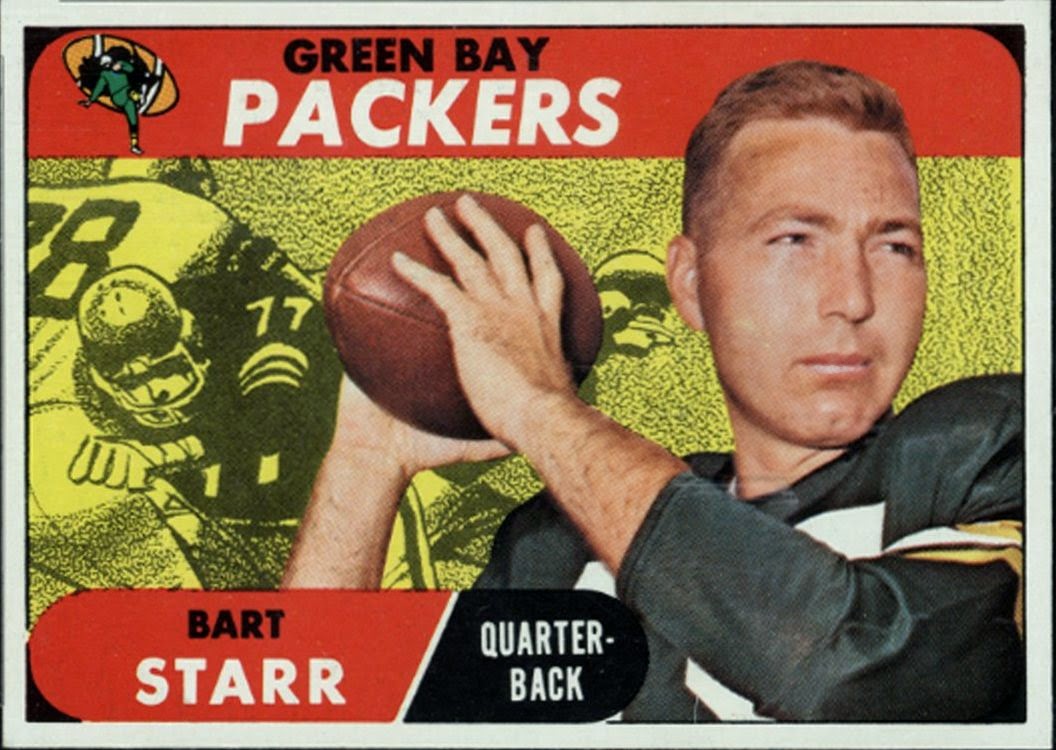 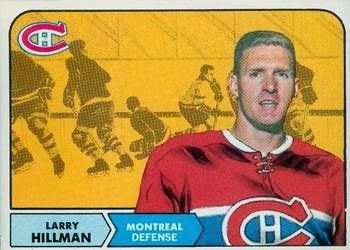 There were posters inserted into Series One football packs. The Colts have Johnny Unitas in the set. Really a nice bonus for pack buyers in '68. I picked up mine late last year. 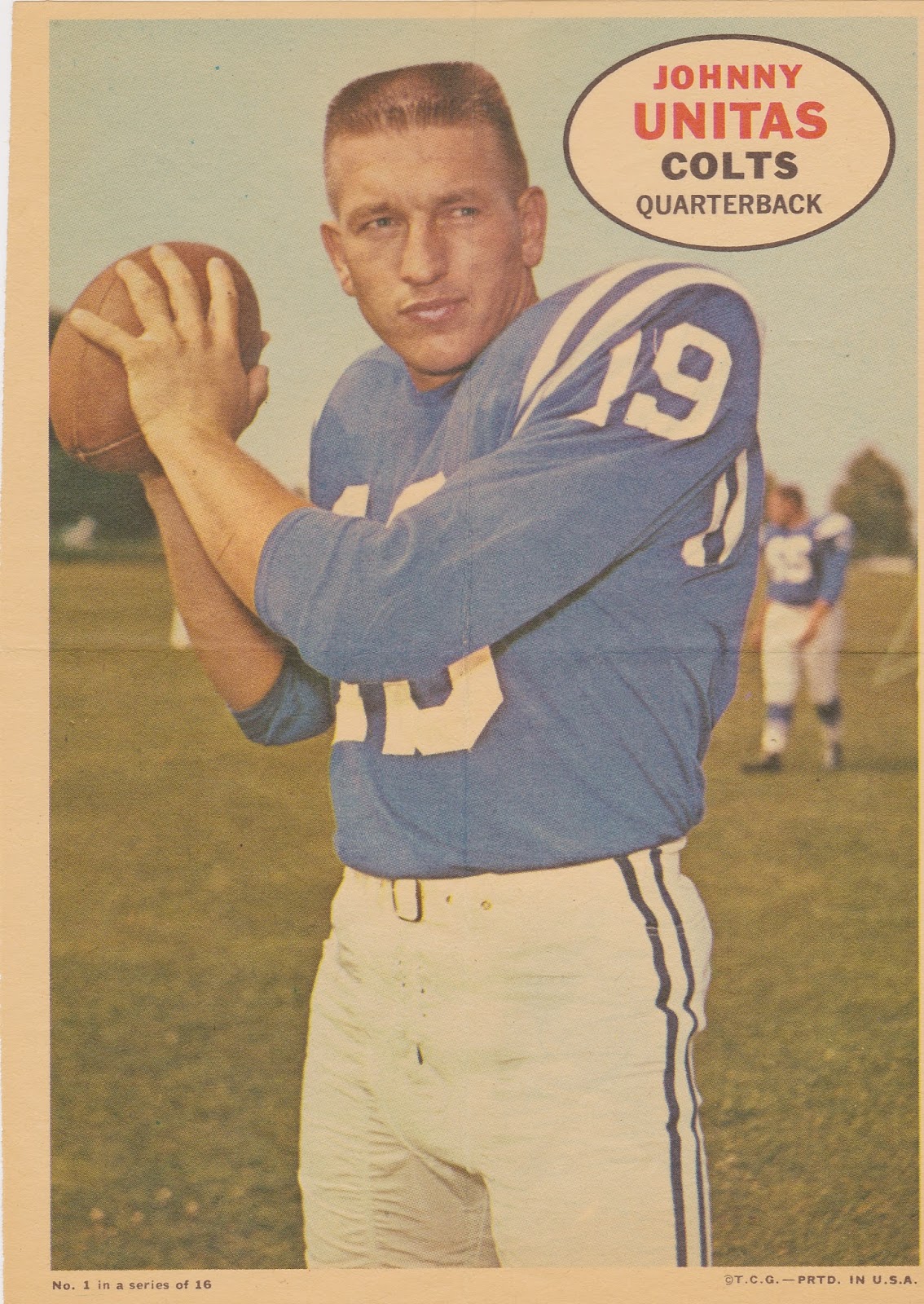 Topps issued inserts in second series packs, a stand-up set of 22 players. Willie Richardson is the Colts' rep. Maybe it was Topps' way of making up for his wasted cardback. I found one cheap and yes, it's way miscut. 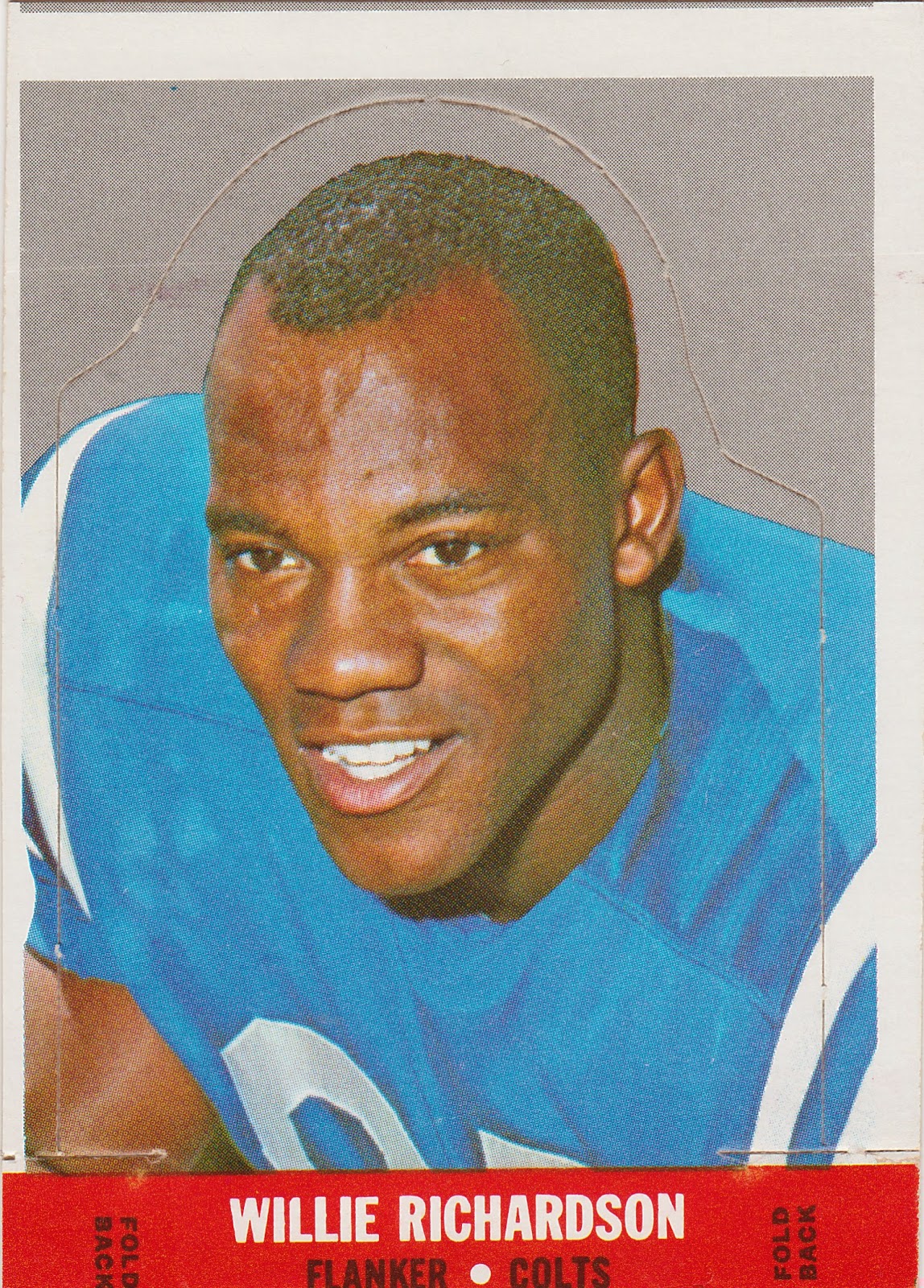 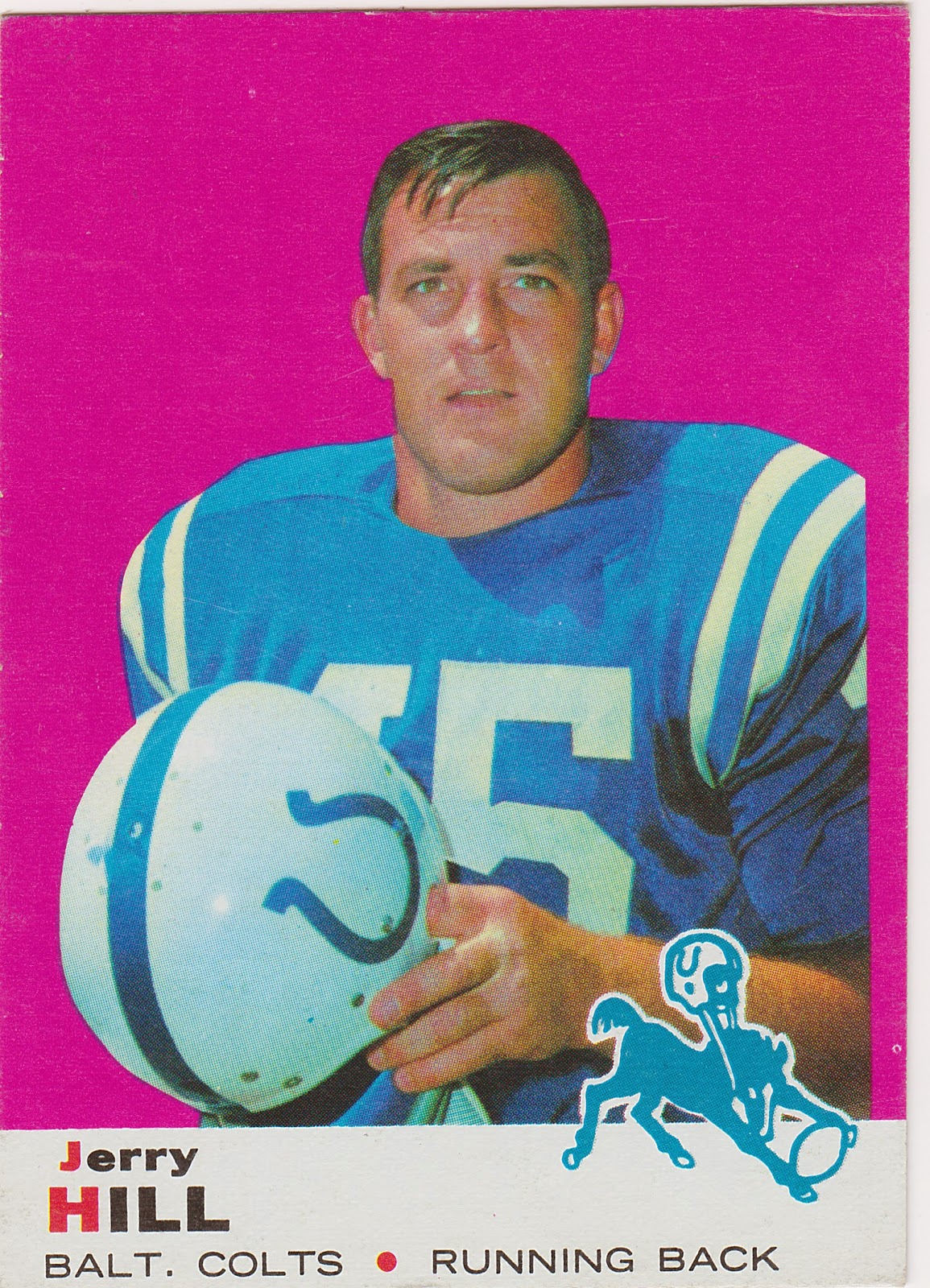 Last month when I was posting Colts cards I'd received from Mark Hoyle I mentioned how I thought that Topps took a step backwards with the '69 set. And completing the two sets of Colts cards hasn't changed that opinion.

I'm just not a fan of the color backgrounds. They have a certain charm on the '58 baseball set but a decade had passed and yet Topps revised that old idea. There were a dozen Colts in the set. The solid backgrounds were red, pink, orange blue, yellow and green. The Colts didn't get any yellow ones but hit the other five colors. 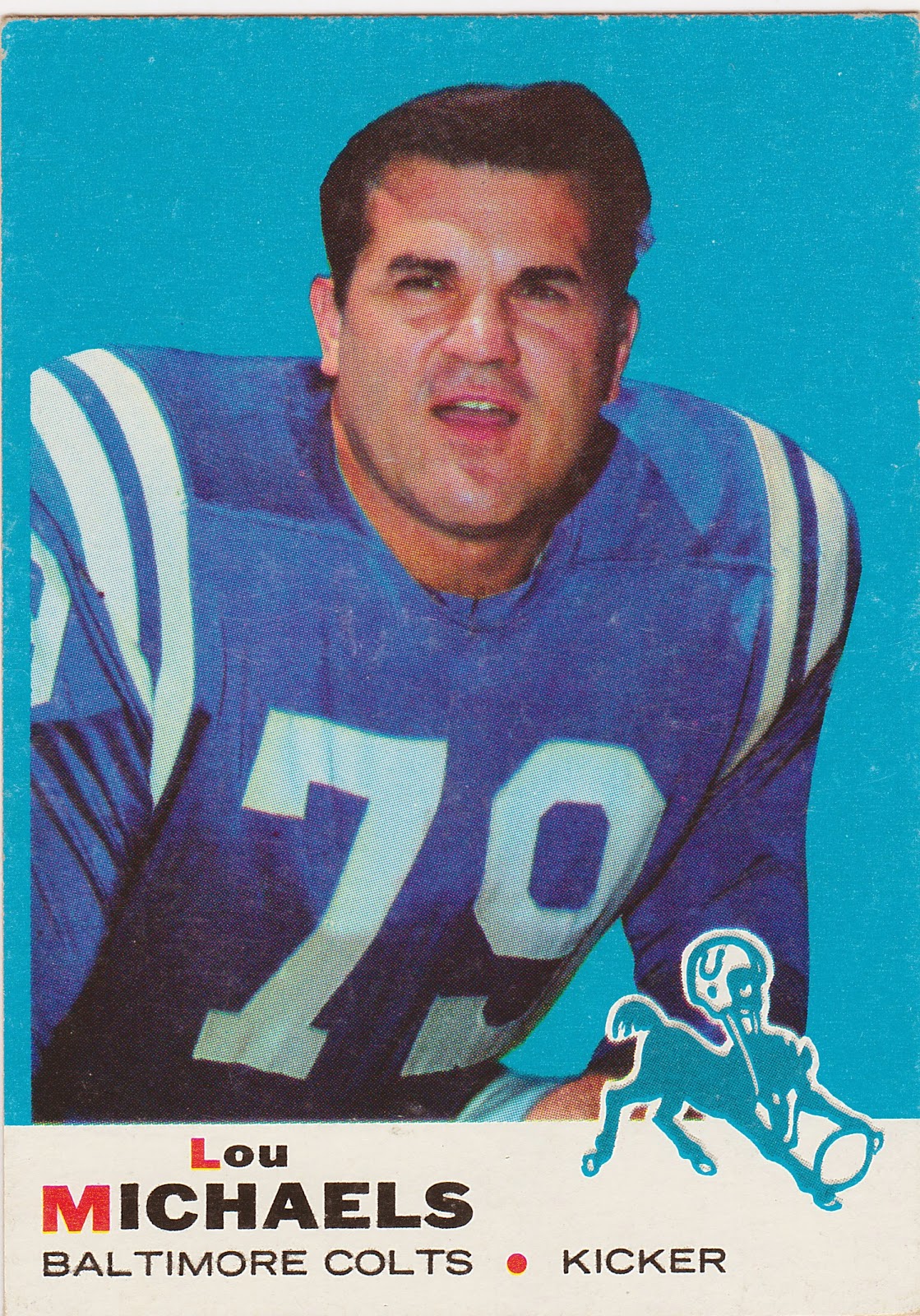 The photos are pretty much a continuation of previous Topps shots, posed 'action' or portraits. Earl Morrall's card shows him in the Lions jersey although he'd been with the Colts all through 1968.

As I type this it occurs to me that there hasn't been a Colts player shown on a card wearing a white Colts jersey since the 1953 Bowman set. Wendell Harris wears white (barely visible) on his '62 Topps rookie card. It's likely a shot of him in his LSU uni. Lou Michaels is listed as a Colt in the '65 Philly Gum set but he is wearing his old Steelers white jersey. Checking ahead there is no Colt shown in white until the '72 set. 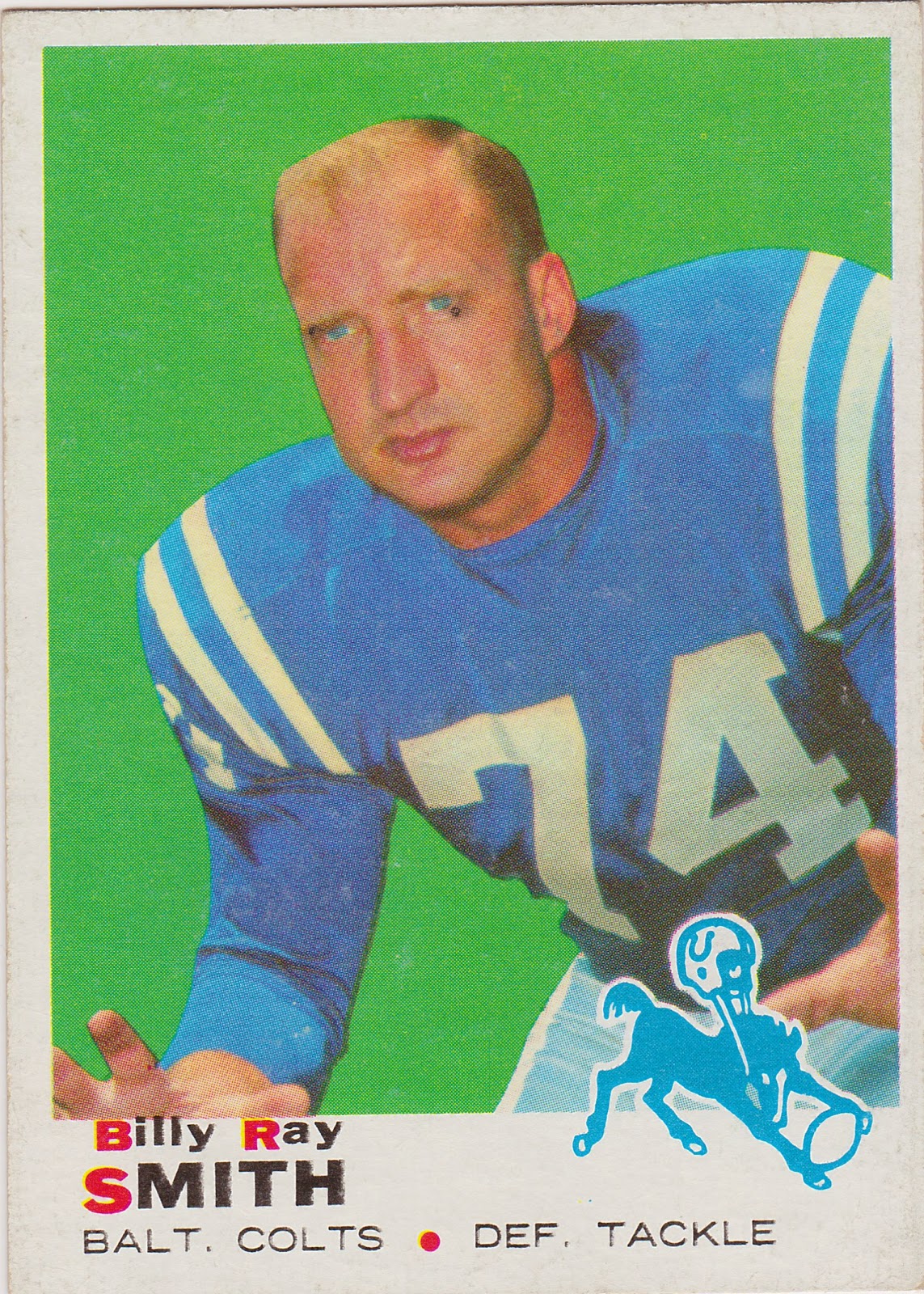 The first series in this set had no borders around the top color block. The second series has borders. They don't help much but I think they do make a tiny improvement in the look of the front. 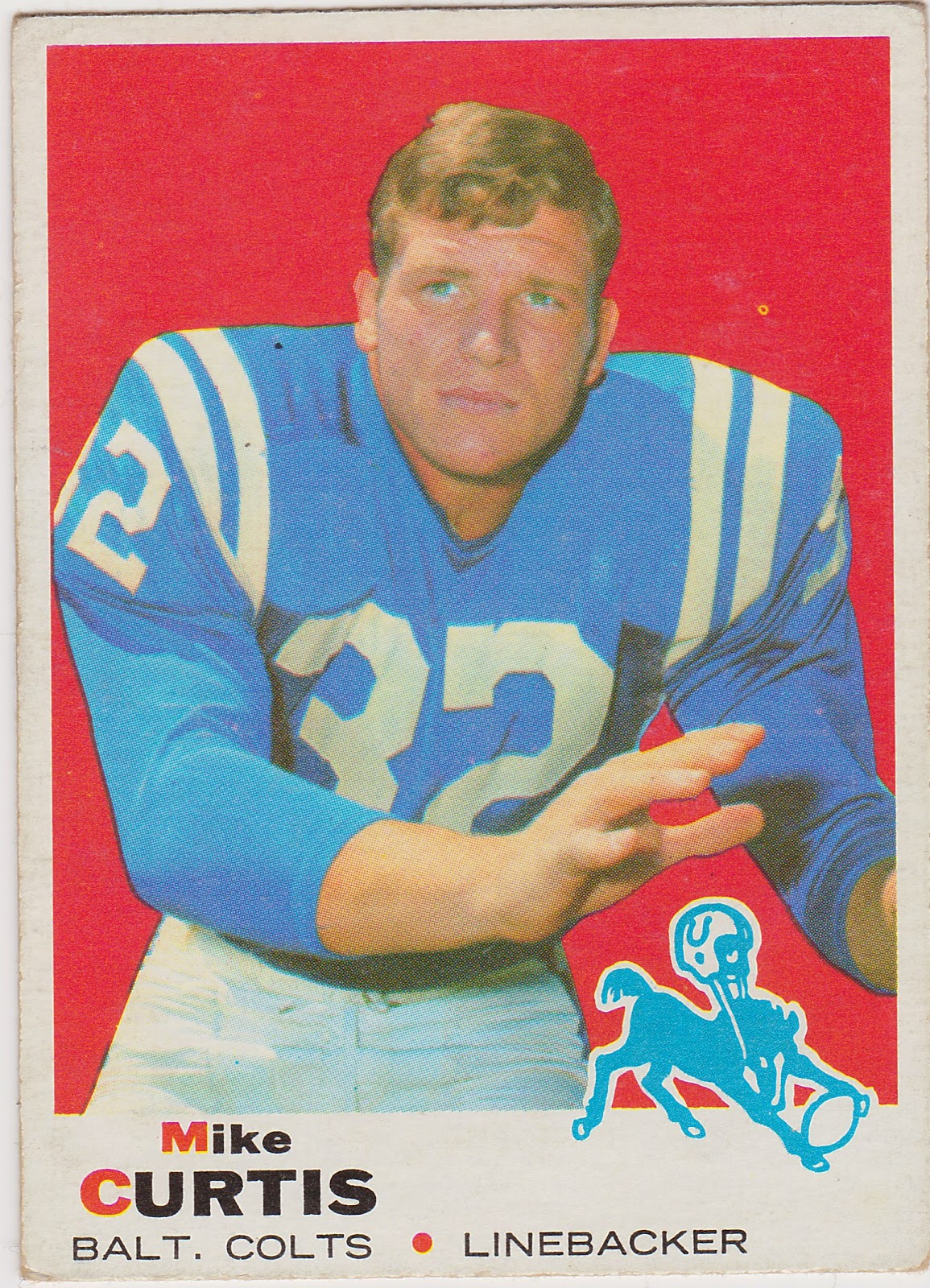 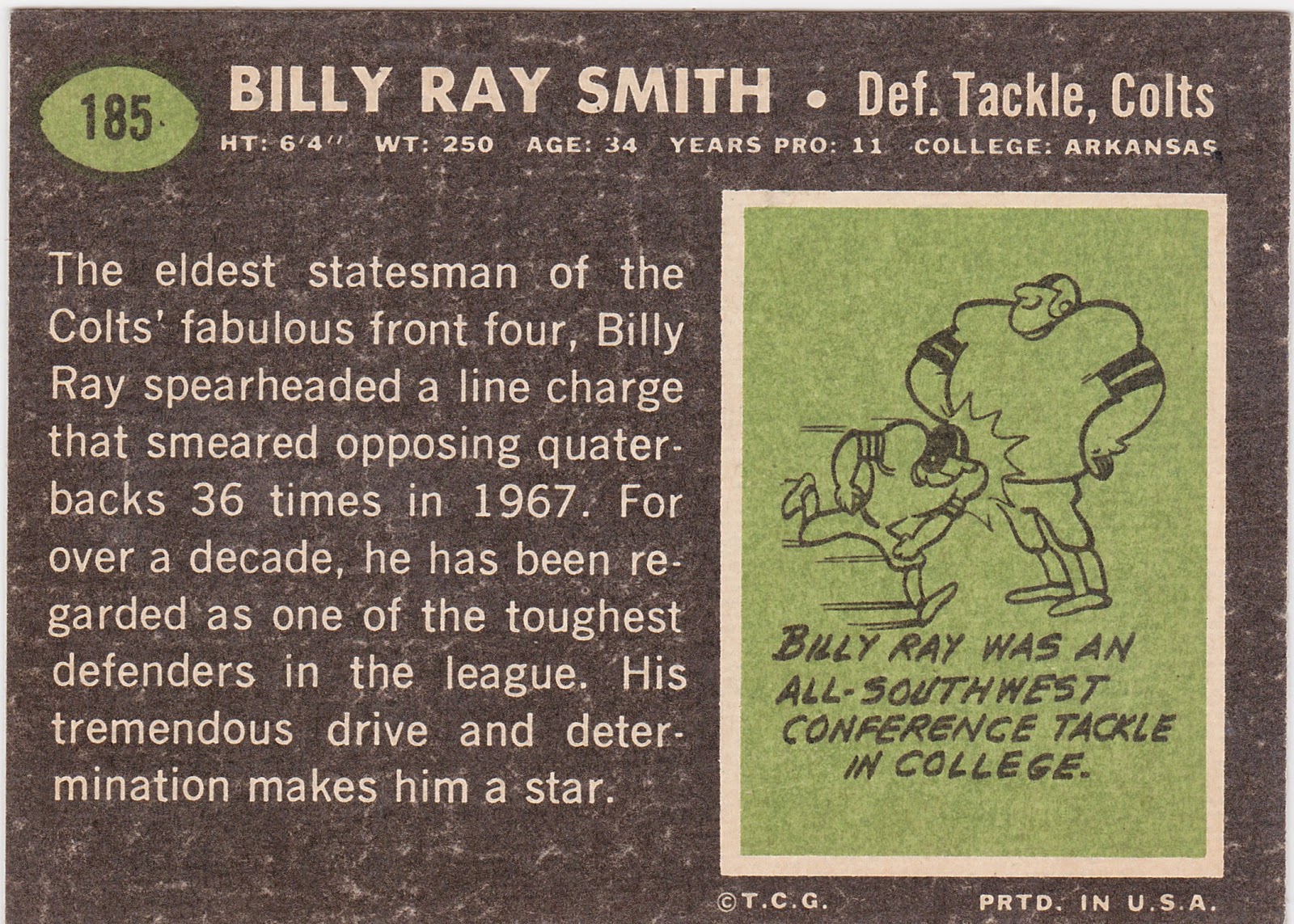 The backs of the cards in the '69 set were nothing to write home about either. Black and green with white type is... well....different anyway. The cards give basic info, a short bio paragraph and a stats box for those who handle the ball. Most players had a cartoon with a career fact. 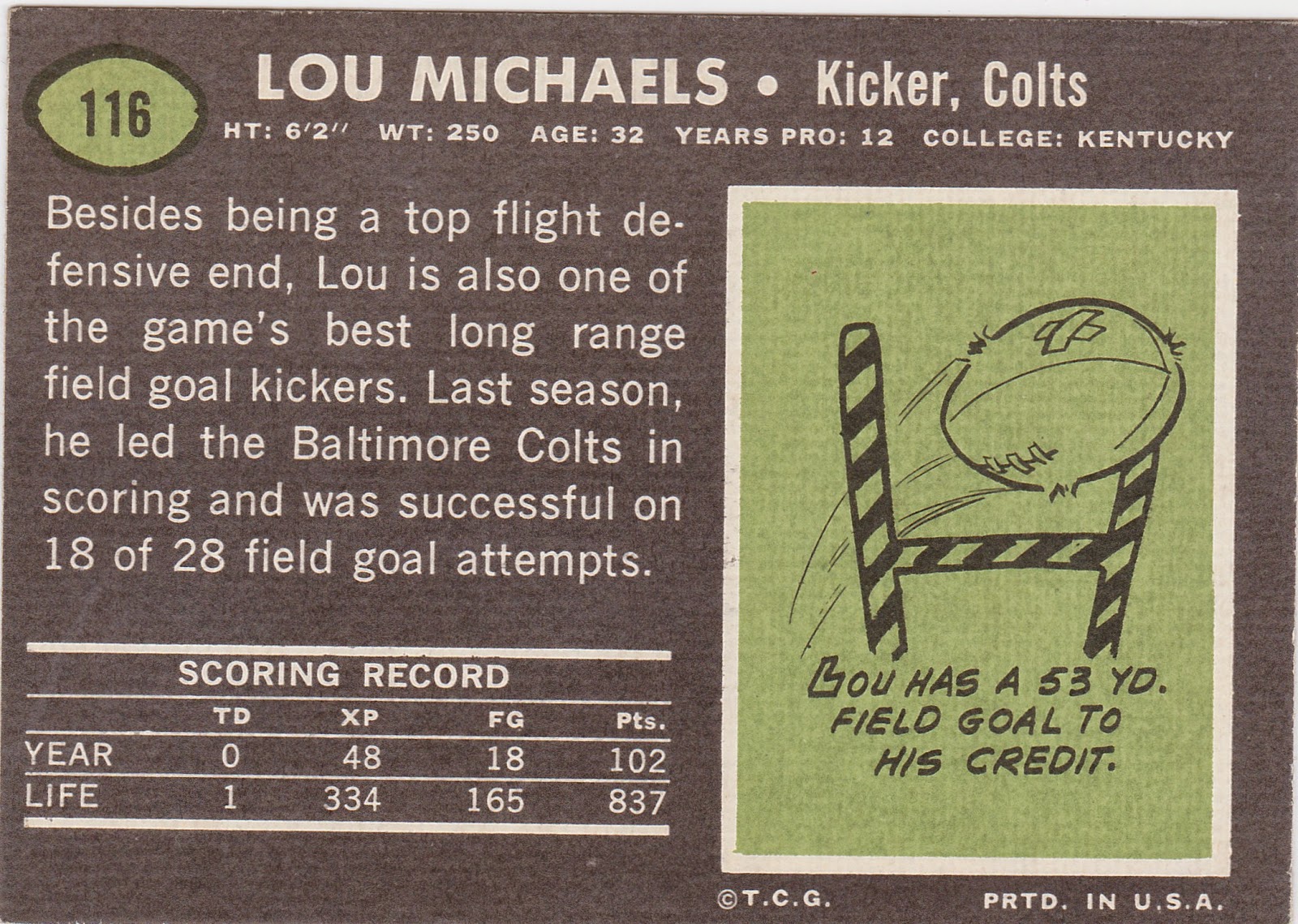 Some cards had the 'coin rub' cartoon box. That gimmick never got old with card manufacturers apparently. 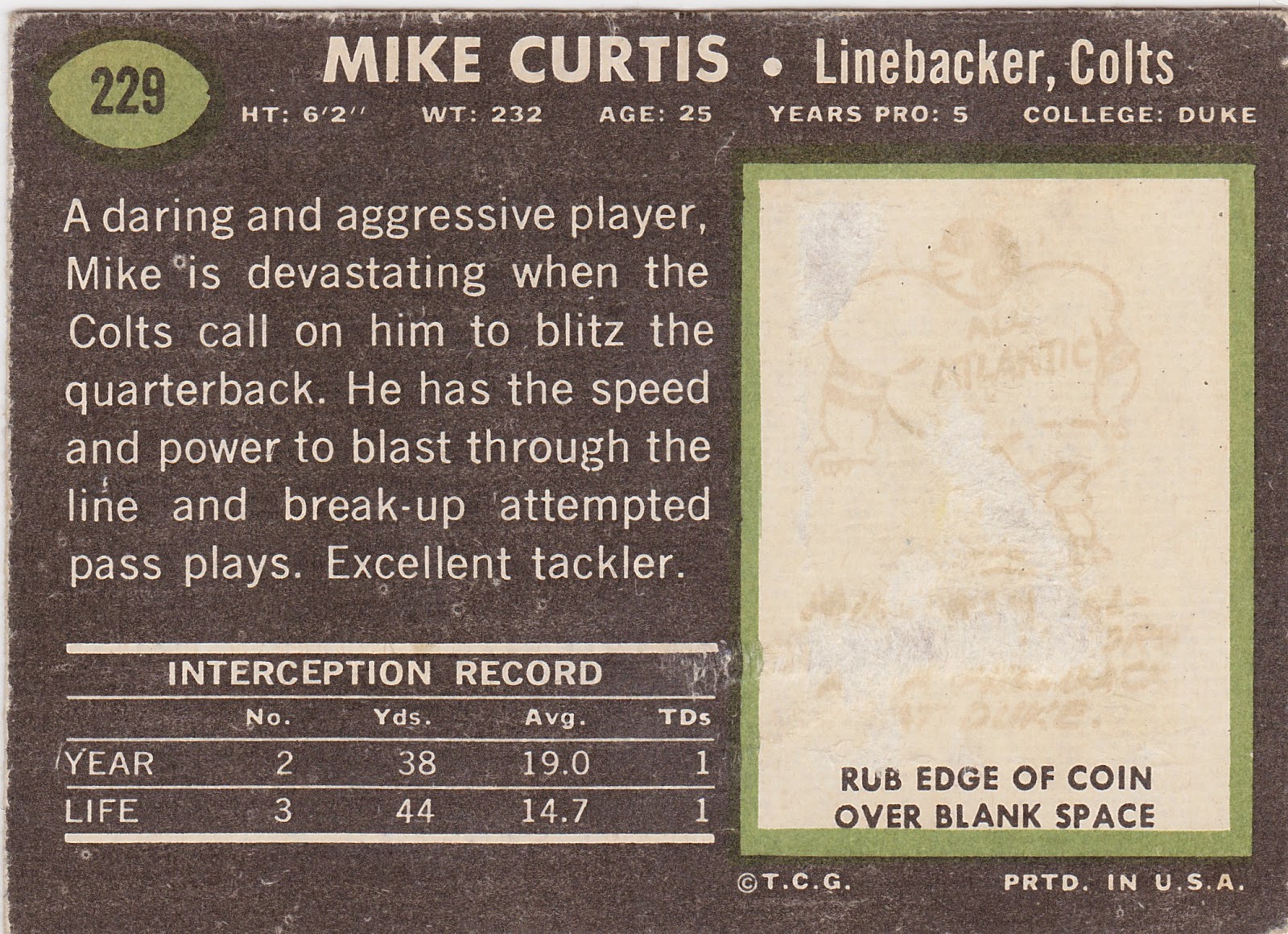 Topps packs in 1969 included these 'Mini-Card Albums' which were designed to house small photo cards which were also inserts known as '4 in 1's'. 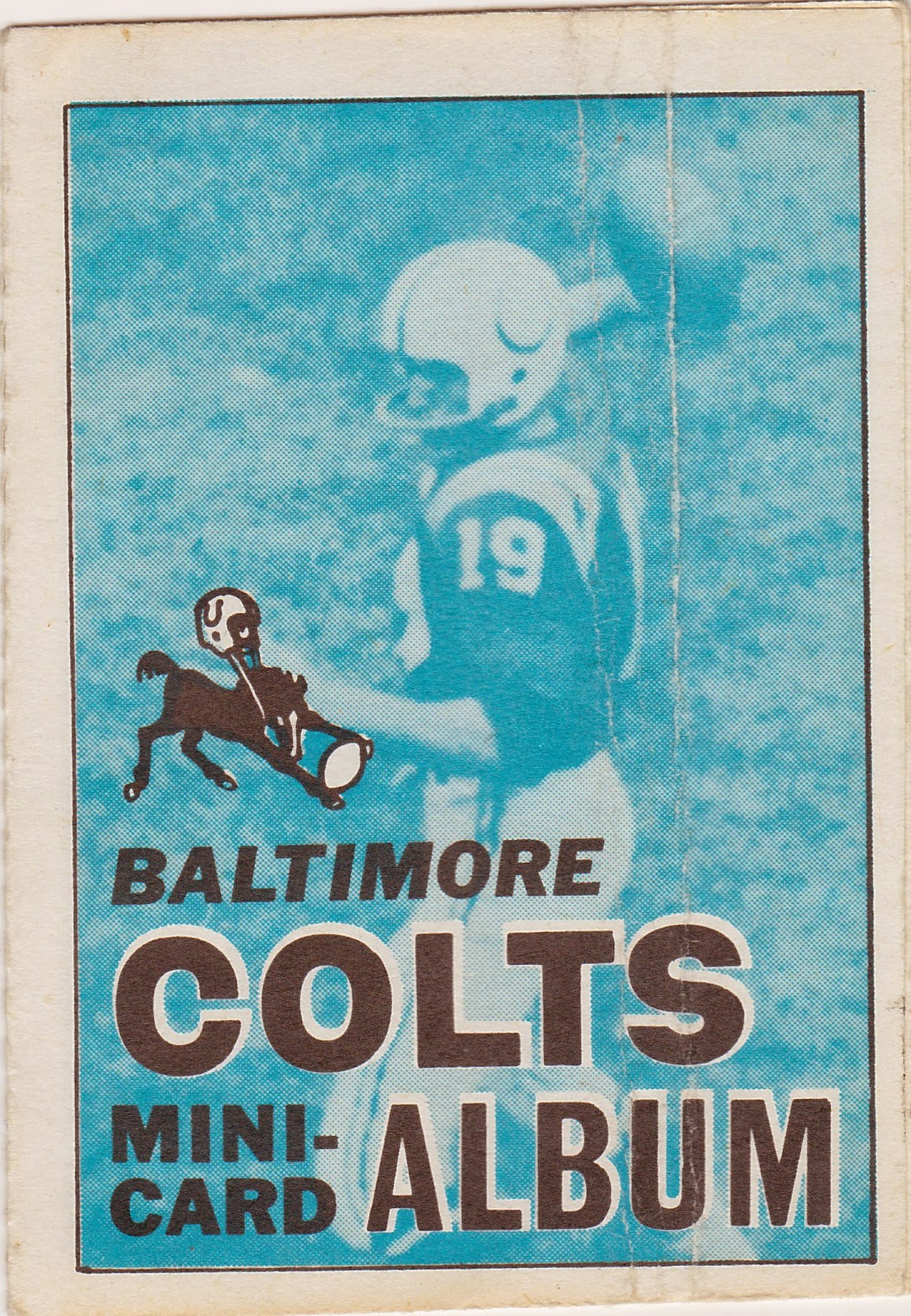 Above is the front cover of my album, and if you ever wondered about Topps ability to squeeze every possible use out of an image in their files check out Zeke Bartkowski's 1962 Topps card: 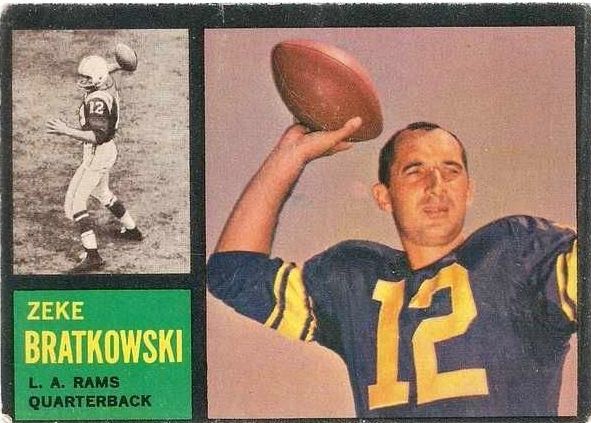 Here's a look at one of the inside pages. The 'cards' were supposed to be moistened and stuck in the album. 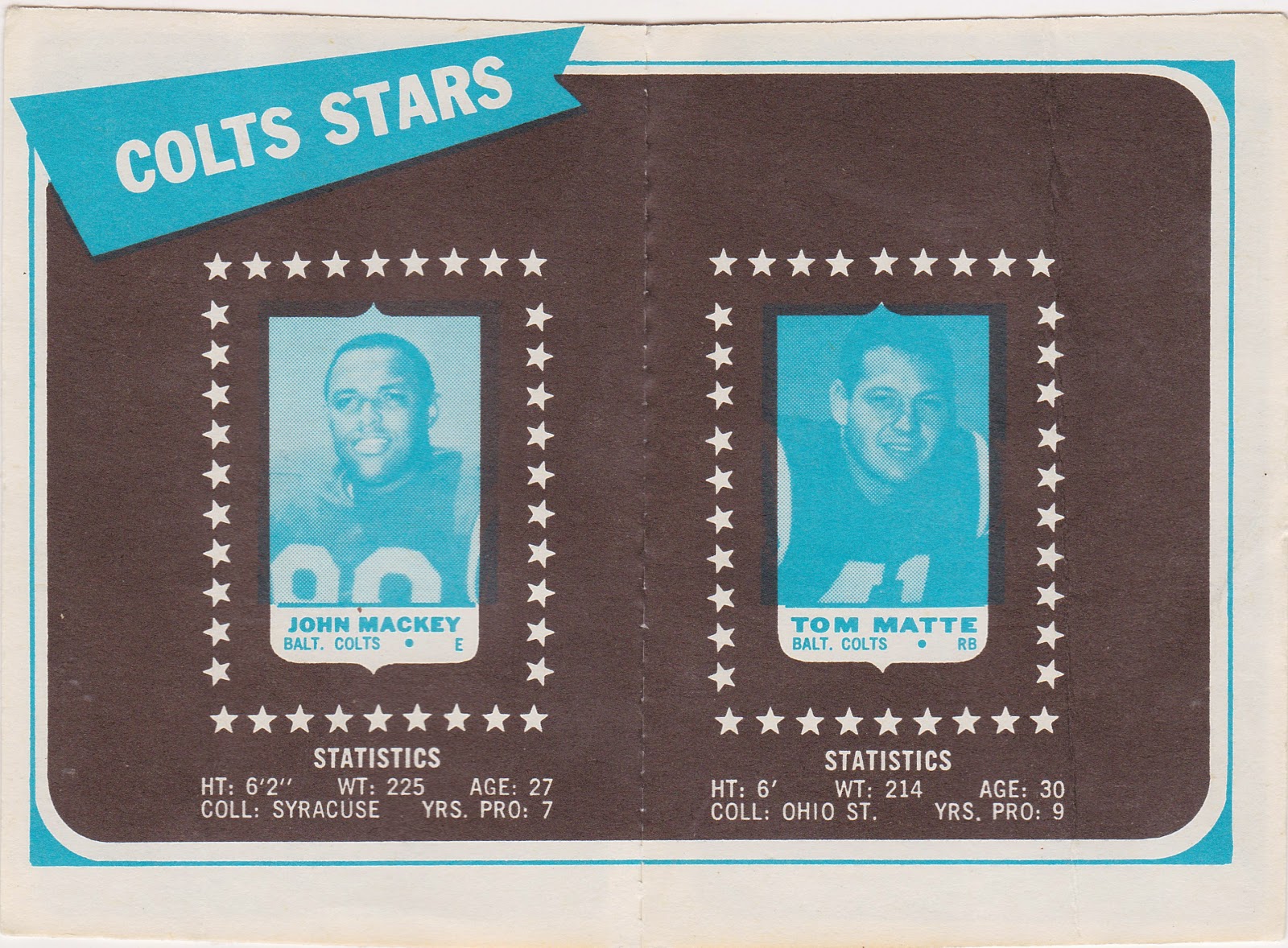 Ten Colts are included on 4-in-1's. I have five of them, all as part of the complete four player 'card'. The individual ones are just too small and don't interest me. I thought I had another one but the Tony Lorrick I snagged from a dealer's junk box isn't really a Colt card. He's shown in the Blue and White but he's listed with his new team, the Saints. I should have looked closer.

Online these things range from a buck for individual 'stamps' to outrageous prices for 'graded intact inserts. 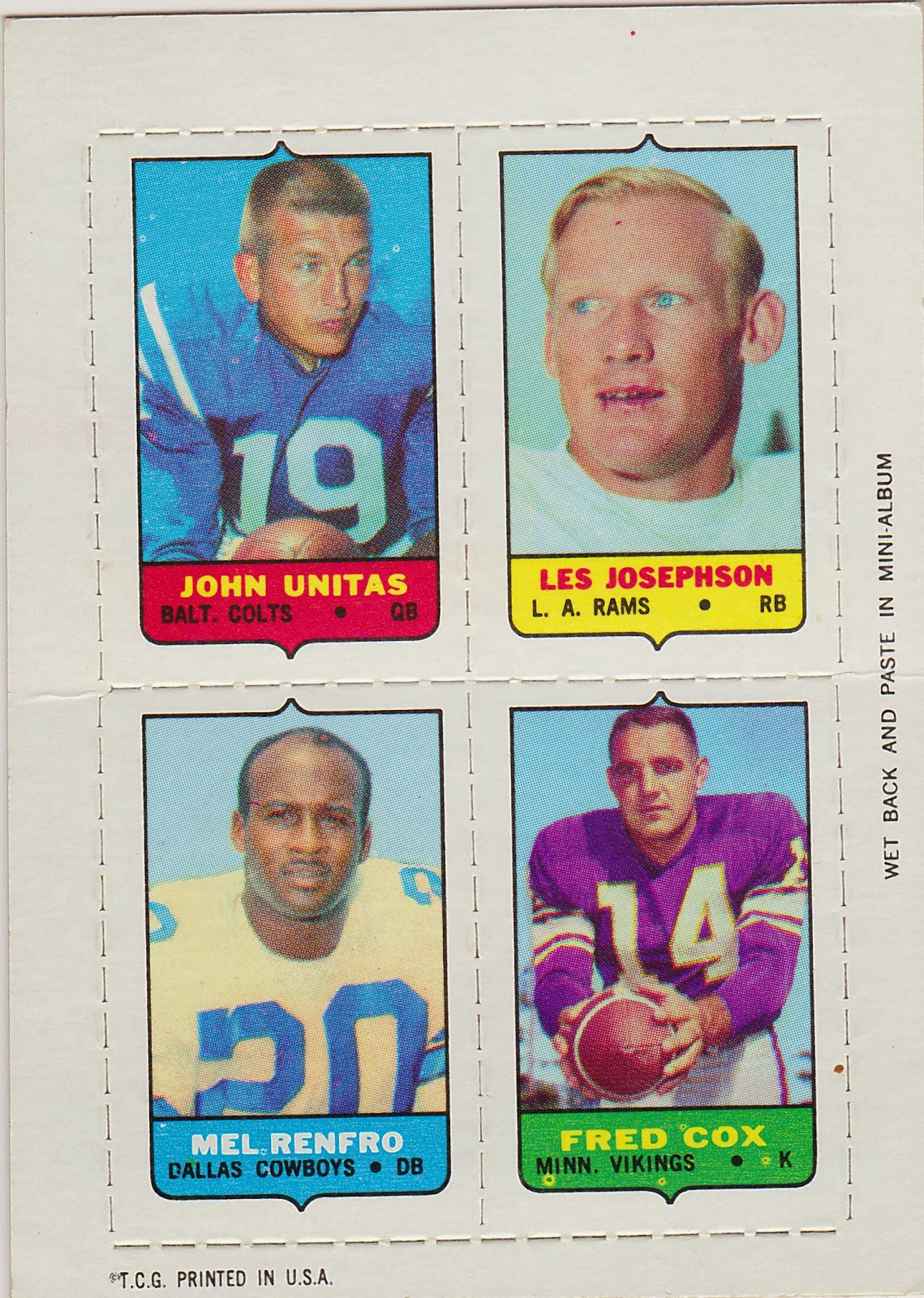 Also available in 1969 were Glendale Stamps. They were also meant to be put in an available album. I did a post on these a few weeks ago. Check it out for more info.

This is the Johnny Unitas Glendale Stamp. I have the set but I have had to replace one that fell victim to our cat's curiosity (and the fact that I was too lazy to put them up after I scanned them!). 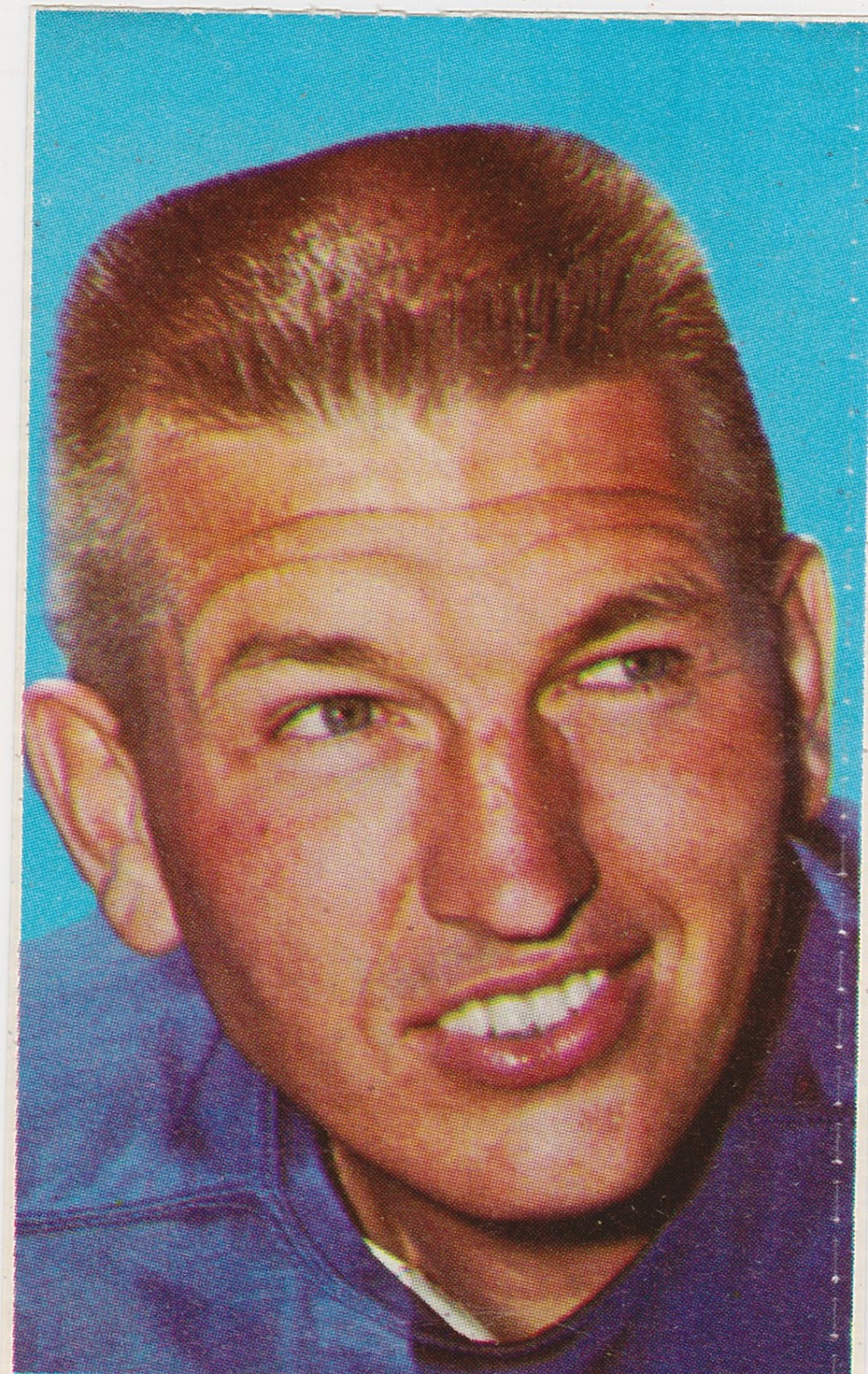 I originally grouped the '68 and '69 Colts cards in one post because I thought they were similar and that 1970 was a departure for Topps. But looking at these again I'm not so sure. But I'll stick with my original plan and the next post will feature the early 70's Colts cards.
Posted by Commishbob at 7:30 AM