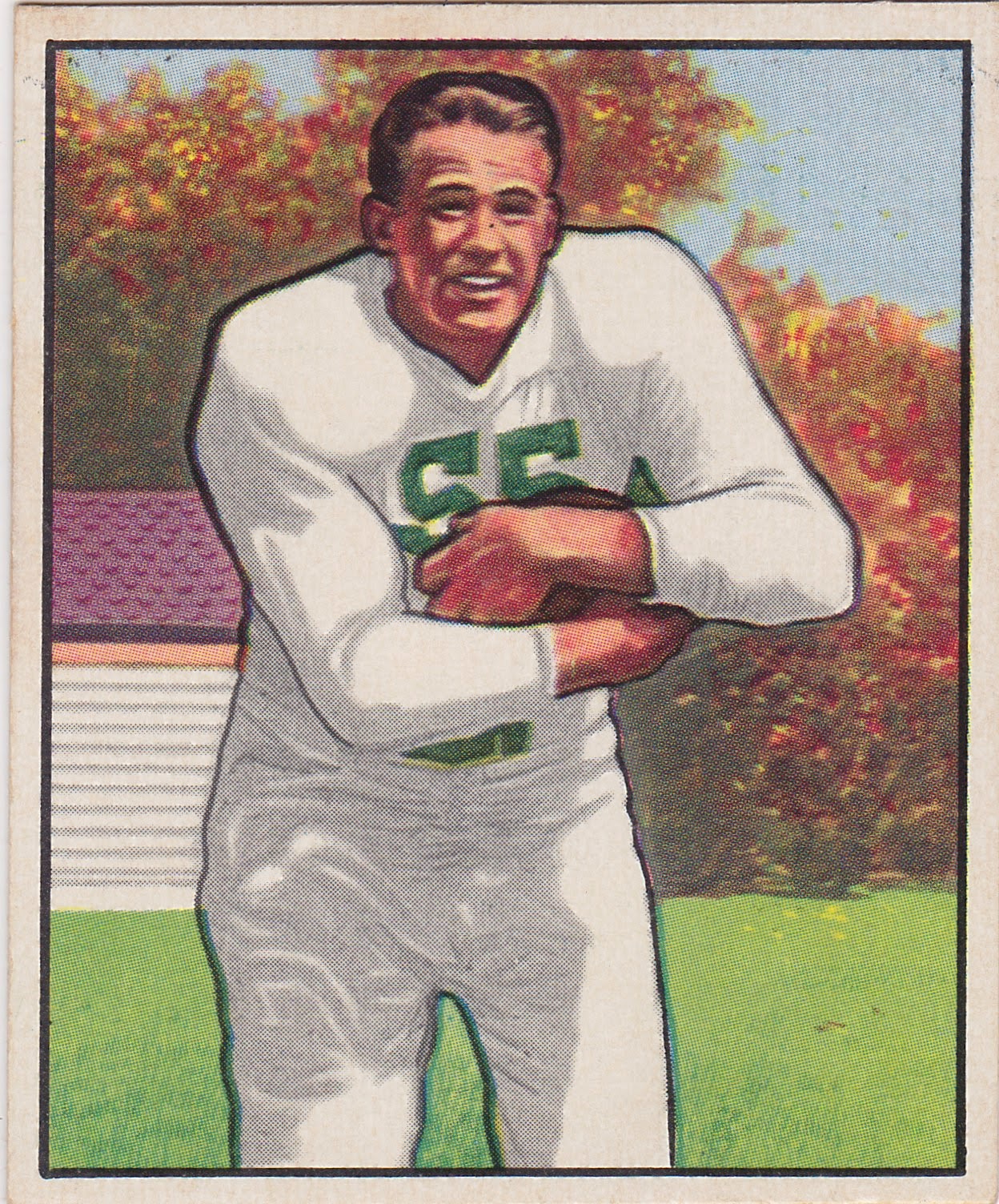 As I've worked to complete the Baltimore Colts vintage card checklist I've toyed with different ideas about presenting it here. I fully realize that football posts don't get much readership but then again if it was readership I was after I'd stick to newer baseball stuff. I've decided, after all this time, just to post what I feel like posting and have fun with it. So there ya go. My plan is to do at least two for each decade of the team's history and show the evolution of the cards. I'll scan a variety of cards within each set to give a good idea of the set's 'flavor'.

Most of the emphasis will be on the major card issues, i.e. Topps, Fleer, Bowman and Philly Gum but I will also post cards from other sets, Kelloggs for example and try to show the various inserts that came with the base cards. Most of those inserts are Topps products in the 1970s.

The Colts can trace their history back quite a way. The franchise was part of the All American Football Conference which formed in 1946. But due to not being able to find a stadium deal they folded up their tent before playing a game, 'moved' to Miami and played there as the Seahawks. That Miami club lasted one rocky season and relocated back to Baltimore as the 'Colts' and played in the AAFL through 1949.

The AAFC merged three teams (Colts, Browns, 49ers) into the NFL for 1950 and thus began the life of the team I grew up worshiping. The 1950 Colts are represented in the only major football set of that season, the gorgeous Bowman effort. 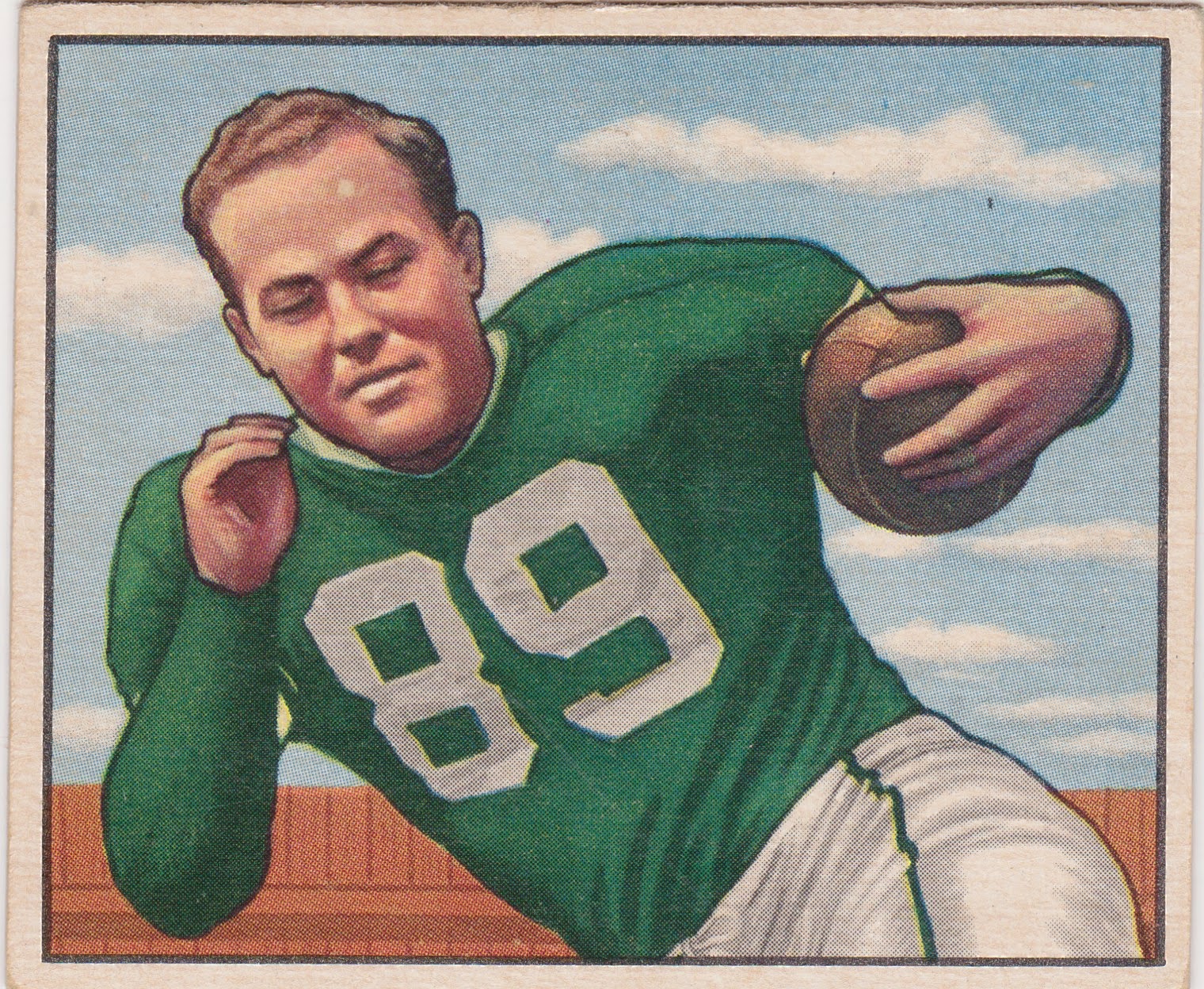 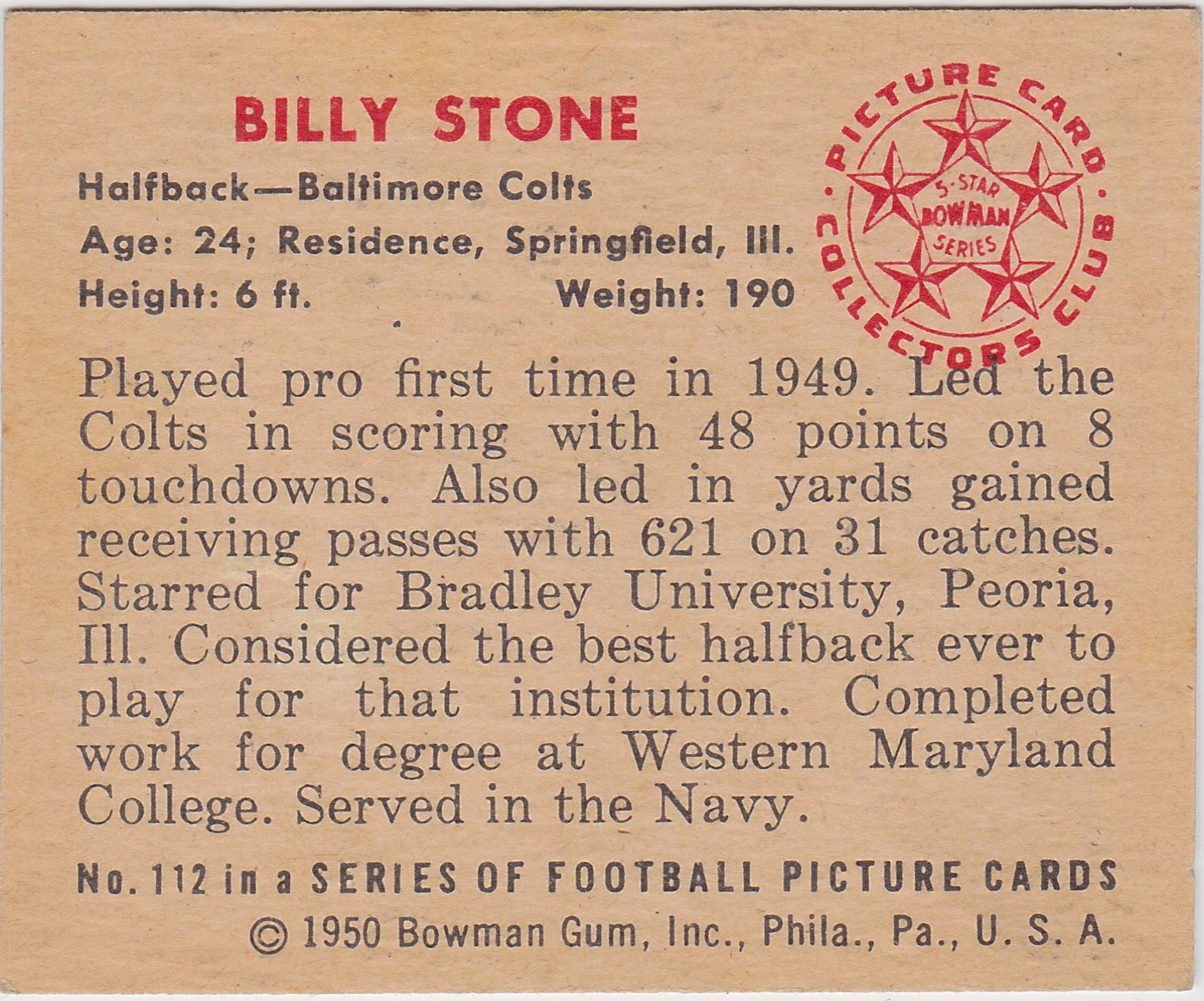 The Colts were still wearing green and white back then and the cards are the 'standard Bowman size' and feature painted photos. There is a fairly even mix of horizontal and vertical orientation among the cards. The backs were printed in blue, red and black with basic player info and a paragraph of text. The back is dominated, at least visually, by the Bowman 'Five Star Football Series' logo.

I lack two of the 11 cards in the 1950 Colts set including the Y.A. Tittle card which is considered his rookie card. It's the most expensive card out there among the 50s decade of Colts' cards other than the '57 Unitas rookie. It's going to take patience to find a reasonably priced Tittle in decent shape.

The Colts finished the 1950 season with a 1-11 mark and they were disbanded by the NFL. Two seasons of no football in Baltimore followed before the Colts re-entered the carrying the shell of the Dallas Texans franchise. 1953 is considered the first year of the long-time Colts franchise. Bowman once again produced an NFL set. That year the cards were larger, the 'standard' size matched the baseball sets of the day.

The '53 Colts inherited the colors (blue and white) and some of the players of the defunct Dallas Texans franchise. 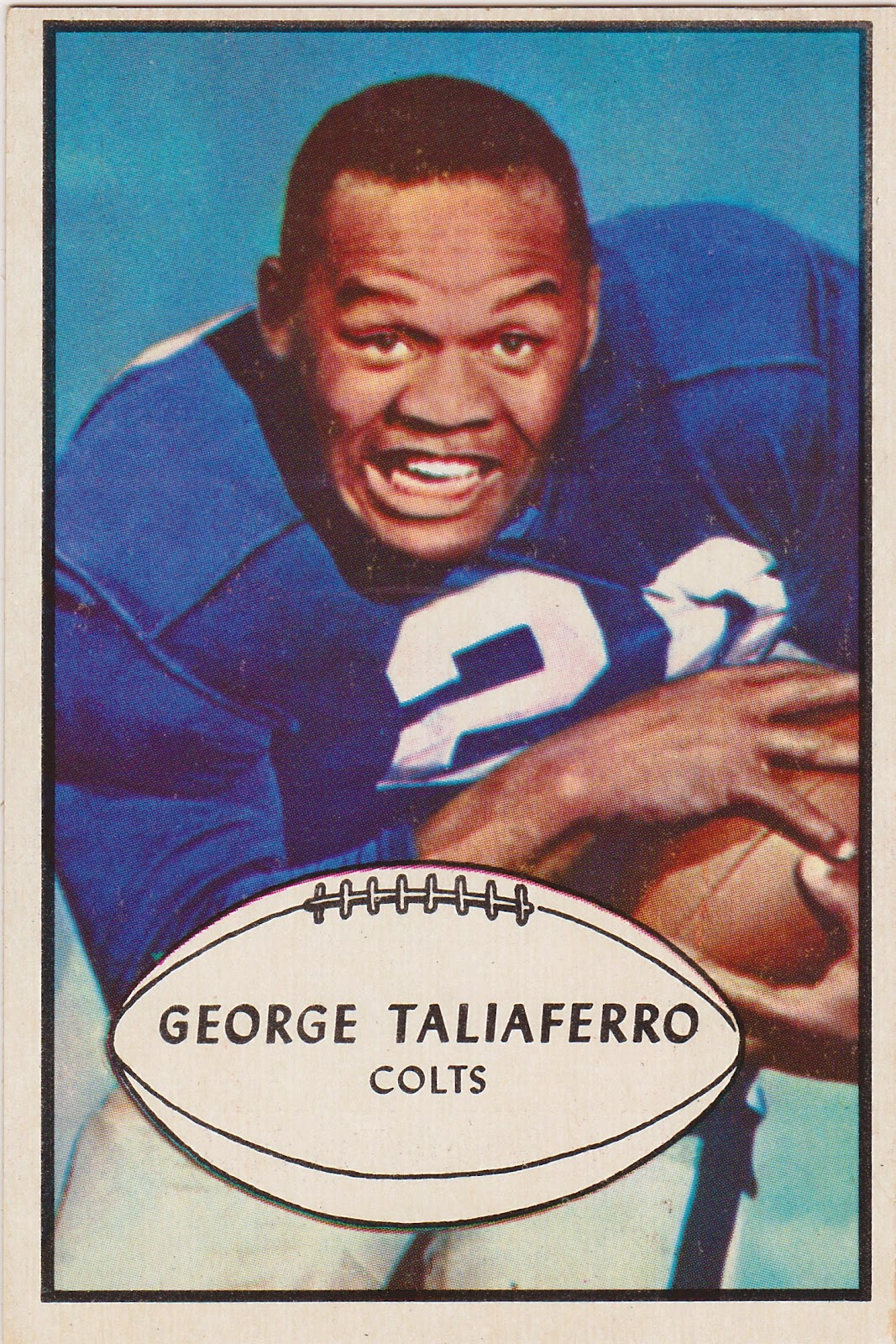 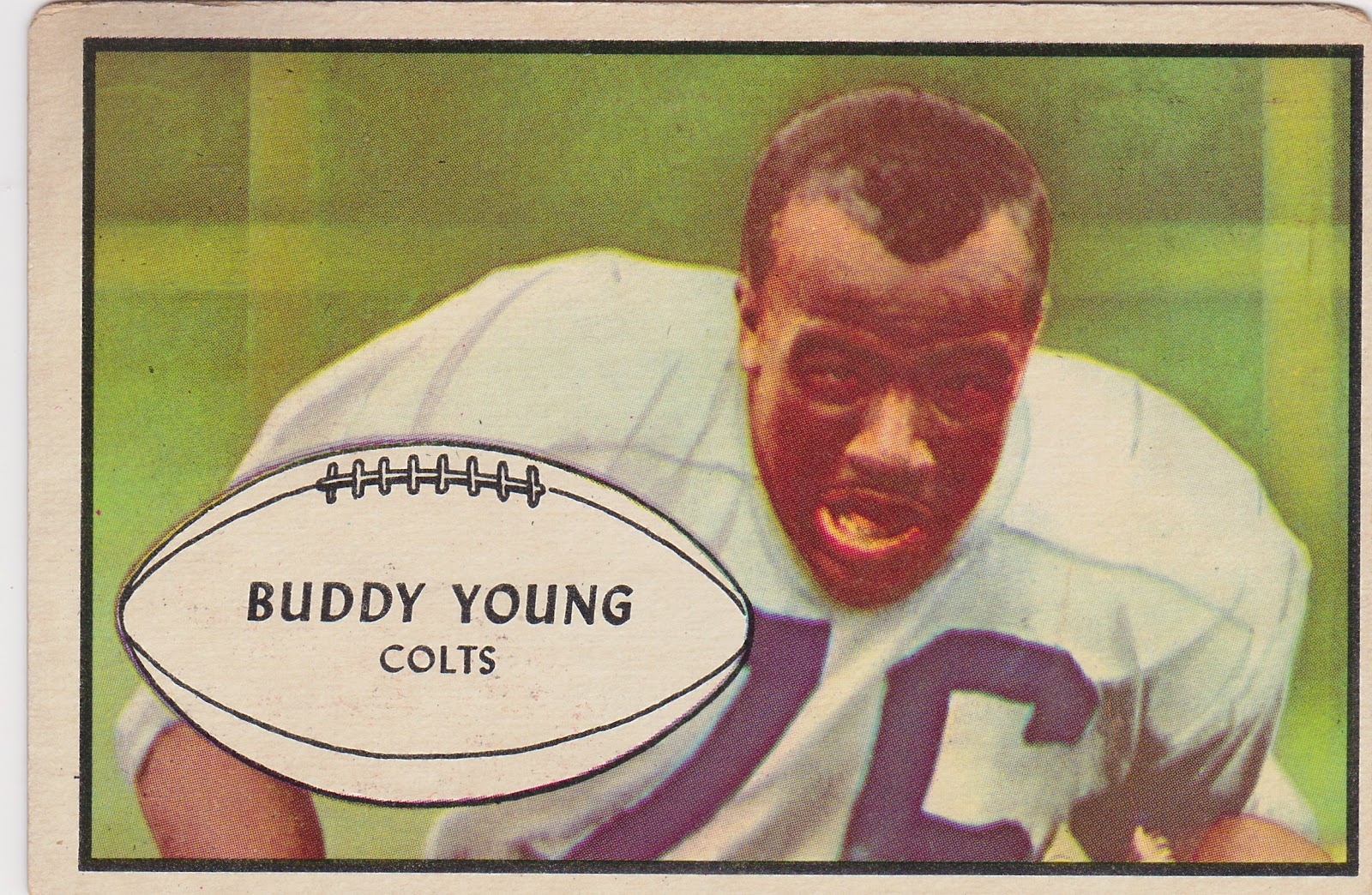 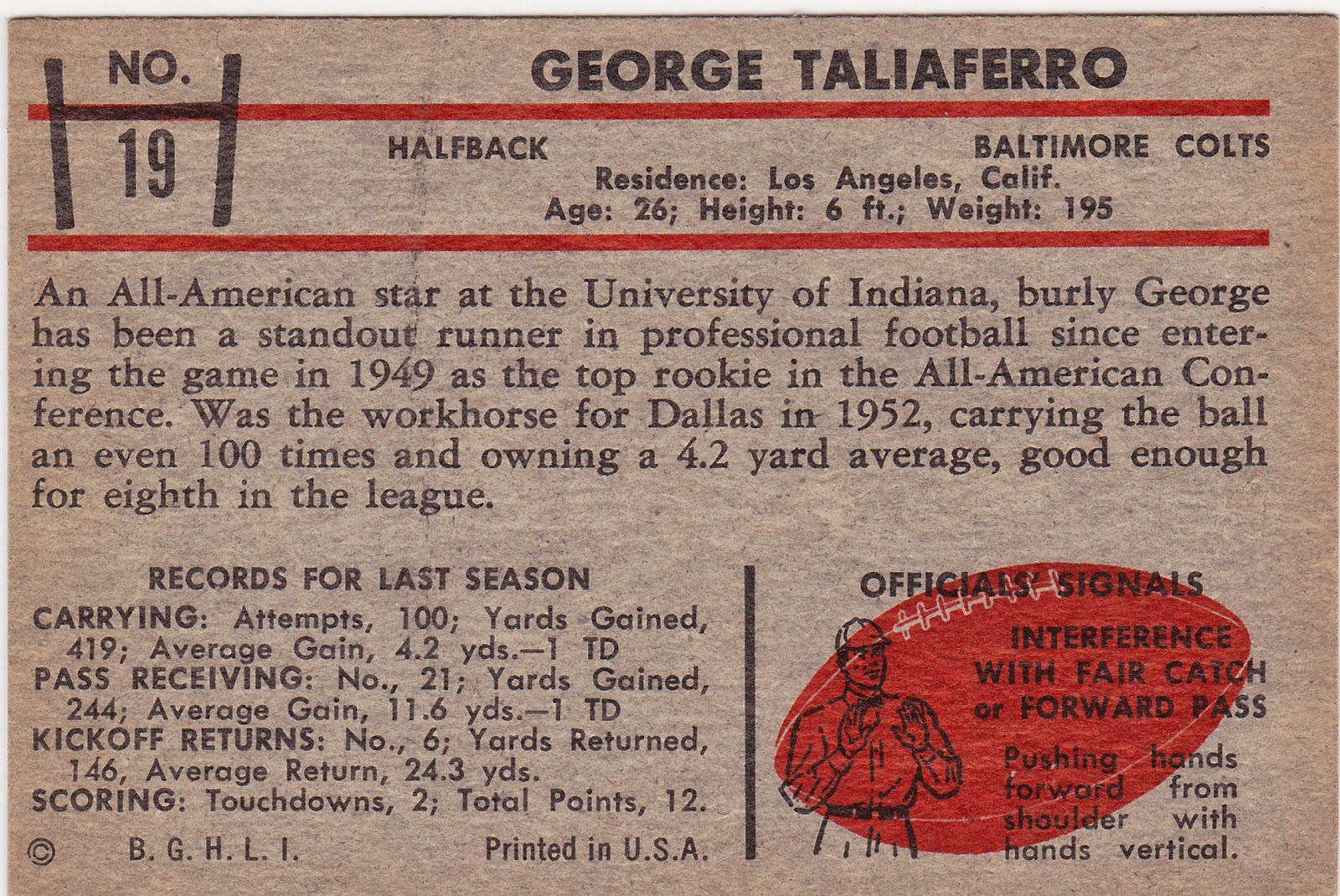 There are only six Colts in the 96 card Bowman set of 1953. Like the 1950 set there is an assortment of horizontal and vertical cards. The big white football with name and team dominates each card. The backs, printed in red and black feature name, card # and vitals across the top. Below that you'll find two of  three elements depending on the players position. Backs and ends have 'Records for last season' and an 'Officials Signals' cartoon. Lineman have the Officials Signals and a Football Quiz. 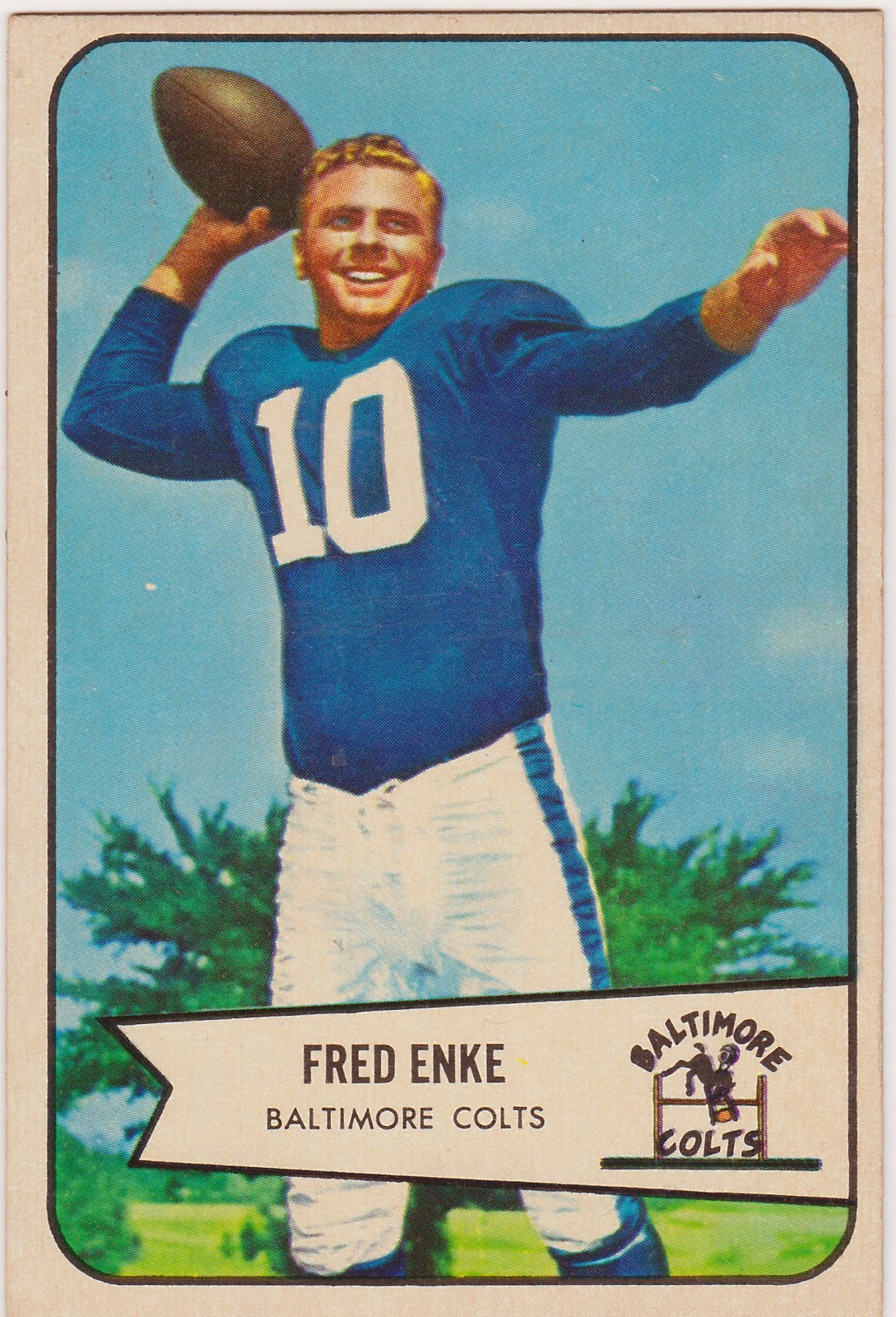 I see the '54 set as a step up from the previous season if for no other reason than the pennant which replaced the football. I'm a sucker for the old 'Colt over the crossbar' logo and it makes it's first card appearance with the '54 set. 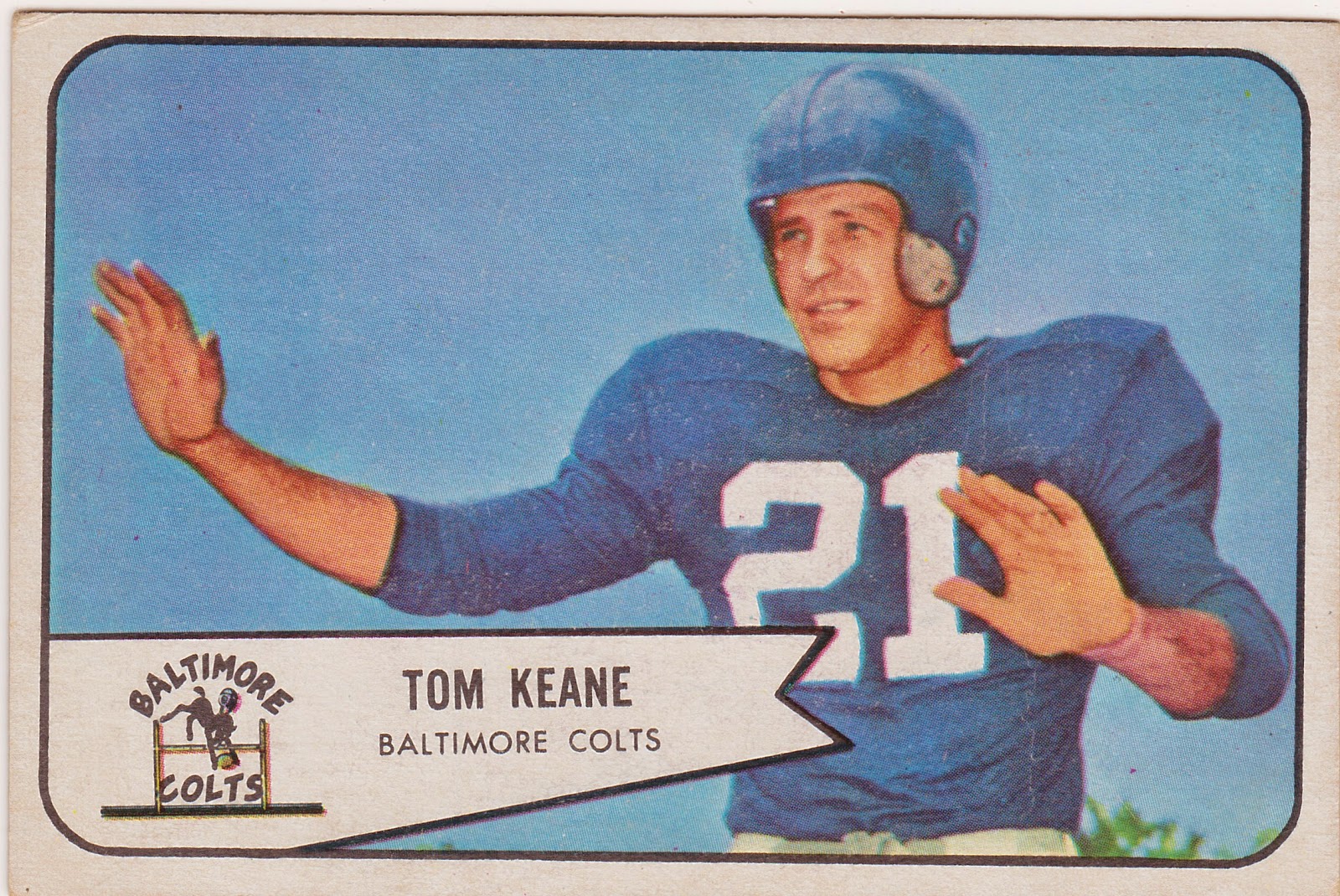 
Most of the 11 Colts in the set are shown in posed action shots. One notable exception is Buddy Young whose portrait will be reused in the '55 set. 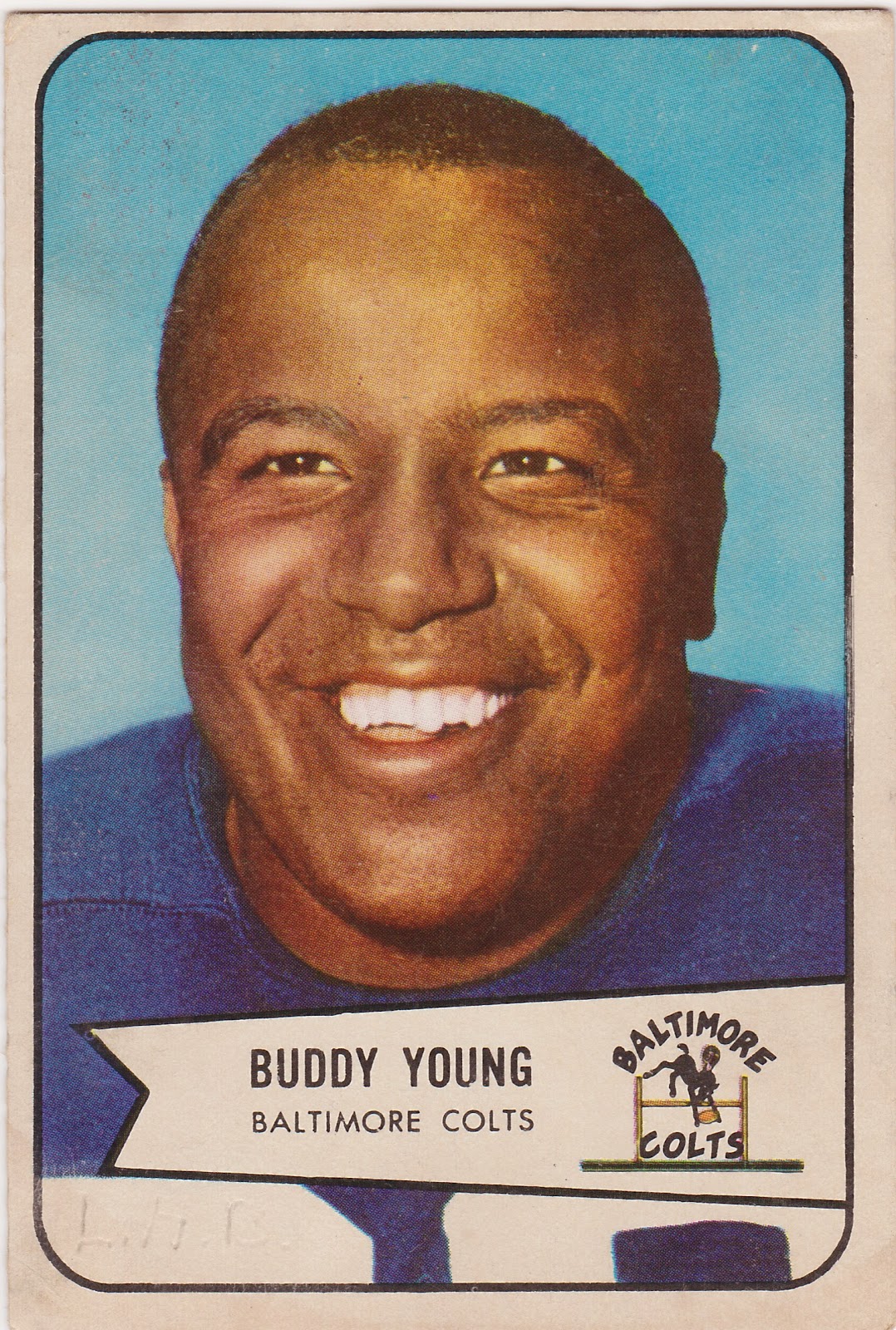 The red and black backs of the cards are very similar to the '53 cards. The elements are nearly identical but they have been rearranged. 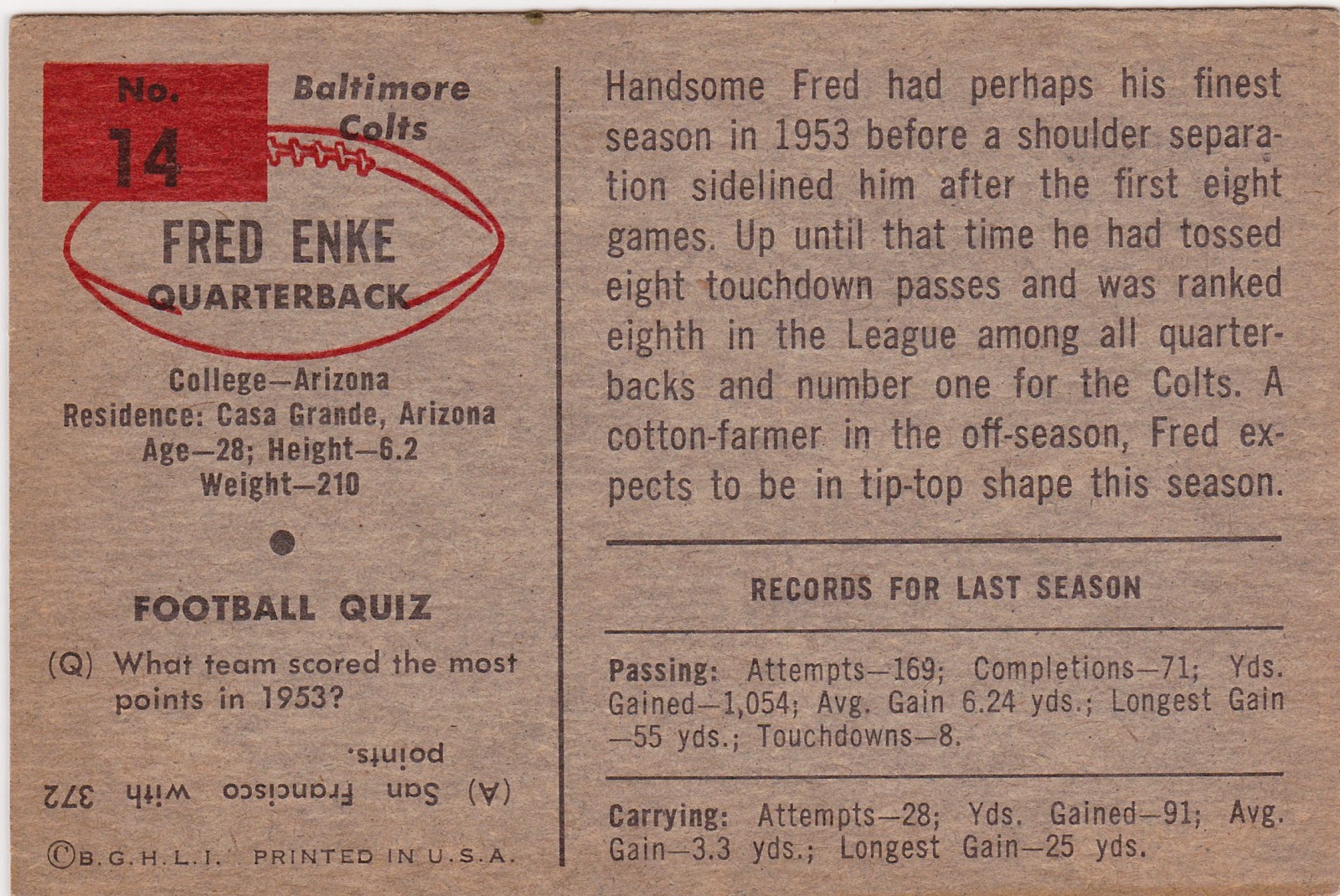 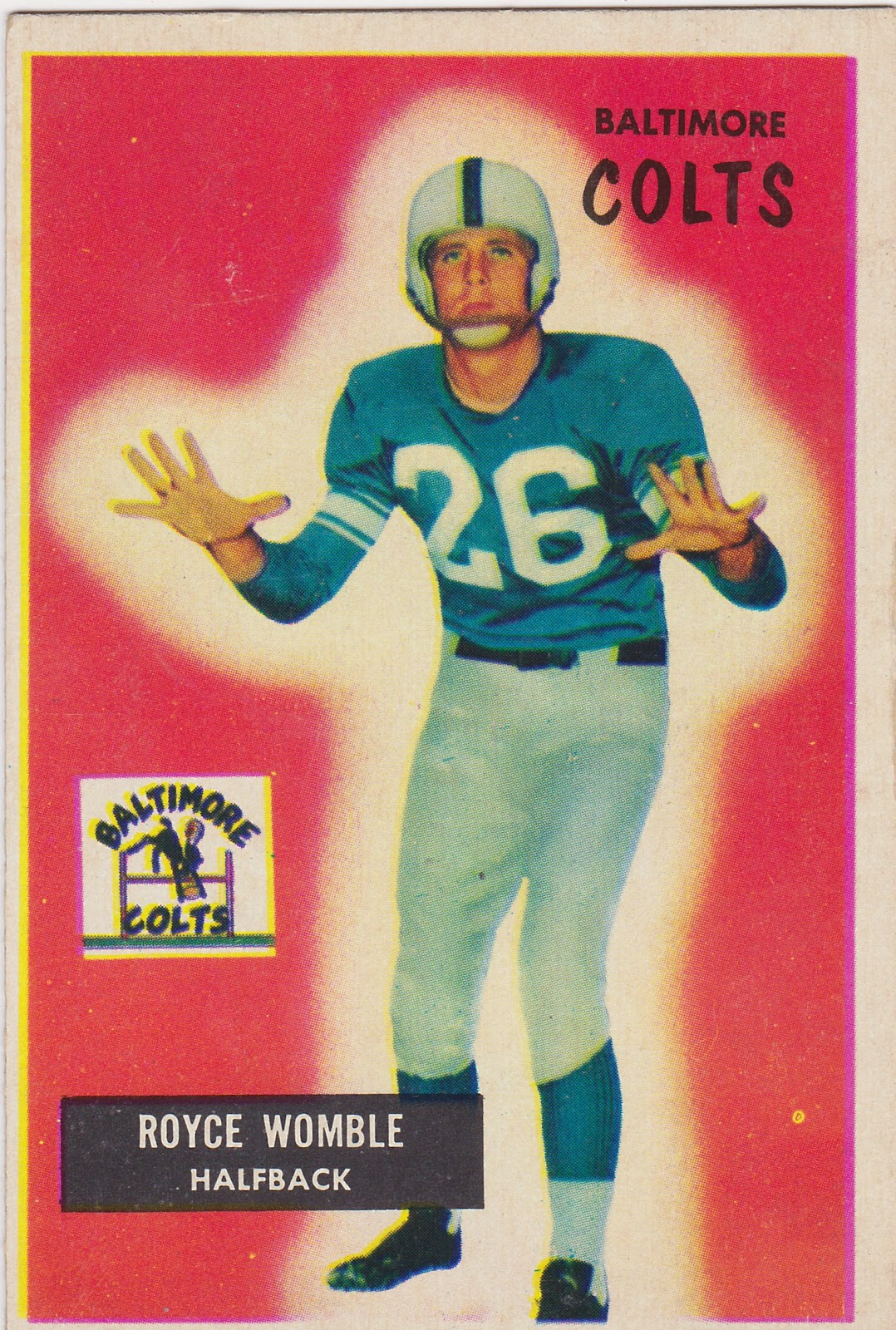 In the final year of Bowman football (they were bought out by Topps for 1956) they departed from the two previous issues. There are ten Colts in the set and they are shown with a 'halo effect' on a background that can only be described as red/pink/orange. 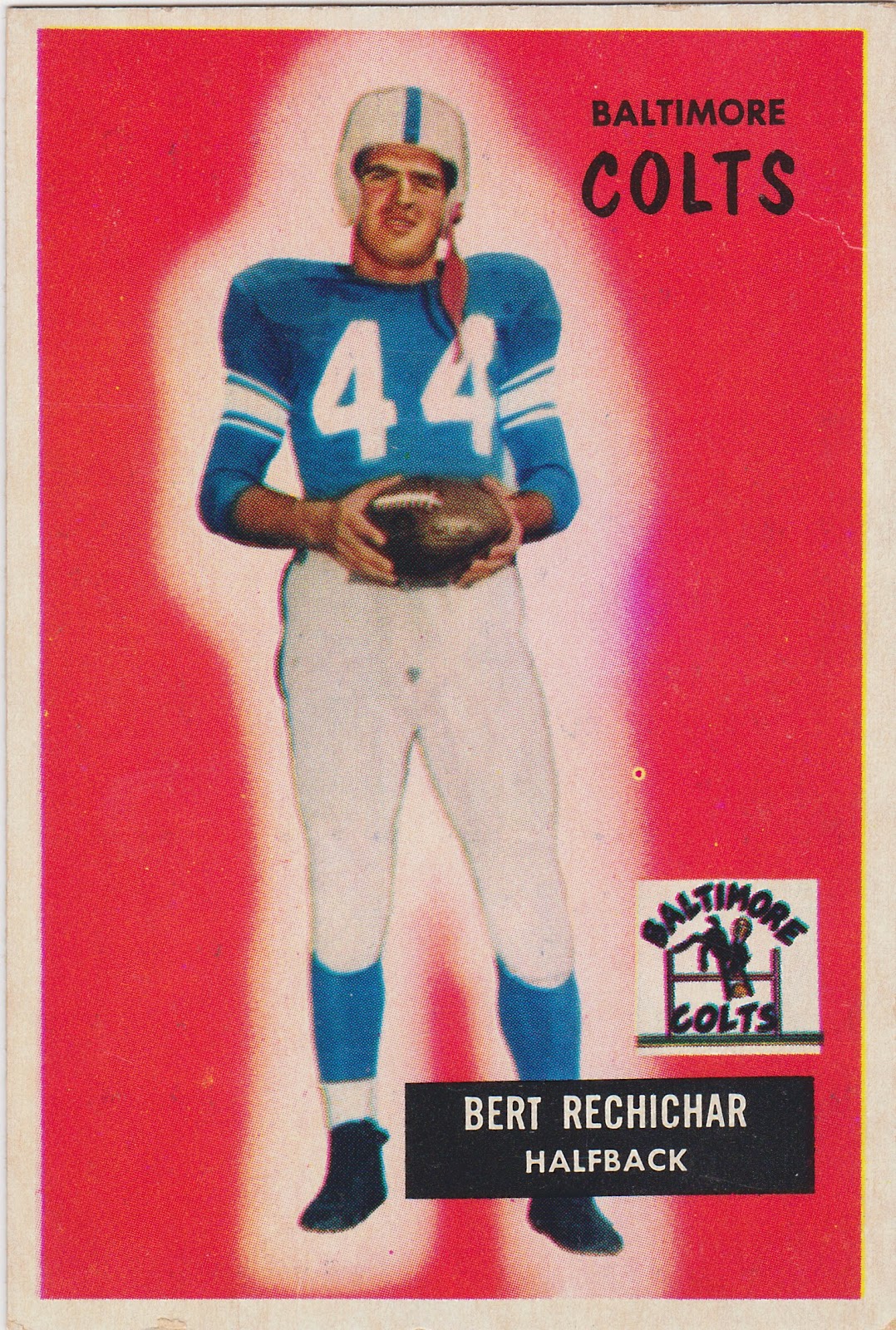 Most of the cards are posed action shots but again Buddy Young had the close-up portrait. The background on Young's card isn't as vibrant as the others and his photo is 'washed out' a bit. I thought it was just my copy but it's the same on every one I find to some extent. 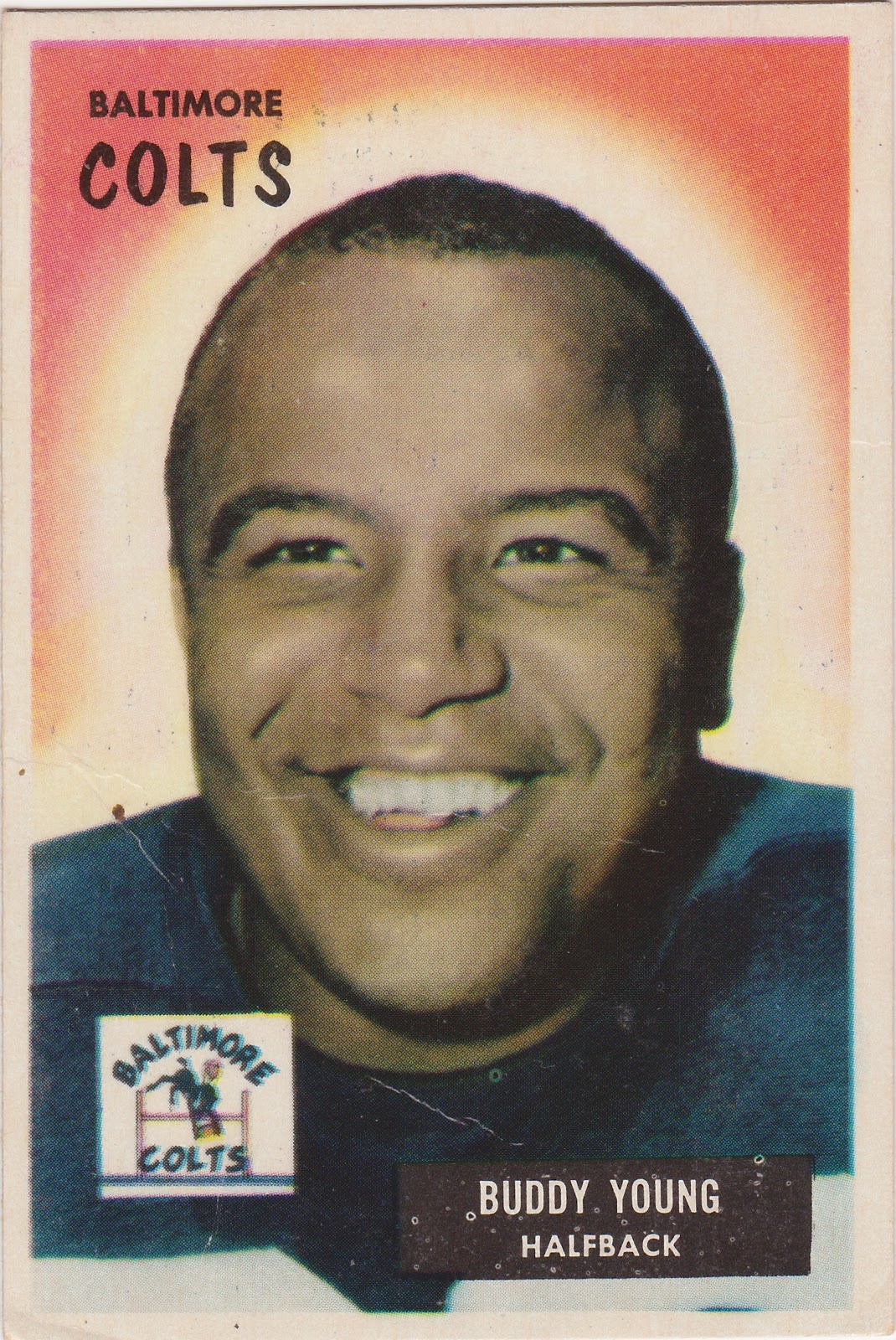 
In their last set Bowman changes the orientation of the card backs to horizontal. But other than that the backs are very similar. Colors and elements are about the same as the previous three years. 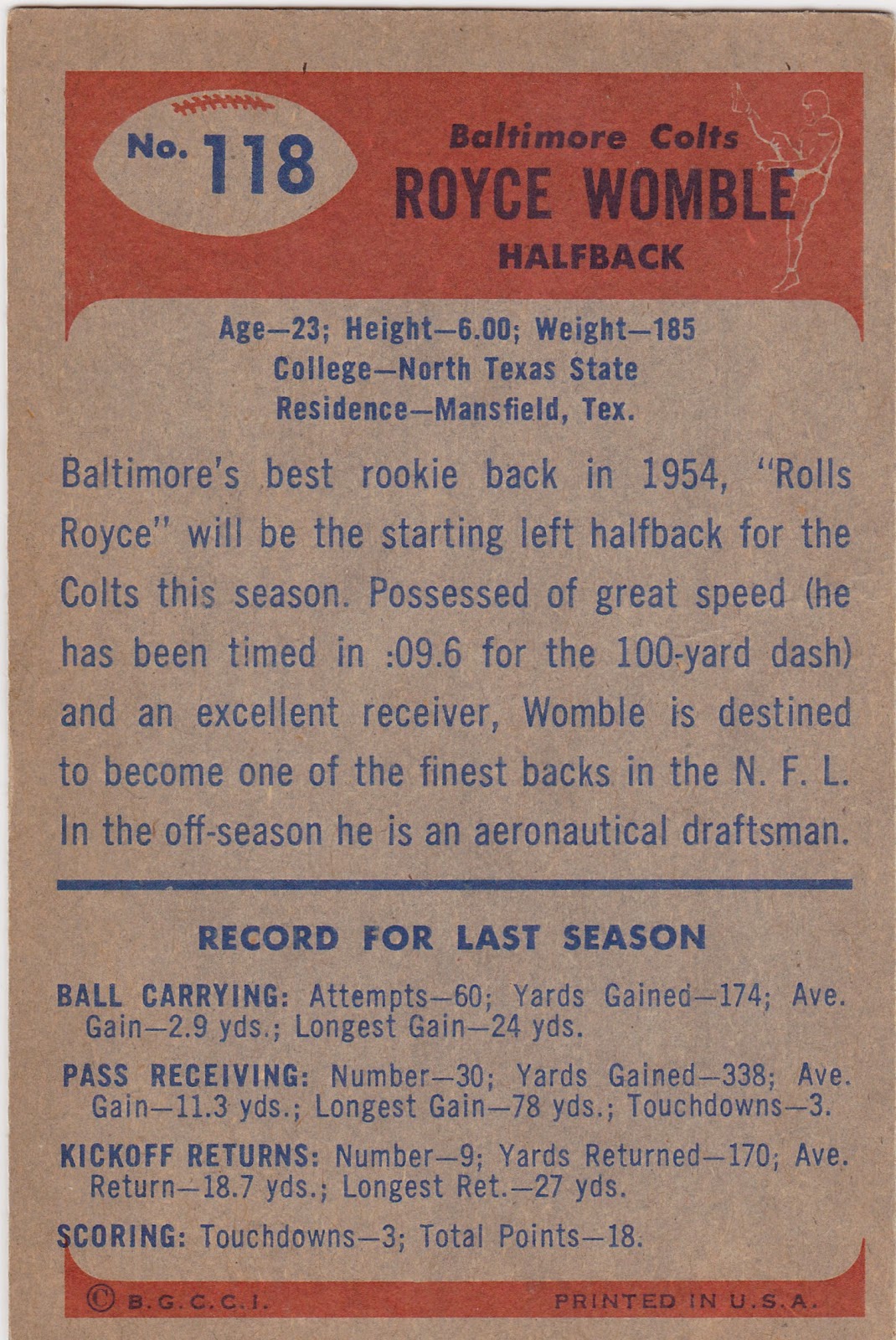 Topps took over production of the NFL licensed cards in 1956 and their first set is very reminiscent of Bowman's last one. That Topps '56 set will kick off the next post in this little series.