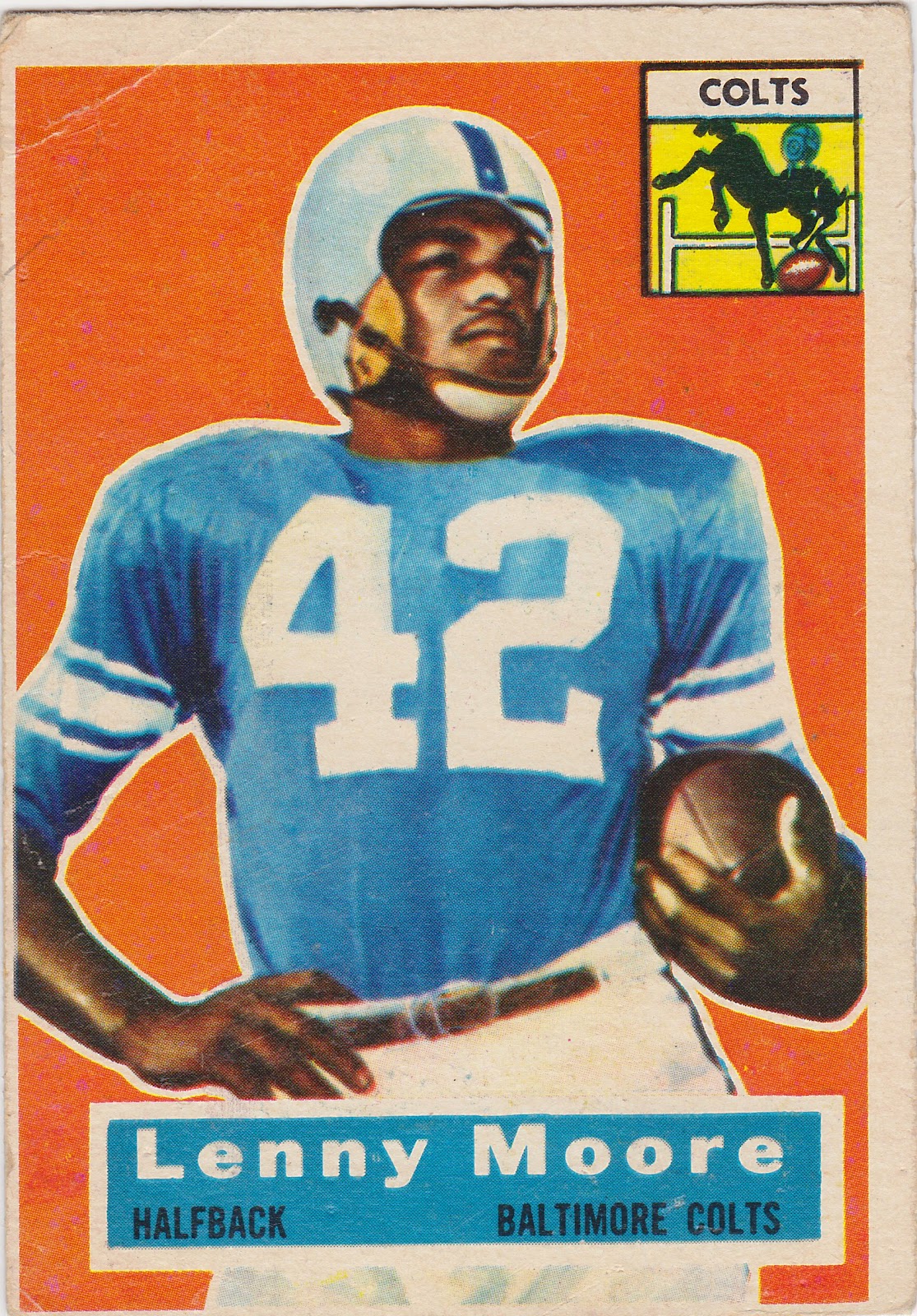 1956 saw Topps take over Bowman and this marks the first year of their football set.

The first Topps effort strongly resembles the final Bowman one. The posed shots are set against a red/orange background. The 'colt over the crossbar' logo returns but it's more of a closeup than a full logo. It appears that each team's cards had a consistent color and it seems that it's a coincidence that the Colts had the same background color two years in a row. There are ten Colts cards in the 120 card set including the Colts team card and I've acquired all ten. This season saw the first team cards produced for football. The first checklists are also part of the '56 Topps set and at the prices I've seen I'm glad they are not on my wantlist. 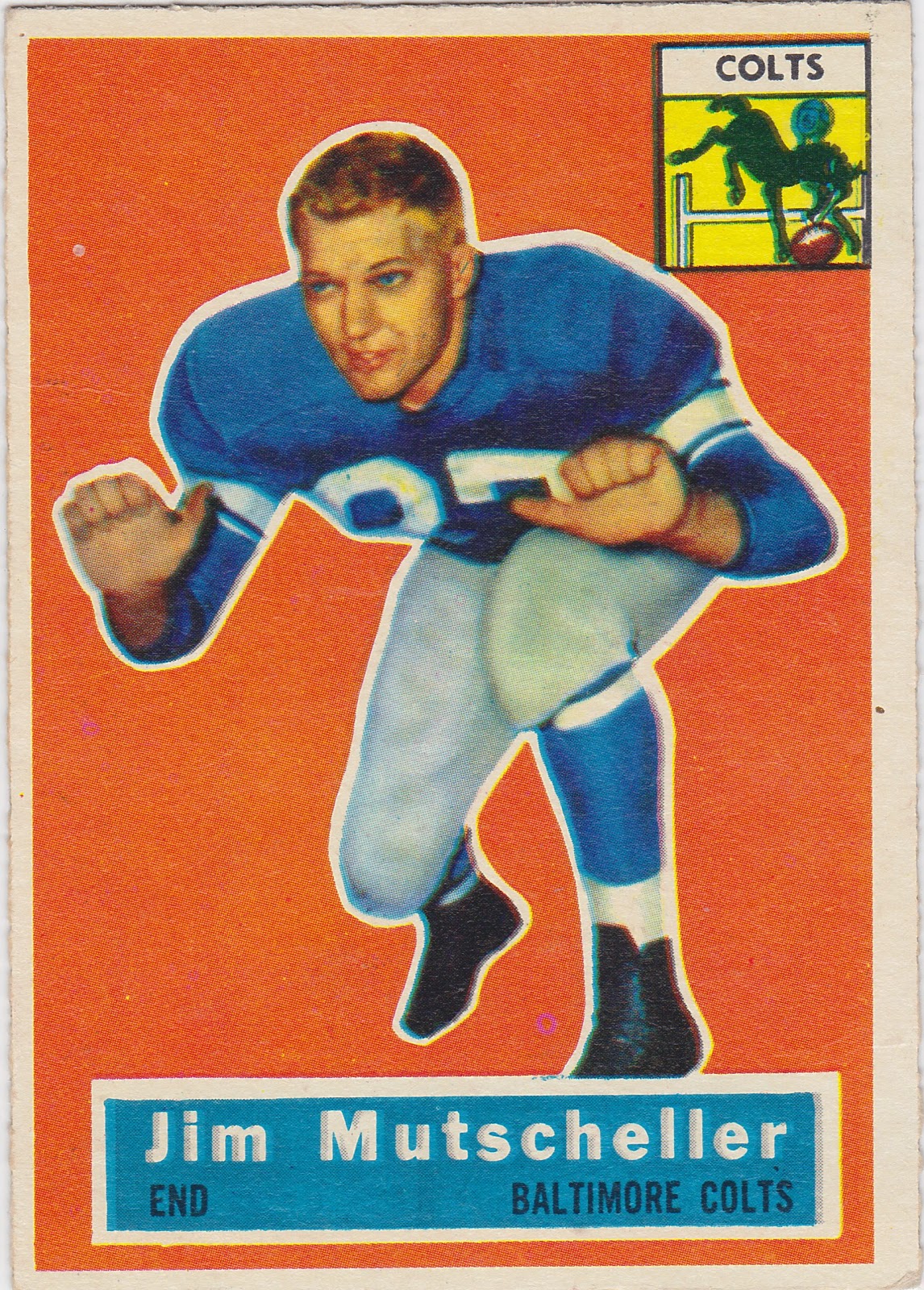 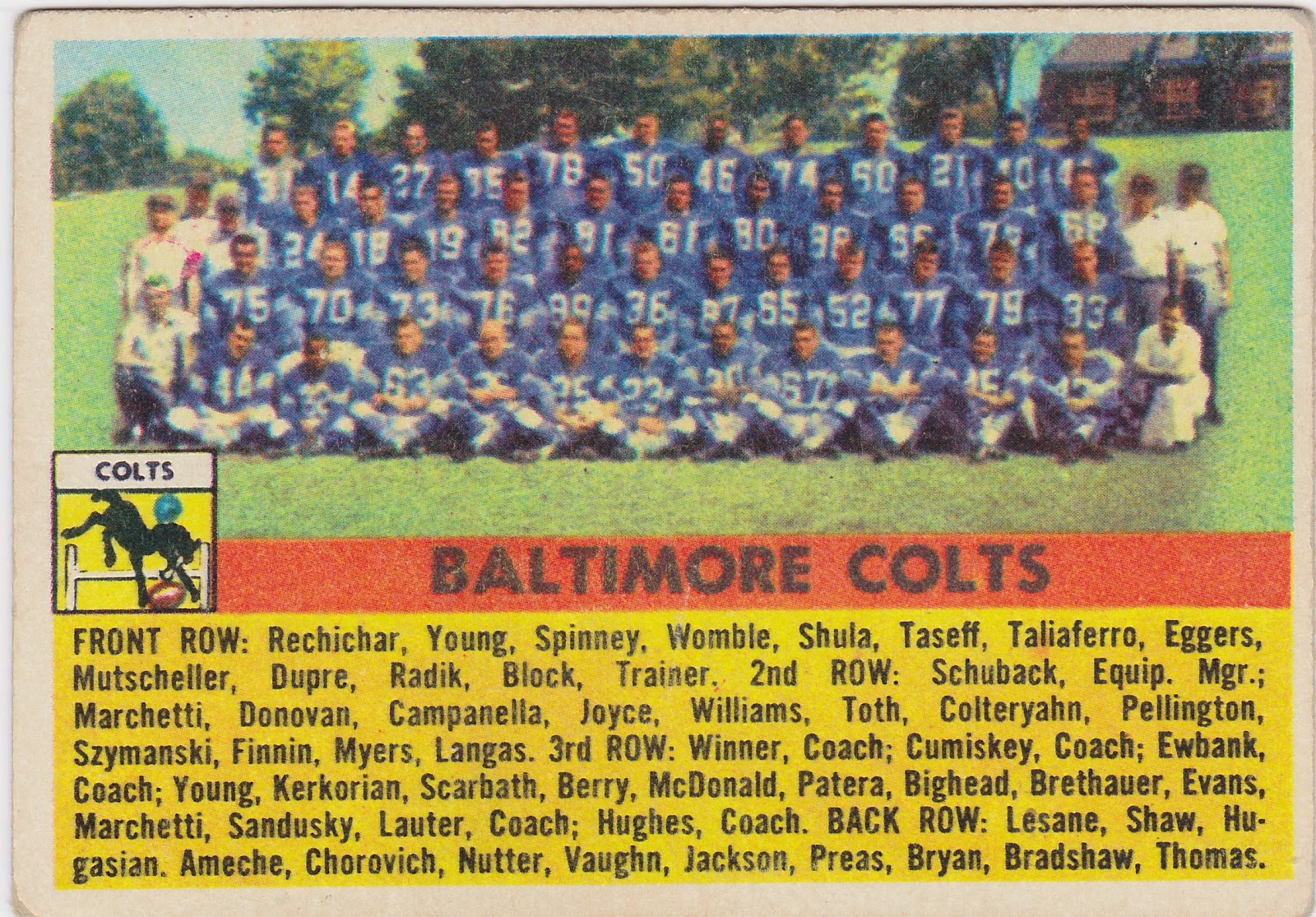 The backs didn't change much from the previous season. They are again red and black but now contain vitals, a blurb, simple stat line and a cartoon. 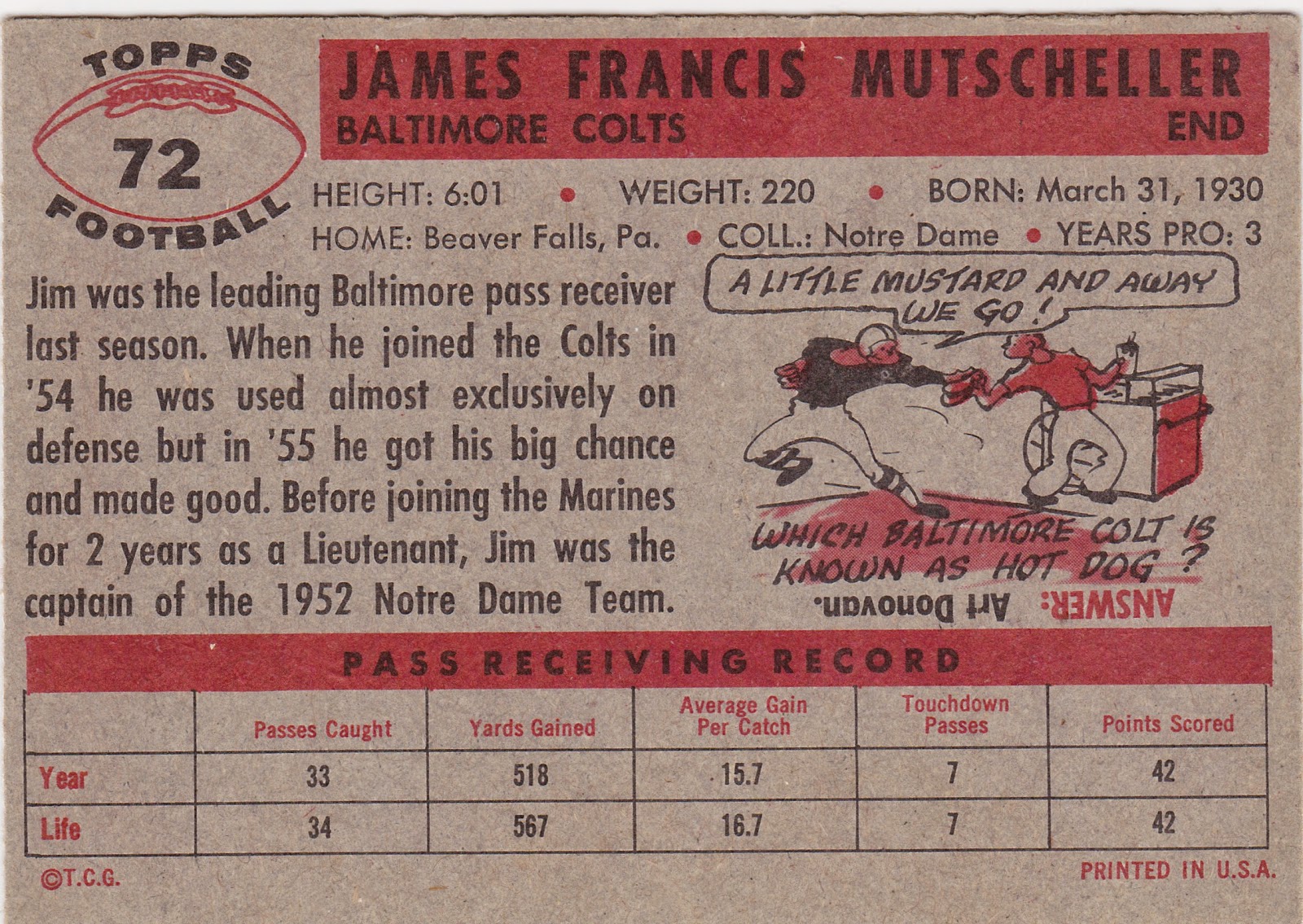 The team card has a write-up and a listing of team record holders. 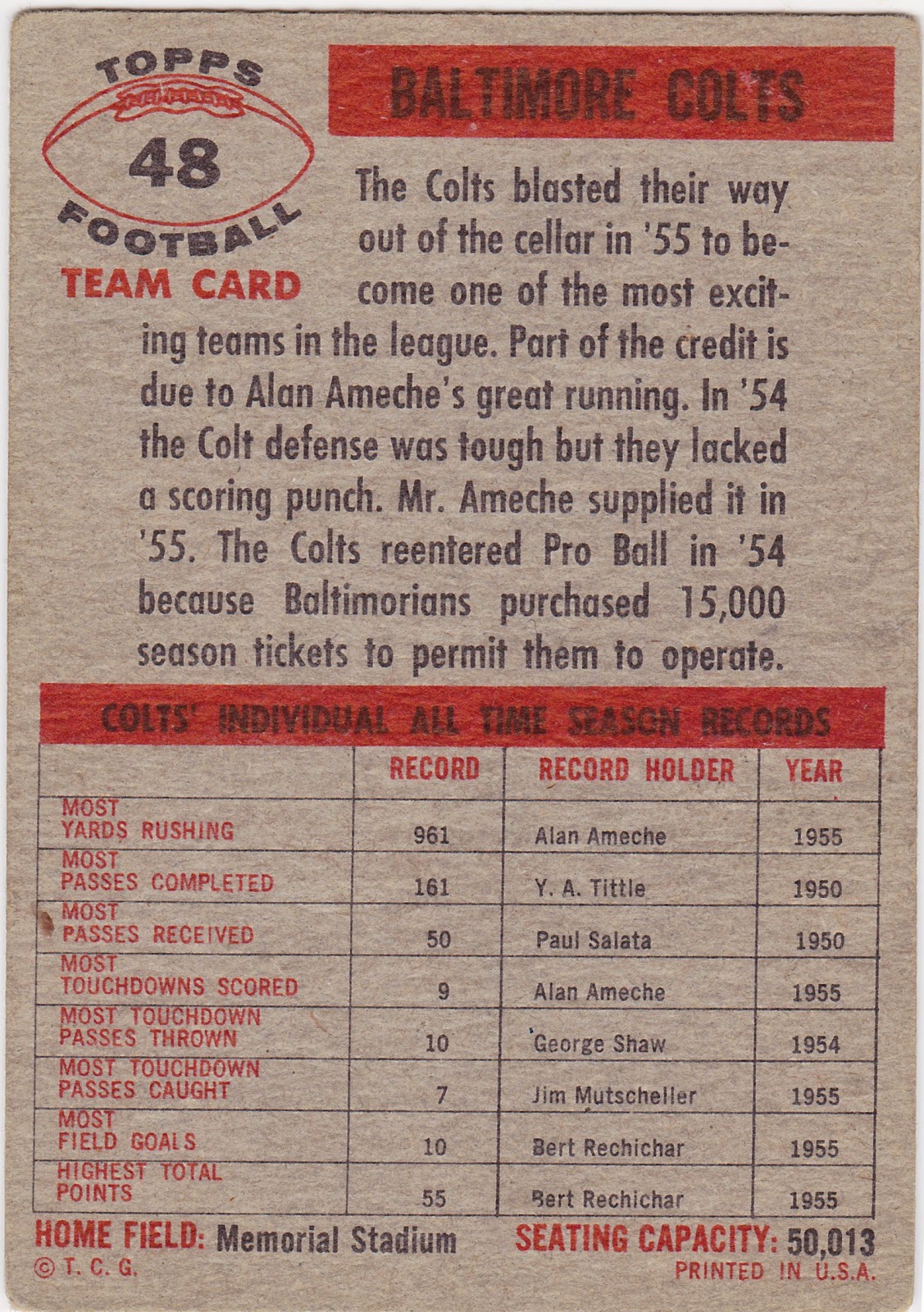 Lenny Moore's card is his rookie and it's the most expensive of the team set but it's not unreasonable in decent shape. Mine is way off-center and has a crease but it's mighty fine nonetheless. I love the classic pose he's striking on his card. The back is dominated by text as he obviously has no previous NFL stats. 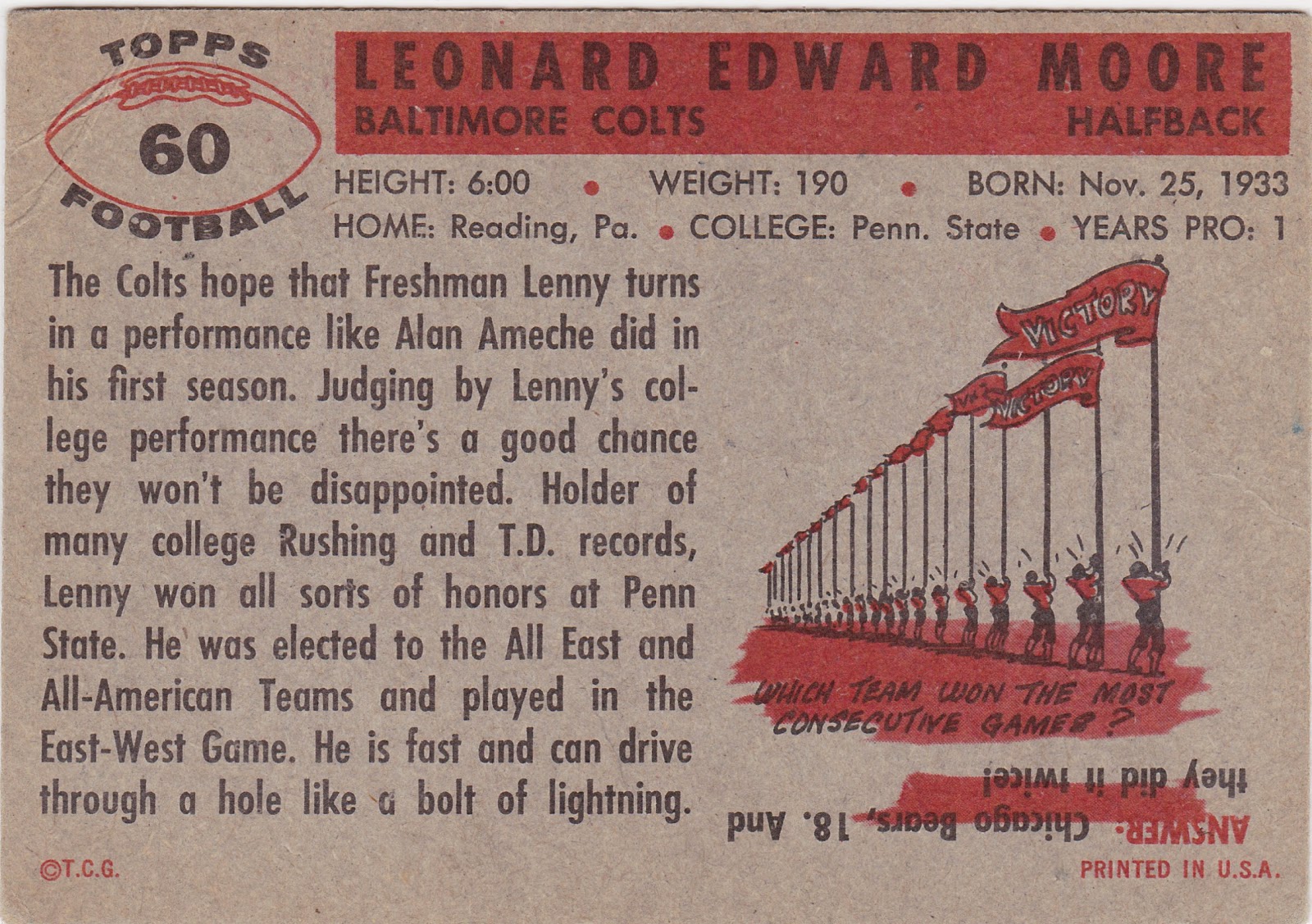 In 1957 Topps made a great leap away from the Bowman 'template' with a set of horizontal cards featuring two shots of each player, a portrait and a posed action photo. Each team had their own combination of colors. The Colts cards were all orange and green with the players names in a box done in either black or white on green. Player positions and the team nickname were black on white. No team logos were used. This was the first year that Topps issued cards in what we have come to know as the 'standard' size.

There are 13 Colts in the set and I have completed it. The cards are not terribly pricey except for the John Unitas and Ray Berry rookie cards. I've bought, sold and re-bought the Unitas rookie. I picked up a Berry card at the last card show I attended. It has a crease the length of the white strip between the two photos and wouldn't get much of a grade but in a binder page the crease isn't all that noticible and I knew I'd never find another copy for $20 in usable condition.

Billy Vessels whose picture is reused from the '56 set, was no longer active in 1957. He had been a Heisman winning college star at Oklahoma who played in Canada and served in the Army before his one NFL season. 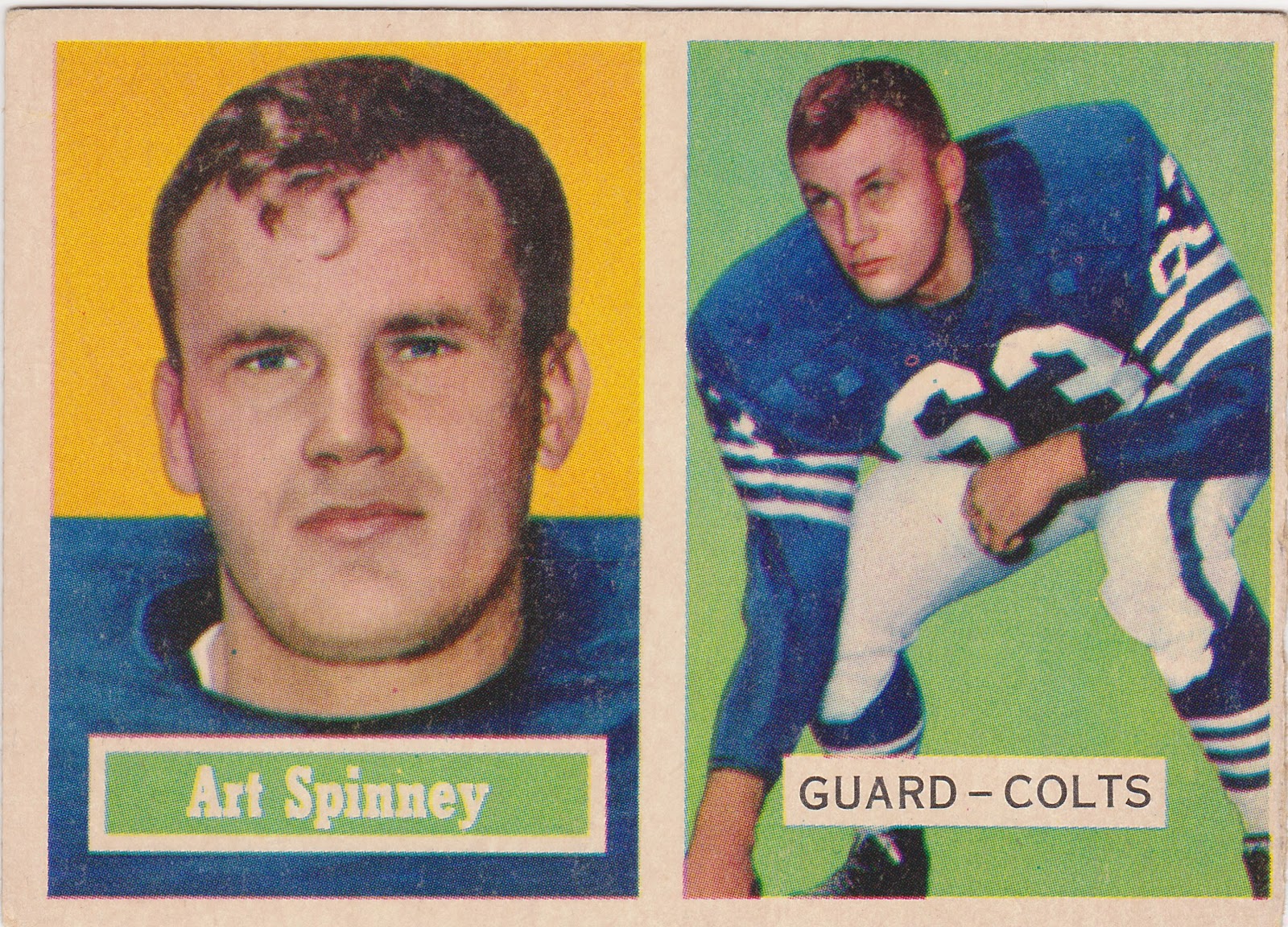 This Spinney card is faded to the point his background appears to be yellow, but the card is actually orange in better conditioned copies. Like the Marchetti card below my scanner did it no favors. They both look much better in hand than to do in these scans. 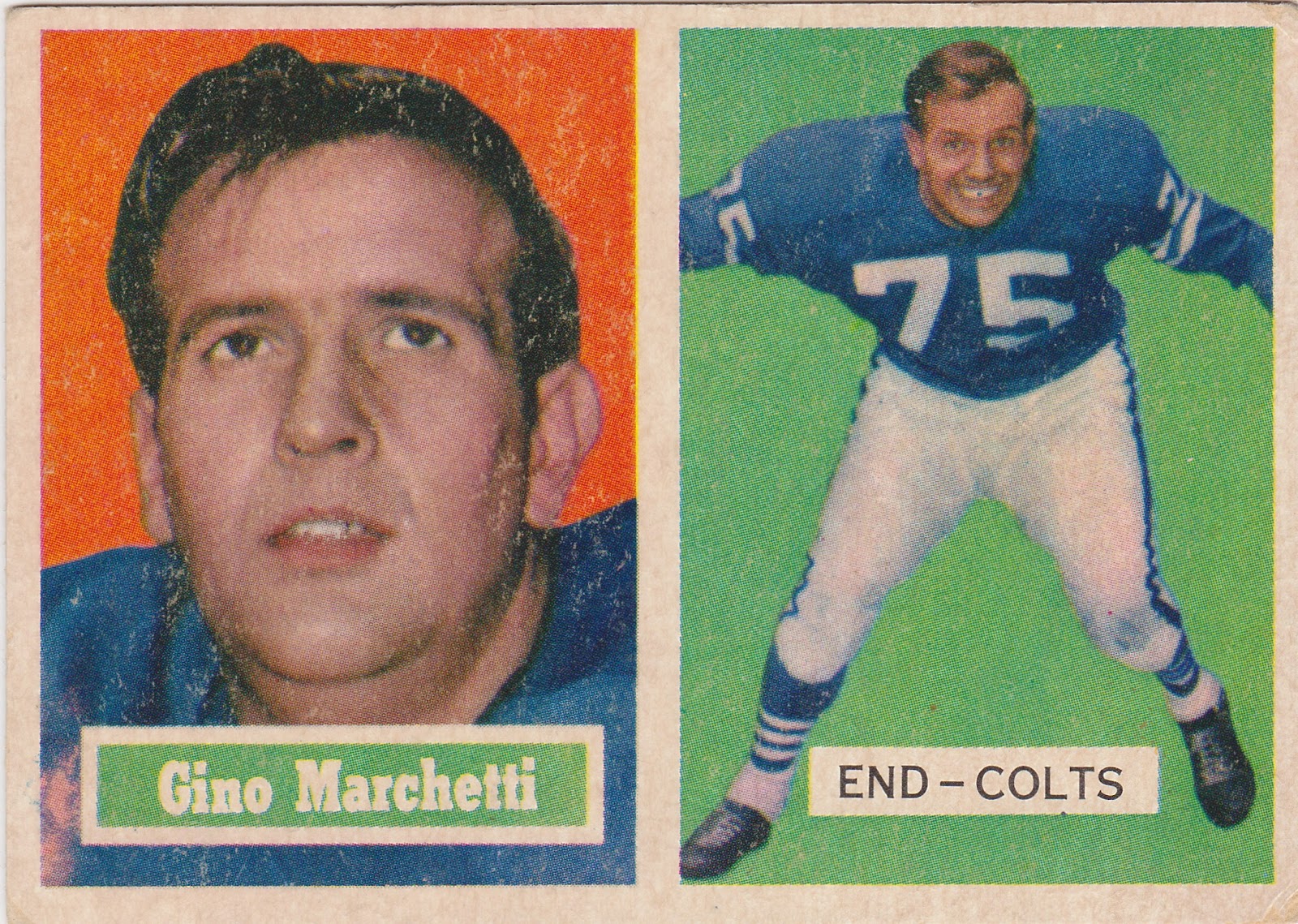 Topps didn't revise the backs as much as they did the fronts from prior years. The colors remained the same. In a layout that follows the front design there are sis-by-side sections with the left containing vitals, a paragraph blurb and, for skill players, stats. The right side has two cartoons. 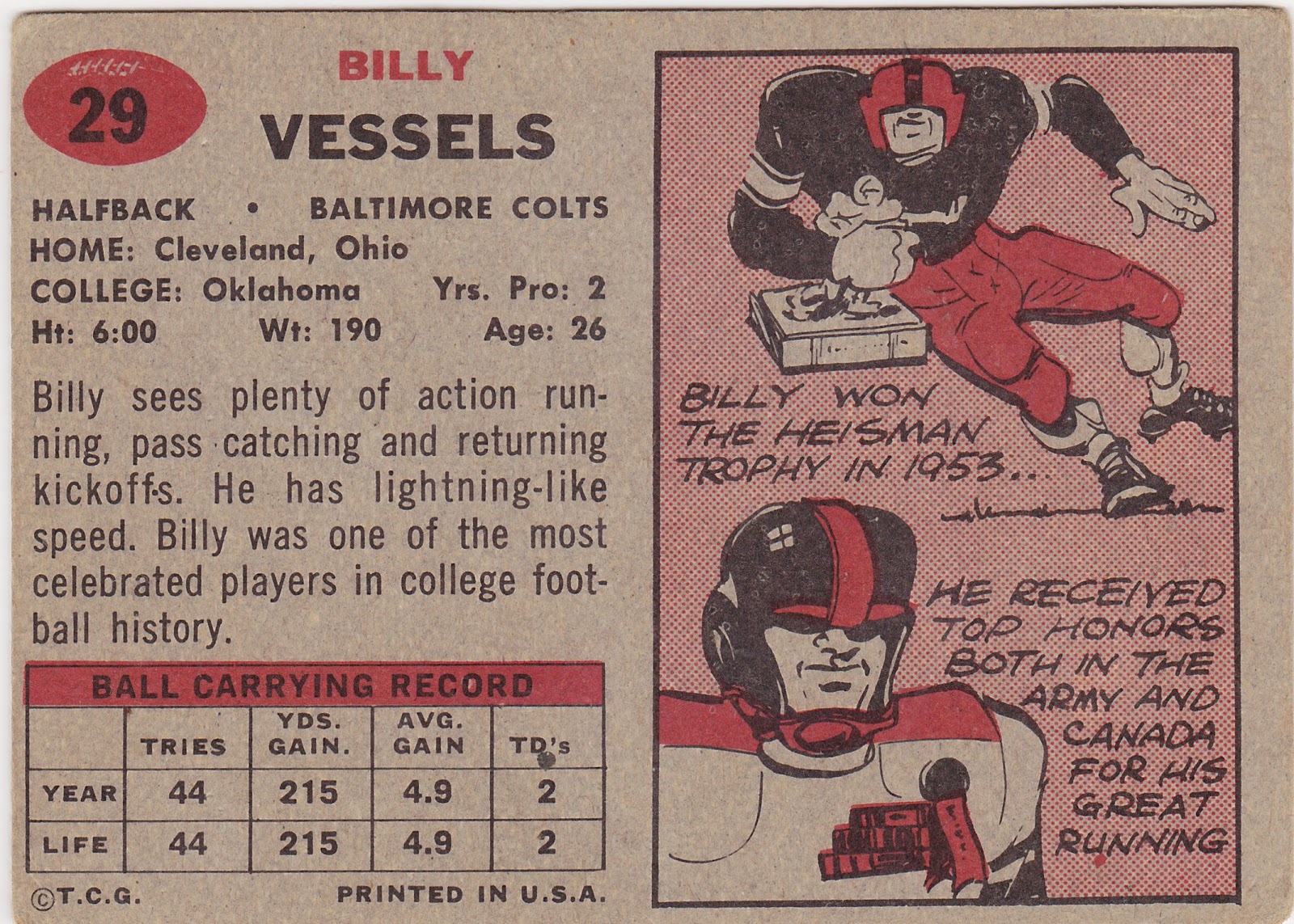 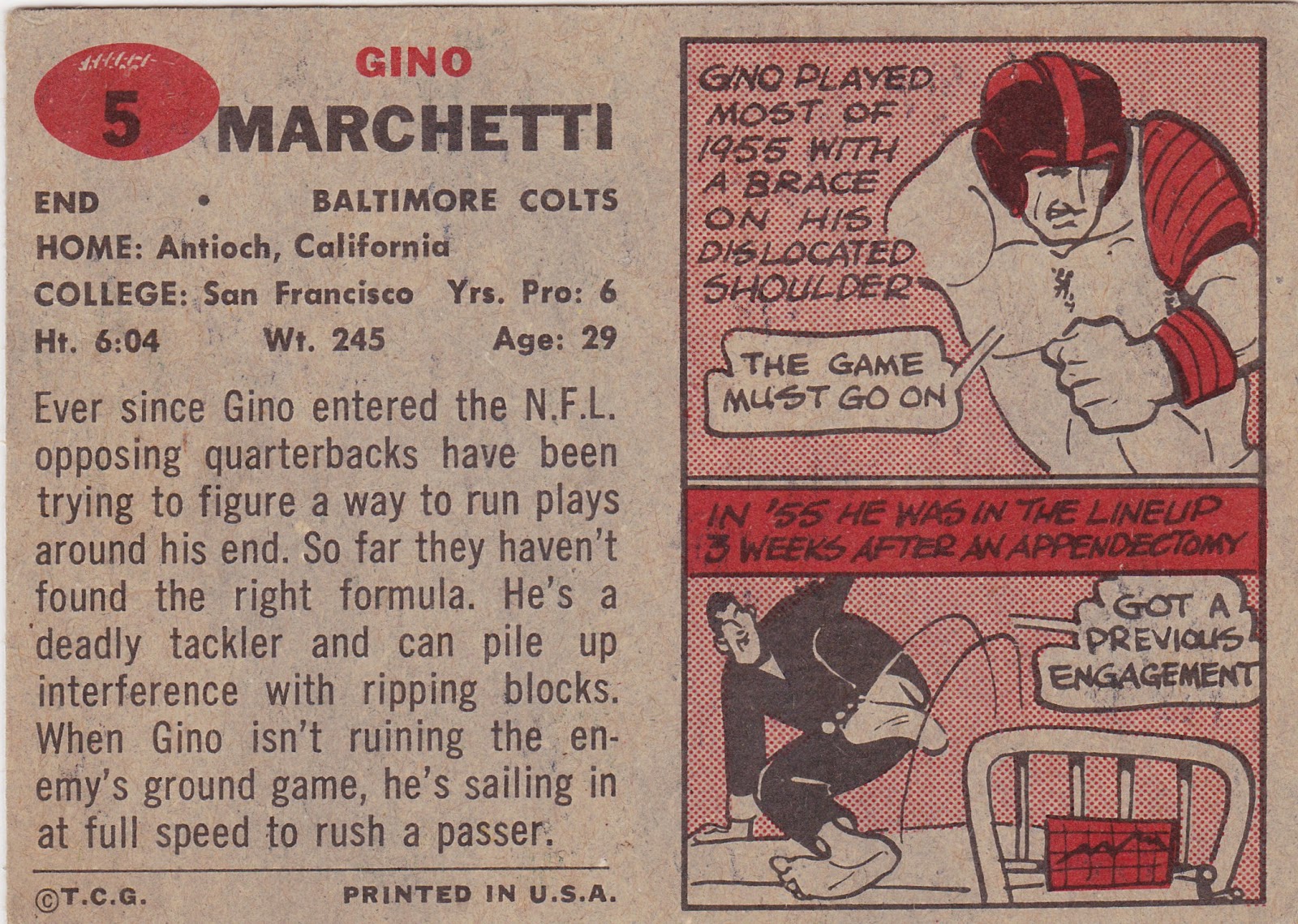 Topps included checklist cards in the set but team cards took a year off. Following the breathrough 1957 set Topps issued football sets the next two years that foreshadowed the following spring's baseball issue.

There are ten Colts players in the '58 set plus the team card and I have completed it. Eight of the players cards are framed with orange while the clubs two running backs, L.G. Dupree (yellow) and Lenny Moore (red) are exceptions to that rule. Most of the players are shown in posed action while Moore and DB Milt Davis have portraits.

As far as prices go the Unitas card, as expected, tops the list. In fact the Unitas card is the most costly card to acquire in any upcoming team set until you get to a handful of 1972 high numbers. 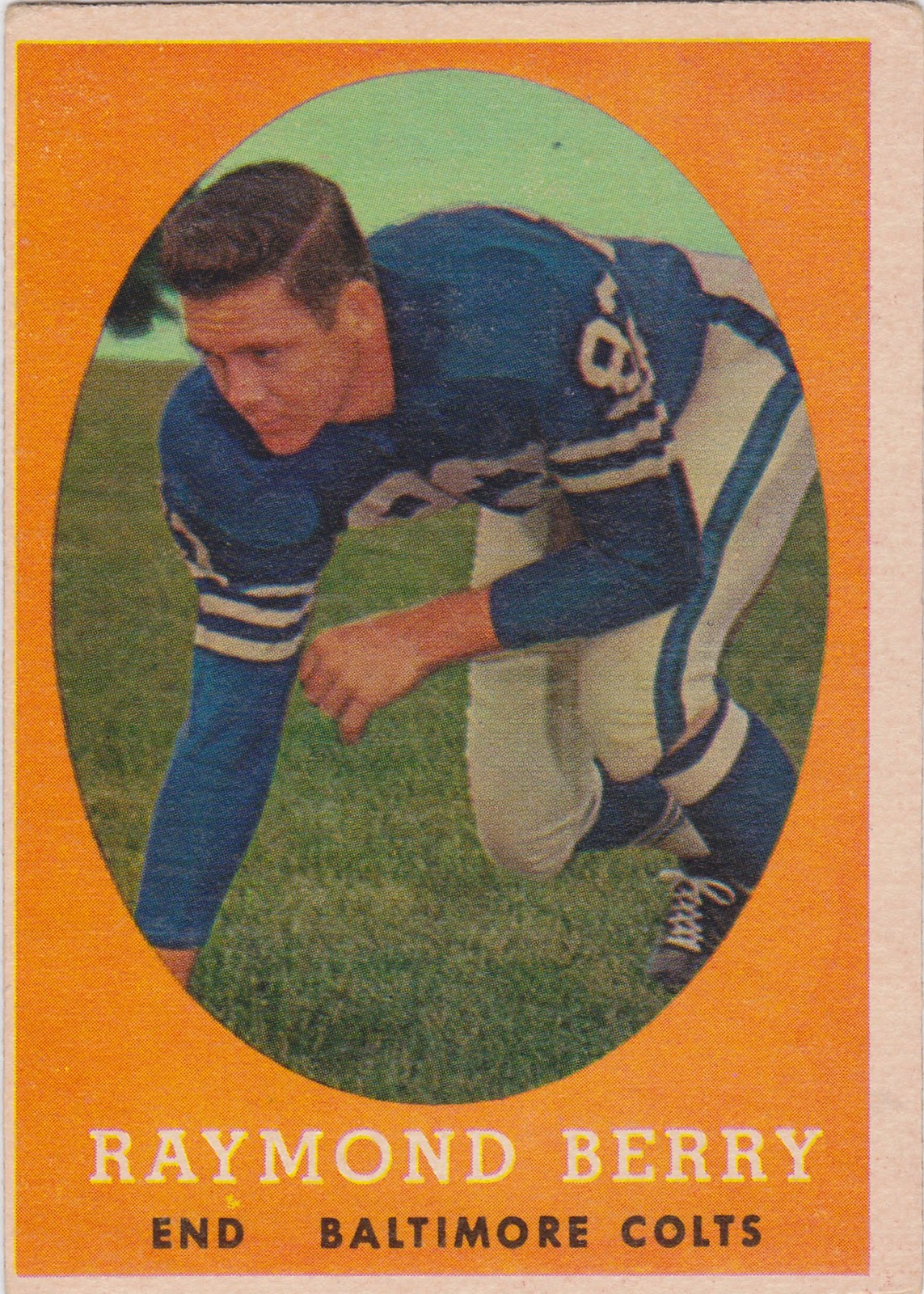 The iconic (well, it is!)  horseshoe helmet makes it's first card appearance this year. It's tucked under the arm of DB/kicker Bert Rechichar.  The players are still wearing the old jerseys with three sleeve stripes. The 'UCLA loops' a.k.a. shoulder loops were adopted in '58 but don't appear until the 1959 cards. 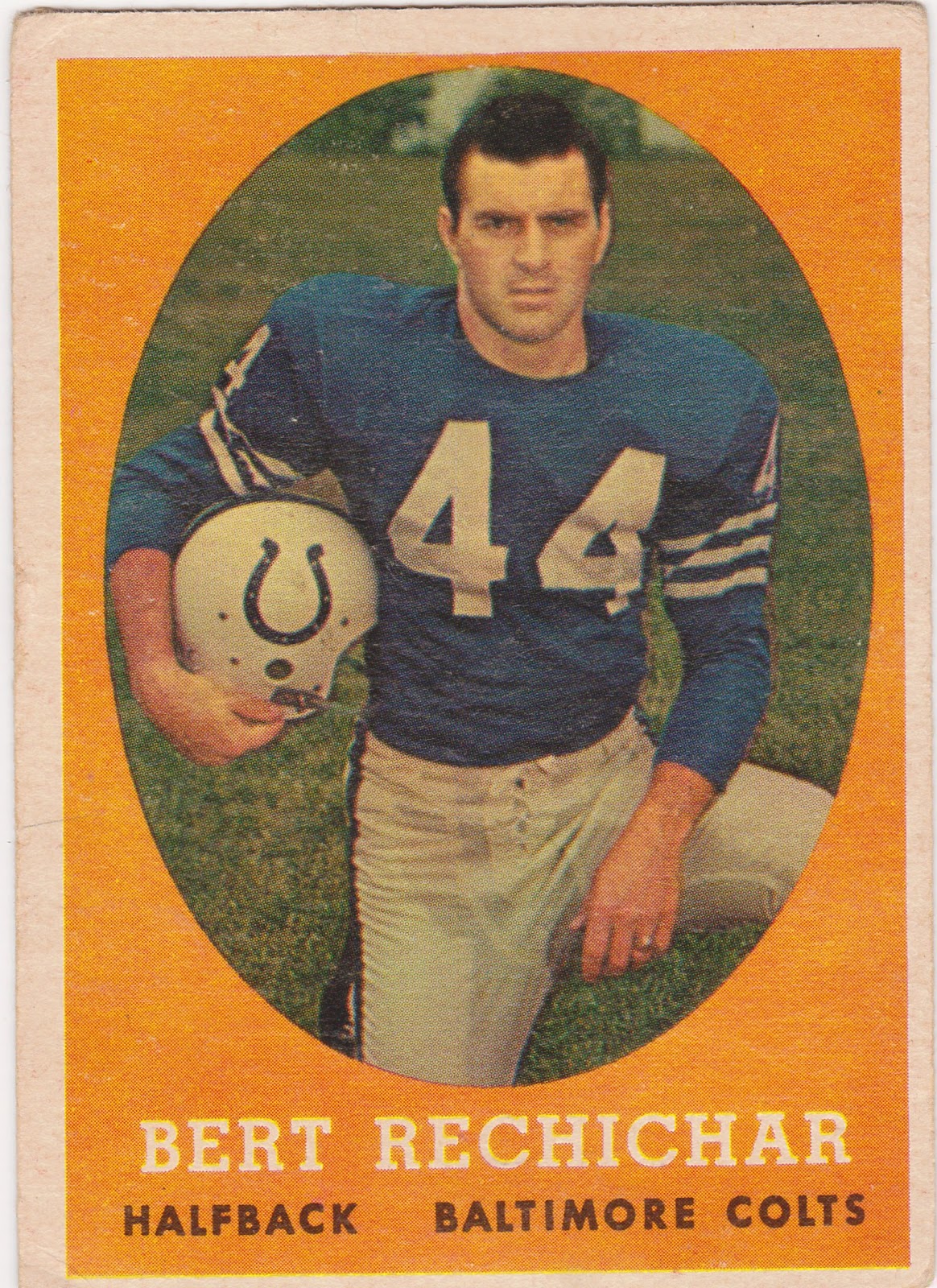 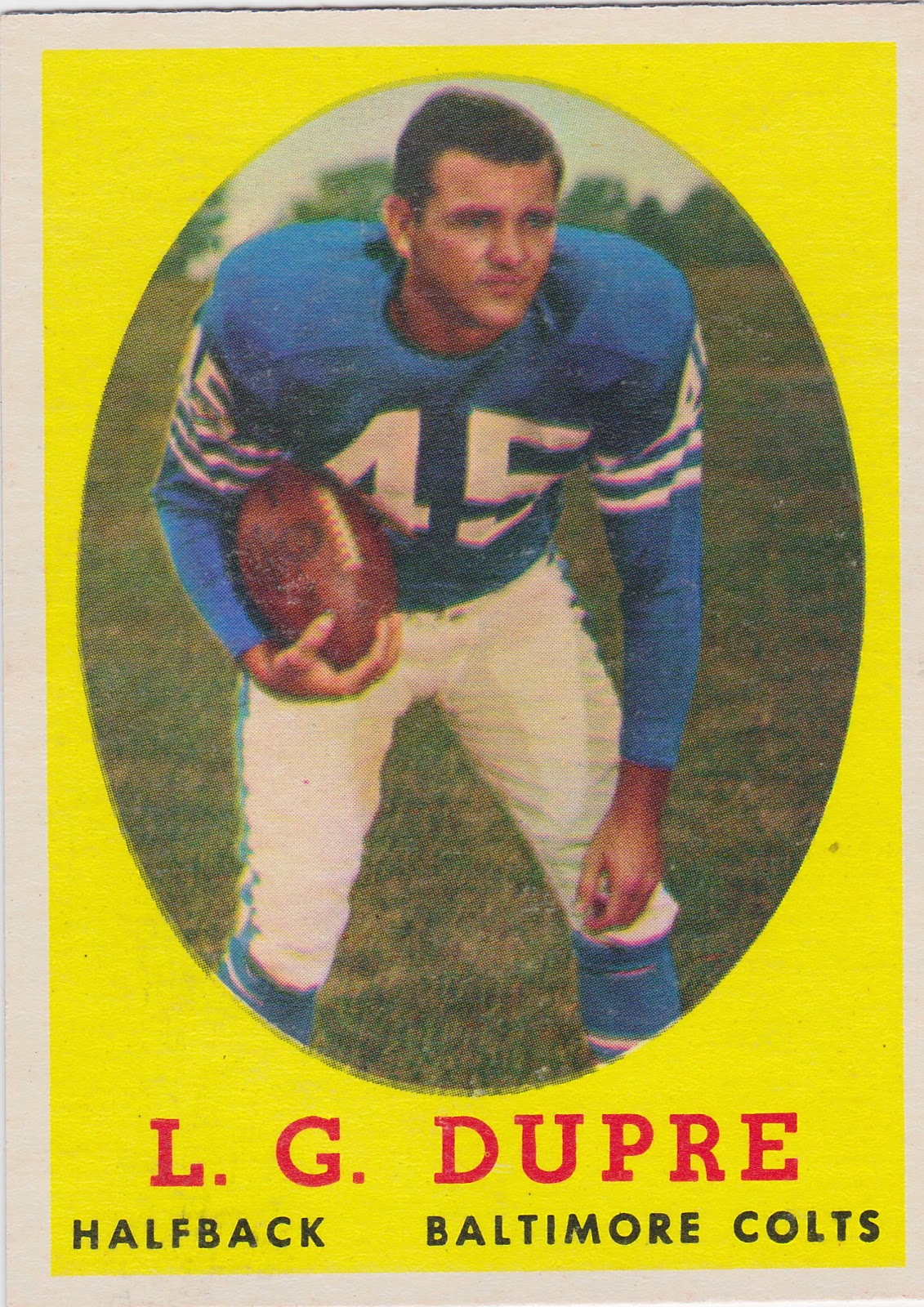 The '58 Colts team card is one of my favorites as it shows them in what seems to be a training camp shot and, unlike the upcoming '59 baseball team cards, retains the background to the photo. Add in the old school logo and it's a winner in my eyes. 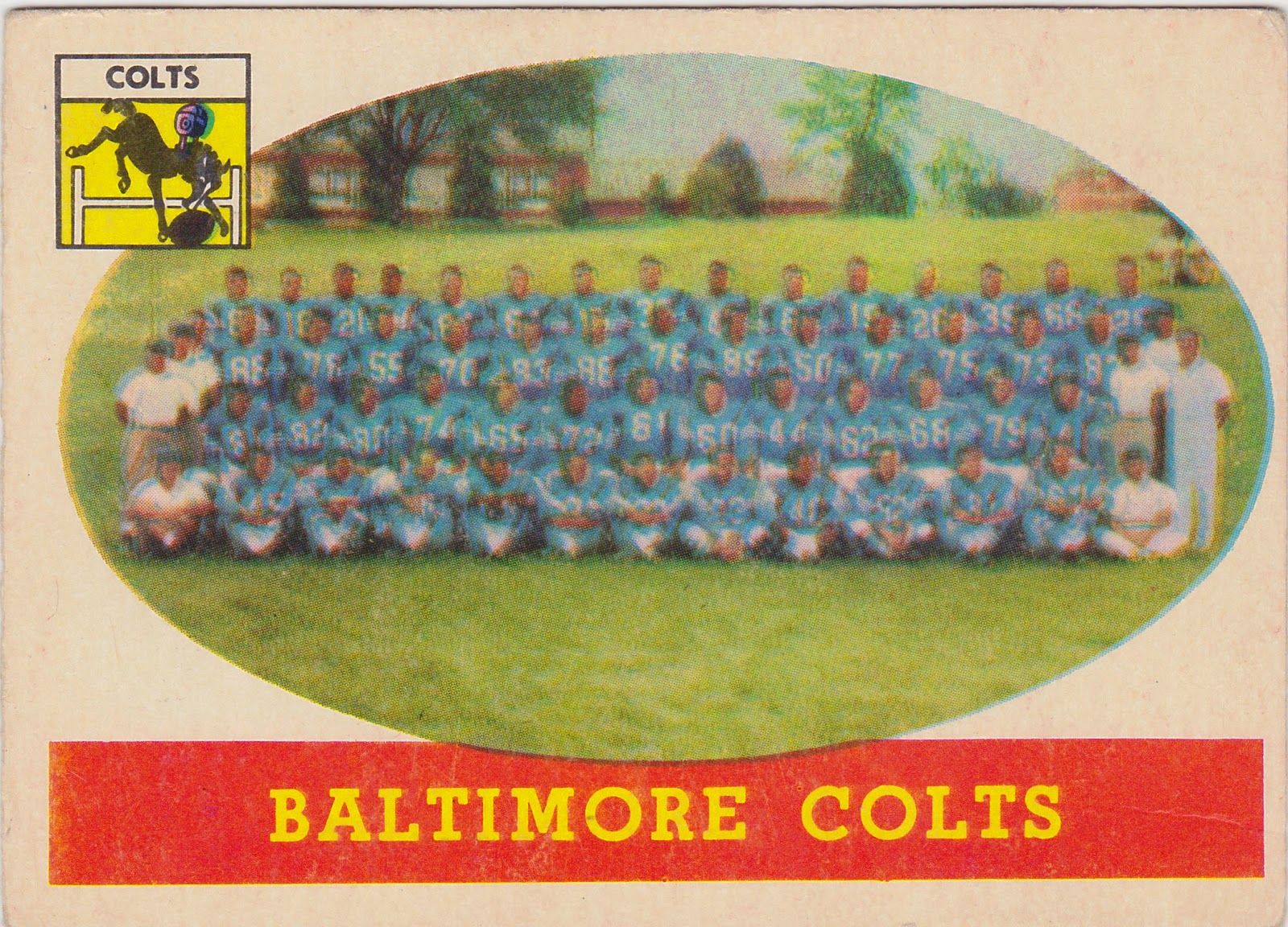 The card backs in '58 are the first to employ a 'gimmick', this one being a 'Football Fun' question whose answer is revealed by rubbing the box with the edge of a coin. 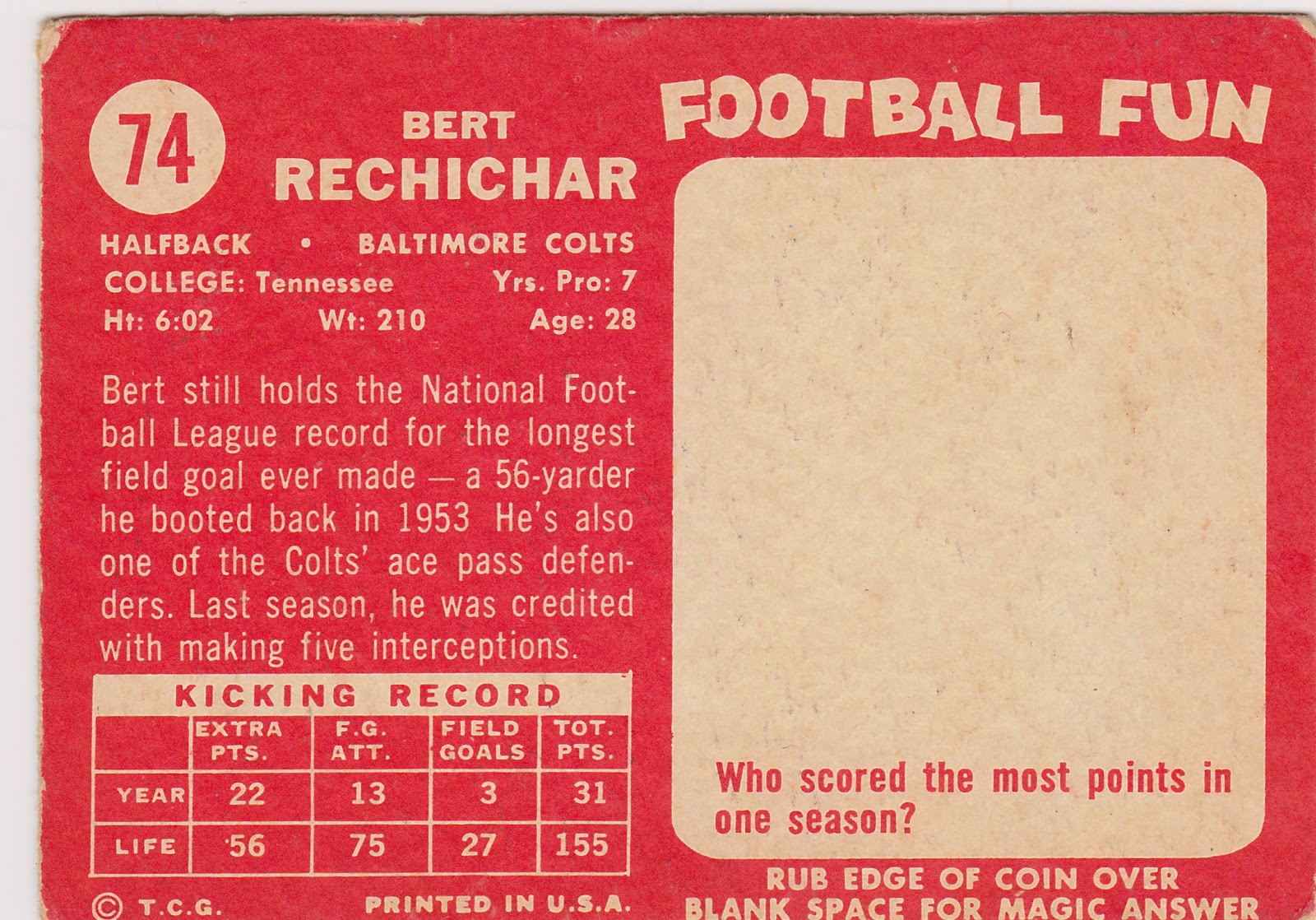 The rest of the gaudy red card backs were pretty mainstream with vitals, bios and numbers.

The back of the team card had to be music to the ears of young Colts fans back then. It foretells the soon-to-be championship the club would bring home that fall.

Topps 1960 baseball set with it's gaudy alternating color lettering received a 'trial run' with the 1959 football set. As defending champs the Colts apparently earned a bigger share of the checklist. There are 15 Colts players included as well as a checklist-backed team photo card and a team pennant card. I recently picked up the pennant card and finished this year off. 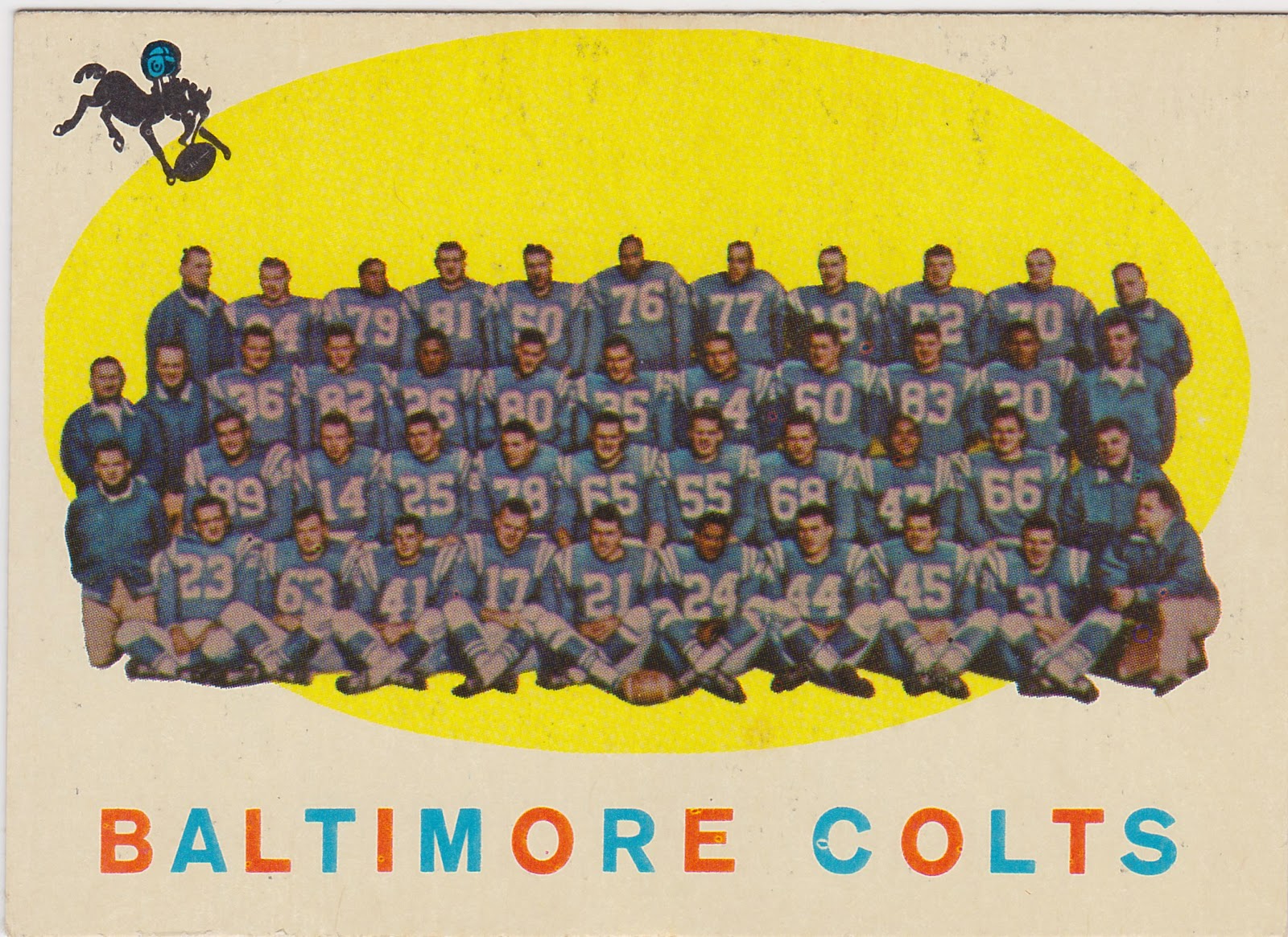 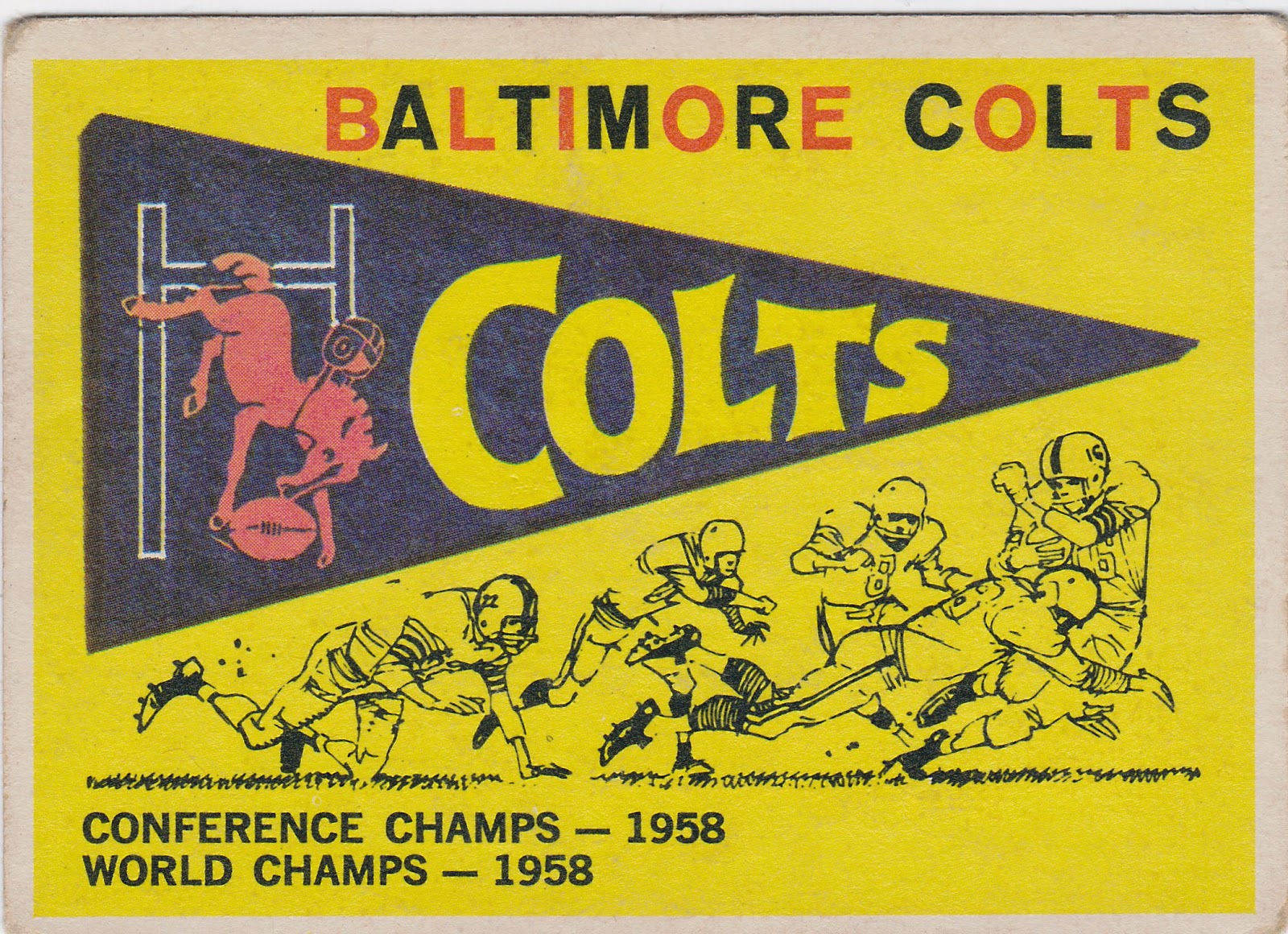 Mostly posed action shot again dominate the team with backgrounds in orange, yellow, pink-red and one green. Johnny Unitas, coming off his remarkable rise to the top of the league in 1958 got the honor of having card #1 in the set.

The leaping colt logo returns, minus the crossbar. Interestingly the little colt has a helmet which is 'white' on some of the cards and colored either light or dark blue on others. There is no rhyme nor reason for the variation as far as card background color or card numbering. I suspect that it is all due to printing variations /flaws. I see some variations of shading on different copies of the same card which also would make it seem like part of the printing process.

The logo colts' white and dark blue helmets can be seen on the Mutscheller and Unitas cards below. 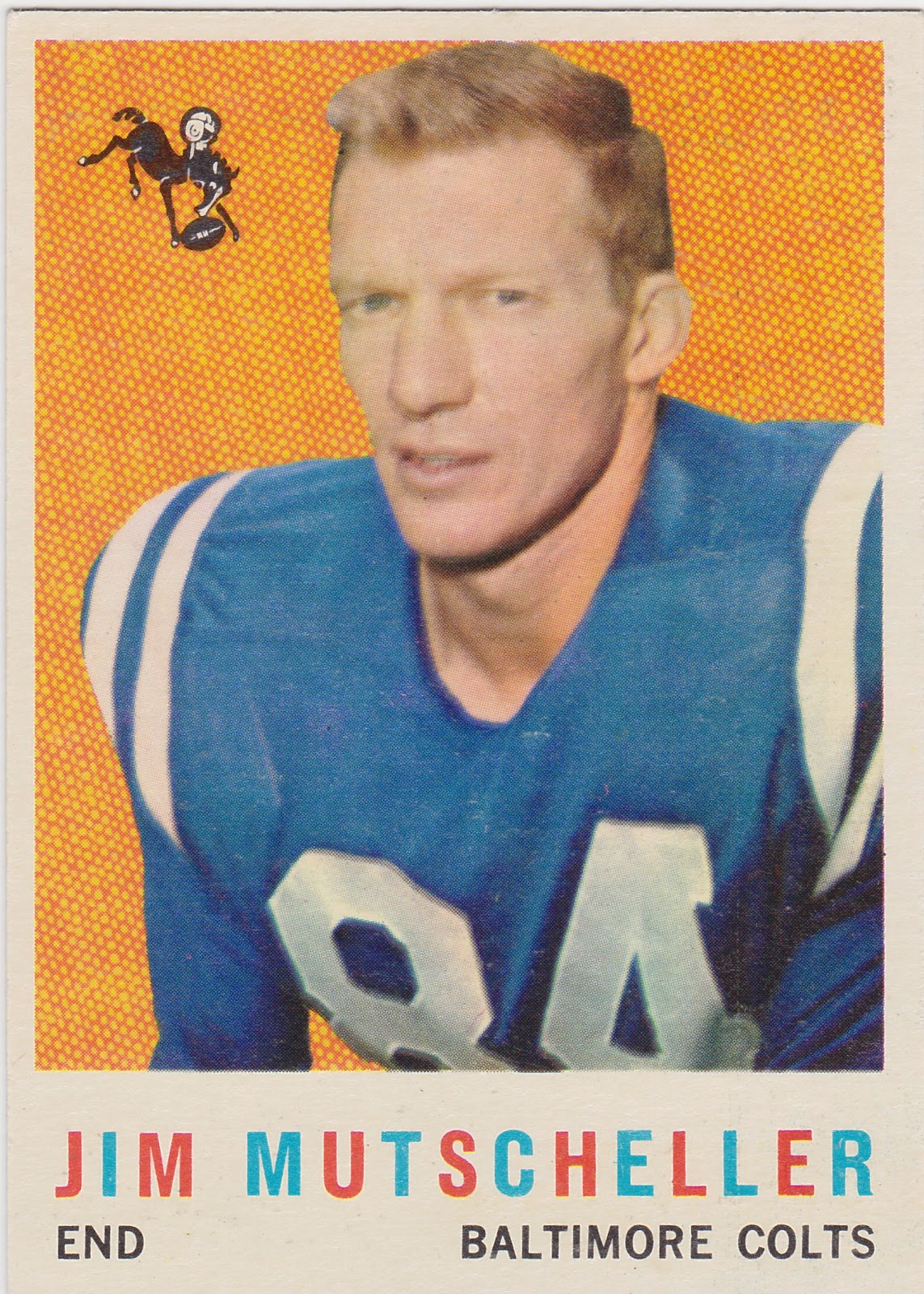 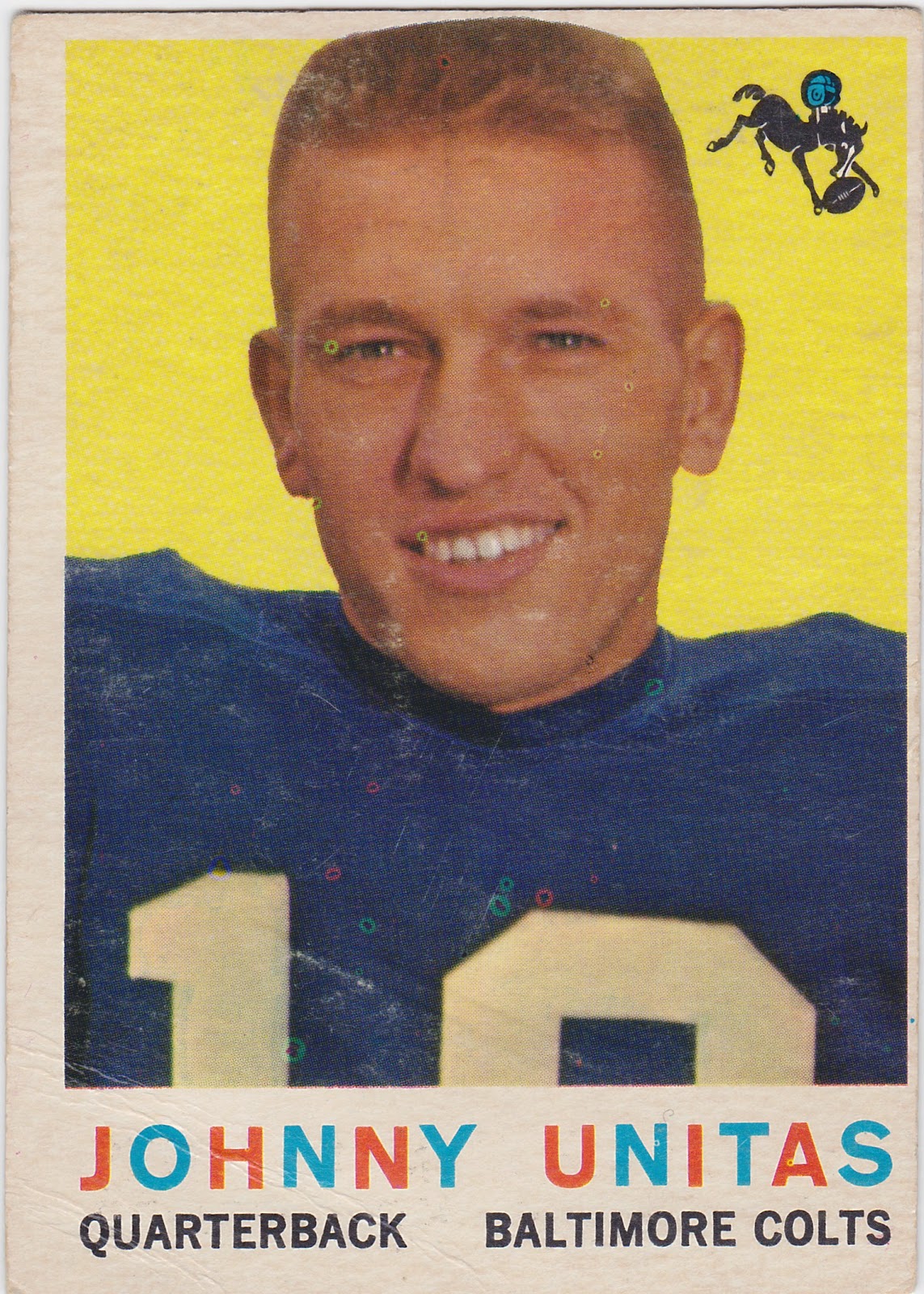 1959 Topps #1 Johnny Unitas, the Greatest Football Player Ever (Well, he is!) 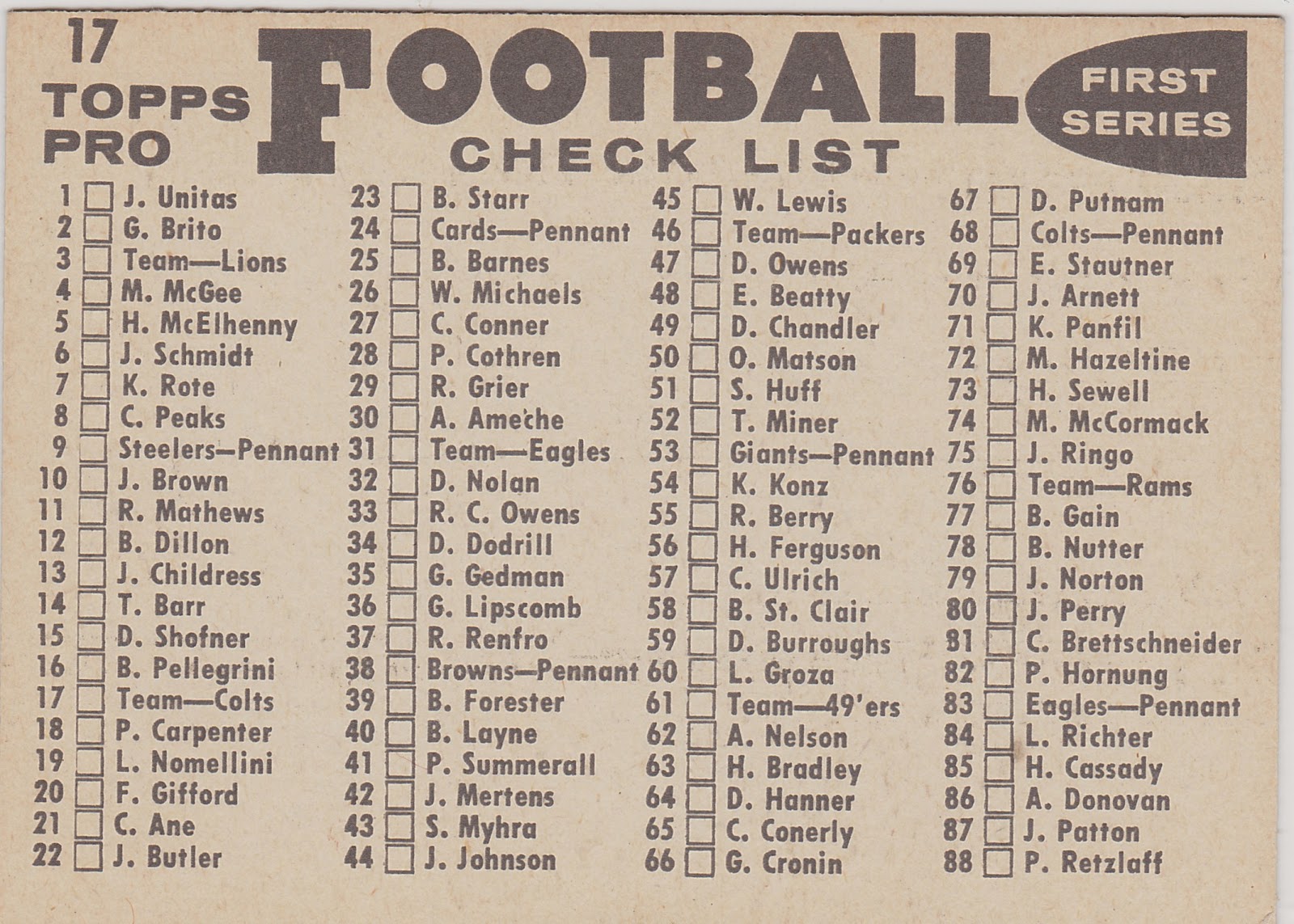 The player card backs and the pennant card back follow a fairly similar layouts, The pennant card has a blurb about the Colts championship and then a 'magic' football question for which the answer is revealed by rubbing the space with a coin. That's just like it was done in 1958. 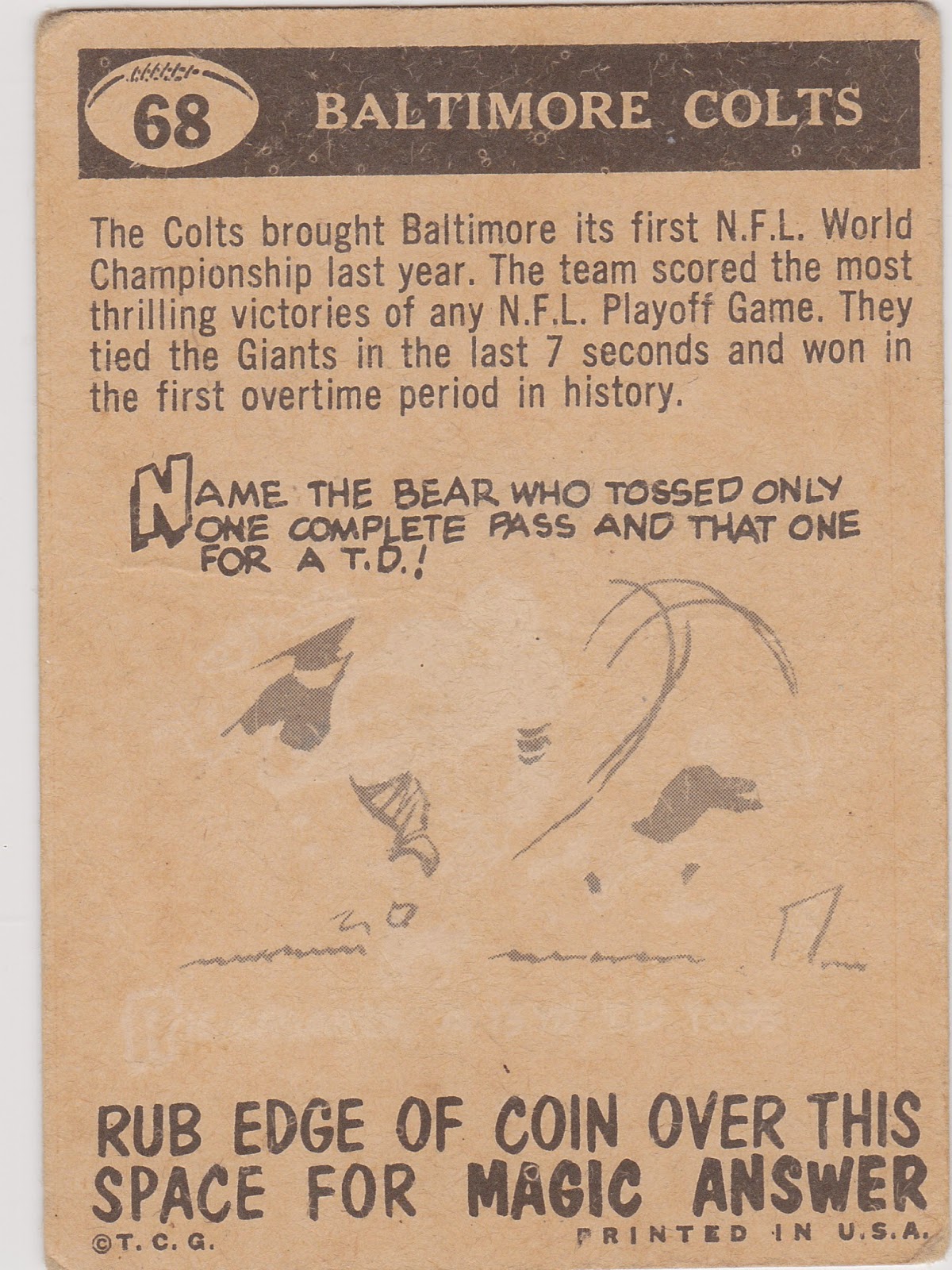 The player cards have vitals and stats for the 'skill position' players with a short paragraph replacing those stats in all other players (linemen, etc). 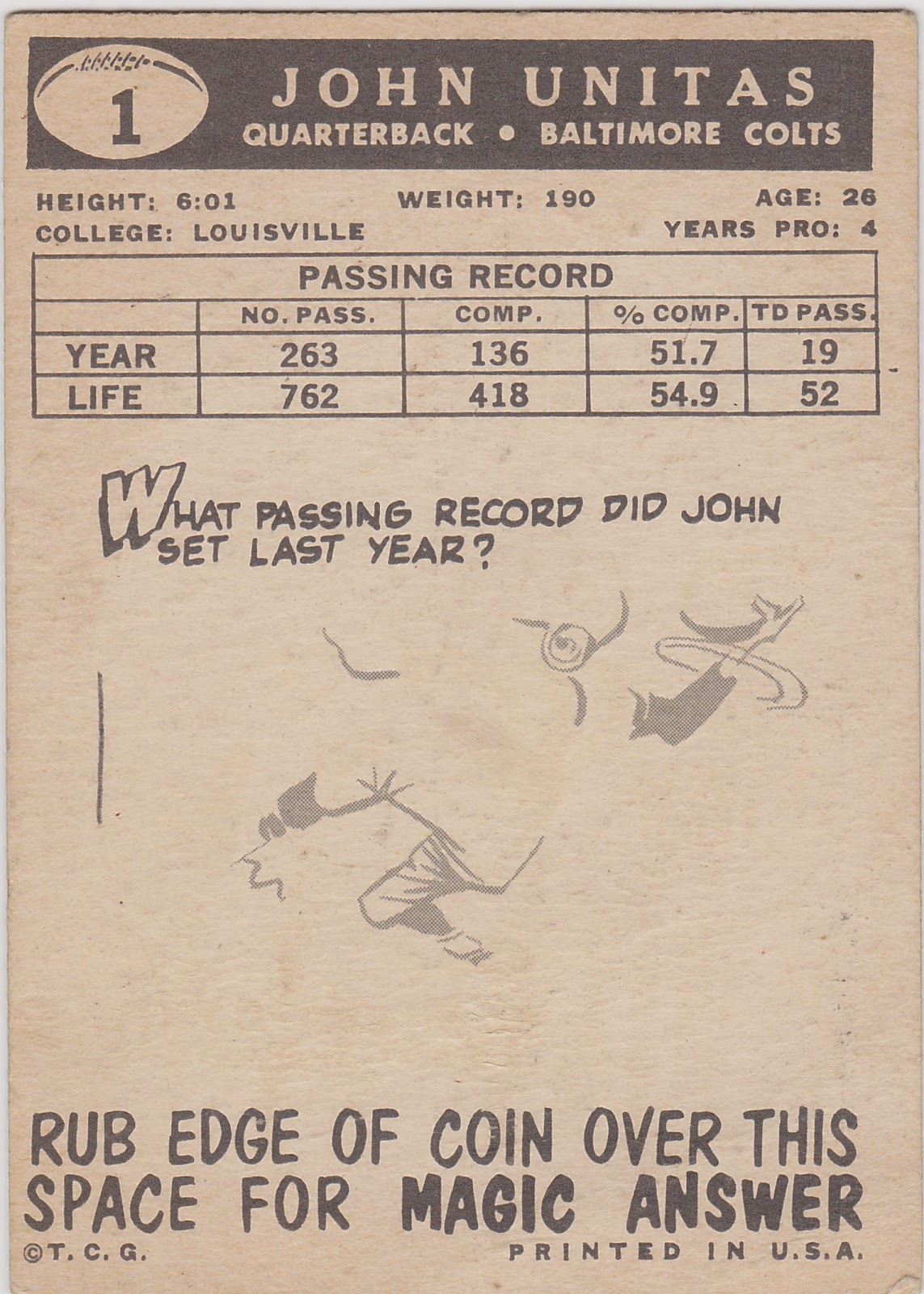 Topps was done, at least for awhile, as a football card monopoly after 1959. Fleer entered the picture with an AFL set in 1960 and went head to head with Topps with NFL cards in 1961. Those sets and more will kick off the next post in this Baltimore Colts card history series.

The remarkable blog, The Topps Archive, has posted a truly great and rare find. It's a football counterpart to the 1959 Bazooka baseball set. The cards came on the back of 20 piece gum boxes. Lo and behold the example posted on the blog is of Colts' fullback Alan Ameche. 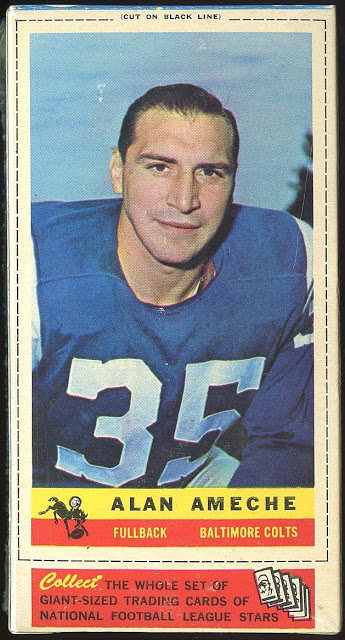 There is more about this rare and beautiful set in this entry at SCD online. the checklist is below. In addition to Ameche John Unitas appears in the set. There is a third Colts card but that one is a Colts card with a huge asterisk... Giants qb Chuck Conerly is labeled as a Colt but a corrected version fixes his team affiliation. Both versions are very rare as is this set in general. Looks like I have a coupls of new white whales!

Here's the Johnny U as seen on the Trading Card Database.... 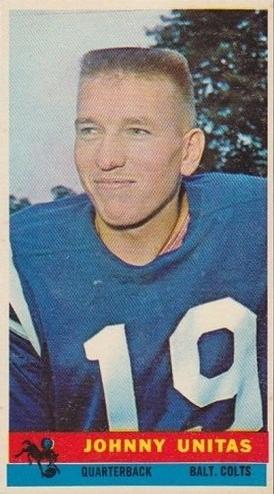 And the Conerly error from the same site: 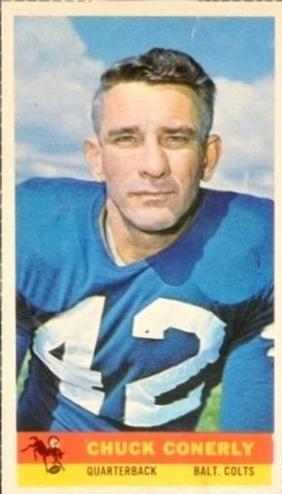