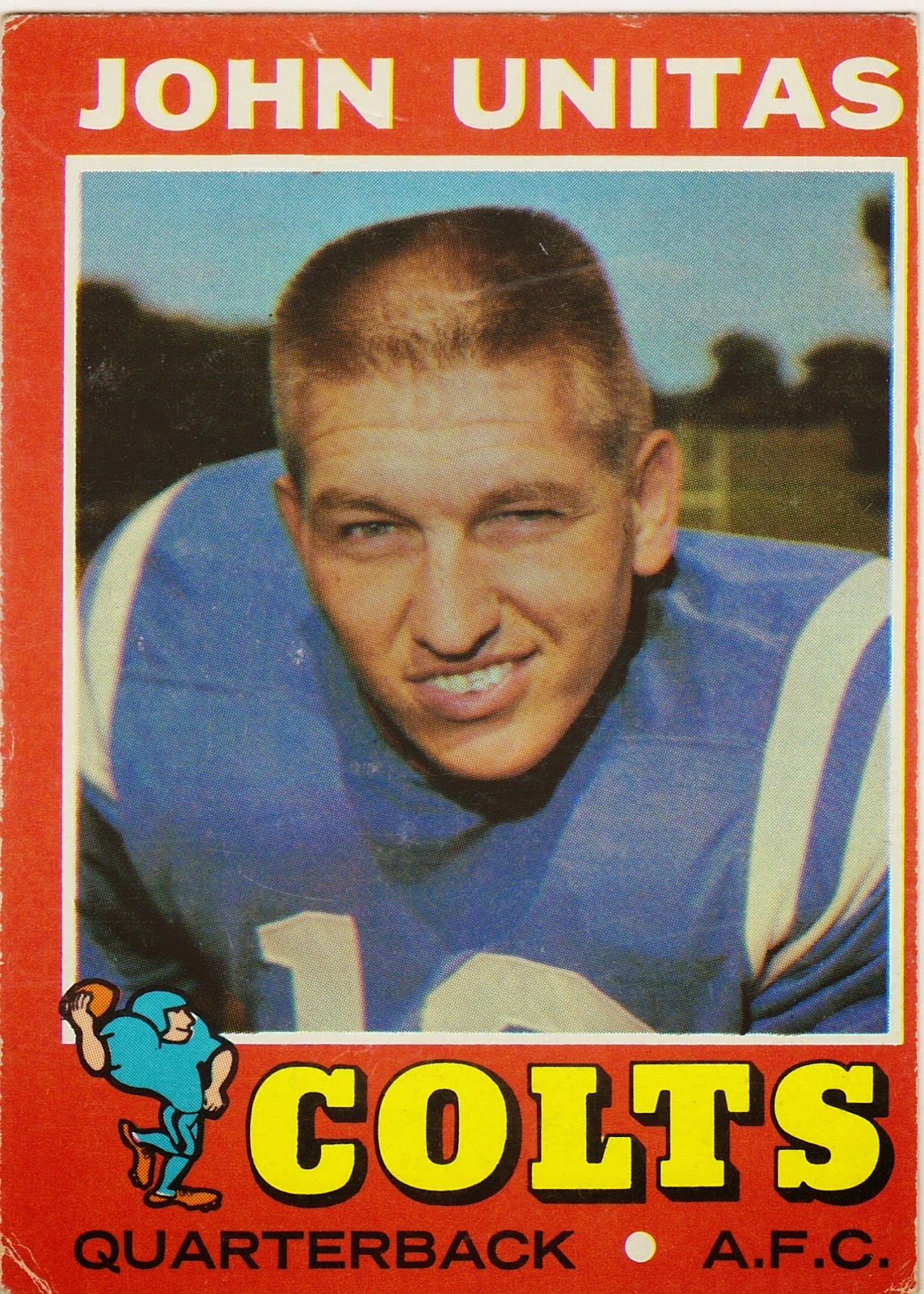 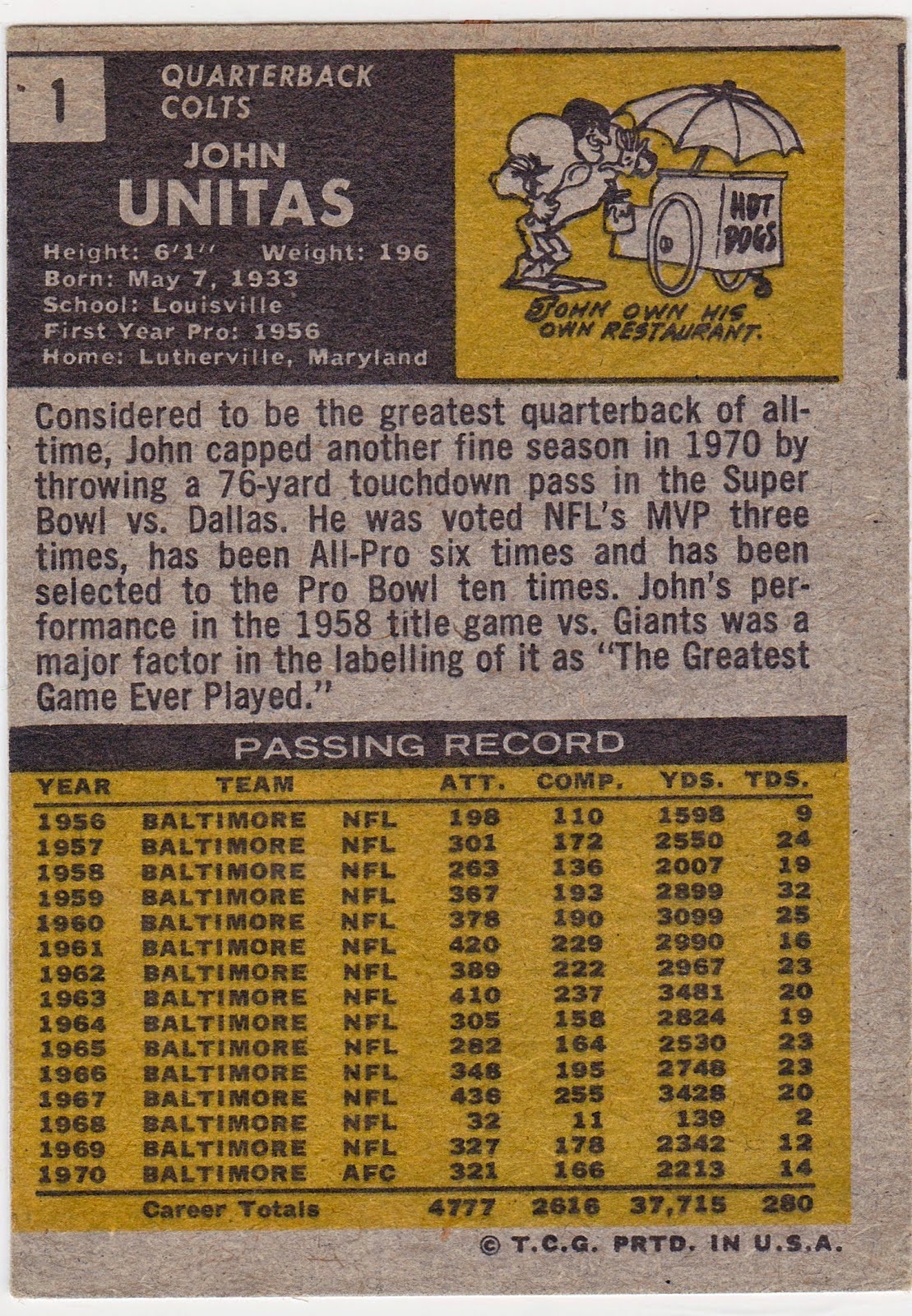 NFL Info: Not sure what to say about John Unitas, my hero and the player I consider to be the best football player of all time. Outside of my immediate family no one person's death has ever impacted me personally the way his did. I thought he'd live forever.

In his 18-year career, Unitas threw for 40,239 yards and 290 touchdowns in 211 games. Those are the basic stats. They don't seem that special anymore. But the game was different then. Compare them to his contemporaries and they stand out. I'm going to post various quotes from sites I've bookmarked over the years.

Unitas could intimidate without being one of the physical players. He played in an era when quarterbacks did not receive much protection, specifically on late hits. Throughout his Hall of Fame career, this three-time NFL MVP played with a number of injuries, including a badly broken nose, broken fingers, ripped arm tendons, and torn knee cartilage. In 1958, with three broken ribs and a punctured lung, he led the Colts to the NFL title while wearing a protective harness. Two years later Unitas played the entire season with a broken vertebrae.

What made Unitas special, [Ray] Berry said, "was his uncanny instinct for calling the right play at the right time, his icy composure under fire, his fierce competitiveness, and his utter disregard for his own safety."

As a player, Unitas was unsurpassed. Unitas threw a touchdown in 47 straight games. He invented the two minute drill. Unitas led more come from behind victories than any quarterback in league history. The hall of fame QB was honored with the MVP award three times during his career. No.19 was also named player of the decade for the 1960s and he made the Pro Bowl ten times during his illustrious career.

Unitas possessed a keen sense of what to do on the field. He absorbed and studied any playbook he had like a computer. His decisions were always precise, rarely wrong.

The greatest defensive end in football history, Deacon Jones, claimed that there really was no way to beat him. If opponents tried to rattle him by hitting him, he kept getting back up. If a team tried to get him moving out of the pocket, he was able to improvise. You try to make him throw deep because he doesn't have the arm strength, but he hits Raymond Berry in stride down the field every time.

And here, from a previous post, is the brief story of the only time I saw him play in a regular season game, in October of 1970:

Two things stand out about that game. First is that had it not been a Colt game we might not have gone. The rain was horrendous as it often can be in Houston, and we had to get up from watching the Orioles and Reds playing Game Two of the World Series. But it was the Colts and my Dad knew how much I wanted to actually see Unitas play so off we went, listening to the Orioles as we drove.
The second thing is how the Colts won. On their last drive of the game Unitas threw a scoring strike to Roy Jefferson for the winning TD. As long as I live I'll never forget seeing my all time favorite athlete throw the pass and begin to trot towards the sidelines even before it was caught, not even watching. Even nearing the end of his career Unitas was a joy to watch.

Fantasy Impact: No, my league isn't quite old enough for me to have had an active John Unitas on my team. But back in the mid-'90s when we were just moving into the computer software age of league management I had the bright idea that it would be cool to use the software's ability to 'add' Unitas to the database and pick him up as a sort of personal 'tribute' to him. So I did.

In 1995, for one brief weekend, Johnny Unitas officially was a member of my fantasy team, the Baltimore Flyers. He then 'retired' and a press release to that effect was sent out.

The Card: 1971 Topps football set is very popular. It's loaded with stars and key rookies. Getting cards in really great condition has to be tough given the 'full bleed' color borders, just as it is with the black bordered baseball set from that year. I have a couple of copies of this Johnny Unitas card and this one is the choice for my fantasy player binder. That's a fabulous picture of Johnny U. He's got that crooked smile and the trademark flat-top haircut.

While the front design is kind of juvenile with the cartoon-ish player indicating position and the big font, the back is one of my favorites from that era of Topps football. That may be so simply because of this card. It's really neat that Unitas is #1 (as he should be!) and nothing beats a 'wall of stats' from a Hall of Fame career.

The restaurant referred to in the cartoon was "Johnny Unitas' Golden Arm". I ate there once with my uncle on a trip to Baltimore. I probably had a burger although all I really remember was all the cool  Colt's memorabilia around the place. My uncle always kidded me because I kept looking around for Johnny U. to stroll through. He didn't. Eating there was like having lunch at the Vatican hoping the Pope shows up.

I finally got to meet The Man in person many years later at a card show. In those days, before TriStar and mega autograph signings it wasn't unusual for the signing players to stroll in and out of the room right through the tables escorted by the show promoter. I positioned myself near the door that day and was able to shake Unitas' hand and fawningly mumble something stupid and awkward as he made his exit. But it's a cool memory.