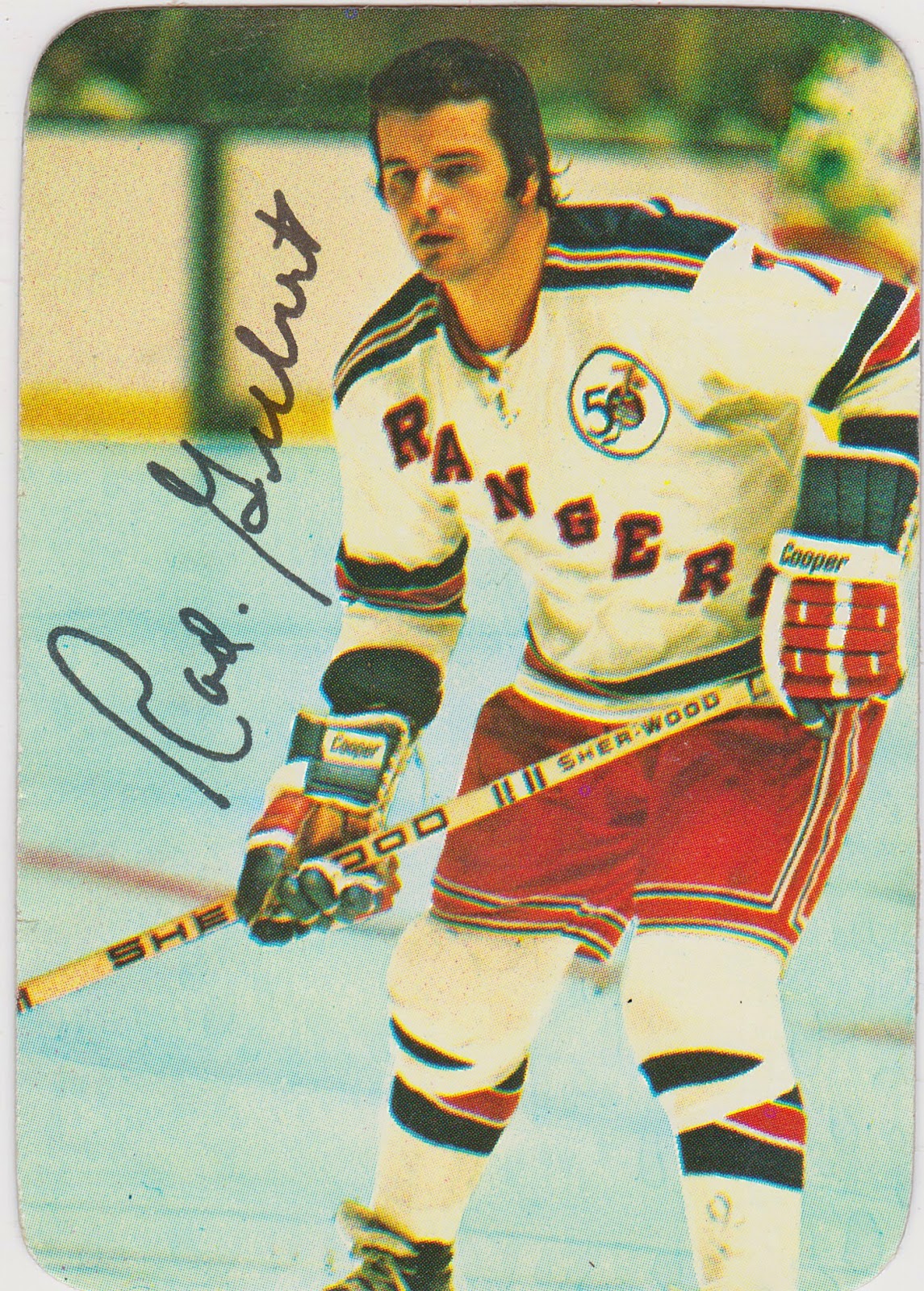 My Rangers open their home schedule tonight at Madison Square Garden after splitting a pair of road match-ups. I'm glad to have them back on the ice. Just enough time has passed for me to have gotten over their Cup Finals loss to that team out in California.

I'm leading off the celebration with a card sent to me recently by Mark Hoyle. One that is new to me and very welcome seeing that it features my favorite Rangers skater, Rod Gilbert. That's a 1976 Topps Glossy insert. I wasn't collecting hockey cards in '76. I was living in Houston, not long out of college, and keeping up with the Rangers via long distance was difficult.

The set consists of 22 cards, one of which is Phil Esposito as a Ranger :::shudder::: and Brad Park and Jean Ratelle in Bruin sweaters. For those reasons alone I won't be chasing this set. But I'm sure glad to add this one to my ever increasing Rod Gilbert collection! 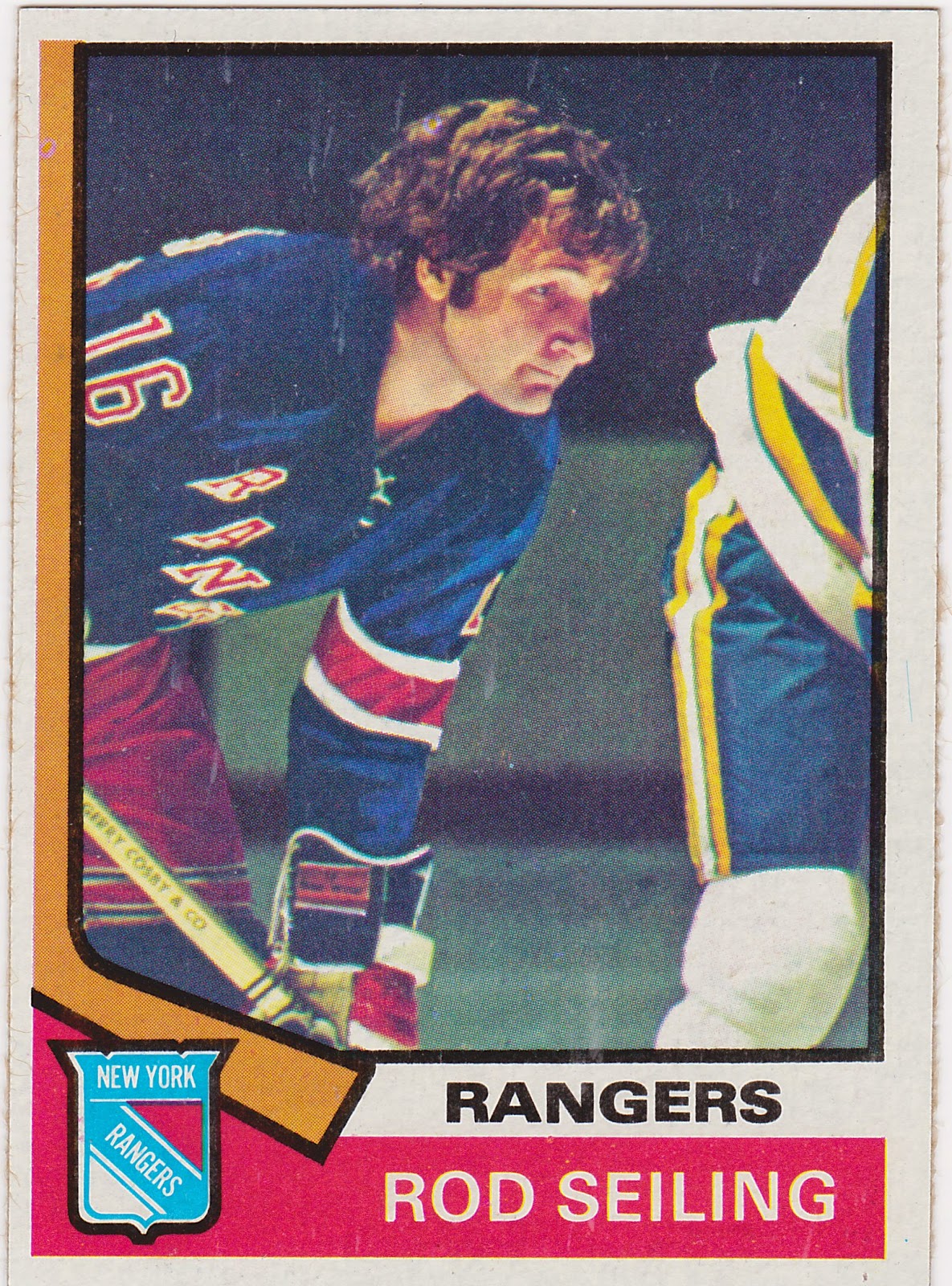 Rod Seiling played for the Rangers for just over a decade, from the early 1960s through 1975. He was one of those guys who seemed to become a lightning-rod for fans' frustrations during some disappointing seasons around Madison Square Garden. When you looked at the club's defensemen you saw the near legend Harry Howell, the brilliantly talented Brad Park, the uber-cool Jim 'Chief' Neilson and the pair we loved to rag on, Seiling and Arnie Brown.

Hey Rod, consider this my apology. 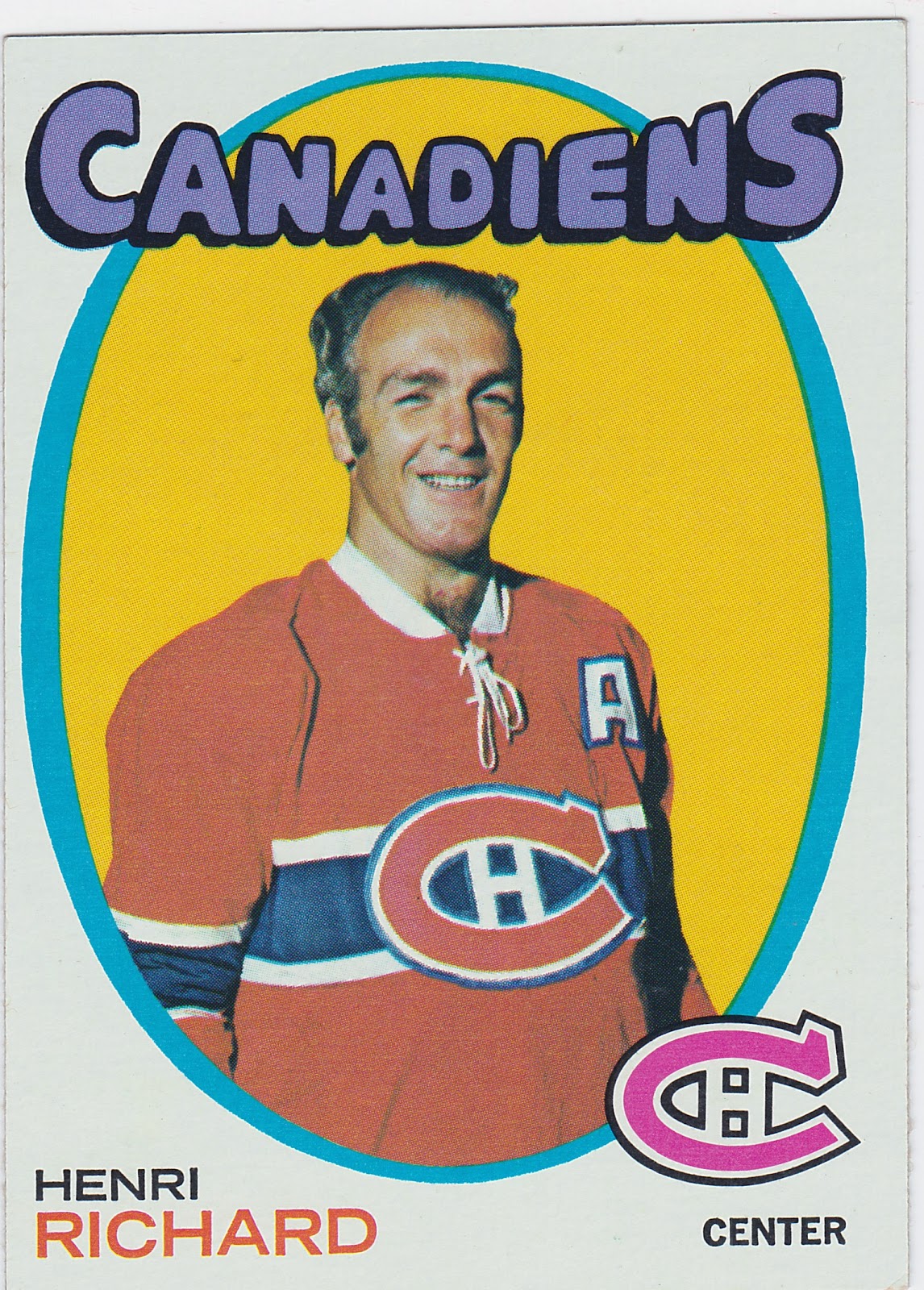 Here is a trivia question for your next bar nite. What two North American athletes have won the most championships? The answer: Henri Richard and Bill Russell. Both won 11 rings as players.

Henri is the younger brother of Maurice 'Rocket' Richard. I never saw Maurice play but I did see Henri many times throughout the second half of his career in the 60s and 70s. Like his brother, Henri Richard is a Hall of Famer.

The 70-71 Topps hockey set has that 'Pop Art' vibe to it. It's certainly different. If I was a Canadiens' fan I'd probably be perturbed that their iconic logo is rendered in pink here.

btw.... Hoyle included many other goodies in the two (yes, two) envelopes that arrived last week. When my life settles down I'll be posting some others.