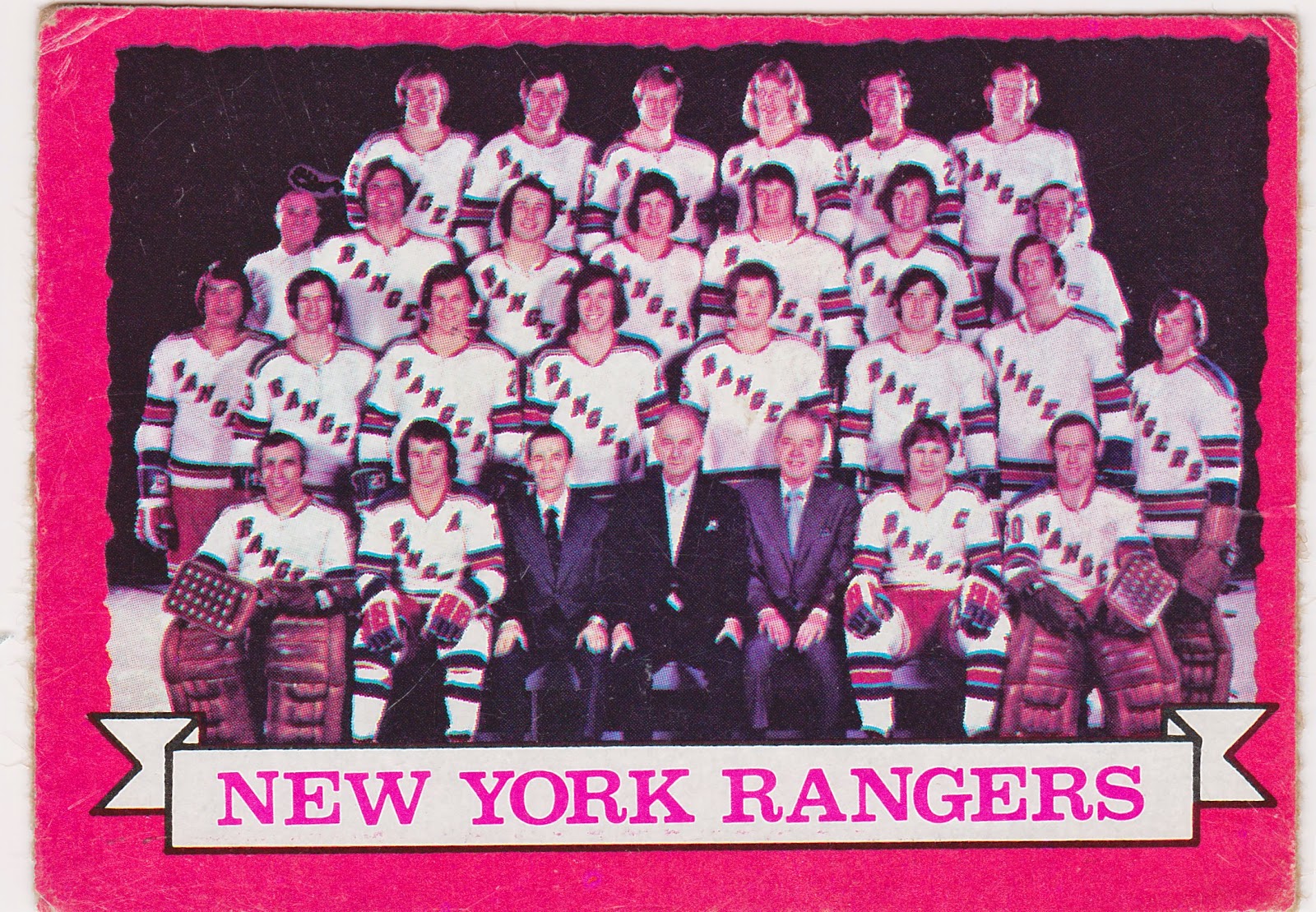 I'm sure most of us can say that we got our love of sports from our Dads. I know I did. He's been gone for a few years but I'll always have memories of the great times we had at ballparks and arenas in and around New York and elsewhere as I was growing up. And even much later as I was able to take him to ballgames. He loved watching the Texans and Astros in later years. Thankfully I was in a position where I could repay in a small way the stuff he did for me back in the day.

So in his honor I'm posting cards of his favorite players (or guys who were among his faves... I don't have a DiMaggio to post for him. Joe D. was his hero.

The one team we both lived for was the Rangers. I went to my first game with him in 1959 or 1960, I'm not sure which. Anyway his favorite Ranger was longtime Blueshirt backliner Harry Howell. 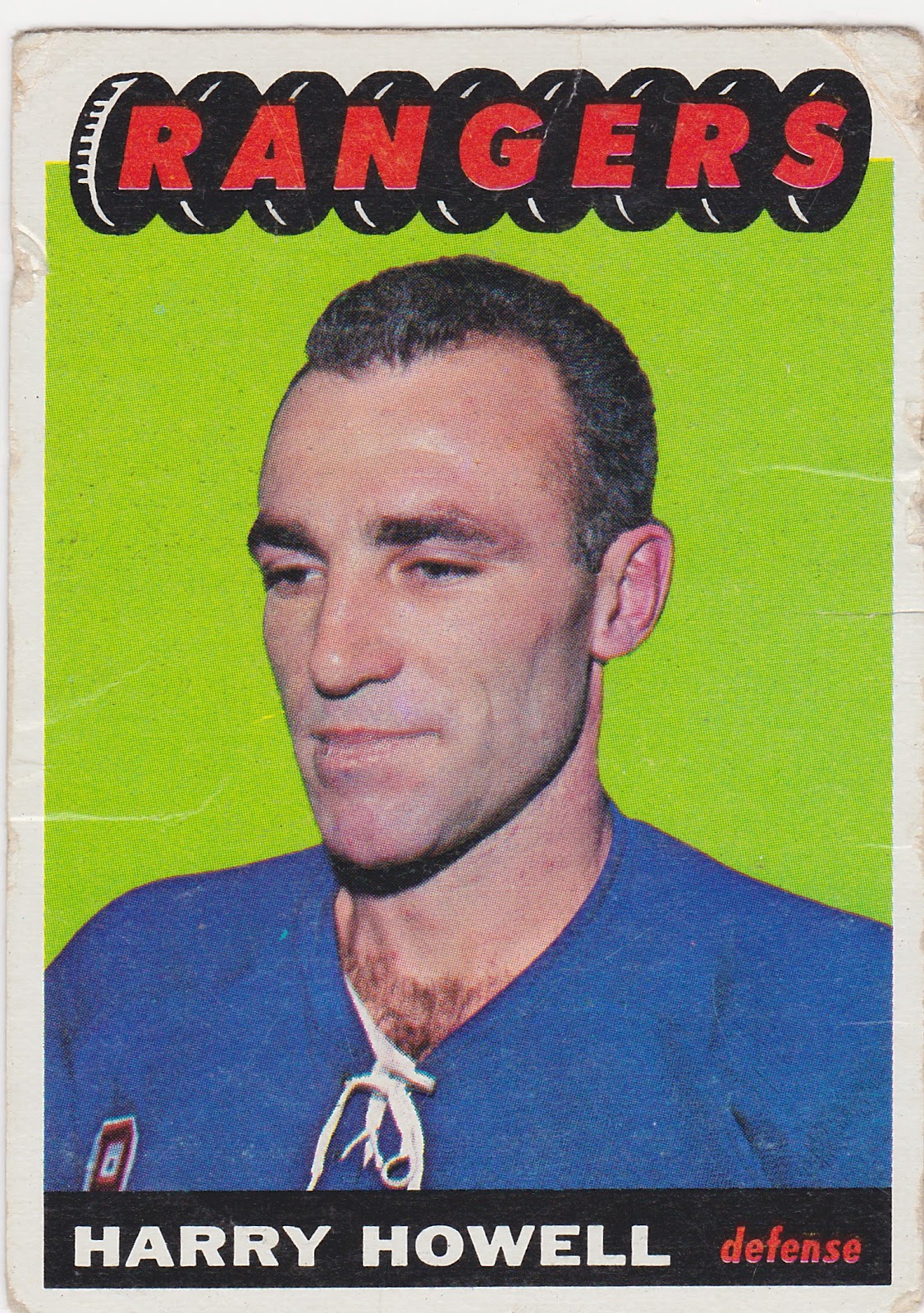 This 1965 Howell came as part of an amazing package from Chris of the terrific Diamond Cuts and Wax Stains and 1964 Tall Boys blogs. I'll have plenty more to say about that envelope real soon.

Next up, Whitey Ford's 1964 Topps Giants card. As I noted Joe DiMaggio was my Dad's favorite ballplayer, and Allie Reynolds likely his favorite pitcher, but whenever I see a Ford card I'm reminded of the umteenn times he and I saw this guy pitch in Yankee Stadium. My Dad loved doubleheaders and we went to most of the ones the Yanks played on Sundays in the 60s'. I bet Ford pitched in 75% of them, usually the first game. 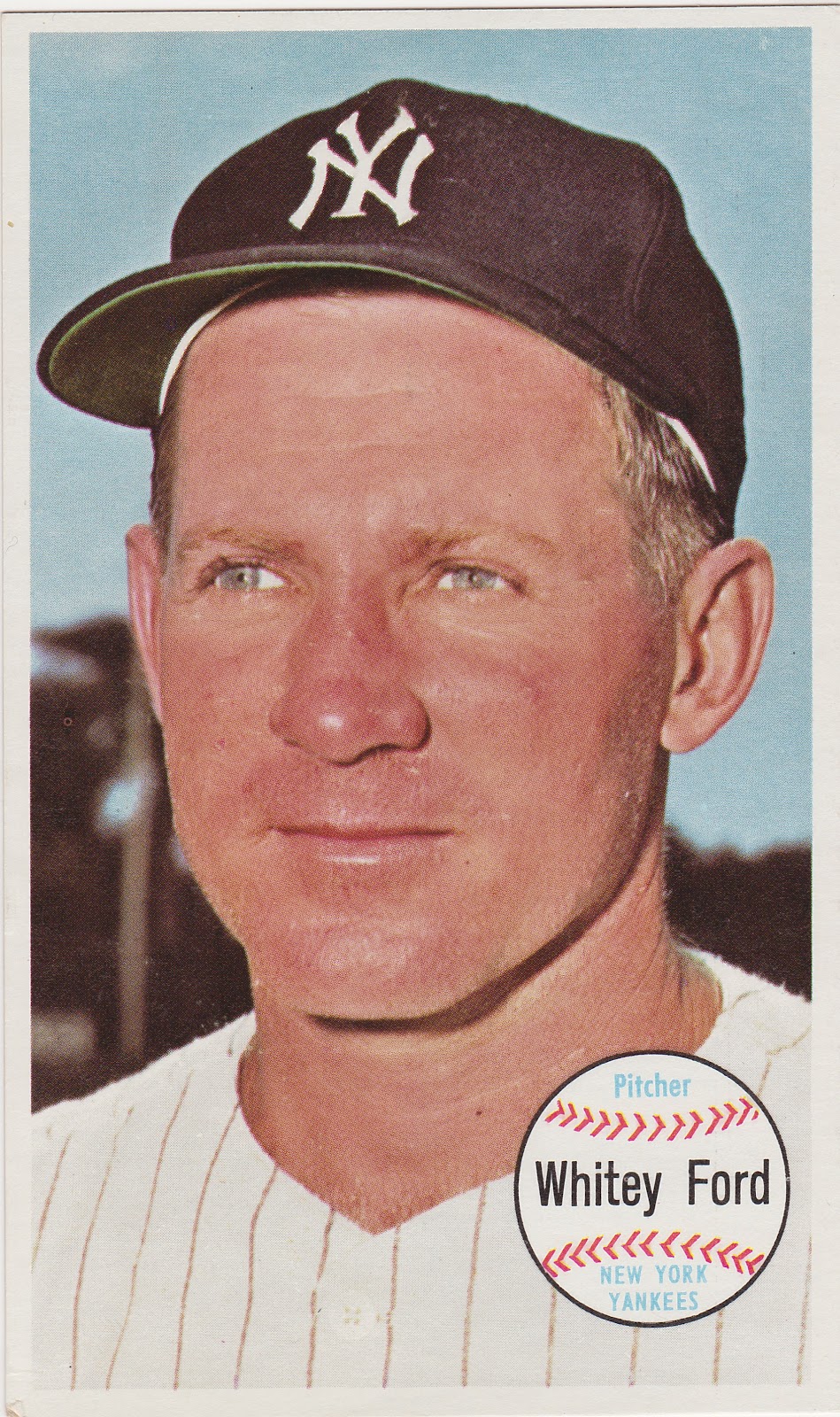 My Dad also was devoted to the New York Football Giants, as they were called by those who had grown up with two Giants franchises in New York. He and I never saw that Giants play in Yankee Stadium but we always went to Princeton to see them play the Eagles in their annual exhibition game there. The NFL wasn't on TV like it is now back in the day. We listened to many more games together on the radio than we could watch on the tube. I wasn't a Giants fan but the sound of Marty Glickman and Al DeRogatis broadcasting from Yankee Stadium is part of my being.

My Dad always loved Sam Huff. He never failed to mention that Huff was a 'real football player'! This 1963 Huff really takes me back. I love this card. It looks like it was shot during the training camp sessions we went to up in Connecticut back then. Good times, great memories. I'd never fail to tell my Ol Man what the Colts would do to the Giants if they met for the title. 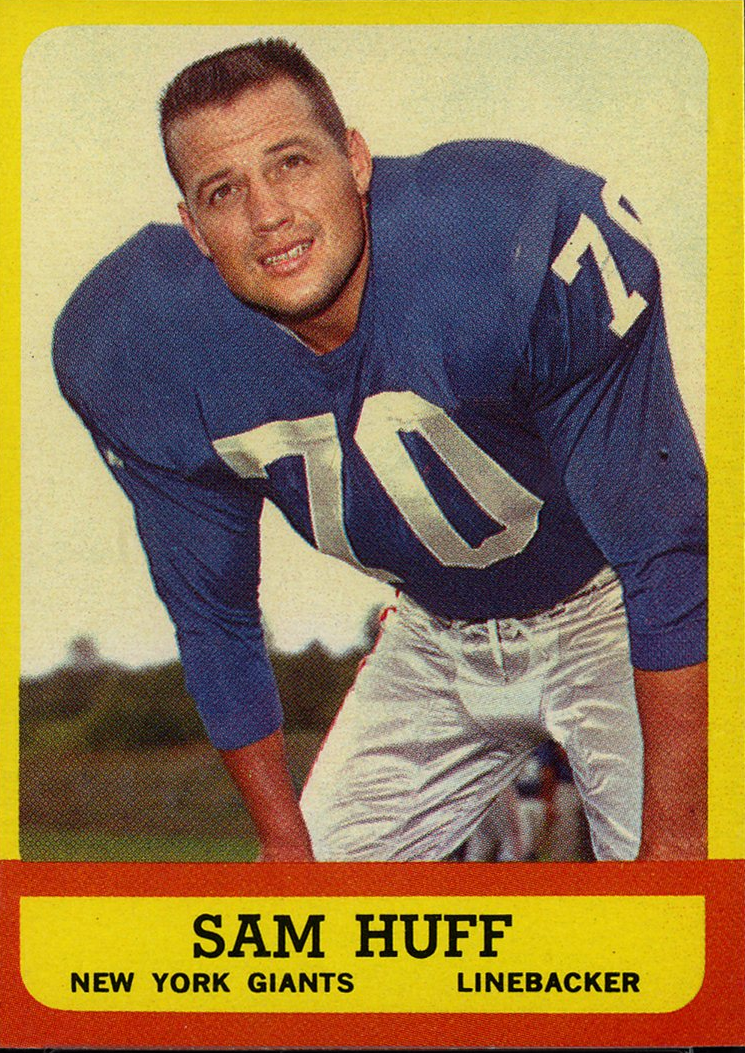 My Dad was a helluva guy. I bet Sam Huff would say he was 'a real father'!

One last thing, here are a couple of pics of my Dad at the 2005 World Series. First outside Minute Maid with my friend and college roommate Robert Wuhl (a.k.a Arli$$): 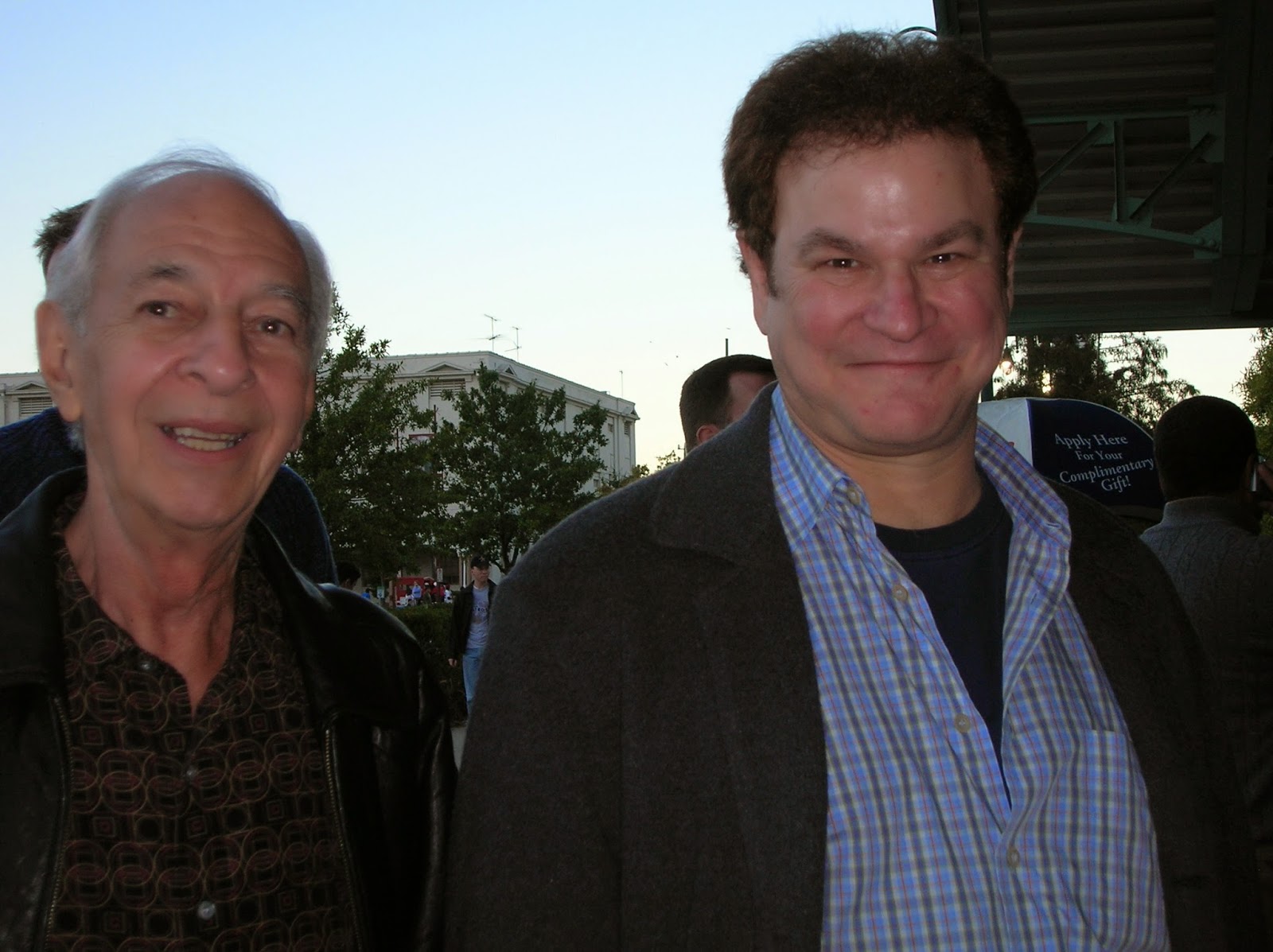 We watched the game from Roger Clemen's suite. My Dad got a huge kick out of it all. Great night, he talked about it all the time after that. 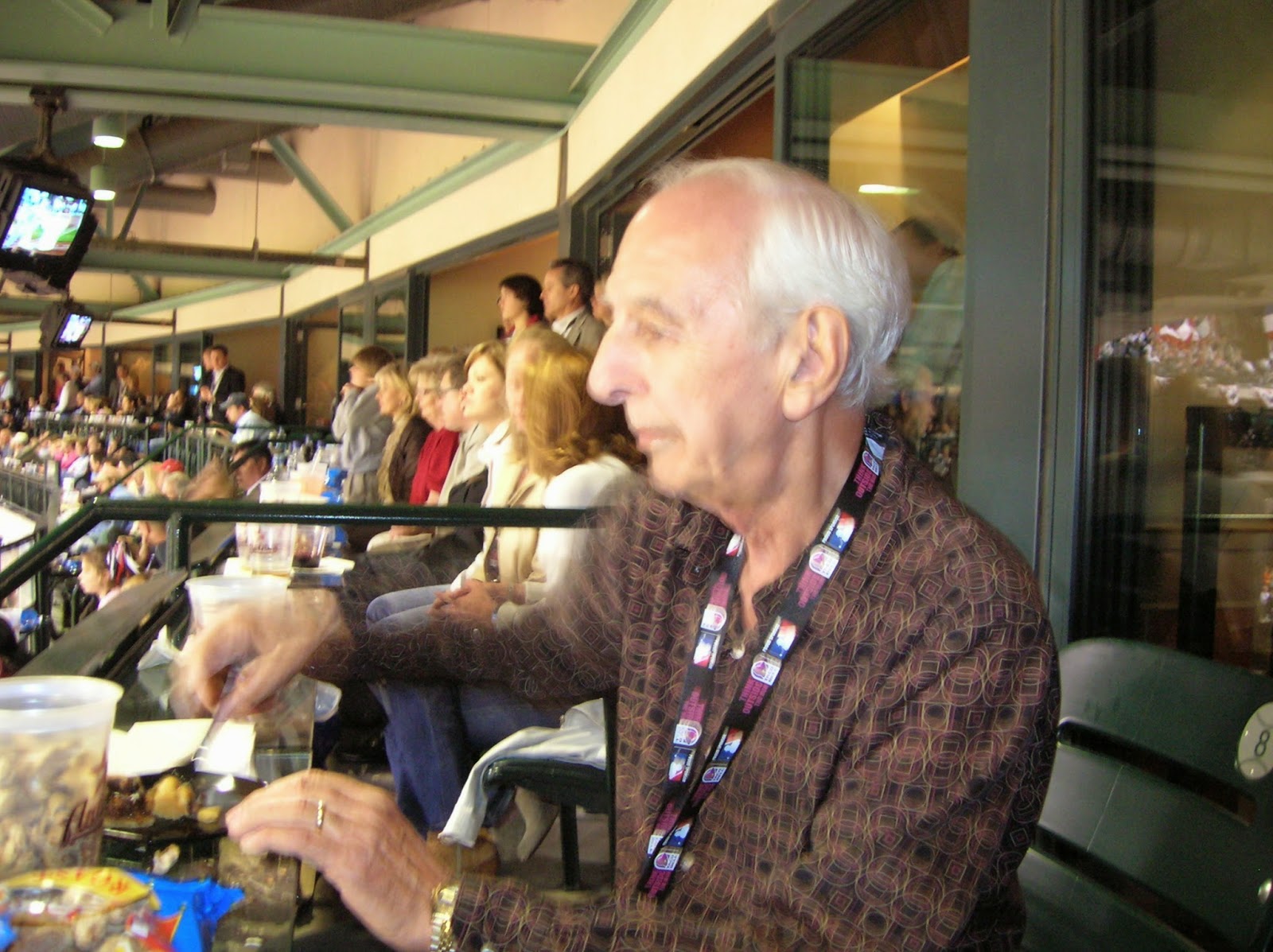