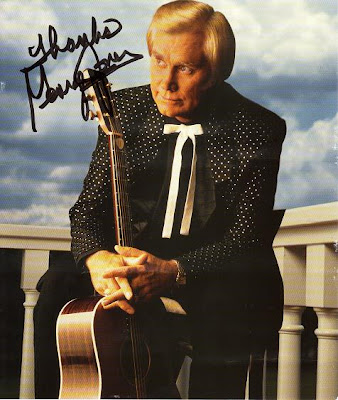 He Stopped Loving Her Today

Written by R. V. Braddock and C. Putman, Jr.
He said I'll love you 'til I die
She told him you'll forget in time
As the years went slowly by
She still preyed upon his mind
He kept her picture on his wall
Went half crazy now and then
He still loved her through it all
Hoping she'd come back again
Kept some letters by his bed
Dated 1962
He had underlined in red
Every single I love you
I went to see him just today
Oh but I didn't see no tears
All dressed up to go away
First time I'd seen him smile in years
(Chorus)
He stopped loving her today
They placed a wreath upon his door
And soon they'll carry him away
He stopped loving her today
(Spoken)
You know she came to see him one last time
Oh and we all wondered if she would
And it kept running through my mind
This time he's over her for good
(Repeat Chorus)

Legendary country music star George Jones died today at the age of 81. He was (and always will be) my absolute favorite musical artist. He had no peers in his field. His voice was unmistakable. I can't count the number of times I saw him perform since the first time I attended one of his shows in 1973. It was at a big ol' dance hall/bar in northside Houston on bad-ass Airline Drive called the Cedar Lounge. It's still there.

After that show I saw him all over Texas, sometimes a friend and I would travel to take in a couple of shows around southeast Texas on consecutive nights. And even when he was a bit 'off his game' he was a treasure to listen to. From bars to dance halls to concert halls I never regretted going to a George Jones show. Even when he was less than sober he could make chills run down your spine and bring the women in the place to tears. My friend, who was also my boss back then, had grown up near Saratoga, Texas around the time Jones was starting out. That's how I was lucky enough to meet him a time or two.

I don't have much music memorabilia. Just a few cards (which I posted here), some ticket stubs, and a few pictures like the one above. But all of it is George Jones memorabilia.

"If we all could sound like we wanted to, we'd all sound like George Jones."- Waylon Jennings