I'm edging ever closer to finishing my 1960 Topps manager subset. These are really fun cards from a set that is the first that I ever really collected and have vivid memories of. I really like the gold/mustard color used on the backs. 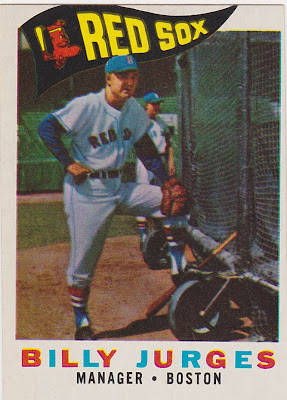 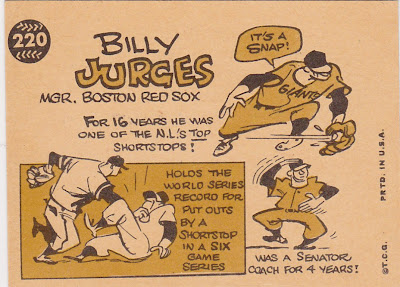 Billy Jurges only managed 122 games for the Red Sox in 1959/1960. He had a record of 59-63. But he did get to pose in Fenway Park leaning on the batting cage in dapper style with a glove on his hand for a Topps card. That has to count for something. But he was a three time All Star for the Cubs and Giants during a solid 17 year playing career. 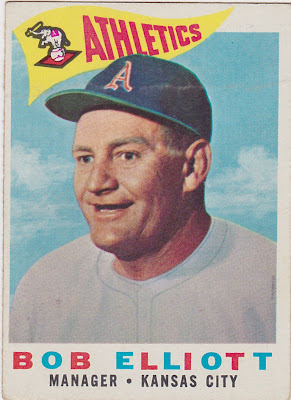 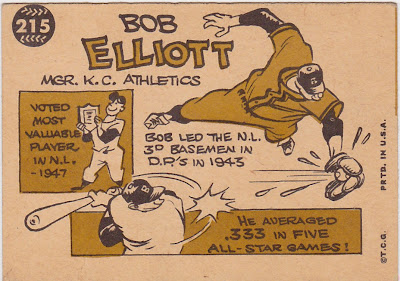 Bob Elliott only managed one season, 1960 for the Athletics, and his club finished eighth, but he had a long and successful playing career. He was seven time All Star third baseman while playing primarily for the Pirates and Boston Braves. He was the NL MVP in 1947 with a stat line of 22/113/.317 and he garnered top ten MVP placement twice more. Plus, he looks like my Uncle Gerald.

I'm down to needing five of the 16 managers cards out of the '60 Topps set. I may also try and nab the coaches cards. I remember how big of a kick me and my friends got out of the 'old guys' floating heads on that subset.

I'm just afraid I might be tempted to complete the whole Topps set. Hey, I love projects, but I'm not up to another full vintage set at the moment.