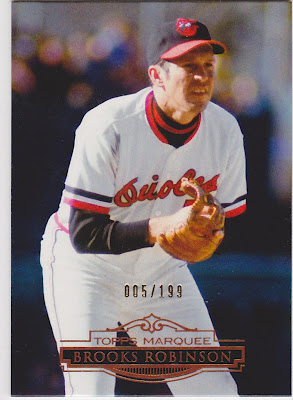 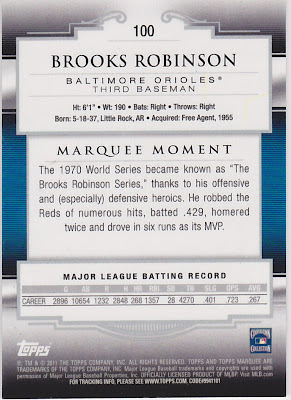 I frequent a collectors forum, Trading Card Zone. Most of the cards I own are older than most of the members over there but that's OK. I don't mind being the 'old fart' who waxes nostalgic about vintage while they oooh and aaah over the latest and greatest sparkly/shiny autographed relic hits. They are nice guys.

Anyway one of the mods asked a question... "Would you pay a premium for a 'numbered' card that has the number which matches the player's uniform?" I bring that up because I had on my desk, in my ever growing pile of 'stuff', this 2011 Topps Marquee featuring Brooksie that is numbered #5 of 199.

I have no idea where I got it, and I'm sure I never paid attention to the number. I will tell you that I probably picked it up because I like the nice glossy picture they used and the fact that while Brooks in in a familiar pose this is NOT a picture that I've seen over and over like some of the recent cards of him that I come across.

There is also the chance that someone out there sent me this card. I think I would remember if that was the case because I don't get a lot of packages. But if it came from you, gracias. It's a sweet card, no matter what it is #'d.

Posted by Commishbob at 4:00 PM