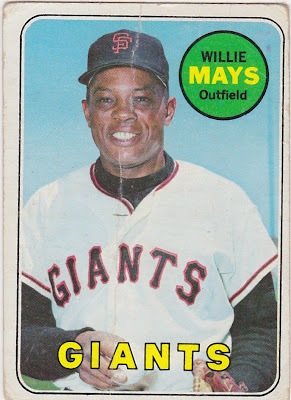 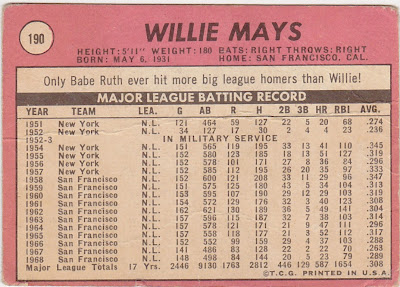 It's my original 1969 Topps Willie Mays card. And if you can look past the horrendous crease down the middle,the soft, frayed corners and the fact that it is seriously mis-cut, I think you'll agree it's a beautiful card.

Willie looks sooo Willie-like on this one. His patented smile (OK, he doesn't smile at signings much these days but he used to be known for it), the history laden Giants' home shirt, the way his glove, even though mostly out of the frame, it tilted towards the sky, ready for a Mays 'basket catch'. Topps obviously didn't have their design people spend months on the 1969 set. It's pretty ho-hum, and the color of the backs is pretty bad, but some cards are classic. I think this is one.

And the back, with it's 'wall of (amazing) stats', made for endless study for a stat maven like I was back in the day. The one text line heralds the fact that, at that moment in time, Willie was #2 to the Babe in career homers!

From third grade onward I was best friends with a Giant fan who came from a family of Giants' fans. So I saw Mays play at Shea on several occasions. I also saw the Giants play the Mets at the Polo Grounds in either '62 or '63. I don't recall a lot other than the place seemed huge (even to a kid who was used to the vast Yankee Stadium), and it seemed dark. But I saw Willie Mays play, in the place he made his most iconic catch. I know because I checked and he made every game in New York in those two seasons.
Posted by Commishbob at 7:00 AM