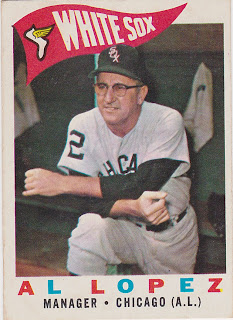 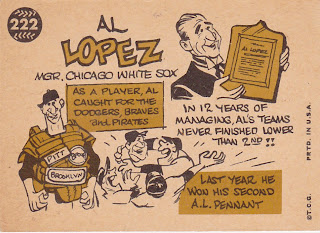 OK, according to Babelfish the title of this post is a translation of  "Two Cards of Baseball Managers". My wife, a Spanish speaker said "No, it's not, really". Well, it's a stupid idea for a post title but I thought it up because I had two cards of managers who were bilingual. Al Lopez, son of Spanish natives whose family immigrated here by way of Cuba spoke fluent Spanish. Casey Stengel, a native of Kansas City, spoke fluent... hell, I don't know. But whatever it was was usually pretty entertaining.

Here is something remarkable about Al Lopez as a manager. Between 1951 and 1965 his clubs, first the Indians, then the White Sox, only finished lower than second in the American League three times. That's 12 second place finishes in 15 seasons with the outliers being a third, a fourth and a fifth coming in consecutive seasons, '60 thru '62. That's only one season finishing in the second division*.

He won a pennant with each of the franchises he managed and was a pretty darn good ballplayer during his playing days as well. In 19 seasons as a catcher he made a couple of All Star squads.

He looks particularly managerial on the 1960 Topps card, doesn't he? 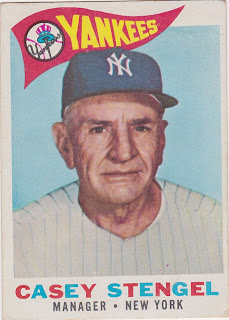 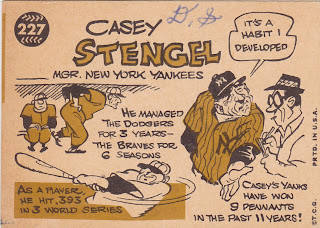 Casey Stengel was really one-of-a-kind. His record as manager of the Yankees speaks for itself. In 13 seasons with the Dodgers, Braves and Mets he never finished higher than 5th. Make of that what you will.
Casey, who had aspired to the field of dentistry growing up (think about that for a minute), was a good outfielder with several NL clubs and, as the card notes, he hit well in his three World Series appearances.

Here is my odd Casey fact...  "The Old Perfessor" coached the 1914 Ole Miss baseball team while just in his third year as a major league player. Read a lot more about Casey here or here or here.

Both Al Lopez and Casey Stengel at members of the Baseball Hall of Fame.

*="2nd Division" is how each league's bottom half finishers were refered to back when each league had eight or ten teams. You remember those days, don'tcha?
Posted by Commishbob at 6:00 AM