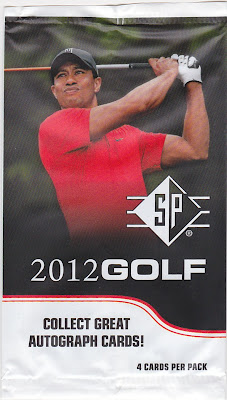 I play golf, though not very well. And hitting a bucket of balls at the range is a nice way to relax, at least for me. I even build and repair golf clubs. All of the clubs I play are ones I've built.

And I watch golf, sometimes. I'm out at the Shell Houston Open every year (my sister-in-law is a Shell exec) and I watch on TV if it's the final round of the Masters. And that's today. Normally I'd block out a couple of hours to watch the last of the tournament, especially since my cable provider has a crazy good Masters set-up where we can choose which hole or group we want to concentrate our attention on.

But sadly none of my favorites, none of the guys I'd be interested in watching, are in contention. Fred Couples and K. J. Choi shot themselves into also-ran status on Saturday. And Phil Mickelson and Ernie Els made the cut but were never threats.

So I can do my taxes without much interruption. Oh happy day.

Yesterday I was at Target and went to the card aisle, of course. I thought I might buy a pack of something other than 2013 Topps (I already bought one of those) but they didn't have anything that interested me other than a box of Upper Deck SP Golf. I hadn't bought any golf cards since the hey-day (if it could be called that) of the Pro Set golf sets back in the early 90s.

I picked up a pack and opened it this morning. Nothing at all to get excited about. Just four cards including one of an LPGA player. I hadn't even registered the fact that the pack was marked '2012' although it wouldn't have mattered much, they are golf cards after all.

The cards themselves are pretty nice. Thicker than normal cardboard with clear pics and a pleasing design. I did get one of a Masters winner, Zack Johnson. He hasn't been to Houston since his 11th place finish in 2004. So I have no love for him. 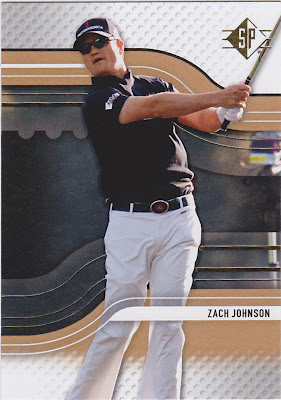 Johnathan Byrd missed the cut in the last couple of Houston Opens but he did finish 14th about four years ago. 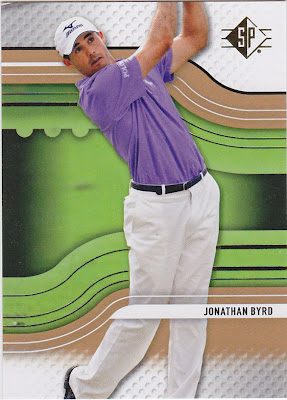 John Mallinger also missed the cut this year here in Houston but he has a 6th place finish to his credit. I didn't scan the front of his card because I wanted to show one card back without having to make two scanner 'runs'. My stupid scanner only will do four images at a time. 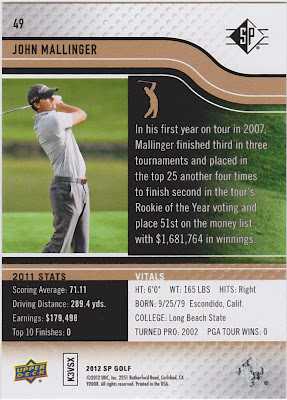