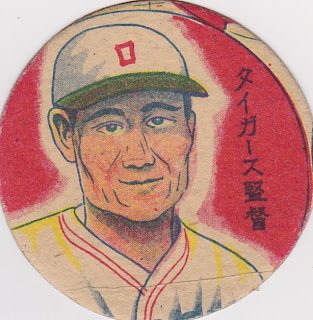 The Menko card above (from a set known as JRM 20) is of Tadashi Wakabayashi, two time Japanese League MVP and a Hall of Fame pitcher who was a second generation Japanese-American born in Hawaii. It dates from 1948, late in his career when he was serving as a player manager of the Osaka Tigers. What looks like a serious crease across the bottom of the card is a surface wrinkle that my scanner chose to highlight (as well as slice off the sides).


This next Menko card also comes from 1948 and a semi-related set cataloged as JRM 26. The similarities are pretty obvious. There are several similar sets issued the same year and all vary just a bit in the background. The pictured player is Hideo Fujimoto. He is also a Japanese League Hall of Famer. He holds the career record for lowest ERA and lowest one season ERA. Like Bozo he also managed late in his career. Fujimoto was born in Korea, moving to Japan when he was eight. 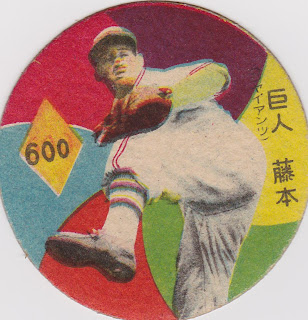