Portugal, and my Grandfather 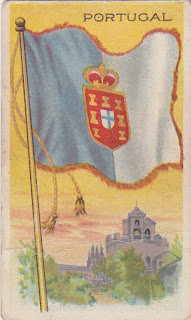 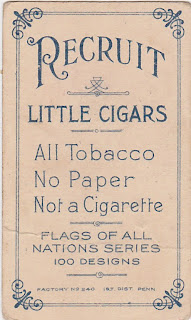 Being 25% Portuguese I couldn't resist nabbing this card from the T59 Flags of All Nations set issued around 1910. It features the flag of Portugal and set me back 49 cents. Pretty hard to pass that up. 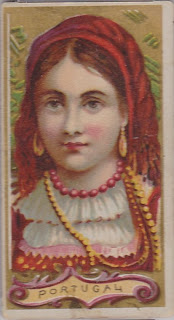 The card above is from the N24 1889 Allen & Ginter Types of all Nations set. I got it cheap as well. I bought it because there is a chance that the woman pictured is my great-grandmother. Only a slight chance I grant you, but a chance. OK, there is no chance but hear me out.

My fraternal grandfather was born in the Azores in 1902, the Azores being a group of islands in the North Atlantic that were a Portuguese colony and are still an autonomous region of Portugal. His father was a native of those islands while his mother came from Portugal itself. While still an infant his family emigrated to the United States, passing through Ellis Island where the family name was changed from Andrade(?) to  Andrews, and settling in the large Portuguese community in New Bedford, Mass. When his father died about ten years later my grandfather and his siblings (we really don't know much of them) returned with their mother to the Azores.

Having seen the U.S. my grandfather wanted no part of living on what is essentially a volcanic island and decided to head back to the States. So, at the age of 13, he stowed away on a ship bound for the U.S. and soon found himself in Key West. He worked at various waterfront jobs as he made his way up the East Coast and eventually was back in New Bedford.

Now about 15, with his adopted country entering WWI, he 'lied' his way into the Army and found himself as a infantryman in the U.S. 2nd Division in Europe, fighting in France as a 16 year old. Along the way he suffered the effects of German poison gas attacks and various other wounds. His helmet, which, I have here at home, shows a dent he told me came from a German bullet.

After the war he was sent as part of the occupying forces to Germany and was assigned to a German farm house near Heidelberg which was home to a farm family. My grandmother was a part of that family and despite a language barrier the two fell in love. My grandfather returned to the States, eventually sent for my grandmother (and her mother), and they were married.

He spent his life as a boilermaker in the Brooklyn Navy Yard, a tough job for sure. As a preschooler I and my parents lived with my grandparents in Brooklyn and I can recall my grandfather returning from work, with grime and soot from had to toe and walking me to the corner store on Kings Highway for a treat before he bathed and we all had dinner. Later on he taught me how to curse in Portuguese, how to sharpen knives and how to wear a hat among other useful lessons. He died in 1970. Hell of a guy.

So, since this card was designed in the mid 1890s, and someone had to pose for it, I'd like to think it was my great-grandmother. 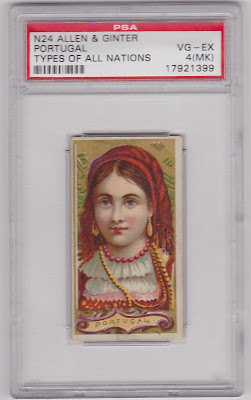 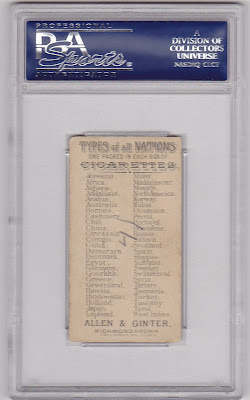 And here, displaying the results of being forced to dress up for Christmas by my Grandmother, is Pops. Circa 1955. 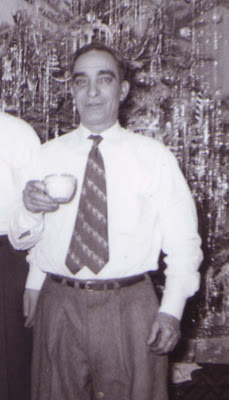