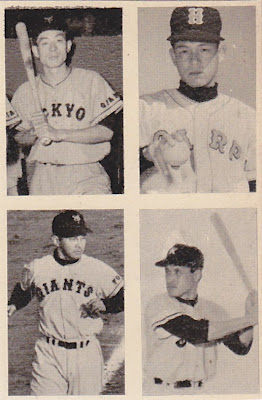 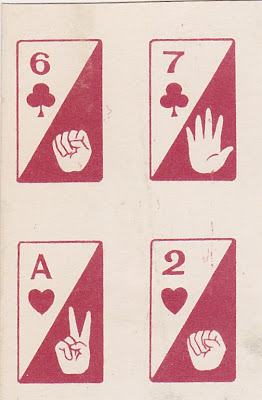 At it's simplest the difference between Bromides and Menkos is that Bromides are photos printed on photo paper while Menkos are cruder, usually hand-drawn cards that are much more colorful. That's a very broad generalization but accurate to a point. The featured card is a '4 in 1' Bromide card which is from the set classified as JBR3 1960 Doyusha Black and White. There is a corresponding Color set. Doyusha appears to be a hobby company which currently markets scale model planes, tanks, science toys, etc. The reverse has playing card elements.

This Bromide features four Japanese players who are, clockwise from upper right:

Kiyoshi Oishi... he started and relieved for nearly two decades for Hiroshima. In 1962 he led all pitchers in losses, walks and homers allowed. Ouch.

Morimichi Iwashita... he played for three teams from the early 50s through the early 60s. Not much on the 'net about him.

Wally Yonamine... a fascinating figure who played in the AAFL for the 49ers as well as Japanese baseball. He was a Japanese American born in Hawaii and became known as the 'Jackie Robinson' of Japanese baseball due to the resistance he received as an American. I have Robert Fitts' acclaimed book queued up in my reading rotation. He's a member of the Japanese Baseball Hall of Fame having had a sterling career as outfielder and manager until his 1988 retirement. Lots more on this website.

Tatsuro Hirooka... another Hall of Famer he played as a shortstop and managed before becoming GM of the Chiba Lotte Marines and was well known for firing wildly popular manager Bobby Valentine in 1995.

I've scanned the card next to a current Topps card for size comparison purposes. 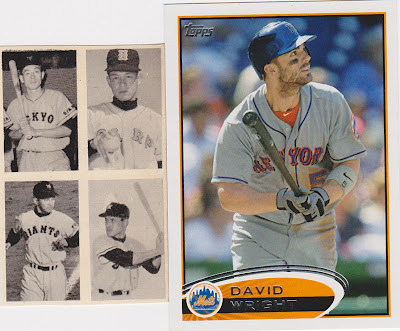