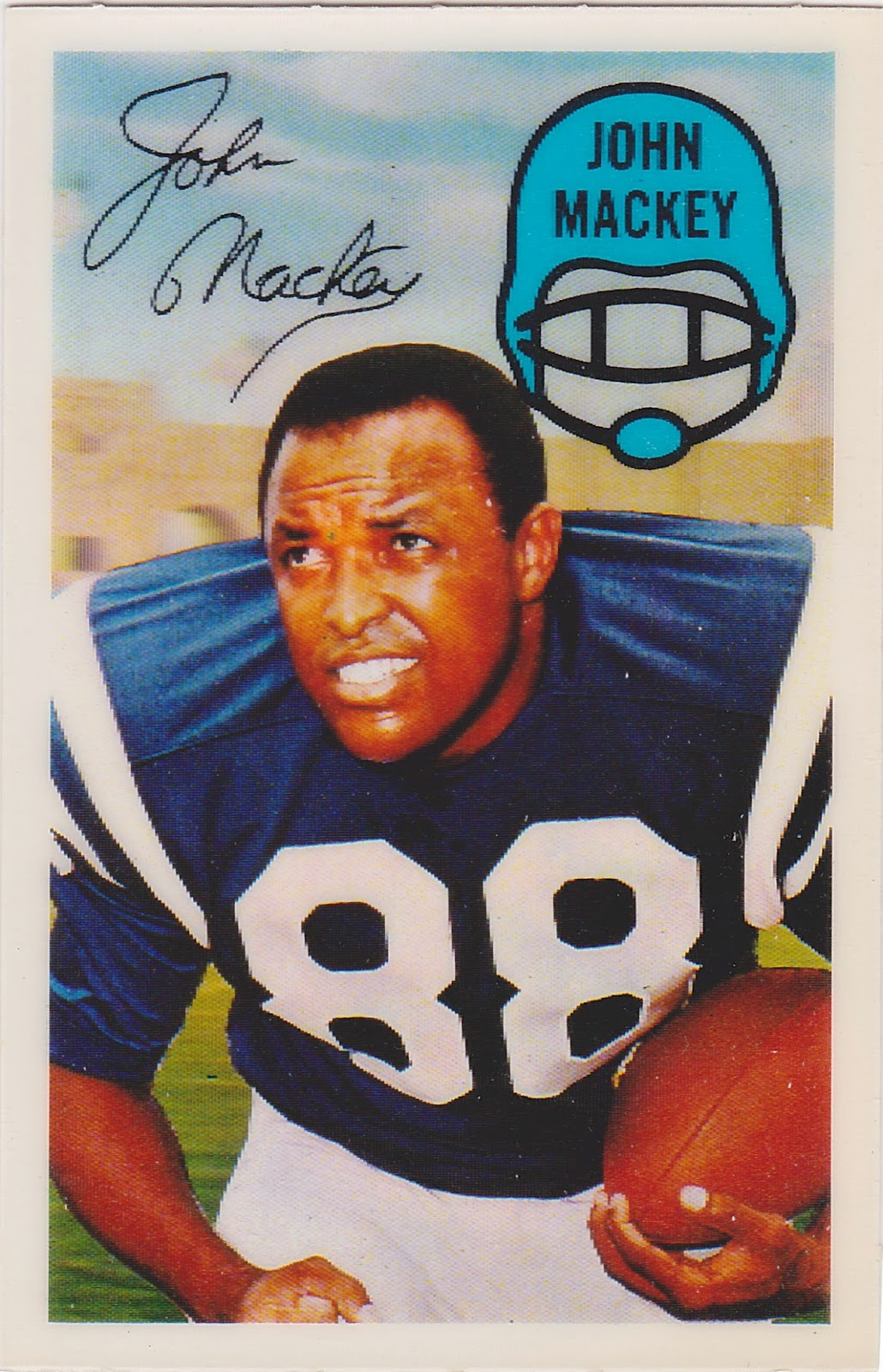 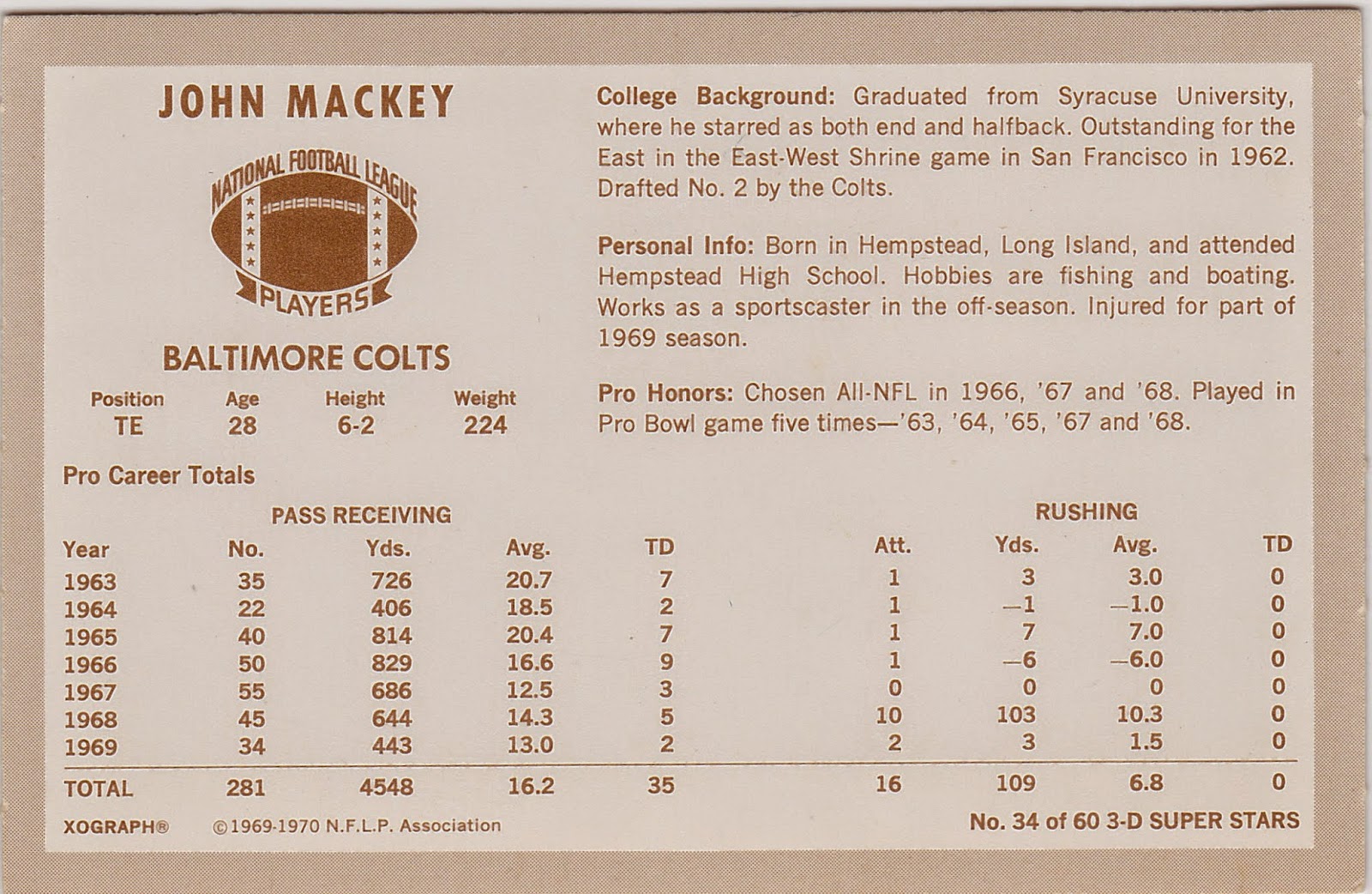 The '70 baseball versions were the first 3-D cards for Kelloggs and the football versions are very similar. The set consisted of 60 cards. They were found in cereal boxes AND available through a mail-in offer. John Mackey, John Unitas, Bubba Smith and Tom Matte are the Colts in the set. I picked them up in one transaction recently and they are in generally good shape. They are all curled as you would expect, Kelloggs cards of that vintage all seem to do that. Only the the Unitas card has the usual Kelloggs cracking although they are not as noticeable in hand as they are in the scan. The Matte and Smith cards each have a tiny crack on the upper left only. The corners are sharp.

The cards have a nice write-up on the reverse and a very limited stat summary. They also add a listing of the player's 'Pro honors' i.e. All Pro, All NFL, etc. That's a nice touch. There are no team logos and the copyright credits the NFLPA.  I'm not sure about the Matte card but Unitas and Mackey are shown against a background that is Los Angeles' Memorial Coliseum.

Here are the rest of the Colts: 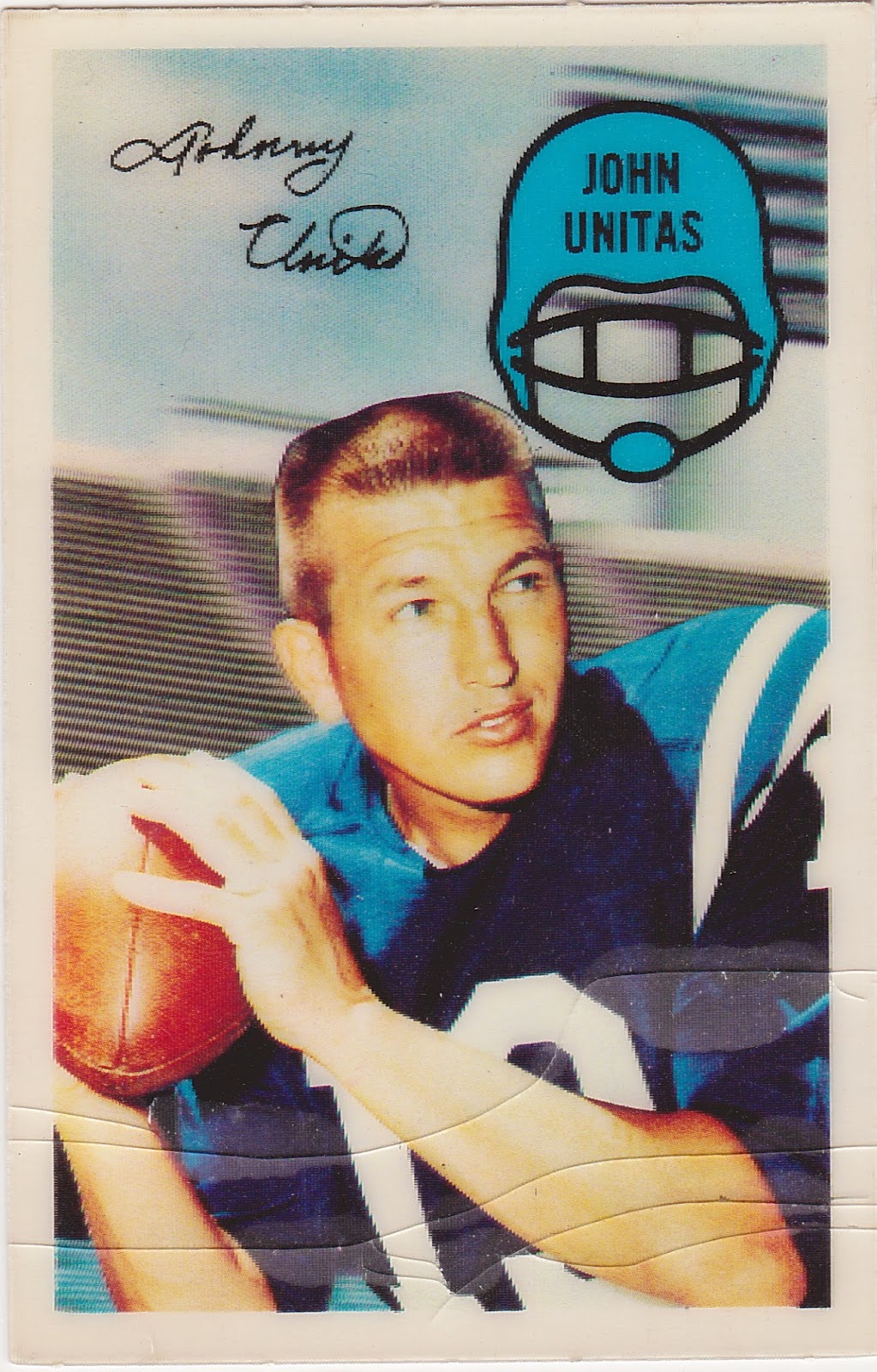 The Matte card may be my favorite of this set since it's not a picture I've seen before. 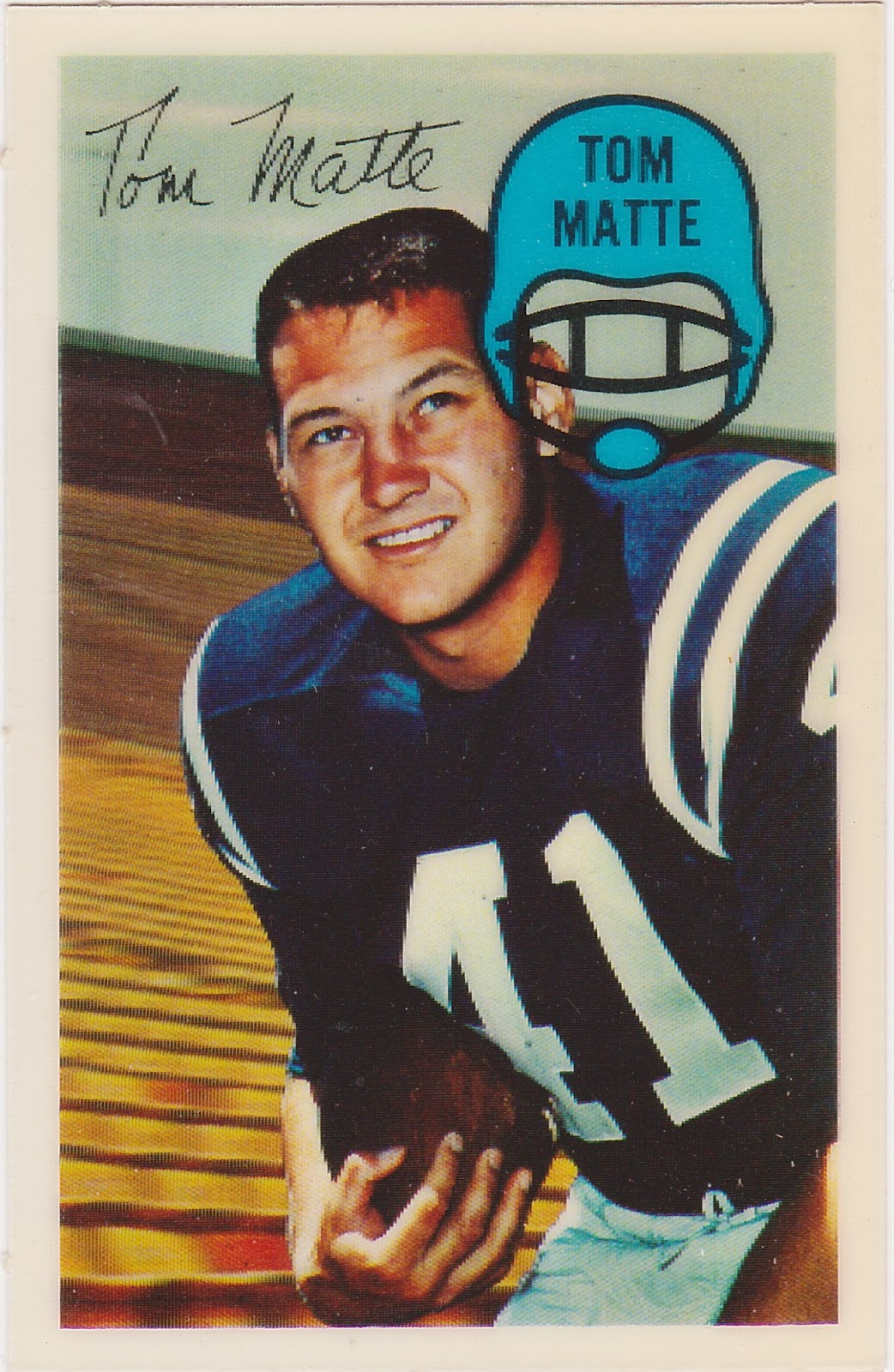 This Bubba Smith shot proves that Kelloggs got their pictures from Topps. 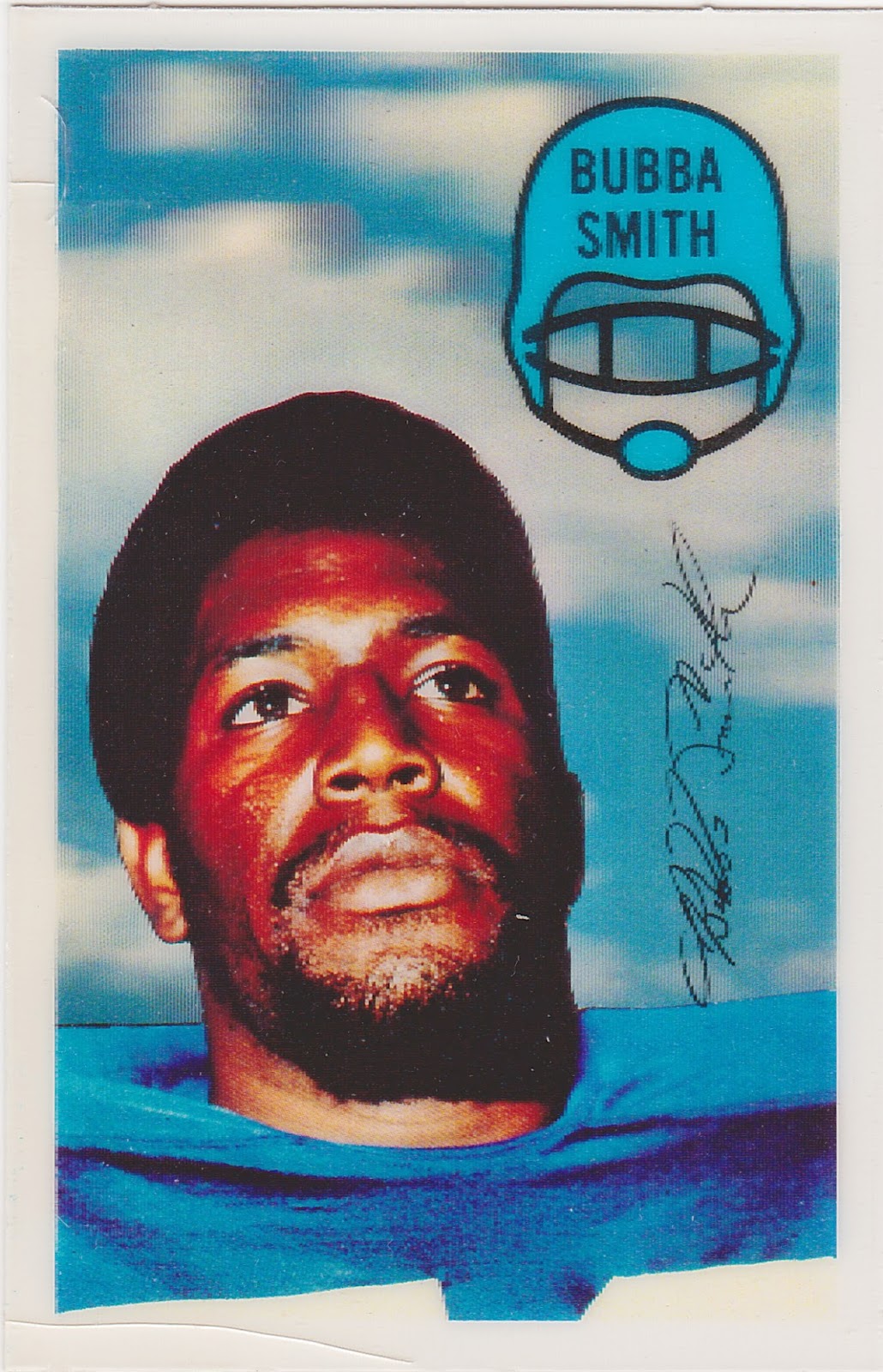 Kelloggs' football cards returned in 1971 as another 60 card set. Only Johnny Unitas is a carryover player from the '70 set. In fact only five players total from the 1970 sets were repeated in 1971. And the '71 cards are scarcer due to the fact that they were not available through the mail, only in cereal boxes. I had bought a '71 Mike Curtis card from an online dealer but the dealer refunded my money because they discovered the card was too severely cracked.

So the hunt for the '71 Kelloggs Colts continues.