Goodbye for now, and Thanks

I'm the husband of a woman of color, from a family of immigrants. I'm the father of three great kids, obviously of mixed race. One, my incredible daughter, is gay. She works in Chicago as a social worker and tireless advocate for the elderly. She does great things every day and she's my hero. Right now I'm worried about what their future holds.

As for myself... I've spent most of my adult life teaching and coaching young people at economically disadvantaged schools and trying to be a positive influence on them. I think I've succeeded for the most part. I am worried about these kids, too.

On Tuesday we as a country, a country I love deeply, elected a man without character or compassion, as our next president. It's been difficult for me, over the last few days, to sit here and try to write about sports cards when the only thing I really have on my mind is the kind of country we've become. How the hell did we get to the point where this contemptuous "man" is about to represent us on the world stage? To paraphrase John Oliver...look up, waaay up...see that spot waaaaay up there? That used to be rock bottom.

I swore I'd never write anything political here in what I've always hoped would be a fun diversion for me and maybe a reader or two. Right now I'm struggling to even type this. I certainly can't put effort into a card post. I don't see that changing for awhile.

I've 'met' really good folks and made some friends through this blog and for that I've very very grateful. I may try to update my 1958 and 1960 blogs as time goes by. I may even come back here and kick-start things if I get the urge.

I'll end with this video of the late Leonard Cohen's incredible Hallelujah by the equally incredible kd lang. There are some amazing renditions of this song out on the web. Maybe the most compelling is by Alexandra Burke but kd's means the most to me. Please give it a listen. And thanks so very much for reading. 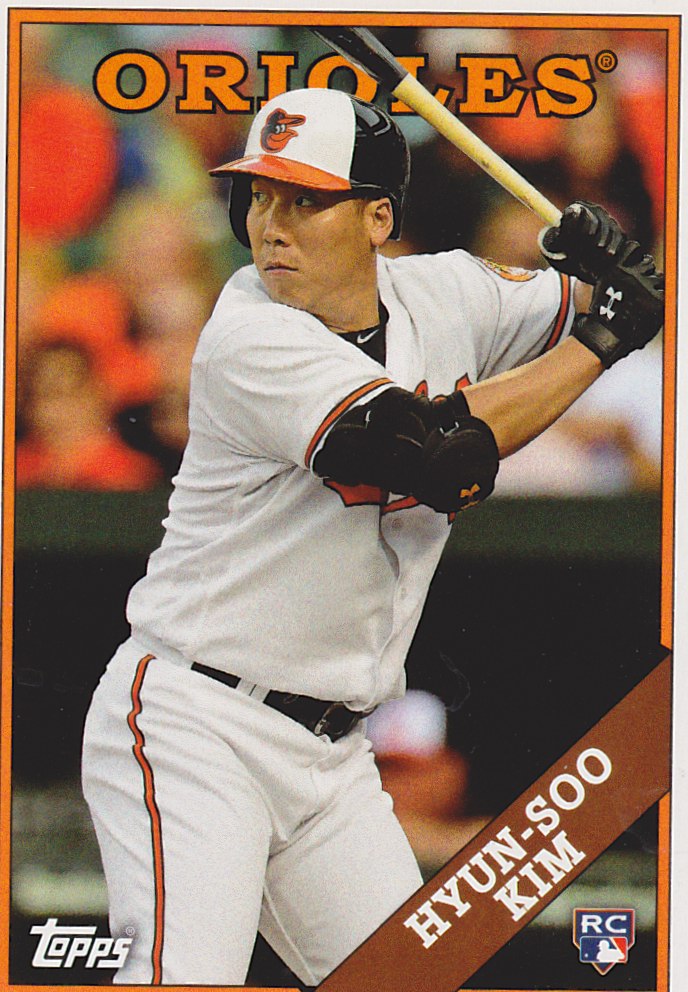 The day after I received Night Owl's envelope I got one from Mark "Friend of Everyone's Blog" Hoyle. It was like a mirror image of NO's in that it had some 2016 late release stuff and some off the wall vintage.

The border-less (a scanner victim) Hyun-Soo Kim card goes directly into my fantasy baseball binder. I've been needing a 'real' card of him all season. It replaces a World Baseball Classic one I found somewhere. A mainstream card in the player's actual MLB duds trumps a WBC oddball. 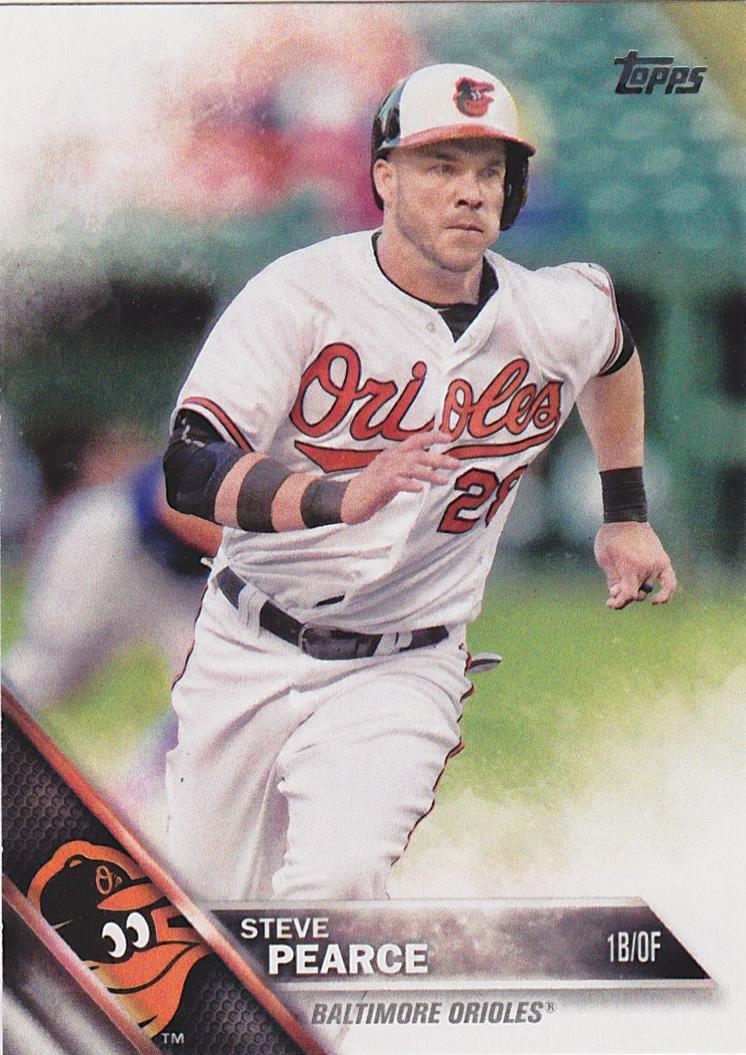 The O's picked up Steve Pearce late in the summer (at the deadline? I forget) but he was hurt and never really contributed. Nice card though. I needed it for the same reason as the Kim card.

Next up... a 1989 Fleer Prospects card with an Oriole. I always liked this set. It contains the infamous Billy Ripken bat knob obscenity card. Boy, was that a huge deal for awhile! This one is more routine. 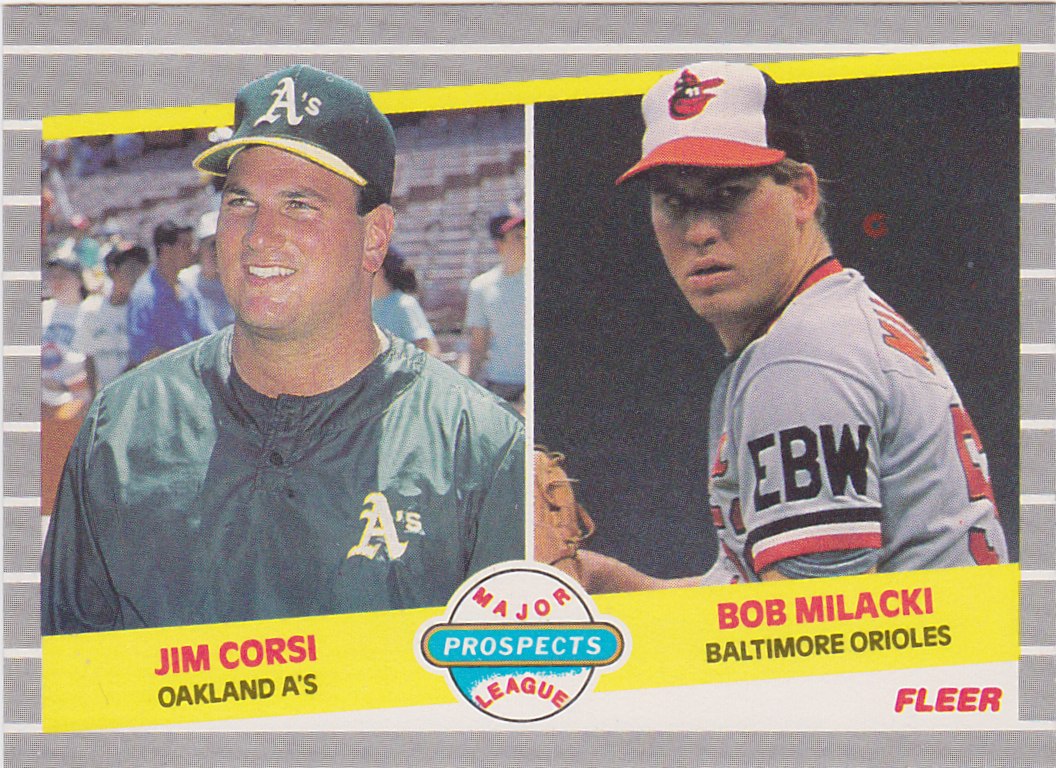 We have Bob Milacki alongside football coach-lookin' Jim Corsi of the A's. Milacki was taken by the Orioles in the June, 1983 draft. that's the same month I got married. He won a couple of games for the Orioles at the end of the 1988 season. That was no mean feat given how the 1988 Orioles were so utterly terrible. And that's being kind.

But he was a 14 game winner for the 1989 "Why Not?" Orioles who finished second in the AL East and were in first place as late as the eve of September. That clunky "EBW" on Milacki's sleeve is the memorial for owner Edward Bennett Williams. I never realized what a great owner he was until Peter Angelos came along. 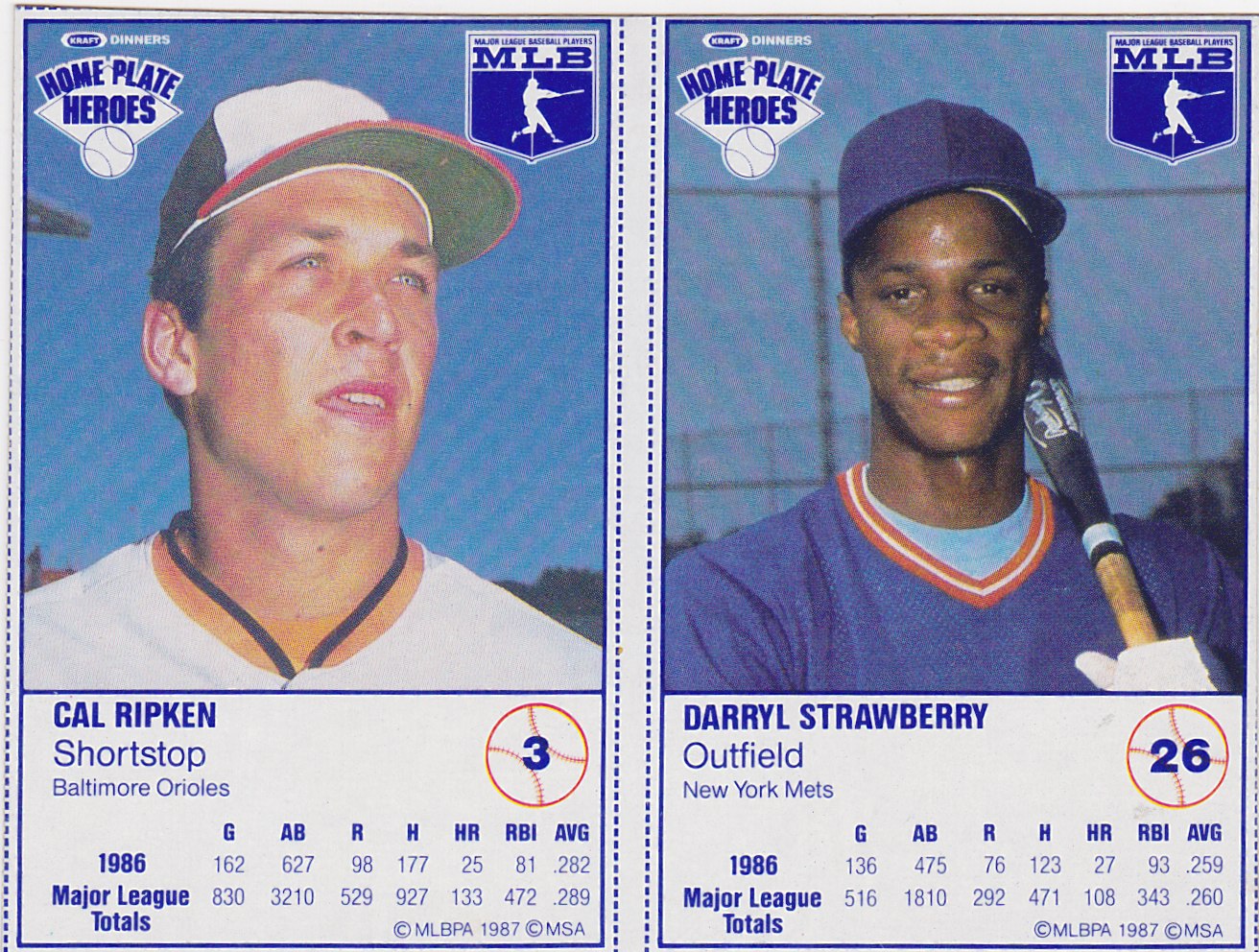 These Kraft Home Plate Heroes cards came on Mac'n'Cheese boxes. We went through a lot of this stuff back then as my kids were growing up but I don't think I nabbed the Ripken. Two things I do know...I never kept the two cards intact, especially if an Oriole was involved...he was cut and put in a 9 pocket. And secondly I never cut the panel as neatly as this. My 1980s  food container and box bottom cutting skills didn't improve from when I was slaughtering Post Cereal cards twenty years prior.

Cal Jr. and Darryl Strawberry are definitely on odd couple to be sharing a panel. Hey, an Oriole and a Met...makes this something that would fit perfectly in Joe Shlabotnik's collection. And I've wondered from time to time about these food and retail issues that are logo-less due to lack of MLB licencing but list the teams' nicknames. What's different now with Panini unable to use either?

Finally here is a 2016 Topps Update card of my free-swinging pal, Chris Davis. Topps proclaims him as a future 500 Homer Club member. He's at 241 right now, and he's 30. I'm a big Crush fan but I'm thinking that another 259 is a longshot. I hope I'm wrong as the O's have a lot invested in him.

But either way it's a nice card of him. His swing and reaction to a blast are both distinctive. He's worth the price of a ticket even when he's off his game. 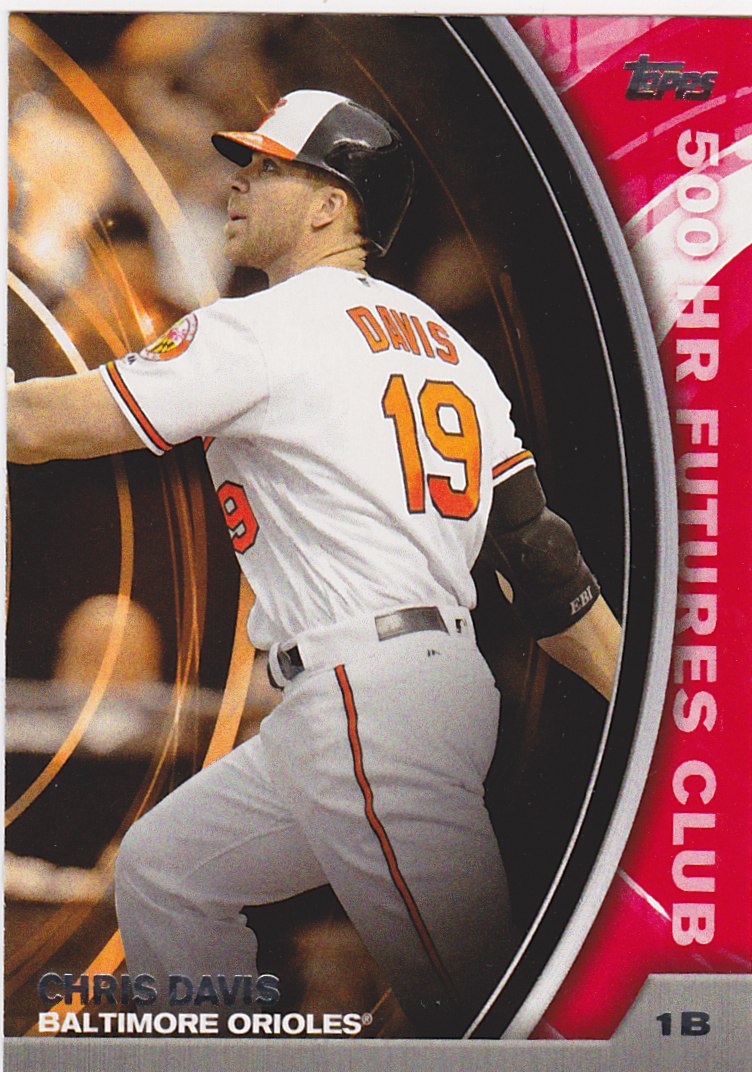 Thanks again, Mark. I appreciate the cards very much. Those of you with a Twitter account should follow him at https://twitter.com/Markhoyle4  Mark posts a lot of neat stuff there.

Night Owl To The Rescue 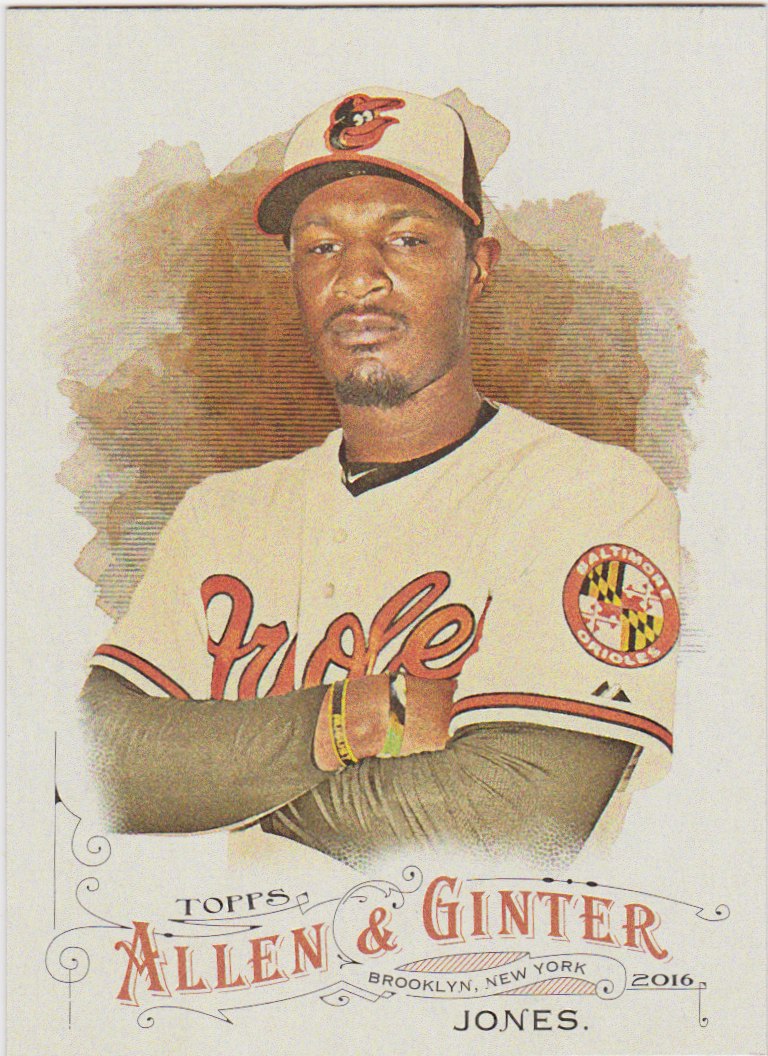 I've really let this blog go to hell in a handbasket. I just haven't had much to blog about as I've been concentrating on chasing the 1958 Topps set. October was the best month of the year for card shows in Houston and I missed all of them. And the new stuff I've bought, a couple baseball and football packs, have been very uninspiring...lacking any Orioles or other cards of interest.

So getting a nice fat manila envelope addressed from Western New York was a welcome sight the other day. Night Owl had filled it with a stack of fancy and not-so-fancy Orioles. Most from 2016 and many from sets I never have any interaction with. I mean I know Topps Chrome exists because I see people post it on their blogs but does it come in packs? Boxed sets? Semi-inquiring minds want to know.

Up top Adam Jones strikes a serious "I'm a bad dude" pose. Usually he's grinning like a kid. I have a hard time telling this year's A&G cards from any previous year's A&G cards. But that's on me. I'm more than happy to add another Jones card to my current O's binder.

Chris Davis watching another dinger fly out on a Topps Opening Day card. I actually found a pack of Opening Day last year but other than that I've never seen them outside blogs and the packs on card dealer tables at shows. 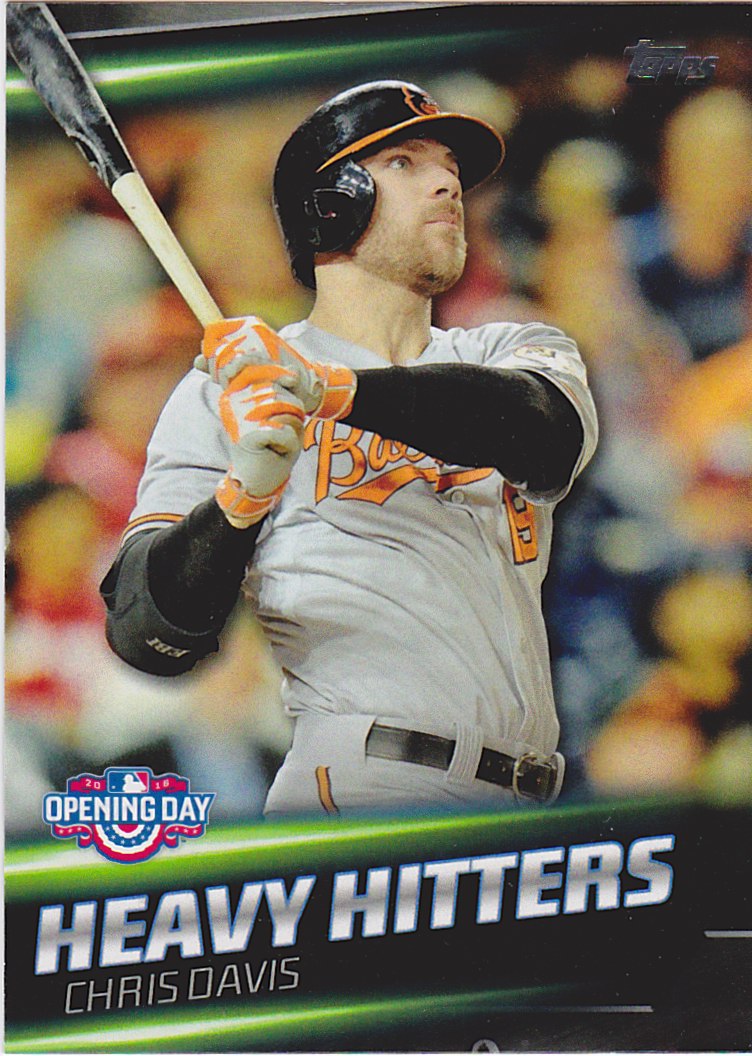 Jones again, from Heritage. I bought some Heritage in packs...no Orioles. So this and the Macho Manny Machado card below are welcome. 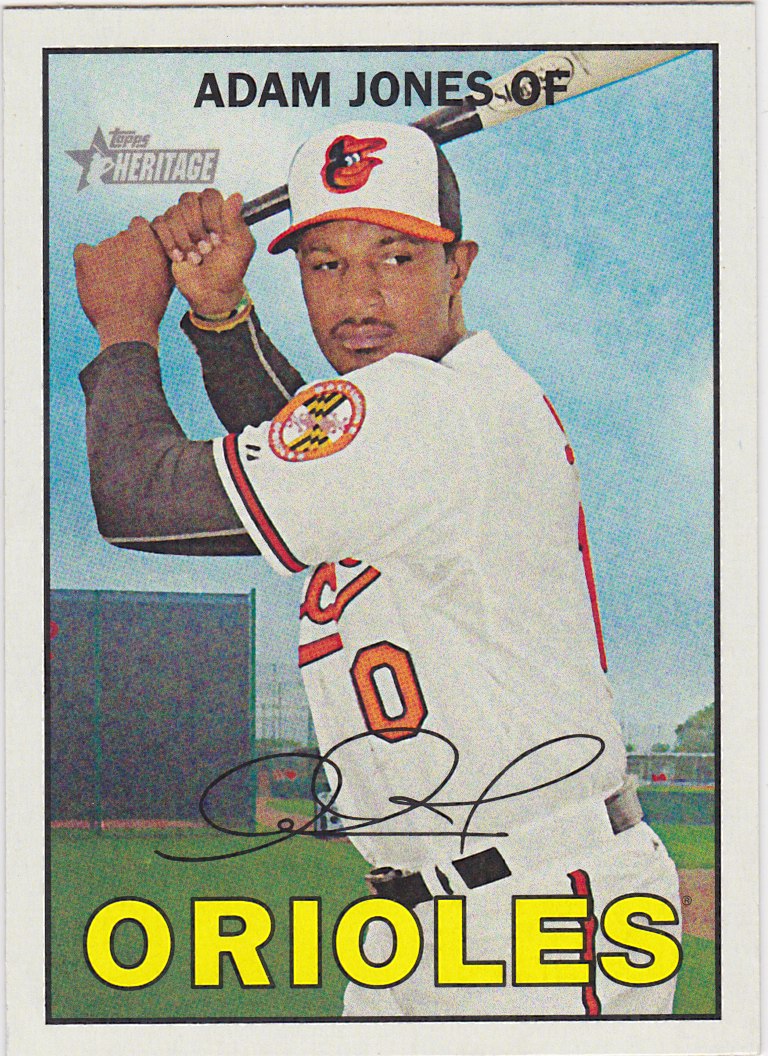 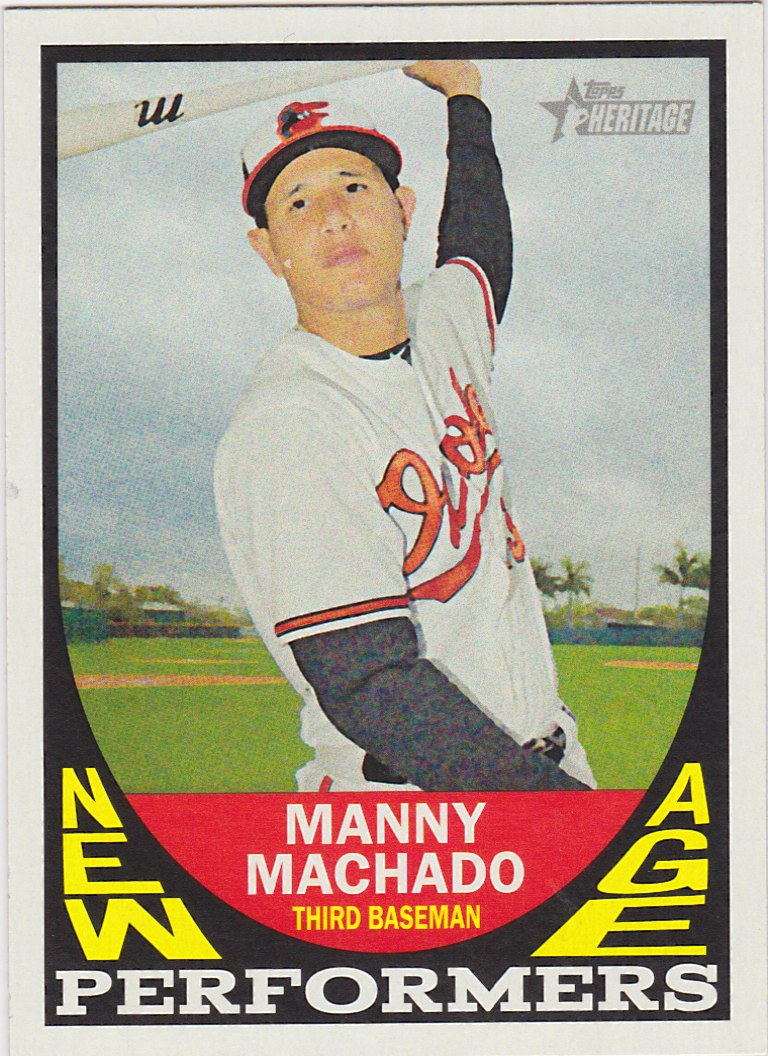 And then there are these two Topps chrome cards. Not only are they shiny and a bit warped as all the best chrome cards are..they have pink elements! I love pink cards. 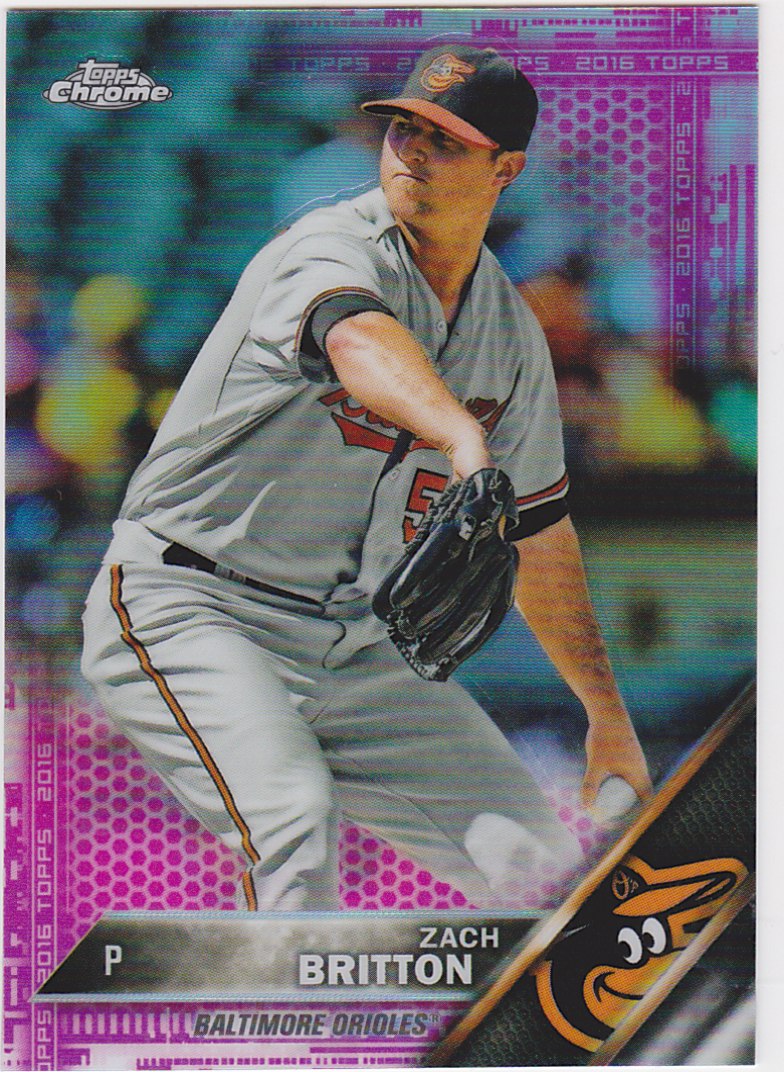 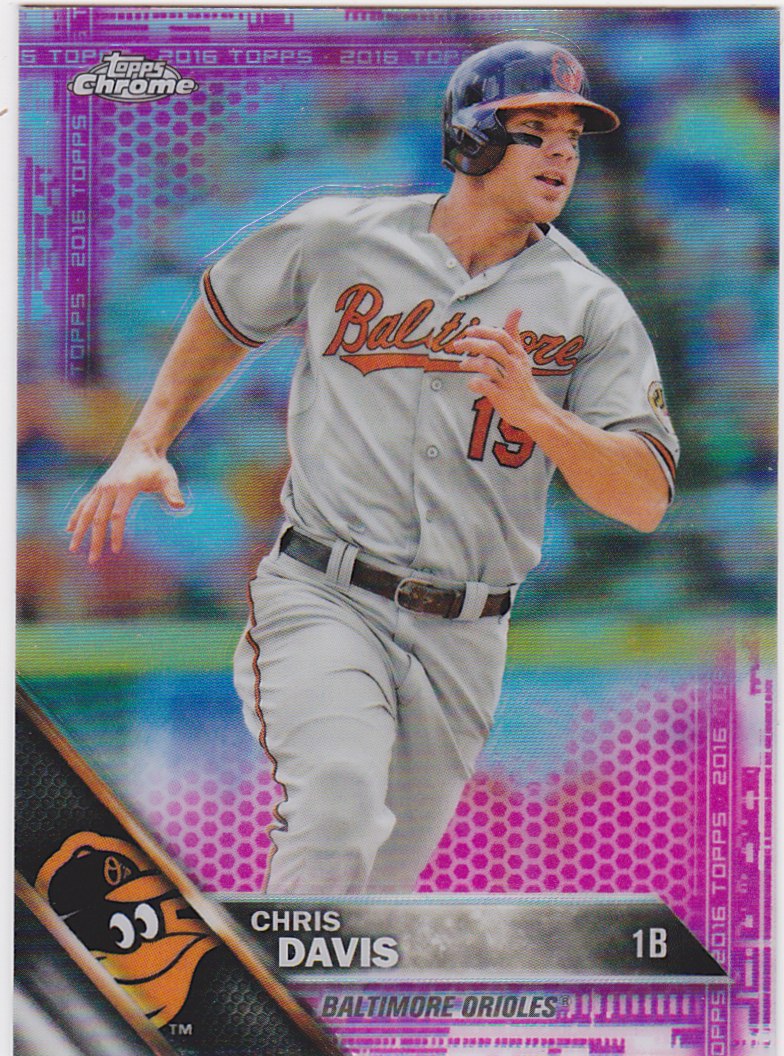 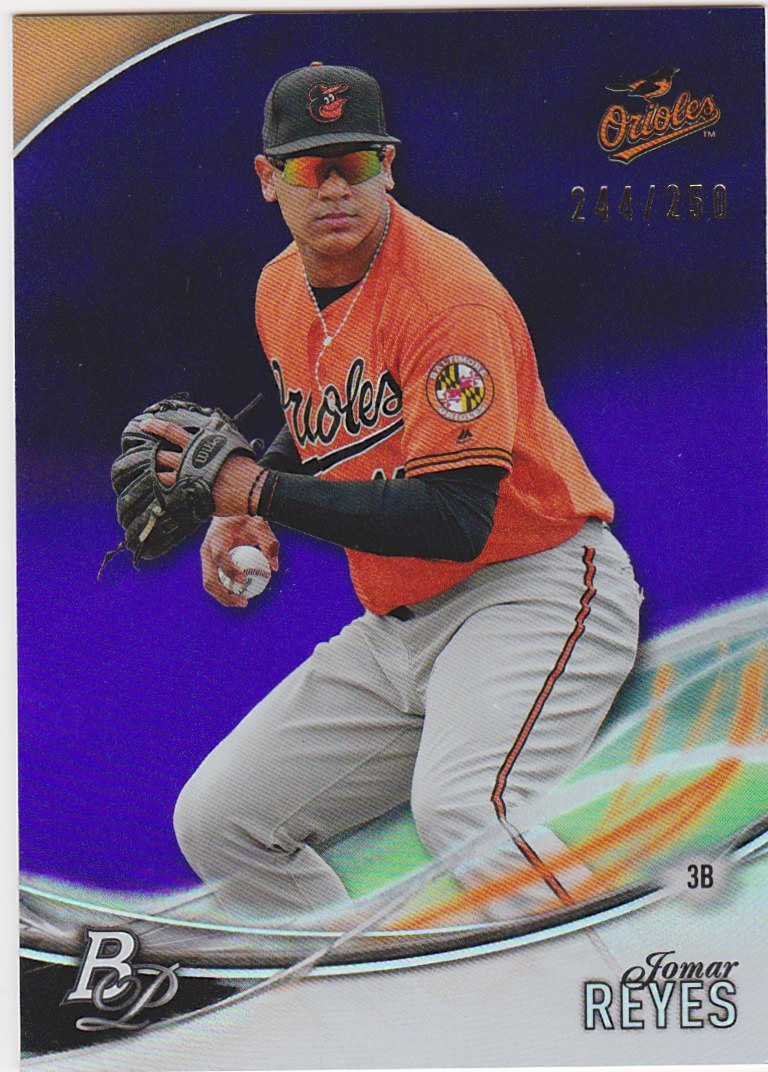 Shiny Bowmans of Jomar Reyes and Dylan Bundy. Bundy was the 'eternal prospect'. And finally in 2016 he got a season in Baltimore. He didn't tear the league up but I thought he did OK. I don't know anything about Reyes. 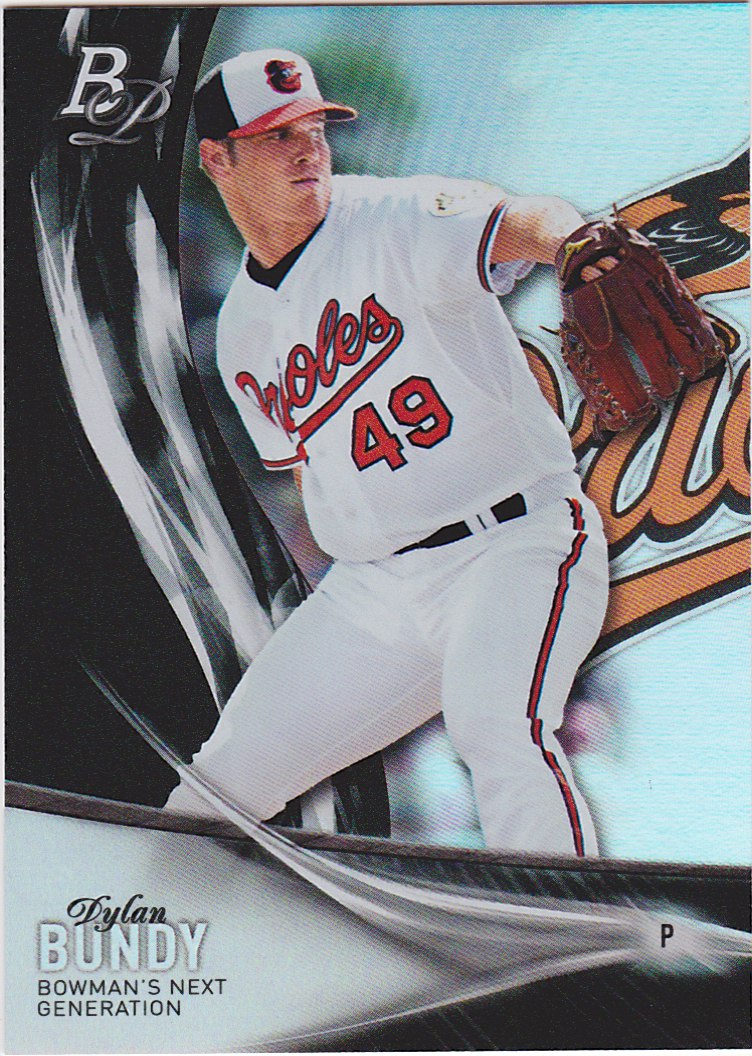 I think this Odrisamer Despaigne card is from an update set. I remember looking for one of him on the O's this summer for my fantasy player collection (yes, I had pitching issues for awhile) and only finding a Padres card. He's one of those guys who pulls his cap over to one side of his head. Seems to me to be a pitchers 'thing'. When I was playing (many) years ago I pulled my cap as low as I could over my eyes. I thought I was cool. 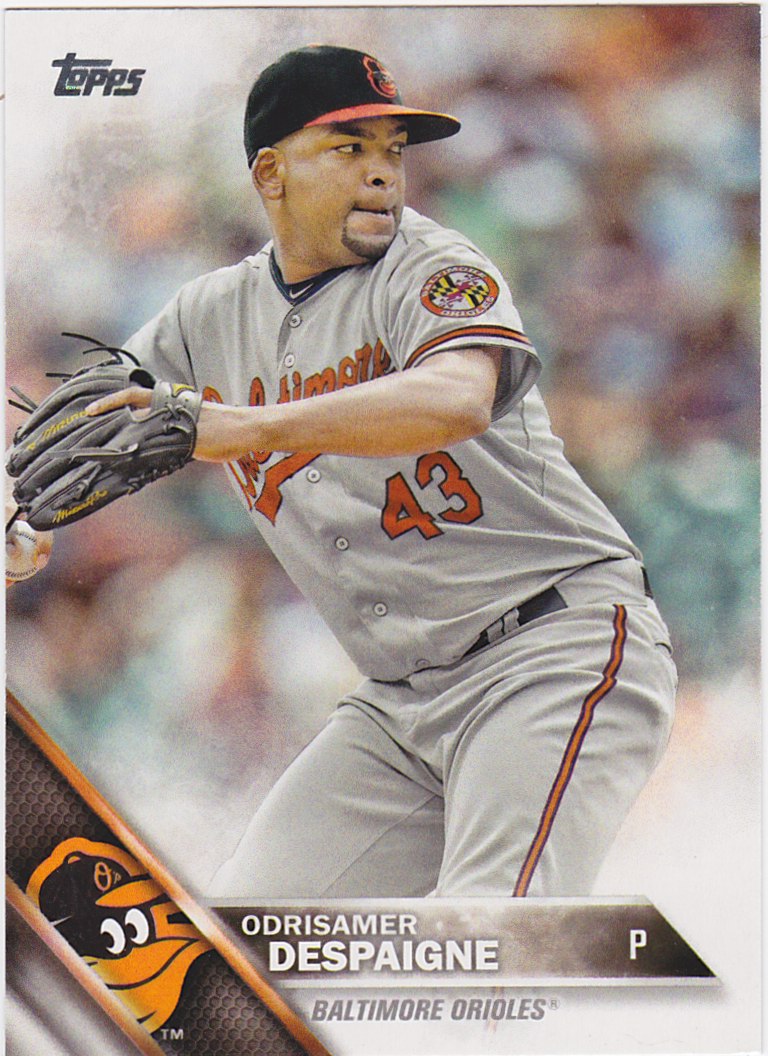 Henry Urrutia. He's a Cuban guy who attempted to defect twice and was successful the second time. He's been in the O's organization since 2013 and had a couple of runs in the bigs.

I don't hate the '16 Topps design as much as most people. I tend to like cards that feature team color coordinated elements. Sue me. 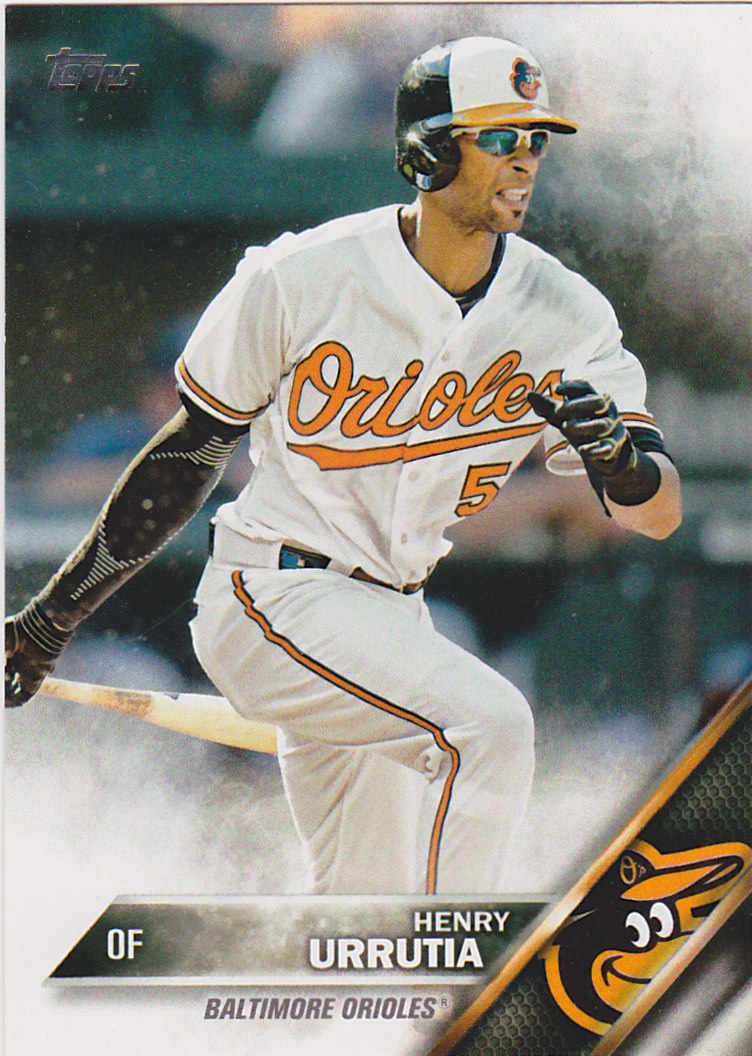 Here's something you don't see every day...an Aurora card of Brady Anderson. I had no idea what Aurora cards were but at first glance it seemed like something Pacific would have put out and it turns out that I was correct. Here is the card: 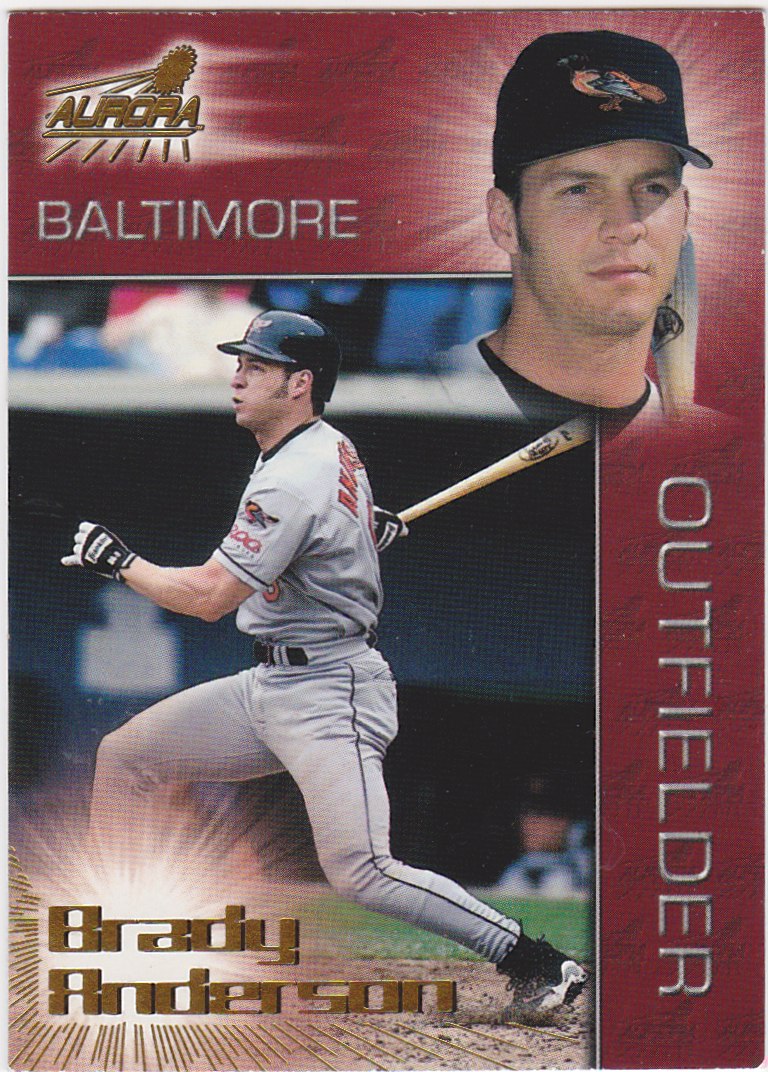 And here is part of the 2011 Standard Catalog of Baseball Cards entry that popped up in a Google search:

Being from 1998 kind of explains why I had never heard of these things. I was away from baseball in the second half of that decade. The good news is that because of that I missed the Joe Carter Experience in Baltimore.

Finally take a peek at this: 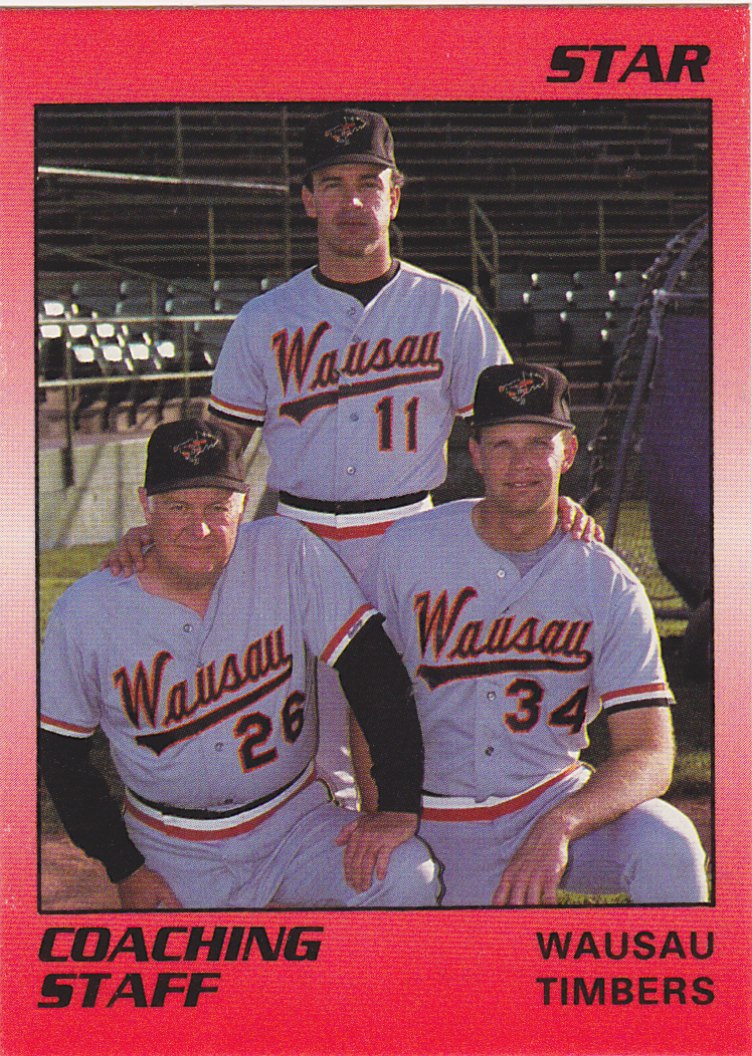 It's just so randomly random. 1990 Star Company Wausau Timbers card of the coaching staff. Back in the day there were several competing companies pumping out minor league sets. Star, Classic, ProCards and Best are the ones that I remember. I think Larry Fritsch published sets as well although I can't recall seeing any of those  outside his catalogs.

So my question is "How does a 1990 Best Wausau Timbers Coaching Staff  card end up in Night Owl's collection?"  Beats me but I'm happy to add it to my small box of Orioles-related minor league cards.

And thanks to Night Owl for getting me out of my blogging doldrums. I actually found another envelope in my mail today which I'm betting contains some Orioles cardboard! Looks like I'll have another post soon.