Cards at the Crossroads 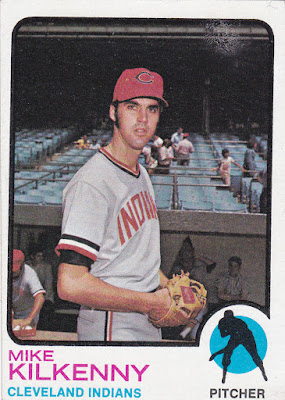 As I contemplate what I'm going to do with this blog I need to catch up with a few generous packages that arrived from a pair of esteemed bloggers over the last couple of weeks. Let's do these in the order they arrived.

First up is a group of cards I received from Joe Shlabotnik. 'Joe' killed some of my 1973 needs, quite a few in fact. I've posted a handful of my favorites. Above and below are two Cleveland relief pitchers, Mike Kilkenny and Steve Mingori. Both are rocking the early 70s sideburns and they look enough alike (at least on these cards) that I wasn't sure that I hadn't discovered a Topps error.

Mingori was on his way to Kansas City in June of '73, and he pitched on their '76 thru '78 division-winning clubs.

Kilkenny was probably just happy to spend the '73 season (at least what there was of it for him) without having to forward his mail. In 1972 he was with four different clubs over the span of  33 days. He began the year with his original team, the Tigers. On May 9 he was dealt to the A's for first-baseman Reggie Sanders. On the 17th the A's traded him to the Padres in a deal that netted them Ollie Brown. Three weeks later the Padres sent him to the Indians for infielder Fred Stanley.

In '73 Kilkenny made just a handful of appearances for Cleveland and gamelogs show he wasn't very effective in any of them. By May 6, just short of a year since his '72 baseball odyssey began, he was out of the majors. He played in the independent Intercounty Baseball League in his native Canada before getting into owning racehorses and being a golf pro. Some of the rabbit holes you travel through while researching the players on these cards are very entertaining.

And here's Yaz. This is a Yastrzemski card that I don't remember seeing much of. He was just at the point of transitioning into more of a first-baseman than an outfielder, but he had plenty of top-level baseball left in him. 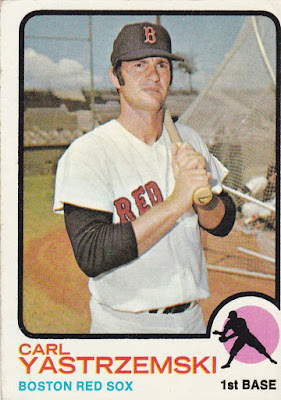 Cookie Rojas has what appears to be the batting helmet cart behind him in this spring training photo.When I was coaching we had these carts aplenty, filled with all sorts of equipment and dragged them to the fields every day. 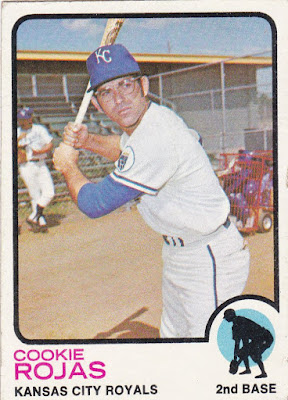 Dave Giusti in what I'm thinking is another ST photo but I've been to McKechnie Field and that doesn't match my memory of it. Of course, this picture was taken 40 some years prior to my visits. 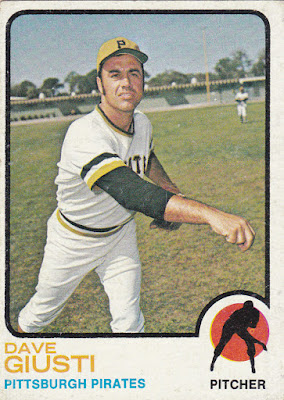 Ralph Garr wearing a Braves uni top I'm still conflicted over after all these years. 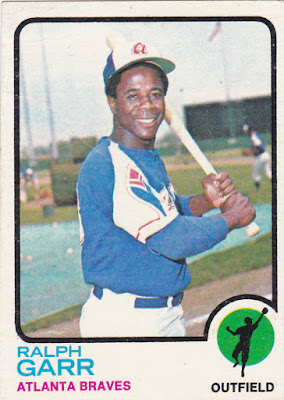 The '73s Joe sent helped get me to the point where I need less than 25 to finish the set. Outside of the 1960 Leaf set (which I'm convinced I'll never finish), the '73 set is the last one I'm looking to close out for the foreseeable future. Yes, that means that I'm done with the '57 Topps baseball and '69 Topps football sets. Hallelujah!

In addition to the 73s Joe included a handful of modern Orioles. Cards I'd never otherwise see. Trey Mancini is the closest the O's have to a household name. And that's a stretch. 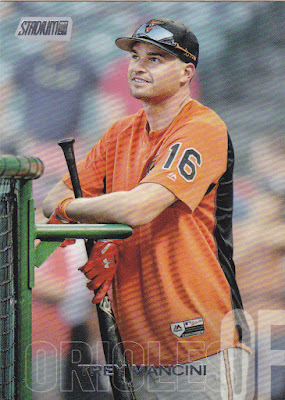 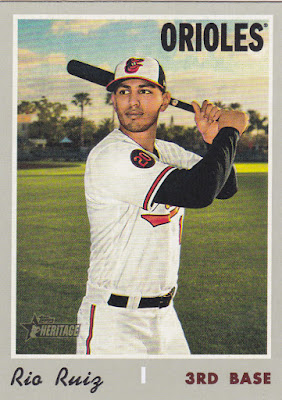 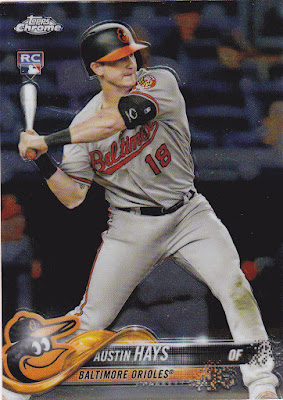 These two cards came along for the ride from Virginia. The more Presidents cards I receive the more I realize how many different sets there are out there. 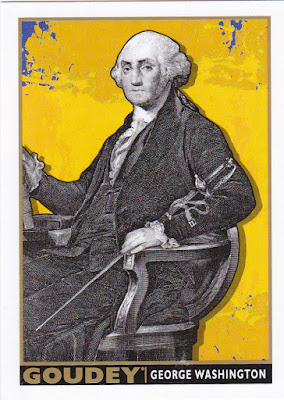 These Goudeys are kind of artsy. When I get some time I'm gonna look closer at the Goodwins from 2017 and find any other presidents. 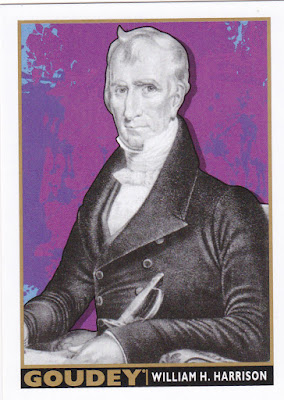 Thanks for these, Joe. As always they are much appreciated.

The other package came from beautiful Upstate New York and the Night Owl. This card of Cardinals' infielder Tommy Edmon was one I asked him to put aside for me. He had opened packs of this Topps '19 issue and Edmon was in one of them. This was the last card I needed to finish off my fantasy baseball binder for 2019.

I'm the 'crazy cat lady' of fantasy baseball. Because I can't say "No" I ended up 'fostering' seven orphaned teams this year. On three different platforms. Yeech. ONE team is usually too much for me to keep up with. Nobody in America was as happy to see the end of the regular season as I was! 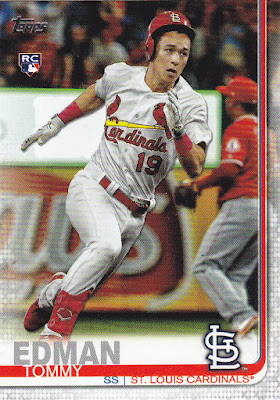 And, like Joe, the wise ol' Owl filled up the envelope with modern Orioles...and a note saying how tough it is to find new Orioles to send. Boy, no kidding! When you suck as bad as the O's do Topps has no need to put them into sets. I don't blame Topps a bit.

I really like this fancy-ass John Means card. It immediately won a spot in my fantasy bb binder, booting out the minor league card I had of him previously. 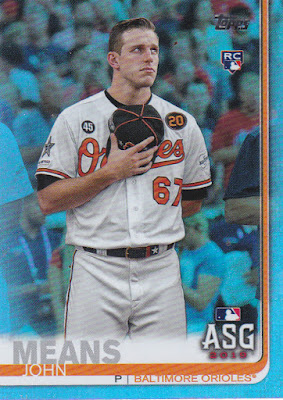 Throwback style Chris Davis.  Looks like he'll be around Charm City for 2020. I'm OK with that. 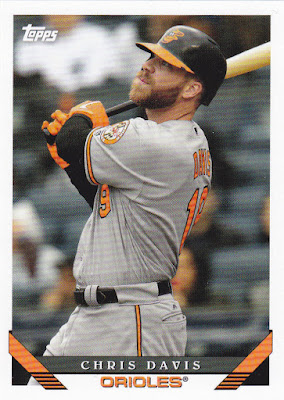 Manny. Everyone hates him but I'd take him back in a second! 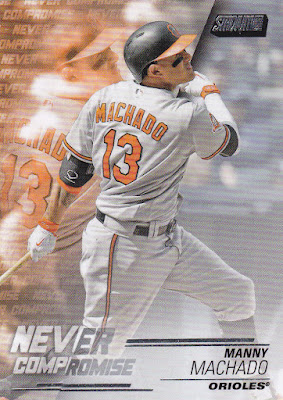 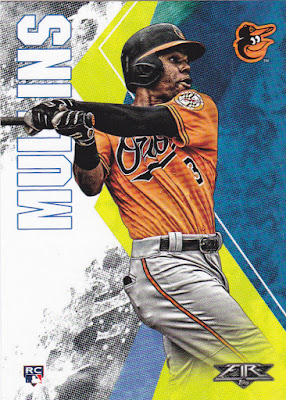 And a nice mini A&G Brooks. I recently got around to putting my Orioles mini cards in tobacco card pages. They look good in pages, much better than shuffling thru them by hand. 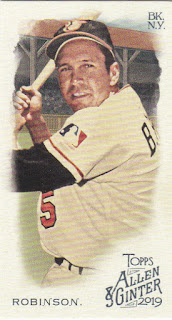 Thank you, Greg. And thanks to both you and Joe for much enjoyment via your excellent blogs.

Tomorrow is Thanksgiving. It's the only holiday I really look forward to. Our plan is to spend it at the home of my recently widowed mother-in-law (RIP, Dad) and it has the potential to be a disaster. Let's hope it exceeds my expectations, shall we? And I hope yours is special.

See you somewhere down the road on the flip side.

In the Nick of time

Just last week I was bemoaning the fact that I hadn't added anything to my PCs in quite some time. Then came a completely unexpected and very neat surprise.

These custom cards came to me from Nick Vossbrink who is both a Twitter friend and blogger of many interests, particularly baseball and photography. 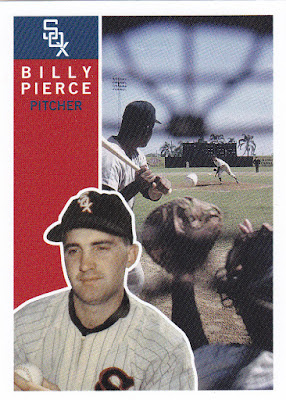 These are great, yes? I really like the team-oriented colors and terrific photos Nick used on these. That 'ump view' shot of BP throwing a Spring Training pitch is amazing. It just came up someplace recently, Twitter maybe? I'm sure Nick has the story. It's got a 'Life Magazine: Baseball Is Back!' vibe to it.

And here is Brooks... 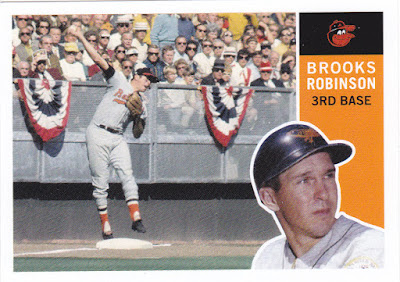 That's a classic photo from the 1970 Series.

Nick gave these the full career stat-back treatment which I appreciate even if I have come to need a magnifying glass on my desk in my old age. 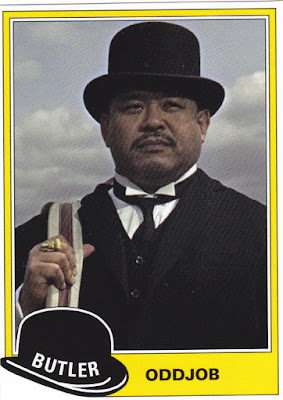 1981-style Oddjob! Toshiyuki 'Harold' Sakata was the Hawaiian-born actor who played one of the most memorable roles in any Bond movie as Goldfinger's henchman/manservant. Sakata packed a lot of living into his 62 years. He was an Olympic weight-lifter (Silver medal winner for the USA in 1948), pro wrestler and actor.

Pretty darn clever of Nick to use the '81 card design that features hats as Oddjob's bowler was his 'calling card' as it were. This makes a really fun addition to my actor/actress binder. If you aren't a Bond aficionado check out this clip which sums up Oddjob's role pretty well.


Many thanks to Nick for these fun customs.
Posted by Commishbob at 9:39 AM 2 comments: