I wish I had back all the hours I spent playing sports (mostly baseball) board games. What you see above are the games I still have on a shelf high up in a closet at home.My game of choice, as you can probably tell, was Strat-O-Matic. From my first purchase of the game in 1967 until I finally put it away in the mid-80s I wasted more time playing Strat than I care to remember. But it sure was fun.

The box in the lower right, the one with the stickers on it, is more or less my original Strat game. Through the years I purchased a couple of replacements but I kept (and kept repairing) the top cover of the original box.

Here is my view of baseball as I knew it for almost 20 years: That playing field with all the glued-on pics is original as well. I had a cardboard 'platform on the right where the stacks of teams are now but other than that, it hasn't changed. I saved a piece of the original box bottom, that's the 'Hot Corner' taped to the right front of it.

The Strat box at the top of the picture is one of many 'replacement' games I bought and that box know holds spare charts, game cards, playing pieces and scoresheets. The white Strat box is my 2011 50th Anniversary edition. It's a replica of the original 1961 edition. I haven't played it.

I played 'season' after 'season' with a six teams playing 80 game schedule. My teams I used were almost always American League clubs. The Orioles were always included of course The other teams were usually the Red Sox, White Sox, Tigers, Senators and Twins. If you look at the charts in the pic you can see that over time I felt I knew more about the game than the folks in Glen Head, NY and I modified them somewhat. The one on the left was my 'Injury Chart' which covered thing like rain delays (I would go get a soda if that occurred), rain outs, ejections and injuries to defensive players. That wasn't something found in the actual game.

I always played the basic version, I couldn't be bothered with the advanced or super advanced versions. Mostly I played to accumulate stats. They were kept by hand and calculated with a slide rule. That's the object you see below. Only the more senior of you will remember them.

(Note: that photo and most of the others below are from the internet)

After a few years of that I wanted more accurate numbers and discovered the Sporting News Averages Book which contained page after page of charts which allowed you to find batting averages and ERAs. Eventually I got a pocket calculator and life was perfect. 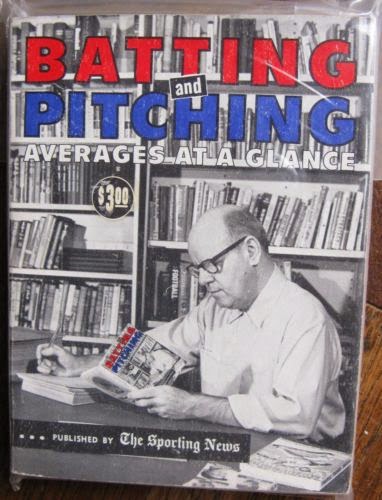 Strat wasn't my first game though. When I was about ten I got a copy of Cadaco's All Star Baseball, the famous game with the spinner and player disks. It's the game that started me down the path of board gaming. 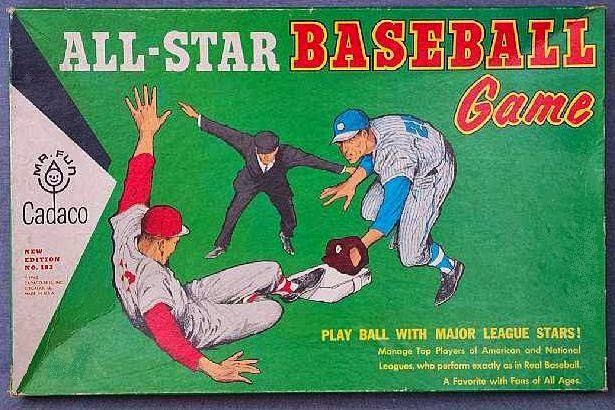 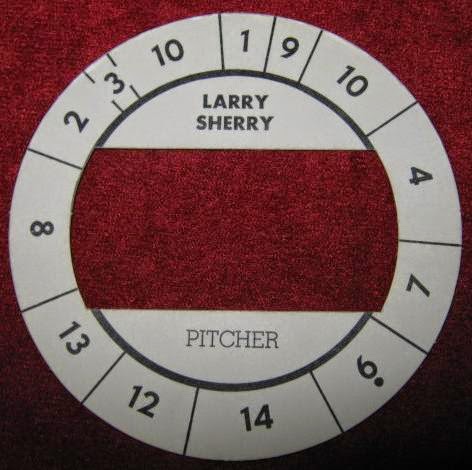 A bit later it was Challenge the Yankees. Game play was pretty basic and the players available were pretty limited. I only wish I still had the player cards. They can pull in big bucks nowadays. I played this one a lot with my Dad. He was always the Yankees, I as always the All Stars. 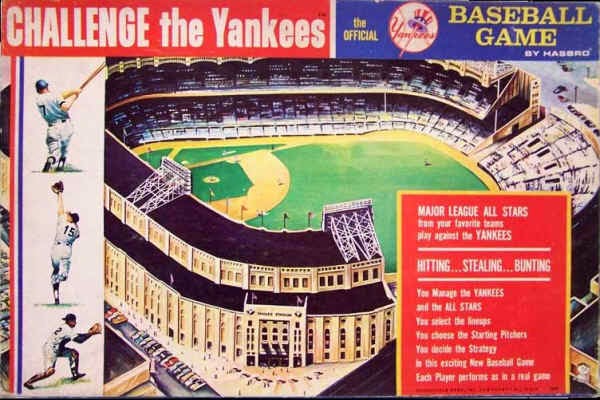 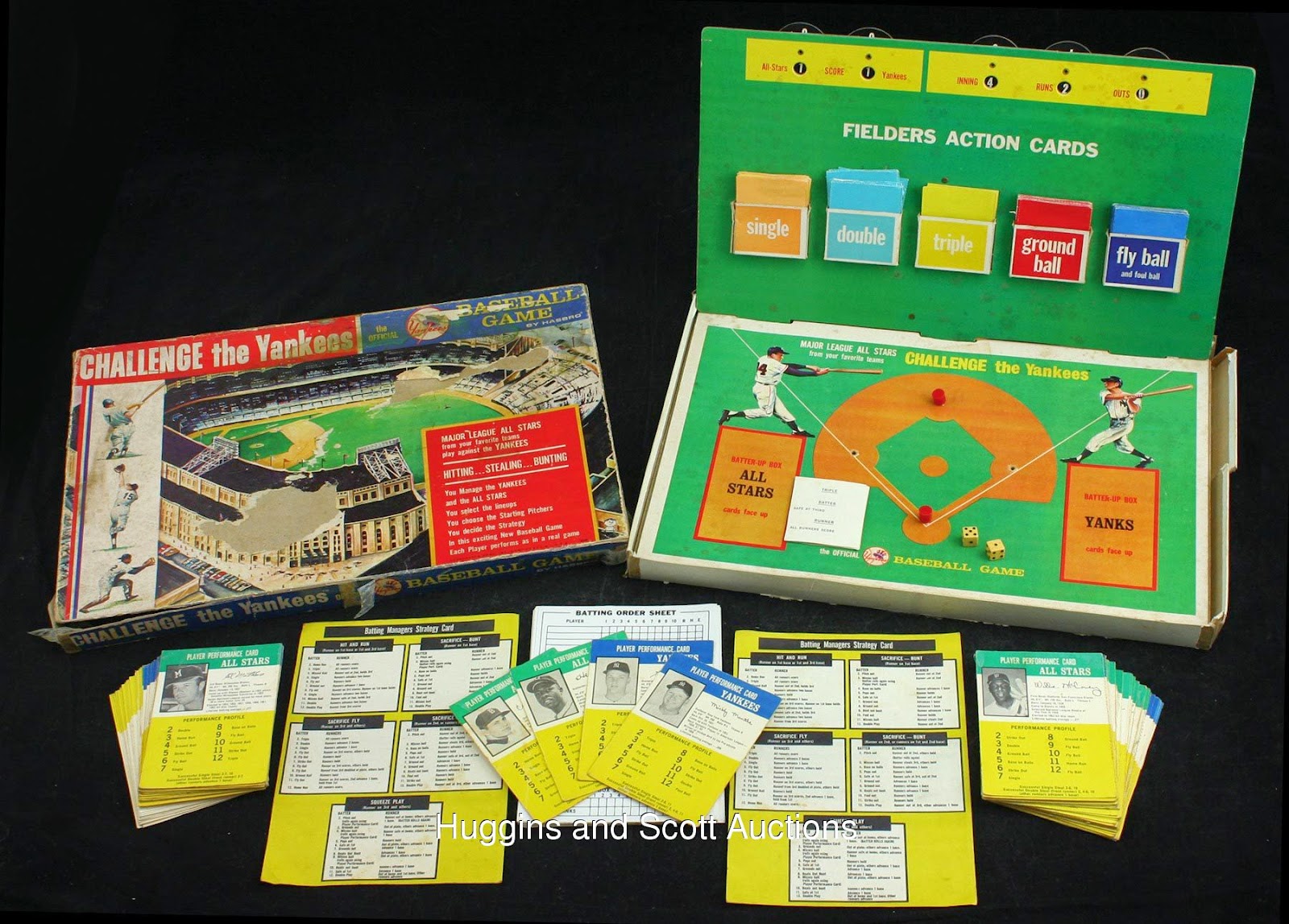 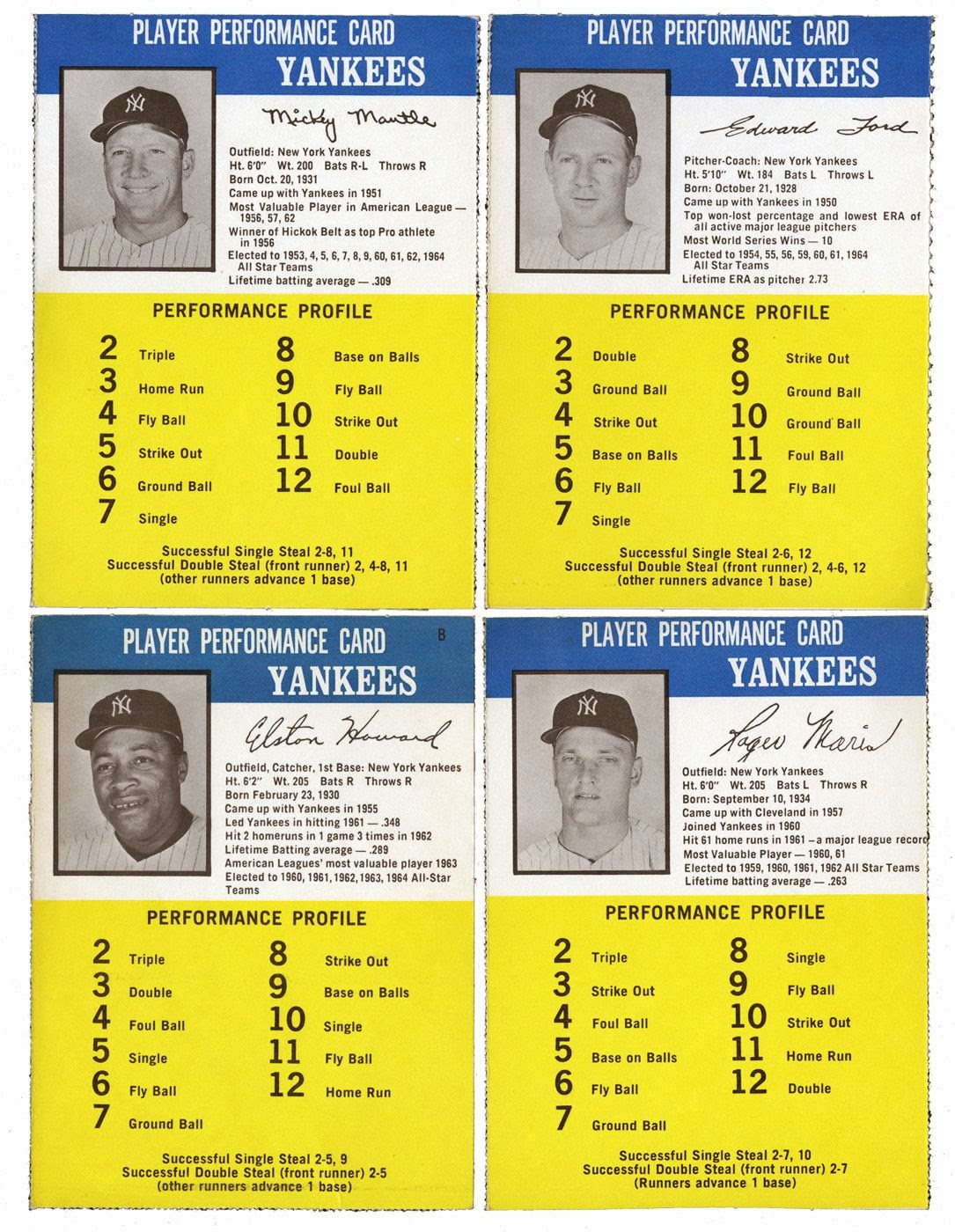 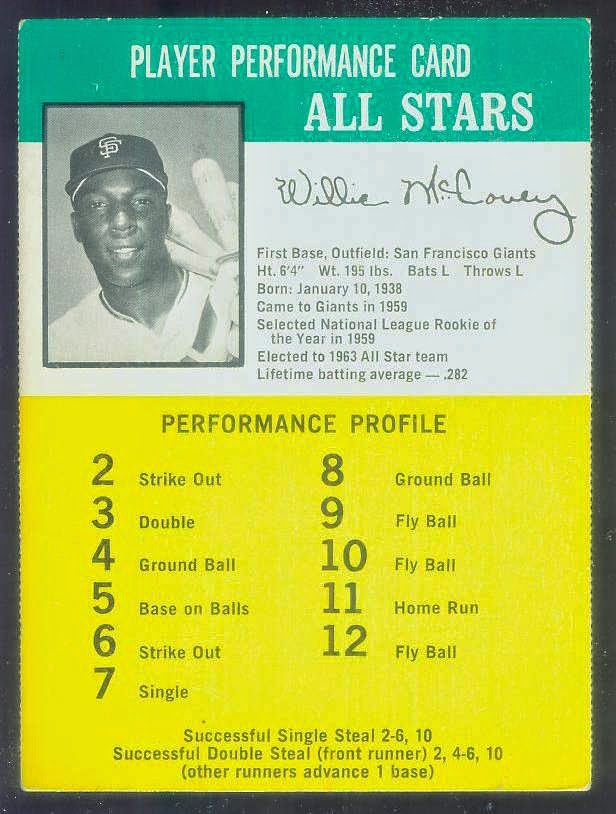 When I got my first desktop computer I thought I'd try computer baseball. APBA's version made by Miller and Associates for DOS (youngsters should look "DOS" up) was the most popular at the time. I found it boring and cumbersome. I hated not having those player cards and dice in my hands. Here is a screenshot from the net:

Then I gave Earl Weaver Baseball a shot. It was more of an arcade game. I bet I played it twice. 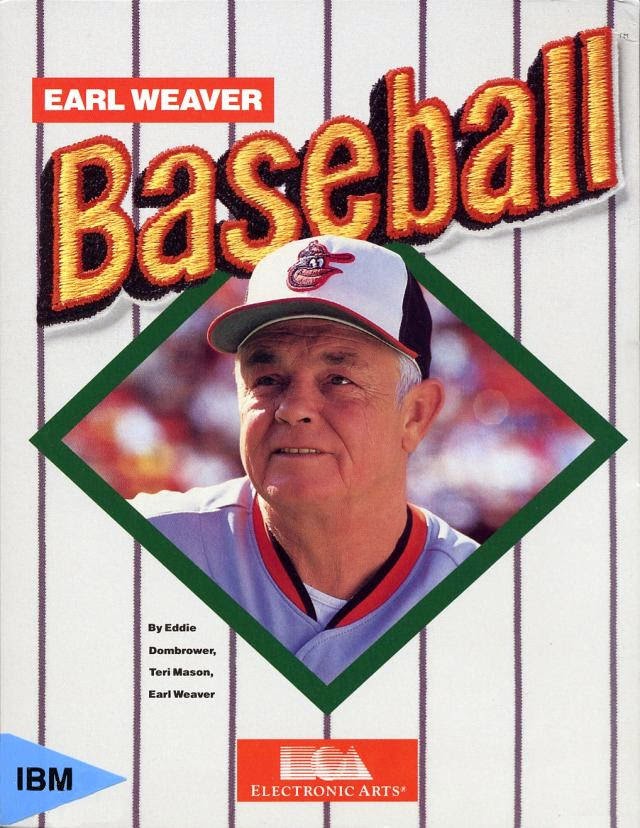 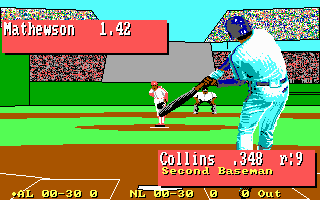 About five years ago I came across a copy of a book written about the Star-O-Matic game company (it's much better than it sounds LOL) and I got the game playing itch once again.

But I knew I didn't have the time for setting up a dice based game so I did a bit of homework and read really good things about Diamond Mind Baseball. It was pretty costly but I really enjoyed it. I've been on a break from it for about a year but I played 15 'seasons' in the four years I have owned it. I have hundreds of teams and I even 'homebrewed' a few. I'll get back to it one of these days.

I've owned and played a few other sports-related board games over the years. My dorm buddies got caught up in Oscar Robertson Basketball one semester. We skipped a lot of classes for this one. 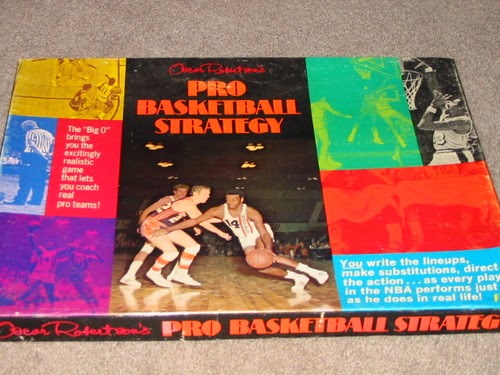 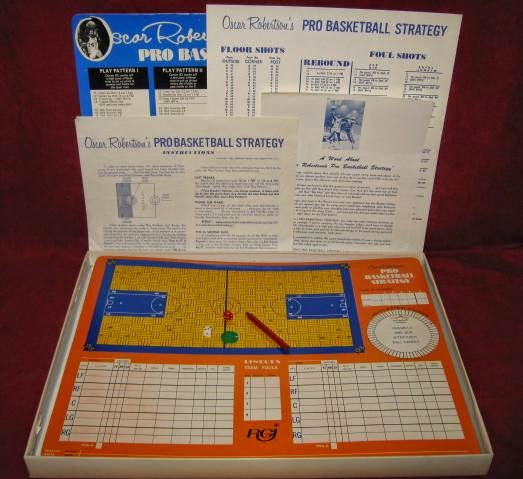 I had All-Pro Football which was a combination of checkers and football strategy. I remember it but I don't think I played it very often. 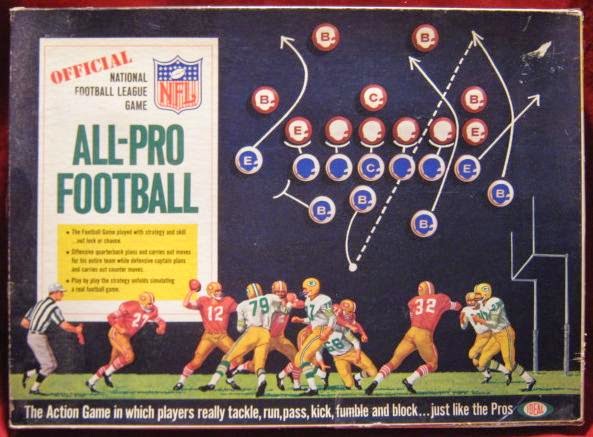 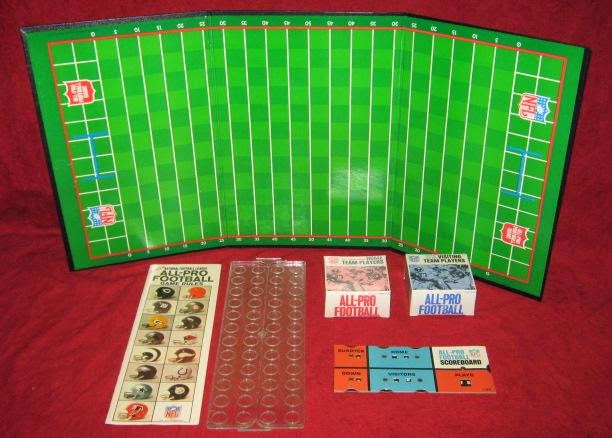 Up top in the original picture you see Strat-O-Matic Football. I think I played it with my Dad once. The box is beaten up by time (and repaired using pieces of Strat baseball boxes) but the game parts are pristine. I don't even remember buying the APBA Football game. I'm sure it's never been opened. And that Pursue The Pennant game box is untouched. The game parts are still wrapped as they were when I bought it. I was attracted by the hype but about the time I bought it my game playing interest was evaporating.

Finally here is my own Strat-O-Matic card. You sent them some cash and your 'stats' and info and you got back a card to put yourself into the game. I bought it for fun. I never used in in my 'league'. I'd pretty much quit playing by the time I bought it. I only 'enhanced' my running ability. In no way was I a 1-14. 1-9 would have been more like it. 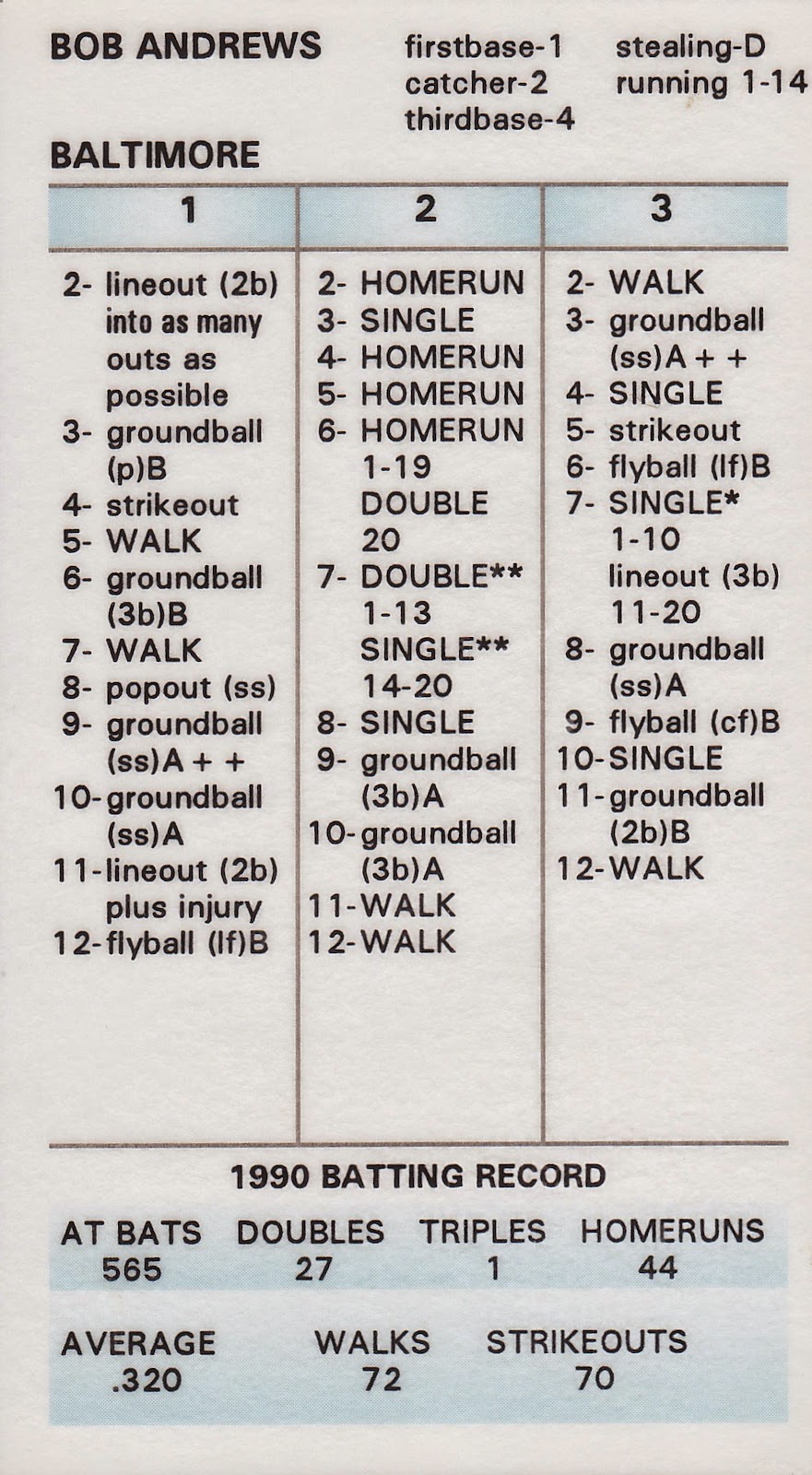 Posted by Commishbob at 7:20 AM

Email ThisBlogThis!Share to TwitterShare to FacebookShare to Pinterest
Labels: board games, Strat-O-Matic