Brisket and Hal Chase, and The Babe (sort of) #walletcard This past Saturday I was dutifully following my wife from antique store to antique store and at one stop I came across something that could have kept me interested for hours on end. The place had bound copies of the Pueblo Colorado Chieftain that stretched from about 1915 through the late 1920s. Just wonderful stuff.

I poured over some of these papers for an hour or so while my wife moved on to another shop. I'm not sure what the attraction is but reading 'morning after' accounts of games that featured Babe Ruth as a Red Sox pitchers and Rogers Hornsby's batting prowess had me hooked. I wish I had taken more pictures but I was trying to be discreet about it. The volumes were in various states of repair. Some were still tightly bound in their leatherette covers, some were so loose that they came apart as I opened them. As you can see I pulled Brisket Howard's card out of my wallet so he could witness some history. 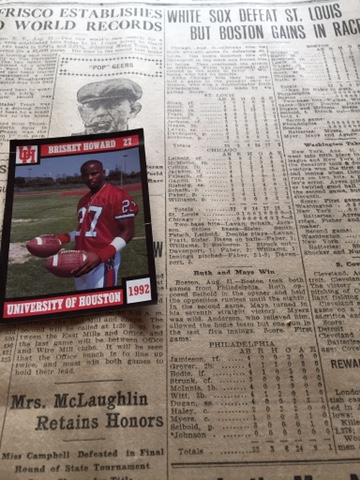 You have to look close but the box score to the right of Brisket shows Ruth as the Red Sox pitcher. The game was the first game of a doubleheader against the Athletics on August 31, 1917. Ruth went all the way for his 20th win of the season. He beat a Philly pitcher with the fabulous name of Socks Seibold. There was a ton of interesting stuff in these old papers. World War I was going on for a good part of it and the Chieftain carried the latest from Europe and sadly lists of locals killed or wounded.

Below is a bit of the sports page from September 6 of the same year and you can see that Seibolt lost again to the Red Sox on the 5th. It was a hard luck defeat with him allowing only three hits. The ads were great as well. I should have taken pics of some of them. It was a good time to be a drunk. Plenty of liquor store ads and gin went for 65 cents a quart!

I didn't even ask how much the books were. They smelled pretty musty and I knew my wife would not be happy with one in her car or sitting around the house. I may go back and find the price. If it is cheap enough I'd buy one and just keep it a day to pour through every page.
Posted by Commishbob at 6:30 AM