Batman Sketch Card and a couple of mystery Batman cards

I added a Batman sketch card before 2017 ended. I haven't been looking for them aince I filled up my designated pages but this one sort of fell into my lap.

Before I get to the card it's worth mentioning that one year ago today I was contemplating a return to this blog after a few months off. I did so later in January but I didn't really have my heart in it. And at times it showed. I'll try to do better in 2018. Maybe America can as well.

The Batman card is by Jeff Ward and I think I was the only bidder. Hard to beat one this nice for a buck plus shipping. Maybe I'll have to start a new binder page and find 8 more sketch cards. Maybe not. 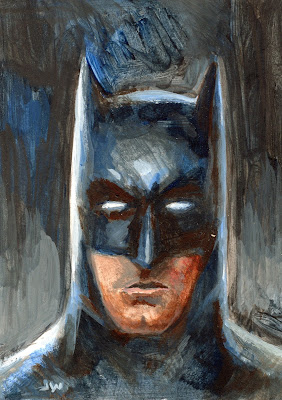 These other two cards were sitting on my desk under some football cards. I think they were sent to me by Tom of The Angels, In Order blog. I scanned (and posted) the great Sky Box set he sent and I think I remember that he included these as a 'bonus'. I probably put them to the side and promptly forgot I had them. Getting old can be difficult.

But here they are now, better late than never. They are from Topps' 1993 Batman: The Animated Series set which is based on the show that ran from 1992 thru 1995. More great Batman art from a cool animated series. Not much for me to add.

This is card #1 (of 190) which the Trading Card Database describes as the 'cover card'. 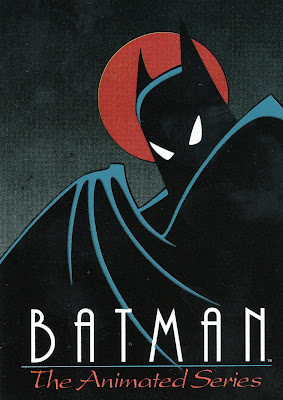 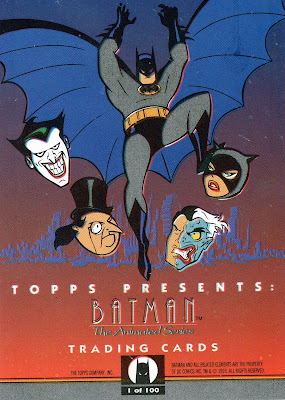 This one I'm guessing is a promo card. There are several listed on TCD but not all have scans. So which one this is will take some detective work. 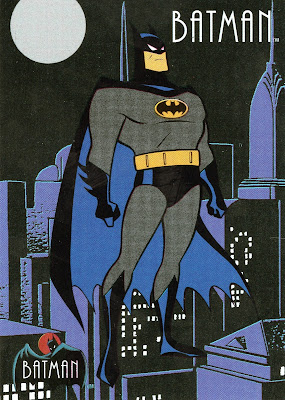 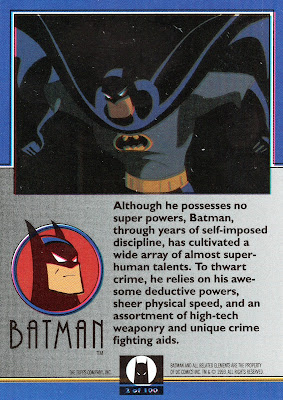 I'm at the point where I'm going to need a separate binder for my various Batman cards. That's not a bad thing.

Thanks again, Tom. I have a few things that'll be on their way to you this week.
Posted by Commishbob at 12:13 PM

Email ThisBlogThis!Share to TwitterShare to FacebookShare to Pinterest
Labels: Batman Sketch Project, Batman The Animated Series, The Angels In Order