Jim Johnson's face sez it all 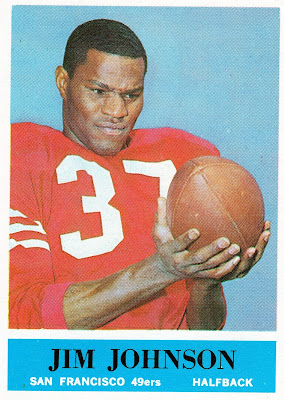 With the Jim Johnson Philly Gum card landing in my mailbox on Monday I'm down to just two holes in the binder. The Mike Ditka is en-route but the Bart Starr card is proving to be a victim of my cheapskate ways. More on that in a bit.

I grin every time I look at the Johnson card. Love that expression. It's like that football isn't really a football at all but a steaming pile of horse manure that he caught as a reflex.

That's just about the same look I had when I opened the envelope the card arrived in. The seller did what other sellers have done in the past and used junk wax era cards as 'stabilizers' to protect the one he was sending. Sadly he cello taped one of the extras to the outside of the card holder. My 'free bonus'* '92 Fleer Ultra Dave Winfield card ended up like this: 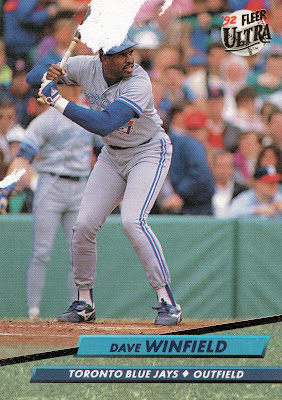 Strangely he used painters tape to attach a different Winfield in a penny sleeve to the other side of the holder. So I'm the proud owner of an intact 1990 Score Dave Winfield. 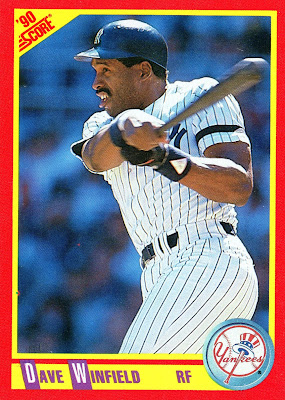 Yes, these are both dime box fodder but I still feel I'm allowed to while about the fact that I wish he'd have used the painters tape on the Score and vice versa. That Fleer Ultra is was a much nicer card.

Oh, I almost forgot the Bart Starr card story. The average price for an acceptable (to me) copy of Starr's '64 Philly Gum card is in the $35-$40 range. Two copies came up on eBay within the last few weeks that were well below that and each had a 'best offer' option. I low-balled 'em both. And had the offers rejected. And I was too stubborn (stupid) to accept counter offers. Live and learn.

*=added for clarity...these Winfields were used as "protection" by the seller.
Posted by Commishbob at 1:02 AM