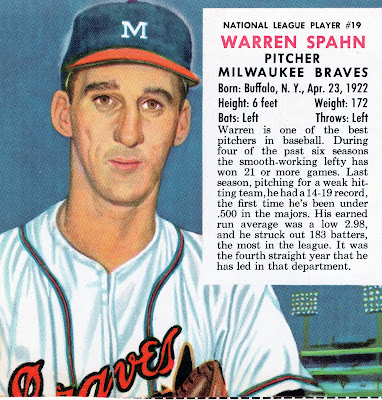 I wish I'd had the chance to see Warren Spahn at his best. The huge windup and high-legged delivery were still in evidence when I finally was able to watch him in person in his final season as a player. He was no longer one of the most dominate pitchers of all time but he was still Warren Spahn and that was pretty cool.

I actually saw him twice in 1965, once as a Met and late in the year when he made one of the last starts of his career as a Giant at Shea Stadium. That game I saw him pitch as a Met was a loss to Don Drysdale and the Dodgers and came in front of one of the larger crowds I was ever a part of at Shea. I remember it because my friend's father explained how the Mets used a different ticket pricing scale for games against the Dodgers and Giants. This was the first I'd ever heard of that practice.

This Red Man card was an impulse buy from a dealer who had some very reasonable 1964 Philly Gum football cards. The sets (Red Man produced then for four consecutive years) are not difficult and in most cases not expensive either. They make for an easy way to add vintage stars to your collection. I guess they compare to the 1964 Topps Giants in that way. The ones without the 'tabs' along the bottom are even cheaper and who misses the 'tab' anyway?

I never really set out to become a Spahn collector but through the years I've really gained and appreciation for both him and his cards. I've joked in the past that Spahn cards are just collections of different angles...his cockeyed cap, crooked smile, bent nose and prominent ears make them unique. Add in the classic Braves unis and it's hard to pass up a Spahn card in a bargain bin or online at a good price.

It occurred to me as I typed this that this card is a 'night card'.You paying attention, Night Owl? My scanner did weird things with the back of this card. In hand it is just the usual color of 50's cardboard with a ghost-like hint of 'bleed-through' from the ink on the front. But my scanner gave me this: 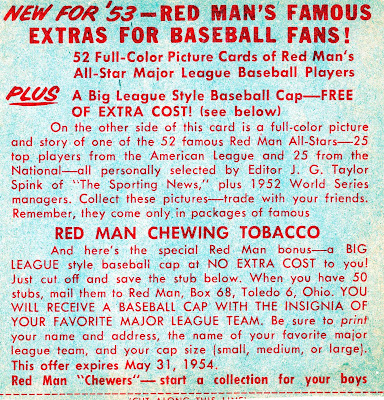 I'm going to need to inventory my Spahn cards. I doubt I'll ever become a Spahn 'completist' in the same way I am with Billy Pierce but there are worse ways to fritter away one's retirement savings.

Posted by Commishbob at 9:21 AM