The last time I went to the hotel card show (November?) I found a little unopened cello pack in one of the bins. I don't recall if it was the dollar bin or the quarter bin but either way I figured I shoud pick it up. The top card was this Barry Larkin. 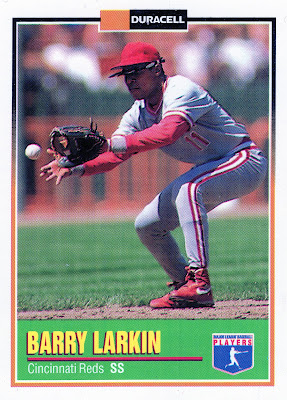 I figured that the Internet's #1 Larkin collector, Chris of the Nachos Grande blog might not have it. Of course when I got home I checked his list and saw that he did indeed own a copy. But it's not a wasted purchase...I'm getting a post out of it.

I didn't pay much attention to the pack again until I decided to clean off my desk last week. From Duracell Batteries this thing just says "I'm a 90s oddball!" Unlicensed by MLB it does carry the MLBPA logo and therefore has any team logos removed. Back then non-MLB approved cards could be issued with the team nicknames.  At some point lawyers got involved and we ended up with the semi-anonymous, city-designated only Donruss/Panini sets we see today.

There were four cards in the pack plus a header card with a checklist. That checklist (it's at the bottom) told me that there were two series of these and that my pack came from Series II. The same four players travel together in each pack which Duracell called 'Sets'. This was set 5 of 6 issued as part of Series II.

A couple of sluggers came in this one. Gary Sheffield.... 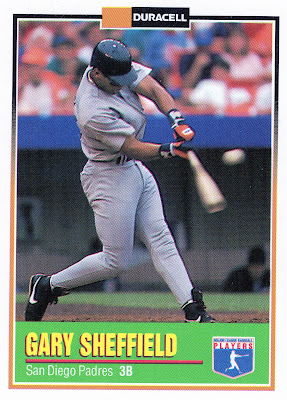 ...and José Canseco. Yes, he got the accented 'e'. You don't see that very often, particularly on baseball cards from 1993. 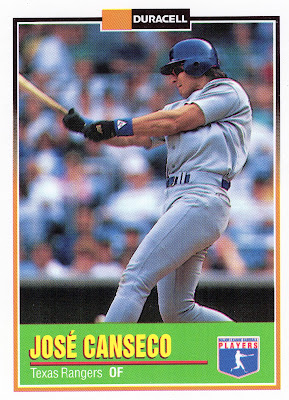 Jack McDowell was also along for the ride. 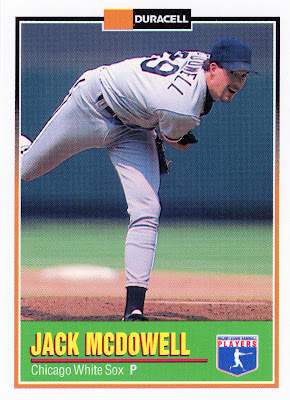 The backs of my four cards had a portrait photo with capless players or a closely cropped pic that left the logo out of the picture. The stats go back five years. 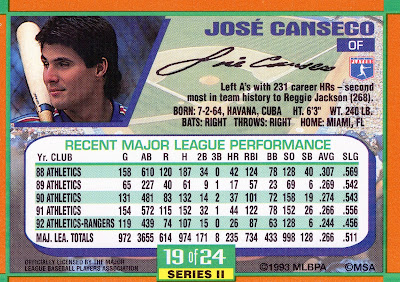 Here is the header card. The set came free with a Duracell Saver Pack of batteries. 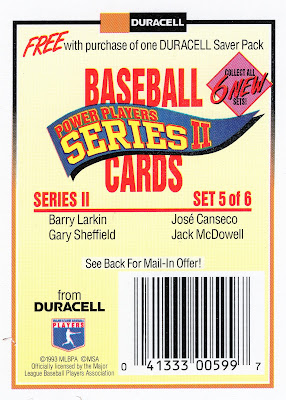 There was a mail-in offer on the back of the header card. I've blown it up a bit for easier reading. Each of the 'sets' is listed. 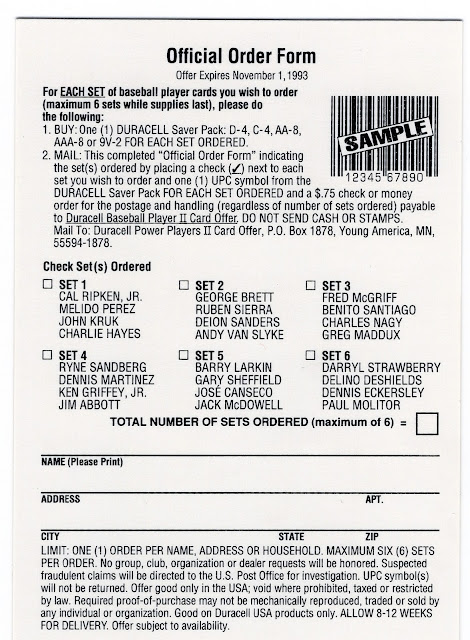 If I had a choice I'd nab that sweet Set #4. Hard to beat getting two of my PC guys (El Presidenté and Jim Abbott) plus Junior and Ryno!

BTW...I often wondered about the Young America, MN address. Seems like every coupon or redemption was headed that way. I finally checked it out and it's a real town. Wikipedia told me this (among other things):

In 1973, the Dile Corporation moved to Young America, and changed its name to Young America Corporation. They are one of the largest employers in the town, processing rebate, coupon, and other marketing programs for businesses. They receive a great deal of mail, enough that this small town has over 20 zip codes assigned to it. A main one is 55555.

And so one of life's little mysteries is solved thanks to a junk box card purchase.

BTW...if anyone wants these I'll throw them your way. Just say the word.
Posted by Commishbob at 10:22 AM