Hard to believe a half century has passed since the Game of the Century played out on the floor of the Astrodome in 1968. I can't say 'I remember it like it was yesterday' but I do have a lot of memories of that night.

I've posted about the game several times so I won't repeat all that. I just have a few photos and rambling thoughts.

Here's a postcard I received recently as part of the mailing from Joe Shlabotnik featured yesterday. It's a beaut. We had first arrived in Houston that previous summer (July '67) and seen Astros games and Houston Cougar football games. So the Dome wasn't new to me but it was still awe-inspiring. 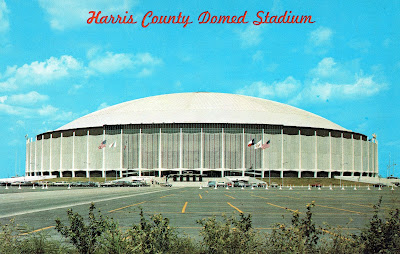 This is not my ticket but I do still own mine. I stored it in a plastic case a few years ago to protect it. I need to pull it out and have a display made with it. This one belonged to a high roller who paid $5 to sit in the red field boxes. I had a better view. 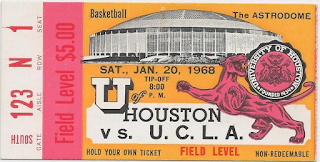 We had $2 seats in the front row of the upper level directly across from where this photo was taken. In baseball terms we were right up behind home plate. Funny thing is I ended up in that section as a student for UH football games for years and bought them as a young alum after I graduated. 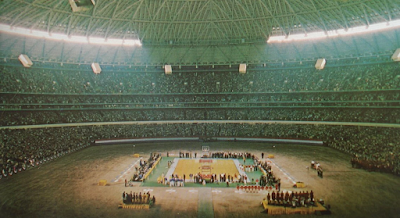 I have a folder of game pics that I save from various online stories. 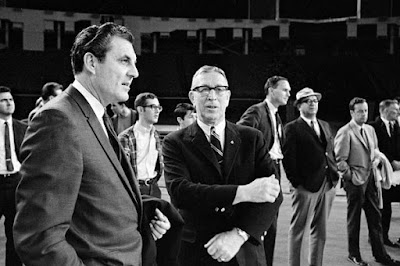 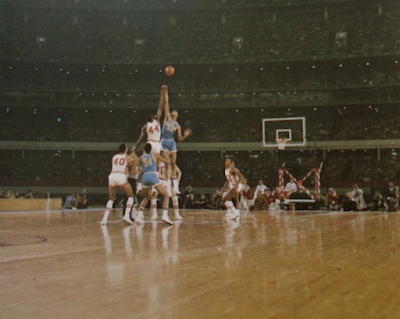 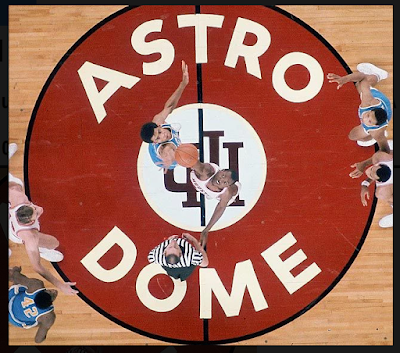 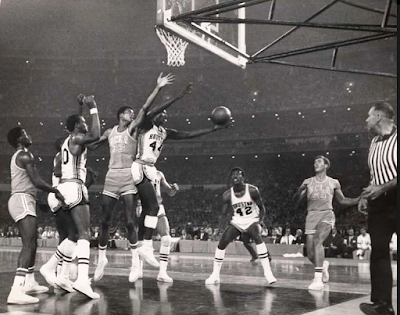 I have the program and some replica covers that UH gave away. This one I got signed by Guy Lewis and Elvin Hayes and a dinner held for Coach Lewis. 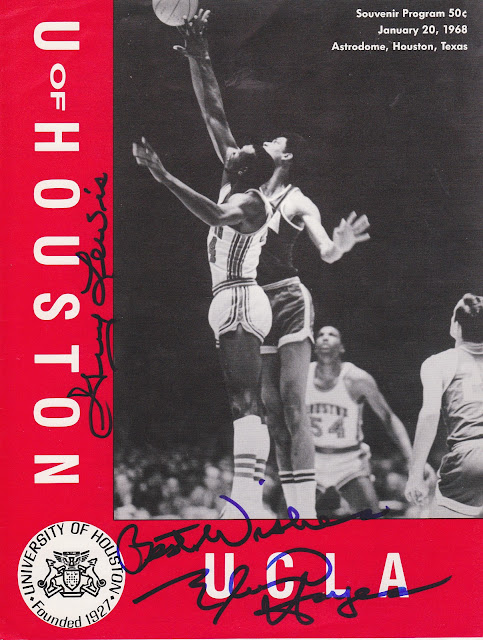 The roster pages from the program. They are hard to read but Vern Lewis was on the team....Guy Lewis' son. In those days colleges fielded freshman teams. 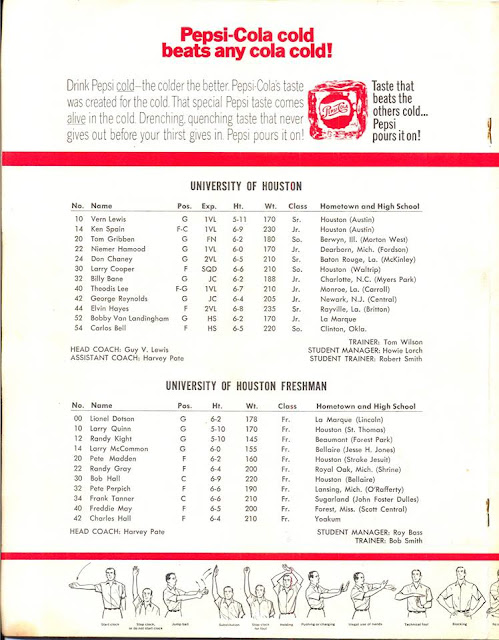 Mike Warren of UCLA went on to become an actor and starred in one of my favorite shows, Hill Street Blues. He's now Jessica Alba's father-in-law. 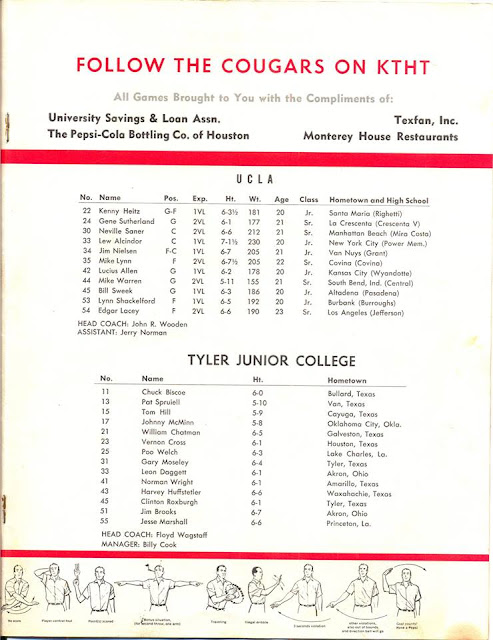 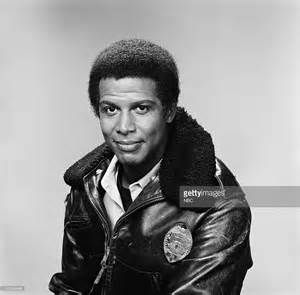 Playing that night in the prelim game for Tyler JC was one Poo Welsh who ended up at UH as a shooting guard. He was the star player when I got to campus.

The Coogs won 71-69. Inexplicably Elvin Hayes found himself dribbling out the clock as the final seconds ran down. He's said it was the worst moment of his career. He was by far the worst ball handler on the court. How he ended up plodding around the backcourt among UCLA guys reaching for the ball is a mystery. 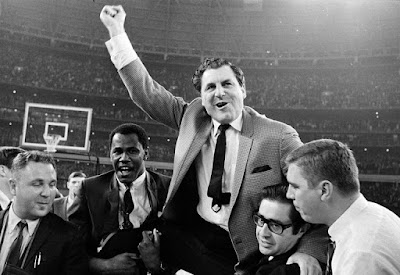 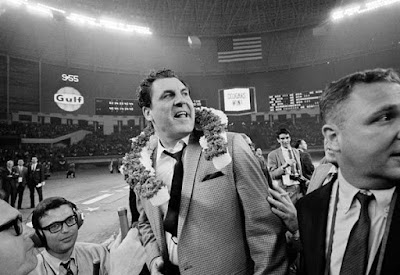 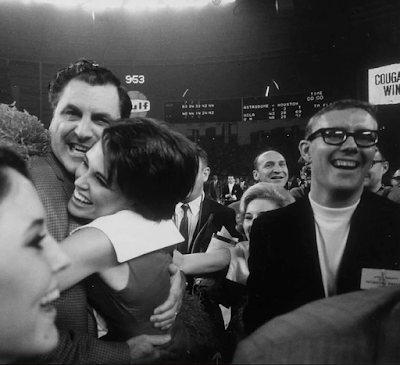 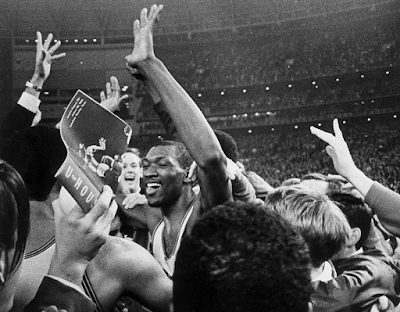 I remember the crowds coming out of the stands in waves from each side and people jumping over the press rows and team benches which were below floor level. Crazy stuff.

It took my father and me a looong time to get out of the parking lot and headed home. There were newspaper vendors selling copies of the Houston Post and Chronicle in the lots and at the exits to the streets out of the backs of trucks. I have part of this Post front page. I chose to cut the relevant parts out and saved it. 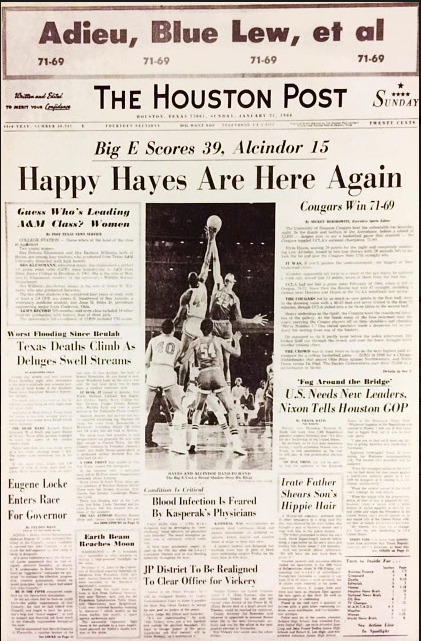 Finally here's a really lousy pic I took of my signed Hayes poster showing him in the GOTC. Unfortunately the reflection on the glass is my office. LOL 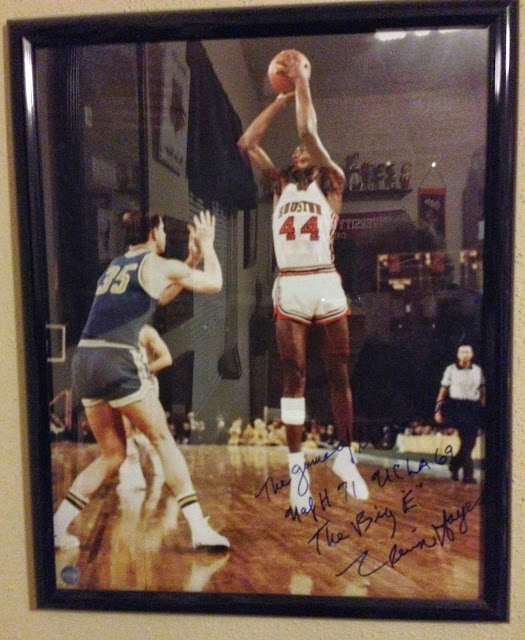 January 20, 1968 was the greatest sports night I've ever experienced. I've noted many times that because of that I chose to return to Houston and attend UH even though my family had moved back to New Jersey in 1969. If I had gone to Rutgers, or Fairleigh Dickinson or Glassboro State like I had thought I would my life would have been far different. I'm glad it turned out the way it did. 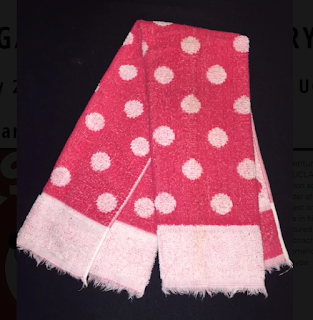 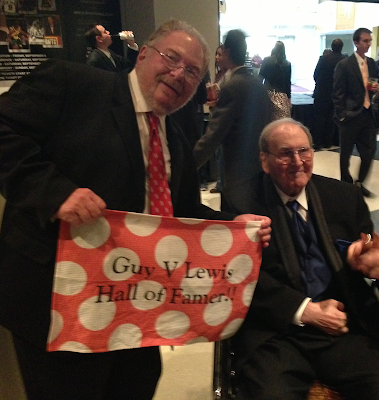 Posted by Commishbob at 2:29 AM

Email ThisBlogThis!Share to TwitterShare to FacebookShare to Pinterest
Labels: Elvin Hayes, Game of the Century, Guy Lewis, University of Houston