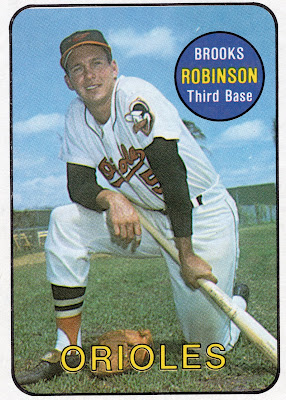 I hate spending more for postage than I do for the card I'm buying and because of that I find myself buying 'add-ons' to make my transactions 'worthwhile'. I can't recall what I was picking up or where when I grabbed these '86 Sports Design Products cards.

These have popped up on other folks blogs from time to time. They use photos from the collection of J.D. McCarthy who did postcards for sale to fans and players over the course of several decades. I love old McCarthy postcards and have quite a few in my various collections. Hobby icon Bob Lemke purchased the McCarthy archives and was in the process of cataloging it when he passed away about a year ago. So we may never see much more of that huge treasure trove of photos any time soon.

These are obviously a riff on the 1969 Topps cards. At least the fronts are. The backs are spare and look pretty amateurish compared to the front side. These remind me of the sorts of cards I'd see alongside Broders, Bammers and phone cards back when card shows attracted lots of 'dealers' looking to cash in on the sports card/memorabilia boom. 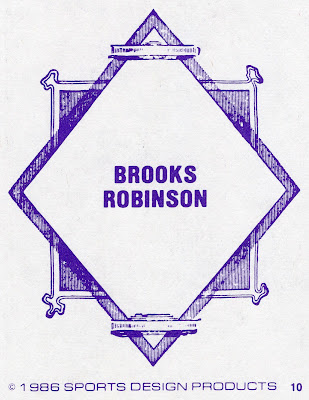 I think the seller had most of the set available but I just grabbed these because they struck my fancy. I don't have a favorite but I sure do like this shot of Sandy Koufax. 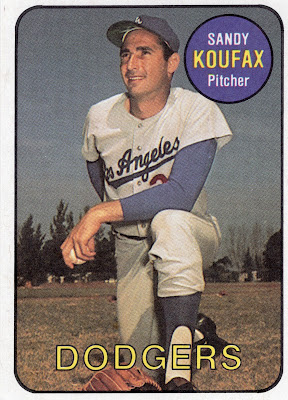 Just to slide a bit off-track I found a postcard that would seem to be from this same photo session. It's a McCarthy postcard. You can see his logo in the lower left corner. He used that on most of his postcards but not all of them. 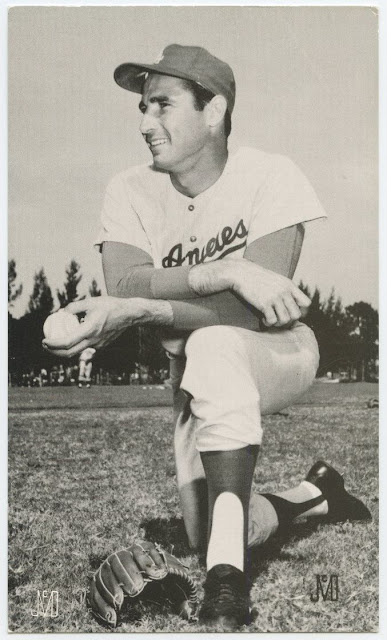 Back to the cards at hand..... aren't those stirrups on Roberto Clemente grand? 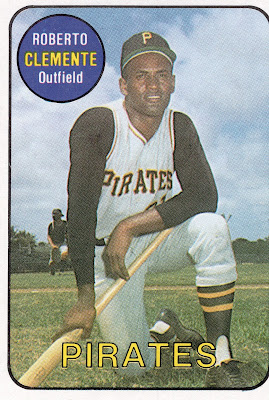 I add Whitey Ford cards to my collection from time to time because he was a favorite of my father. And because I saw him pitch more times than I could count. I can't decide if this shot comes from his playing days or not. Ford had a couple of stints as a coach with the Yankees and I know he spent a lot of spring training time with the team after his retirement. 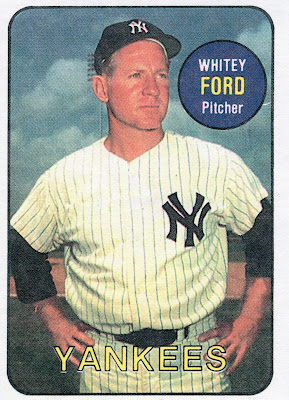 Looks like Yaz' picture was taken on the same day as Ford's. Maybe McCarthy drove from Ft. Lauderdale to Winter Haven one day in the mid-60s. 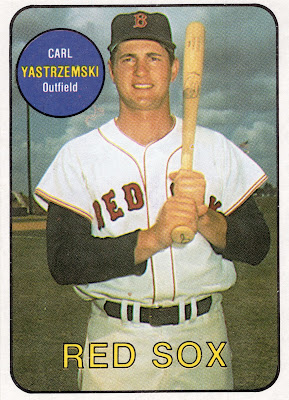 This last one, listed as #1 in the set's checklist is a bit different in that there only the rounded frame mirrors the '69 Topps theme. If you clicked on the Wrigley Wax blog link above you saw that the other duel player card in this set, Banks/Hodges, uses this same design. This one shows J.D. McCarthy himself posing with Ted Williams. I'd never seen McCarthy in a photo so I added this to my 'stack'. 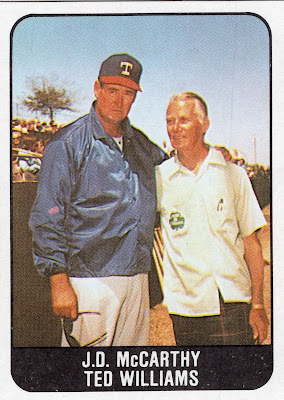 There isn't much online concerning this set. Sports Designs put out a two part set in the years prior to this one. It used artwork by Doug West. It was featured in a couple of posts on The Oddball Card Collector blog.