LOL...Yes, I realize that's probably the least appealing blog post title ever. But it's accurate. I've had these scans hanging around my scan folder for awhile and figured this was as good a time as any to post them. 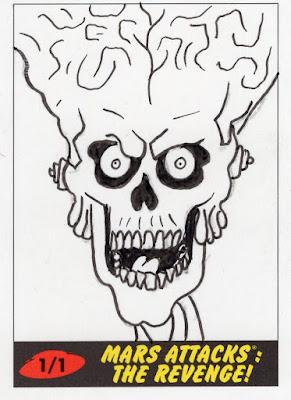 In 2017 Topps did a follow-up to their crowd-sourced Mars Attacks Occupation set. This one, MA Revenge, came as a boxed set with a couple of promised 'hits'. Of course I nabbed one.

I haven't posted anything from it. I really need to pull it out of the box and scan a few because it's pretty sweet. But since these were handy I'll do it backwards..here are some sketch cards I've picked up since the original box arrived.

The 'full size (2x3)' cards are all identical on the reverse. This is the back of the one shown up top. The artist is Dennis Gortakowski whose Facebook page shows that he's done a bunch of work on various Topps projects. 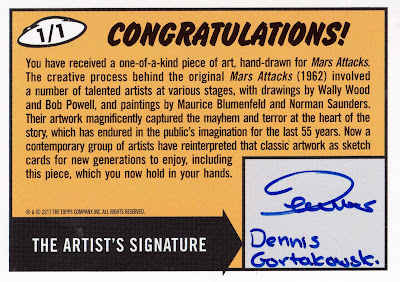 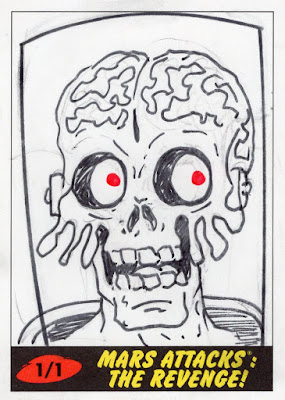 This one is different and it's kind of fun. By Eric Kowalick who has done work on other MA series as well as on a bunch of Star Wars card releases. 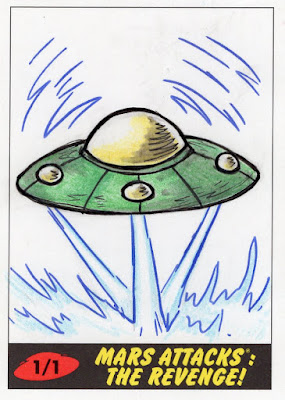 This last one I picked up because it's obviously different than the run-of-the-mill sketch cards. They were called 'shape sketches' or something. Mine is done by Rich Molinelli. Like the others he's a veteran of the sketch card scene having done plenty of work on any number of SciFi franchises. He's more active on Facebook than his actual website.

Well that's a quick look at some pieces of the MA: The Revenge sketch set. I'll get some of the other pieces scanned and posted.

Posted by Commishbob at 8:42 PM