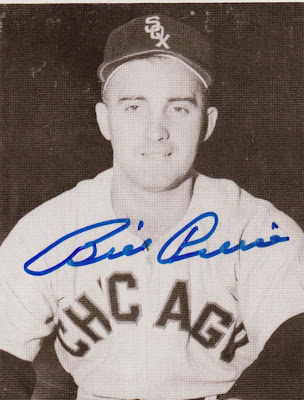 A few weeks ago I got an email from Mike M. who has been reading this blog and was a Billy Pierce fan from Illinois. Mike roots for the Sox and attends the Sox' fantasy camps every winter. He had an autographed Pierce card he wanted to send me and was including a 'bonus' card as well.

Mike's cards arrived yesterday and the Pierce is a TMCA/Renata Galasso signed by BP in his always recognizable (to me) hand. It's a nice addition to my collection. It comes from Galasso's 1977 Series One set of 1950s stars. I have a few scattered cards from several different Galasso sets, mostly Orioles, but didn't have this one. I do now and it's signed! 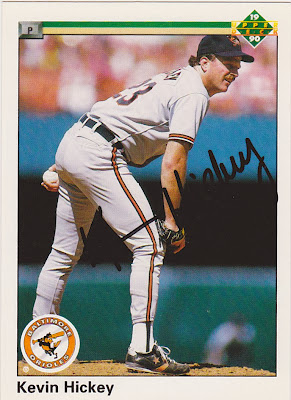 The second card, the signed 1990 UD Kevin Hickey, requires a bit of background. Included in the envelope Mike had a very nice handwritten letter (who takes the time these days!?) explaining how he had met Hickey at several of the Sox' camps. At one he got a clean single up the middle off the lefty who proceeded to whiff him in his next at bat with a wicked curve that broke so far it hit Mike's foot. LOL!

Anyway, I remembered Hickey as a member of the 1989 'Why Not?' Orioles club that finished second in the AL East rebounding from the impossibly awful '88 season. Hickey contributed to that club out of the bullpen with a few wins and saves and an outstanding ERA. His career fell off after that and he was gone as an active player after 1991.

But the true story of Kevin Hickey, who died far too young in 2012, isn't really about his baseball numbers at all. His is a remarkable story of opportunity, despair, redemption and love. If you look at Hickey's record you see that there is a six year gap between his last big league days as a pitcher with the White Sox and his stretch with the Birds. What happened during that gap is only matched in drama by Hickey's tumultuous early life and his discovery as a player for his hometown White Sox (a tryout after being discovered as a softball player). Toss in his post career recovery from homelessness and poverty and his story reads like fiction. But that's not even getting to his work on a major movie and eventually to becoming a wildly popular BP pitcher for the White Sox. So popular, in fact, that the team voted him a full share of the championship winnings in 2005.

If you never read any other link I post on this blog I urge you to click through to this remarkable obit/tribute/remembrance that appeared in the Chicago Sun-Times after his death.

So thanks again, Mike M., for sending the cards my way and for opening my eyes to the both heartbreaking and inspiring story of Kevin Hickey. I hope you are enjoying camp and can get yourself another single up the middle. But lay off the big curve.
Posted by Commishbob at 12:30 AM