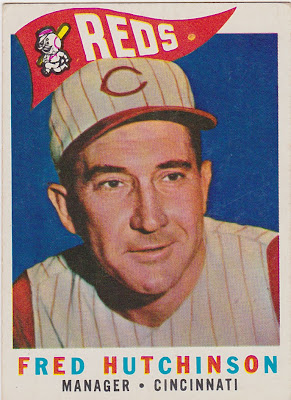 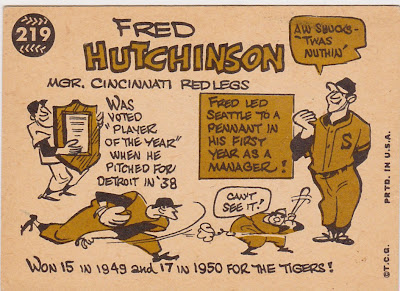 It's been awhile since I posted any of my 1960 Topps managers cards. I had this one in the draft folder and had forgotten that it was never published. It really had never even been started except for the scans. This post features two revered and accomplished managers. Let's start with Fred Hutchinson.

"Hutch" as he was called began his baseball life as a sensational 19 year old pitcher with the PCL Raniers in his hometown of Seattle. He won 25 games that first season and was named as Minor League Player of the Year by the Sporting News. After that his contract was purchased by the Detroit Tigers and Hutch got a pair of brief looks at the majors and he had another fine minor league season in 1941. But the Uncle Sam called and he spent four full years in the U.S. Navy.

Once back in civilian life in 1946  Hutch ran off a string of major league seasons with the Tigers that saw him rank near the top of several pitching categories. He went 87-57 between 1946 and 1951. He faded quickly as an effective pitcher but not as a leader and the Tigers named him manager in mid 1952 and he continued as a playing manager through '53. He managed another season before he was let go and he returned to Seattle to manage the Raniers to a 95 win season.

He was hired to manage the Cardinals and held that spot through 1958. He again managed the Raniers for a season before the Reds hired him to finish out the 1959 season. In 1961 he led the Reds to the national League pennant and a World Series match-up against the Yankees. The Yanks won it in five games. Hutch remained at the helm of the Reds until 1964. It was during that season the he was diagnosed with lung cancer that had spread to his head and neck. He left the club in July, returned for a week or so and then left for good, too ill to work. He died that winter.

The Fred Hutchinson Cancer Research Center was founded by his brother Dr. Bill Hutchinson and is now one of the top facilities of it's kind. You can read more about Hutch on these two pages on the facilities' excellent site..... this page is an excellent bio of the late manager and this page discusses the Hutch Award given each year by MLB.. 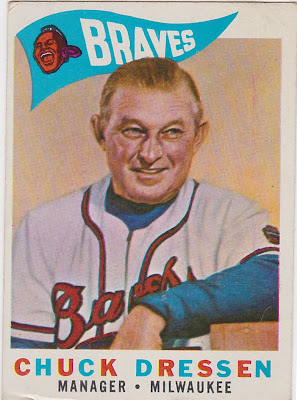 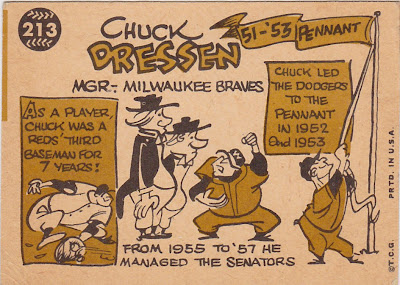 Chuck Dressen left Decatur, Illinois to play third base for the Reds through the mid-1920s. But those playing days came after his three season career as a back with the Decatur Staleys and Racine Legion in the NFL between 1920 and 1923.

Once he switched to baseball he remained in the game until his death in 1966. Once his playing days were over, at age 39, Dressen was selected to manage the Reds in 1934. He spent 16 of the next 32 years managing five different clubs. His most success came in 1952/'53 when he managed the Brooklyn Dodgers to the World Series. His major league managerial record was 1008-973. Dressen passed away following his last season as manager of the Tigers in 1966. His final two years were hindered by ill health.

While managing his Dodger clubs Dressen would often tell his team, "Just hold them, boys, until I think of something." He was also credited with bold predictions while managing some talent starved Washington clubs. Lots of good info and stories on his Wikipedia page.

Here is a selection from a September 1952 showing of the TV game show 'What's My Line' featuring Dressen on the eve of the 1952 Series in which he managed the Dodgers versus the Yanks. Interestingly he gets into an exchange with one of the panelists, newspaper columnist Dorothy Kilgallen  over something she had previously written about his managing.