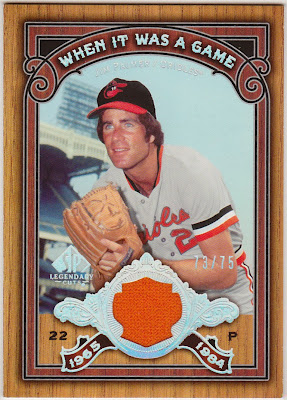 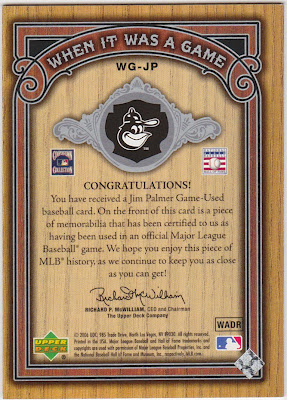 When I got back into collecting the whole "game used relic/patch/strand of Ruth's hair in a card" thing had pretty much died down. At least I think it had. My hobby knowledge and history is very hazy when it comes to the last two decades. Kevin at Orioles Card 'O' The Day was the first blogger I became acquainted with and he could confirm this. I remember emailing him a couple of summers ago to ask what the heck a 'blaster' was!

But to me in 2010 getting a piece of a jersey that a major leaguer had worn was new and interesting. I've picked up a few along the way. I certainly haven't gone overboard but I enjoy having a swatch/relic (are they the same?) card of a player I admired and rooted for.

Upper Deck made some really nice cards before they lost the ability to issue MLB cards. It's a shame that they no longer part of the deal. These two cards are part of my collection of favorite pitchers. They are both from 2006 and while they have different details they look very much the same in concept and design.

Jim Palmer, of course, is a great favorite of mine, so much so that one of my sons is named for him. I've related some of those stories before so I won't do it again now. I've seen that picture of Palmer before but not to the point that I'm sick of it. I like the Yankee Stadium facade in the background, too. Combine that with a woodgrain patterned card and it was a keeper for me.

The next one is a Bob Feller from the same or a related set. I walked into a Houston area mall many years ago and came across Bob Feller signing autographs on behalf of  one cause or another. I seem to recall that the sigs were free with a charitable donation that got you a Feller 8x10 with the charities logo at the bottom. I kicked in the $5 or so, got my picture but didn't wait in line to get it signed. I think I was in a hurry. That 8x10 is around here someplace.

Bob Feller won 266 games in his career even though he lost nearly four seasons to military service. And those were seasons in the heart of his prime. Consider this.... in the six seasons that bracket his his military service, three years before and three years after, Feller averaged 23.5 wins. That's just flat out ridiculous. Anyway, here's the card: 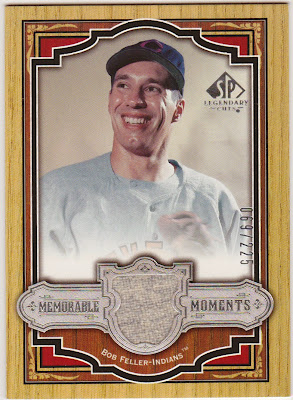 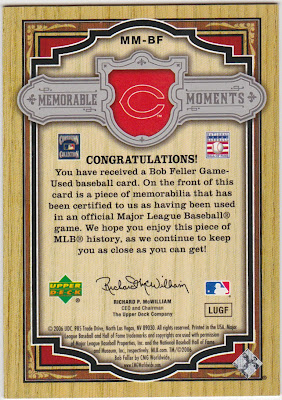 Again, pretty sweet I think. Feller always seemed to be smiling, at least that's how I remember him. Nice old-timey-feeling gray road uni patch, too.
Posted by Commishbob at 6:30 AM