edit: I meant to post this back on the 4th of July but you know how that goes. 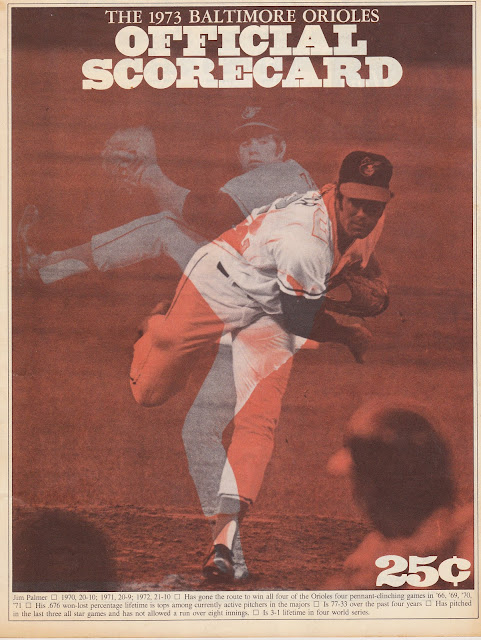 On the 4th of July in 1973 a kid went to see the Orioles play the Brewers at Memorial Stadium. His father bought him a program and the young fan scored it. Turned out to be a pretty interesting game. The Brewers cuffed Mike Cuellar around and led 5-0 going into the bottom of the sixth. The Orioles rallied and scored 3 in the sixth and four in the seventh (including a two run homer by Earl Williams) to take a two run lead into the eighth.

'Closer By Committee' members Eddie Watt and Bob Reynolds proceeded to give the lead away and the game was tied going to the bottom of the eighth when the Orioles' suddenly awakened bats continued their onslaught and they scored three more to go up 10-7. The inning was highlighted by a Paul Blair single driving in two. Reynolds managed to hold that lead and got the win.

The fan (and you can tell it's a kid by the handwriting) scored the game using a rather rudimentary system consisting of 'O', 'S', 'D', 'HR', 'SF' and 'SO'. Not very elaborate but I can follow the game with it. I remember using a similar 'system' when I was first scoring games at the ballpark. 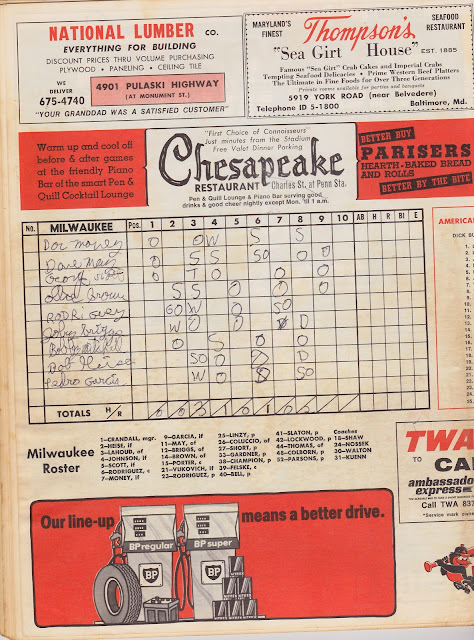 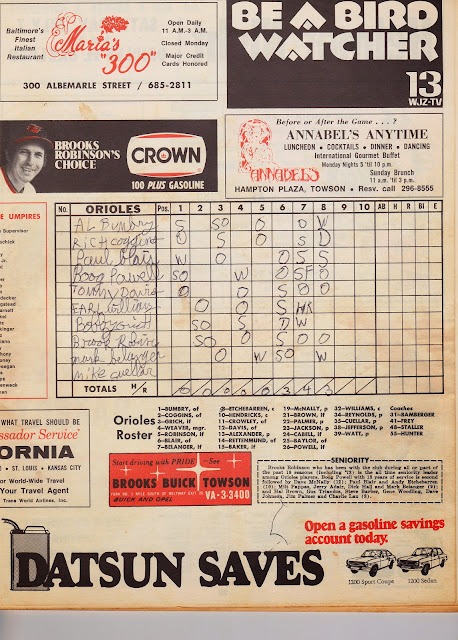 The program is 36 pages long including the covers. That's pretty good for .25 even in 1973 terms. There was one feature story, that being the "American League Innovation..." Of course they are referring to the DH. The rule itself is explained on the second page of the feature and a photo layout of potential DHers. 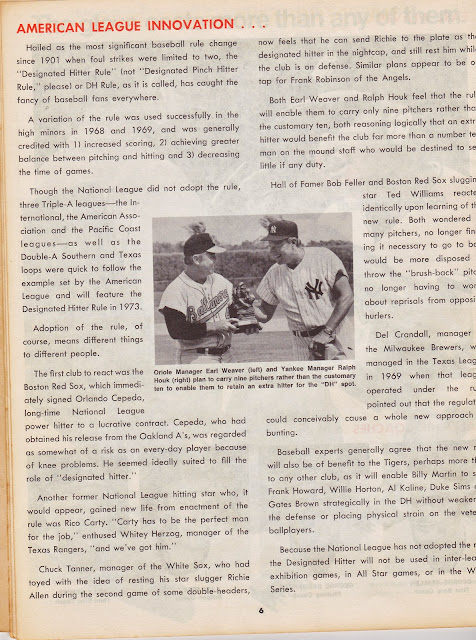 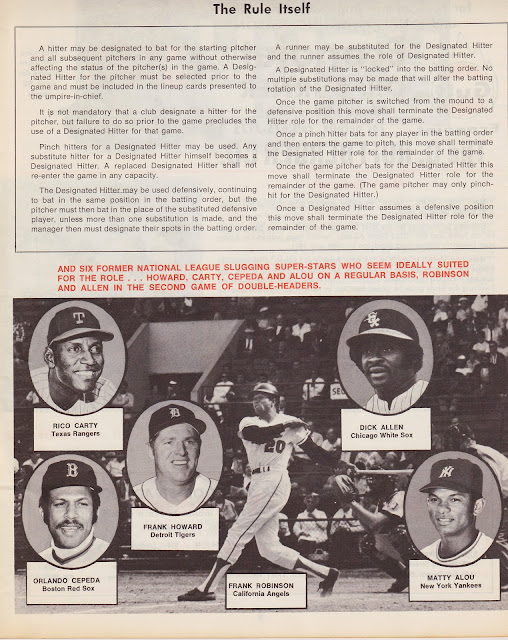 Some thoughts on that photo montage..... I never think of Frank Howard as a Tiger, ever....I love the picture of Frank Robinson in his Orioles duds though he's listed for his new team, the Angels...... the heading above the picture claims that these are "six former NL slugging super-stars who seem ideally suited for the role..." and it goes on to name four as regular DHers and points to Robby and Dick Allen as guys who will DH in the second game of doubleheaders. (For you kids that is when you got to see teams play two games in a day for the price of one ticket.) If i had the time and energy I'd like to scour the BR boxscores to see if and when those two actually fulfilled that role.

The rest of the program is typical of the era (and today as well for the most part). there is a shot of Earl Weaver in his usual pose, pointing out the error of the umpire's ways. And individual shots of what had to have been his always bemused coaches. 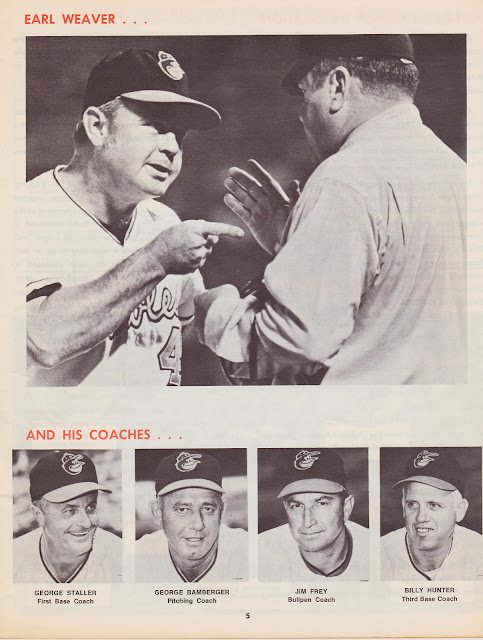 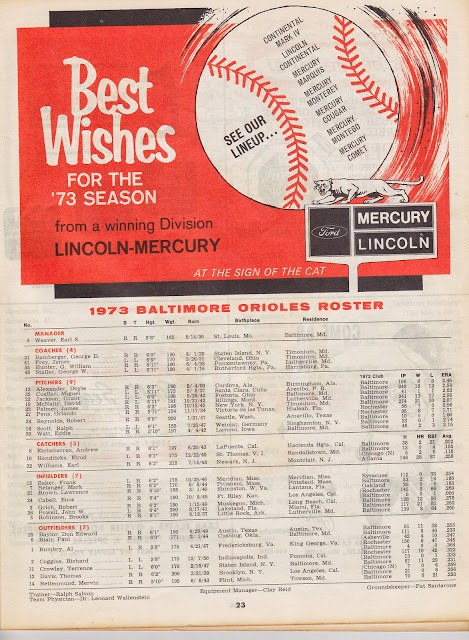 A feature on Brooks Robinson above which is an ad for the Purdy Steak Company. The ad trumpets Purdy as the "National Champion of processed portion meat products." That may be the single worst marketing slogan of all time and may explain why the company is long gone. 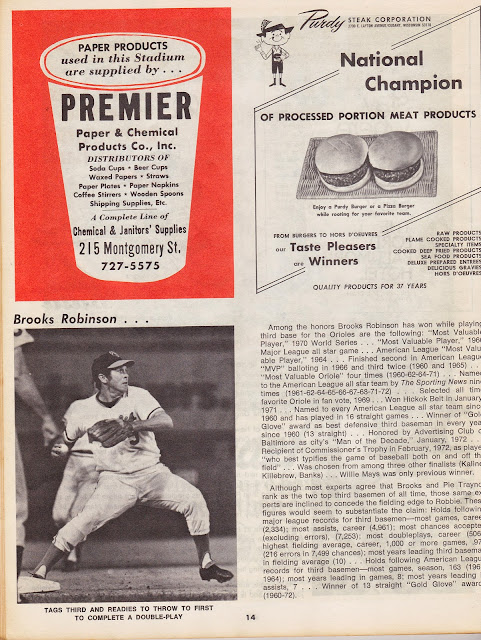 Not a bad starting rotation: 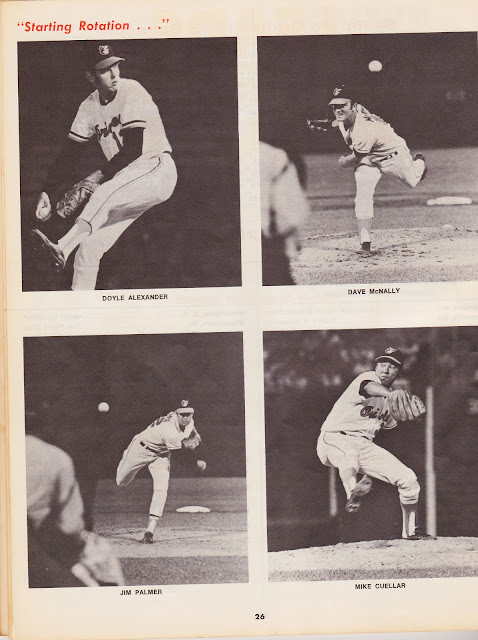 Food and souvenir prices were listed on one page. Crab cakes went for half a buck. I figure I ate about $100 worth of those babies in my visits to Memorial. 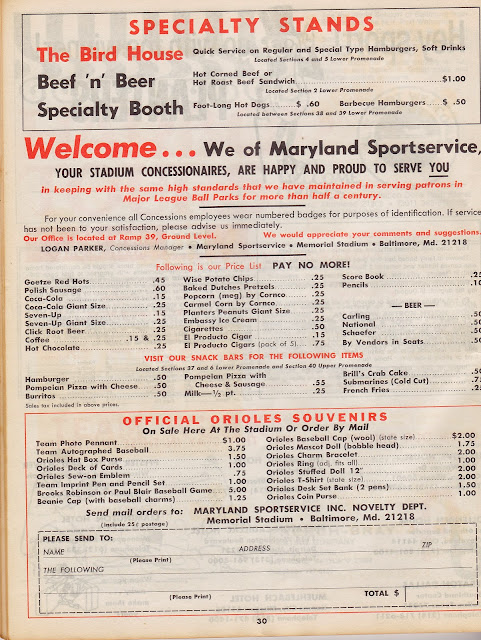 And what would an Orioles' publication be without a Natty Boh ad on the back cover? 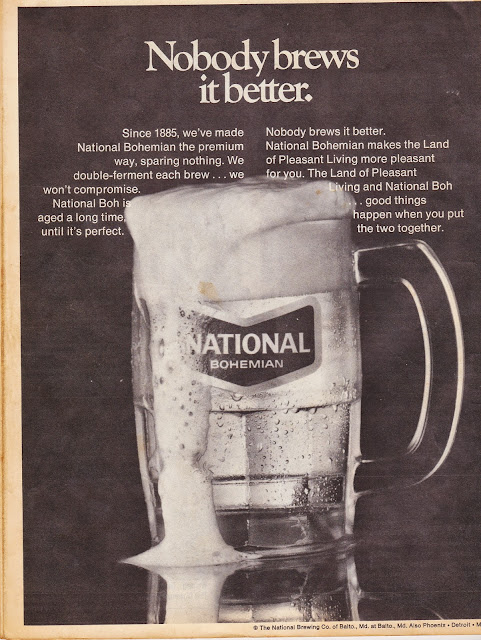